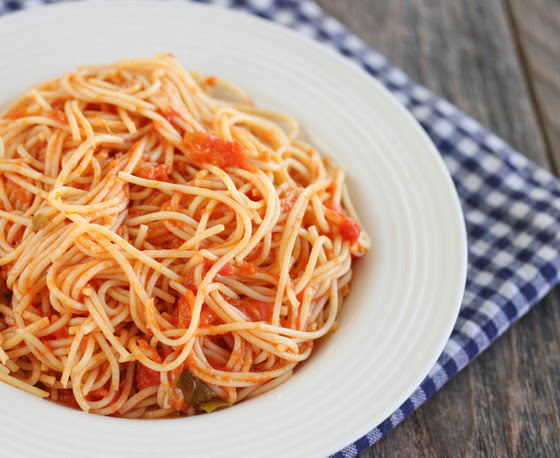 Chef Scott Conant’s tomato basil spaghetti is my favorite spaghetti of all time. It’s actually one of the best bites I’ve ever eaten. It might seem strange than I’m making such a big declaration about something as simple as spaghetti. I would have thought the same thing until I tasted it at Scarpetta.

It’s hard to describe, you really just have to try it out for yourself. The fresh and thick pasta noodles are perfectly cooked. The sauce is slightly spicy, very creamy, and not like any other tomato sauce I’ve ever eaten. Chef Scott Conant’s recipe seems to transcend the tomatoes. The sauce lacks the acidity and tartness of normal tomato sauces and is more an orange hue rather than red. 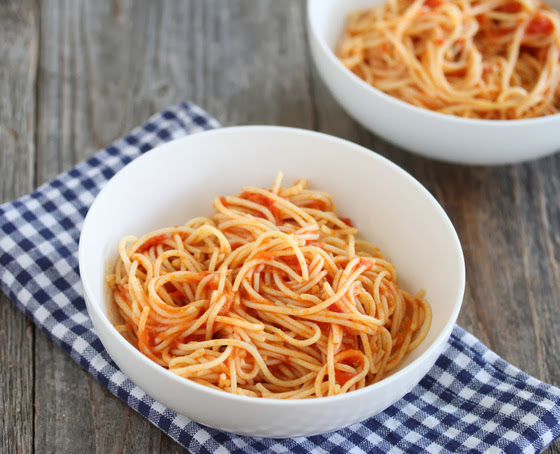 Since we can’t afford to eat at Scott Conant’s restaurant, Scarpetta, all the time, we began making the spaghetti at home. I’ll admit, our homemade version never tastes quite as good. But it’s still a pretty good spaghetti sauce and our “go to” one when we have too many tomatoes in the house. 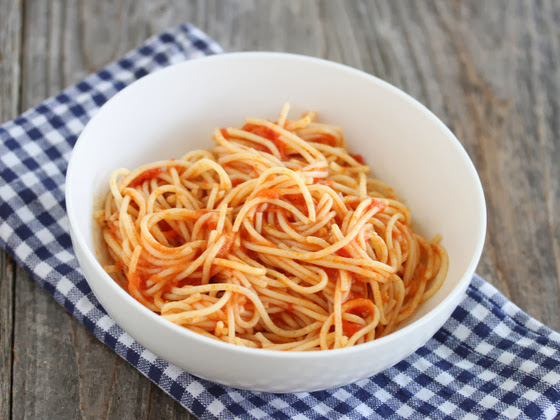 I previously had my siblings to help with the labor. The recipe is actually not that hard, but the peeling and de-seeding of the tomatoes is a little time consuming. This time around I only had Mr. K. I convinced him to help me out in the kitchen. Of course, “helping” meant he peeled about 5 while I peeled 15. Oh well, it’s the thought that counts right? 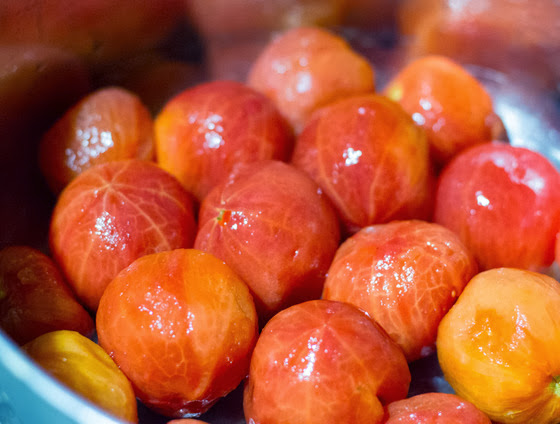 Our peeled tomatoes ready to be halved and de-seeded.

I like to make a big batch whenever I make this, so there are a lot of leftovers. You can view the full recipe here. One note, the recipe includes canned tomatoes, but Chef Conant suggests using all fresh if possible. So we used 20 fresh tomatoes and no canned ones. 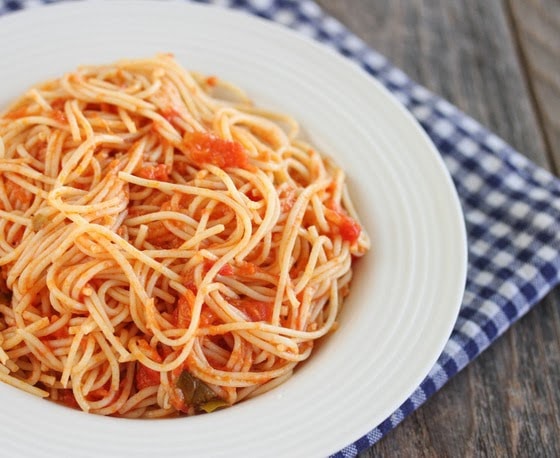 Servings: 2
Prep Time: 15 minutes
Cook Time: 1 hour 15 minutes
Total Time: 1 hour 30 minutes
Course: Main Dishes
Cuisine: Italian
Chef Scott Conant's tomato basil spaghetti is my favorite spaghetti of all time. It's actually one of the best bites I've ever eaten and because I can't afford to eat at his restaurant every time I'm craving his spaghetti I make it at home. It's especially great during the summer when tomatoes are in season.
Print Pin Rate

How to Make the Sauce

How to Make the Pasta

Did you make this recipe?I'd love to see it! Mention @KirbieCravings and tag #kirbiecravings!
Posted in: Main dishes, Recipes
3 Comments // Leave a Comment »