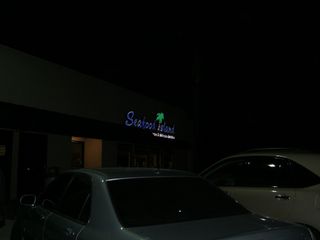 This place opened a few months ago, and I keep passing by it whenever I’m on Miramar. I finally had a chance to try it this weekend, when my guests came to visit.  The restaurant is pretty big, and it has a lot of round tables with lazy susans, perfect for large groups of people and for family-style eating.

The menu is pretty extensive and offers a wide variety of food from vietnamese to chinese to korean bbq.  My group decided to stick to mainly chinese dishes, with a couple of vietnamese dishes thrown in as well.  The service was pretty good.  And the food came out fast! Almost as fast as the pho places I go to.  The prices are very reasonable and all the food tasted pretty authentic.  The size of the dishes were pretty big as well.  With so many dishes on the menu, I will definitely be back to try some other items.

Here is some pictures I took of the menu.  It was hard to fit the whole page on the camera screen, so some items may be cut off:

Now, onto the food we ordered!

Vietnamese eggrolls.  There are four eggrolls in an order, and we had two orders.  I found these eggrolls to be slightly on the dry side.  I like the ones at Pho Cali on Clairemont Mesa better. 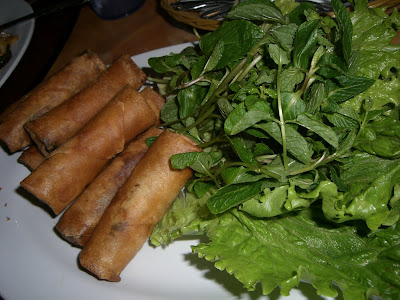 House special seafood fried rice:  The rice has an interesting blend of flavors.  Definitely not chinese style fried rice.  But it was tasty.  It also contained shrimp and squid cut up into small pieces and also some pineapple.  Not everyone at my table enjoyed the flavor of the fried rice dish though. 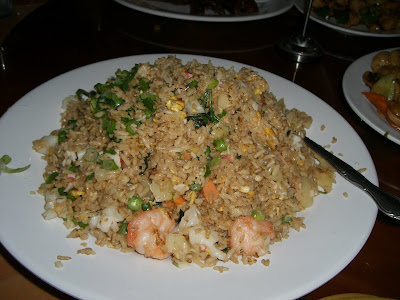 Crispy quail.  We were given six halves.  The picture on the menu showed a lot more, which is a bit deceiving.  Luckily, some people in our group didn’t want to try the quail, so there was enough for everyone who wanted one to try it.  The quail tasted pretty good. I love the taste of fried quail.  It wasn’t too dry.  I just wish there were a few more pieces…

The menu shows this for Crispy quail: 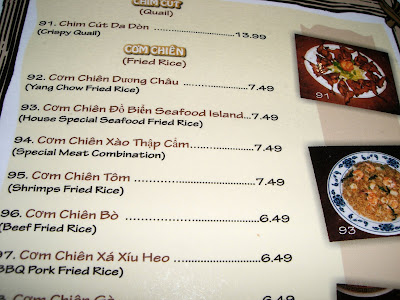 Instead, we were given this: 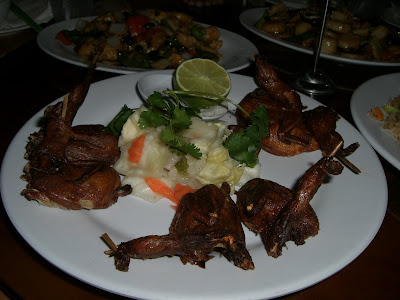 Fish with black bean sauce: one of my boyfriend’s favorite dishes.  He loves how the peppers and onions taste after being cooked in the bean sauce.  It wasn’t the best I’ve had, but it was a pretty decent version of the dish. 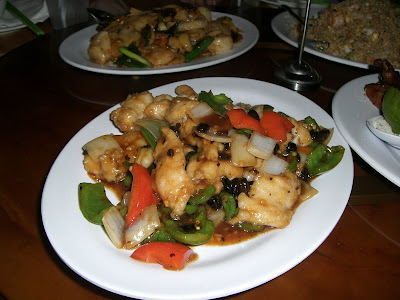 Garlic sauce scallops.  It looks a lot like the black bean sauce fish, but doesn’t taste like it.  I was surprised by the sweetness of the sauce used.  A little too sweet for my taste.  It tasted sweet and garlicy.  I would have liked to see bigger pieces of scallops.  The scallops were sliced thinly and the dish had a lot of water chesnuts and other vegetables and not that many scallops. 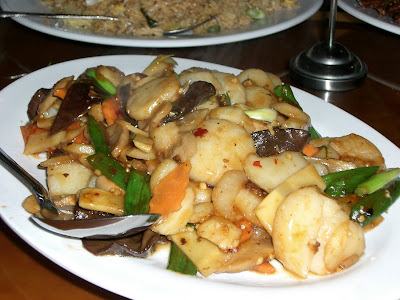 Stir fried on-choy.  On-choy is a leafy asian vegetable with crispy stems. I love it.  The menu gives you a choice of chinese style or vietnamese style.  I’m not sure what vietnamese style is, so we played it safe and stuck with chinese style.  A little bit too oily, but that tends to be the case when restaurants stir fry the on-choy.  I would like to see a restaurant who can manage to make this dish taste good and not be too oily.  However, other than being too oily, it was good. 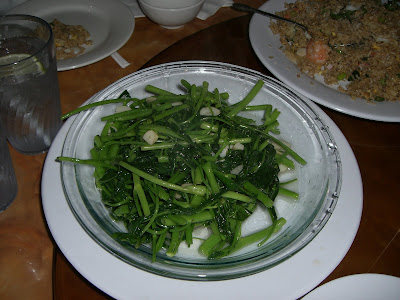 House Special Sirloin Top Crunch: It was a cooked beef chunks served on a bed of raw onion, tomatoes and lettuce.  We weren’t sure what the “crunch” in the dish was supposed to be.  Were we supposed to eat it with the raw onions?  The meat was very tender and not overcooked.  The dish was a bit too simple for my tastes.  I felt like it was something I could make myself very easily.  I think it was just cooked with cornstarch, salt and pepper.  Other than that, it was tasty. 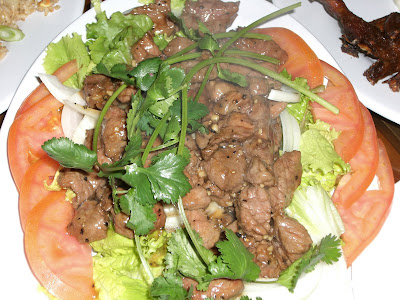 Overall, pretty authentic food, reasonable prices, and good selection.  I was eyeing the peking duck on the menu and a few other dishes. I’ll definitely be back to try some more.