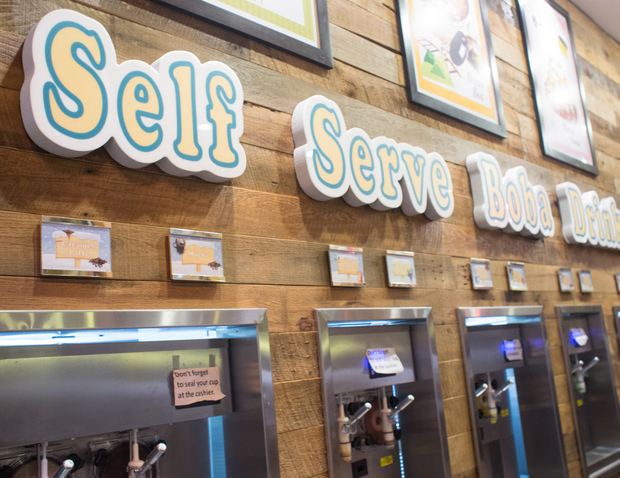 Class 302, a Taiwanese cafe with several locations in Southern California that is known for their snow ice and classroom-themed setting, recently opened a new location in Irvine Marketplace. This one not only serves meals and their popular Taiwanese snow ice, but they also offer self-serve boba drinks.

It’s the first I’ve seen in the US and it’s brilliant (I’m guessing the idea already exists in Taiwan, since most of the trends you see at the Taiwanese cafes here usually come from Taiwan).

First, you choose a cup size (small or large) and pay for it. The “small” is actually really big. The cup is extremely wide (doesn’t fit in your car cup holder) and we were commenting that we couldn’t fathom people getting a large because we were barely able to handle the small. Two of my friends actually split one small.

They give you the cup and then you go off to to make your drink. 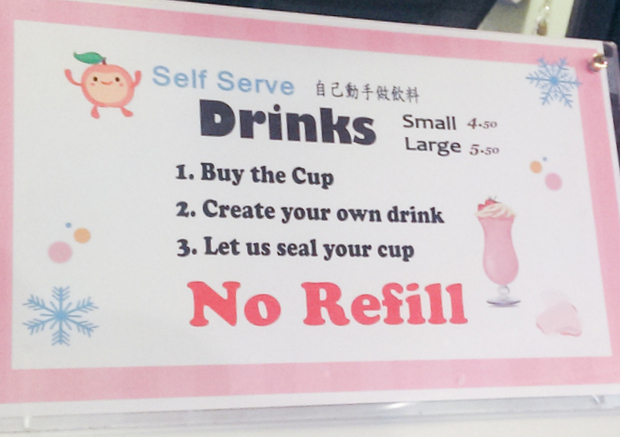 Toppings are at a counter (about 16 options), soda fountain dispensers are filled with popular milk and flavored teas (about 13), and frozen yogurt machines are churning out flavored slushes (about 12). It’s basically an entire boba tea menu at your disposal. 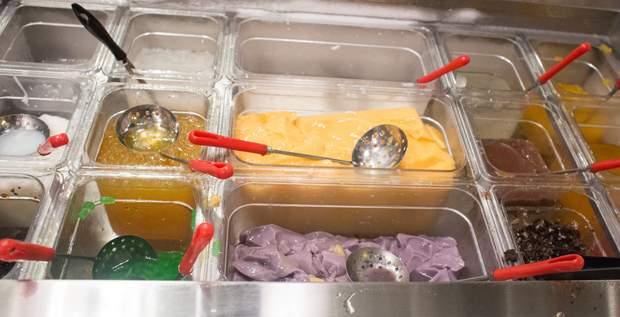 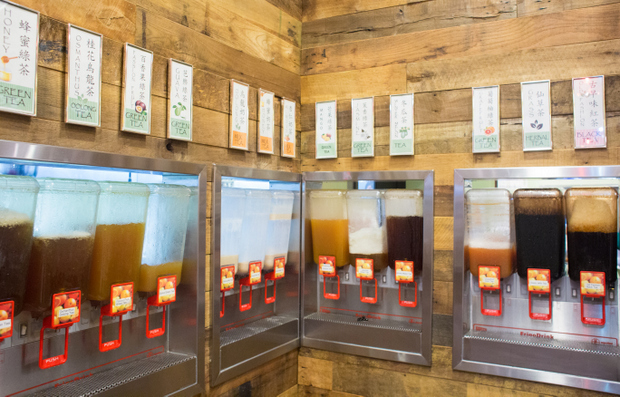 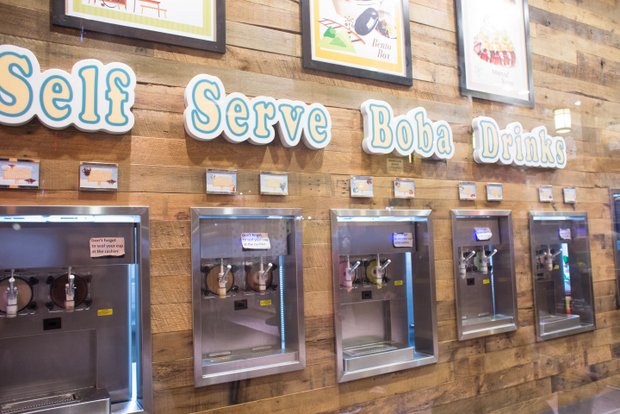 Once you are done making your creation, you carefully make your way back to the register (because of course you’ve filled it all the way to the tippy top) and they seal it for you and then you are set. At this point you may take a selfie with your drink (at least that seems to be what everyone else was doing), so your friends can be jealous that you are at a self-serve boba place.

I wish I had taken some photos before sealing the drinks because it was easier to see all the additions, but it was crowded in there, so I waited until after we were seated. 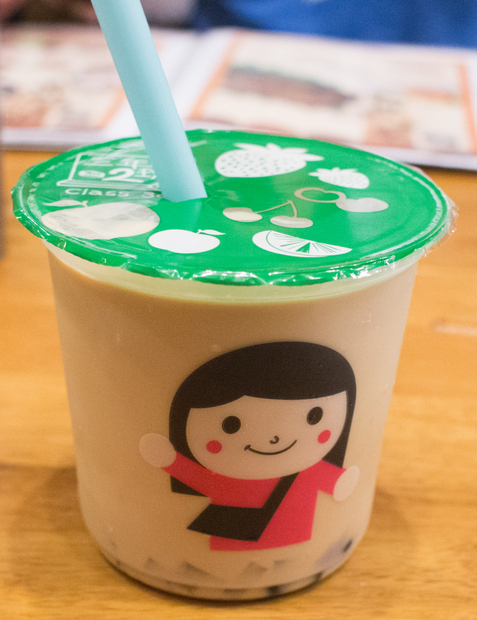 Yes I went a little crazy, but it still tasted pretty good. 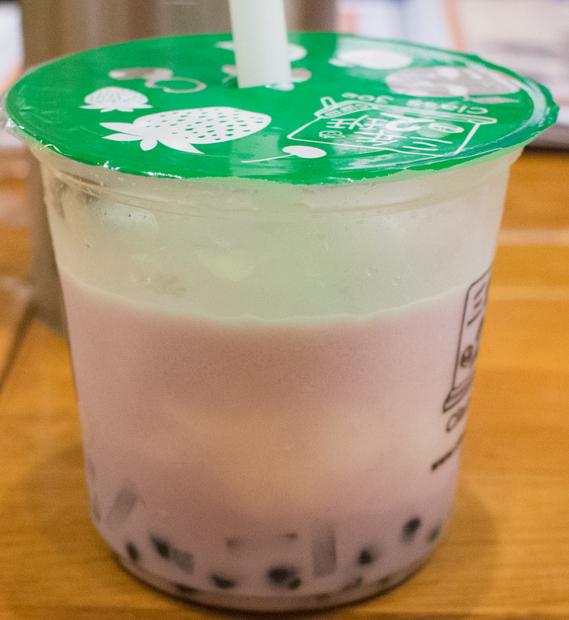 This one actually came out quite pretty before it was sealed because you could see all the layers (also this photo is after they drank some). My friends did say it was too sweet though to add slushy to the sweetened tea. But I really liked the idea. I’m going to try something similar next time, but use a less sweet tea. 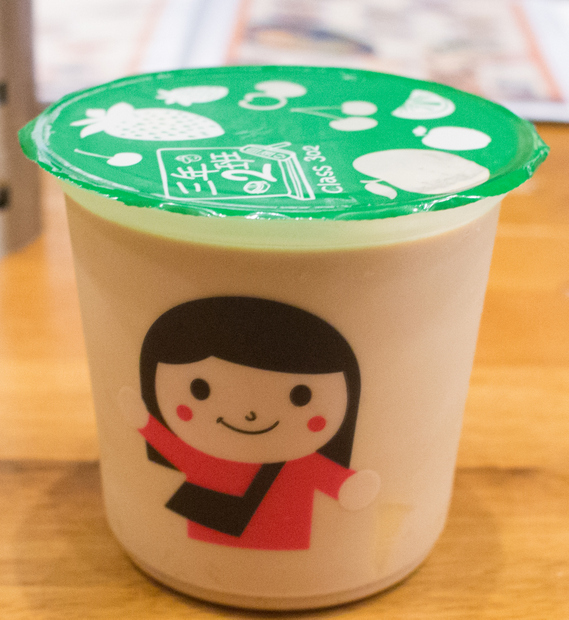 Mr. K went the least crazy with his. 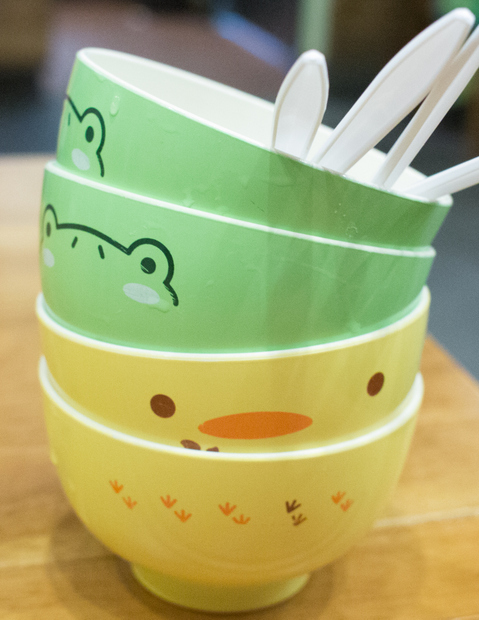 While we were there, we decided to dine-in and get some snow ice. 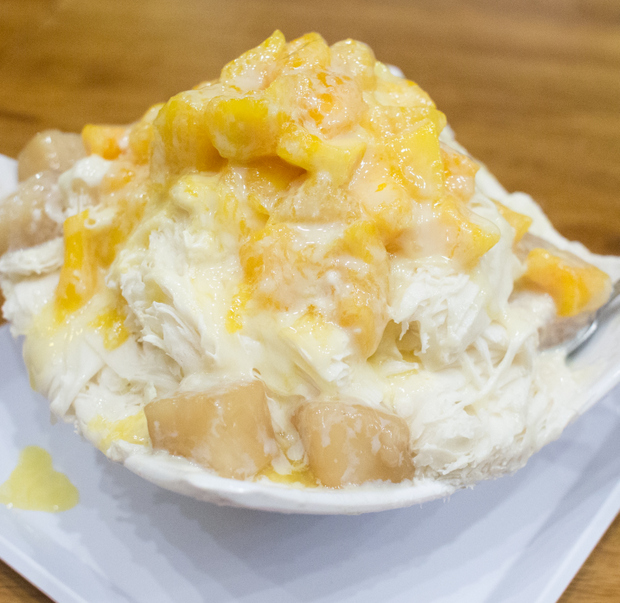 This is our favorite combination. It’s their golden mango snow, which normally is mango flavored ice, mango, mochi and condensed milk, but we substitute the mango snow for milk snow. 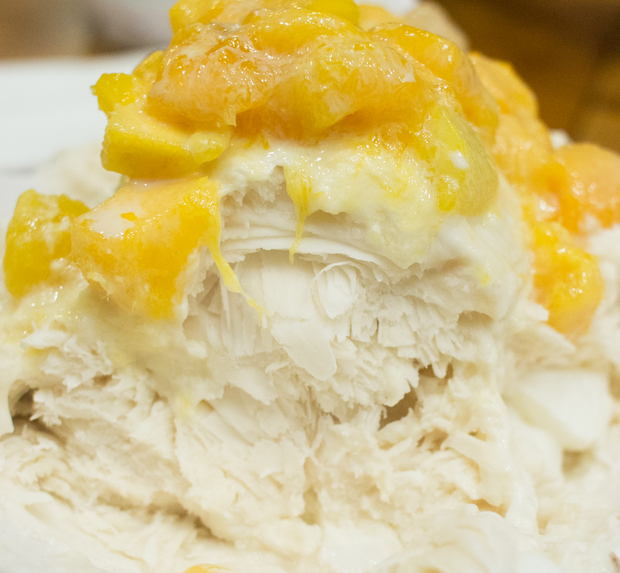 I love all the layers here. The snow ice here is really creamy and it takes a very long time to  melt. In fact, we were here for almost an hour and we weren’t able to finish the green tea but it barely melted. 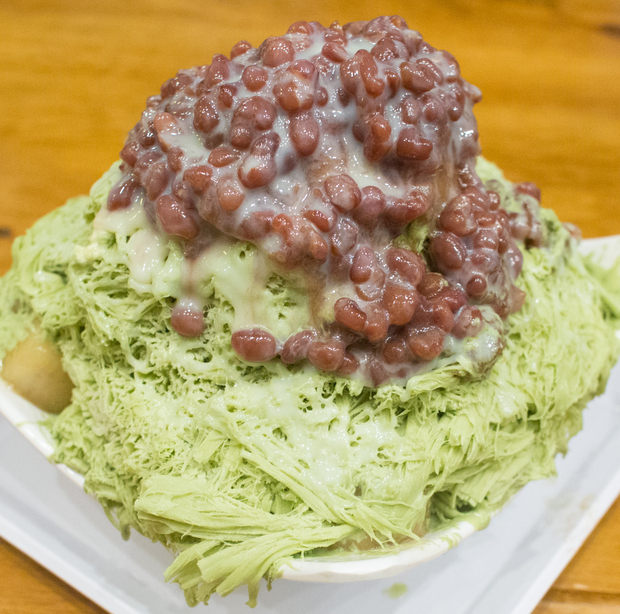 Our two friends ordered this one. I like the green tea ice, but I don’t really care for red beans. 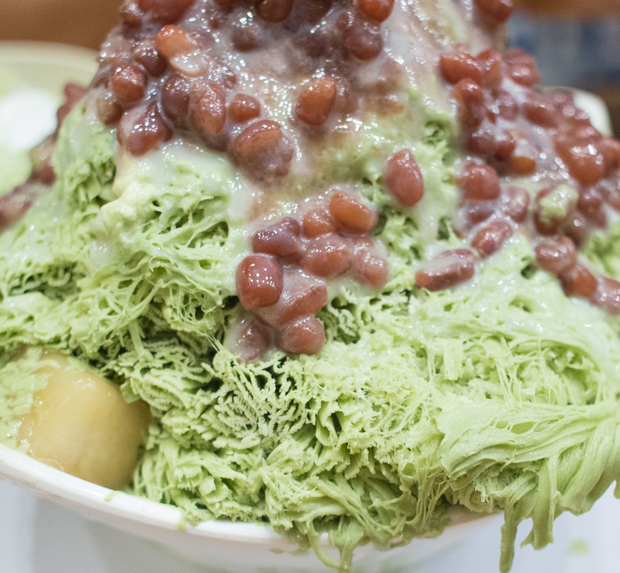 Overall, we had a good time here. I really love the new self-serve boba concept. I like the customization and it was faster for me to make my own than wait for them to make mine. There is less dining space here because of the boba bar, but we also noticed there were less people eating-in, with most people just here for the boba drinks. The school desks which they use for tables and chairs in their classroom theme also seem a little wider and taller compared to the other locations, making them slightly more comfortable.

1. This place is Cash only

2. This is the only Class 302 location that has the self-serve boba option.

14 comments on “Self Serve Boba Drinks at Class 302 Cafe”