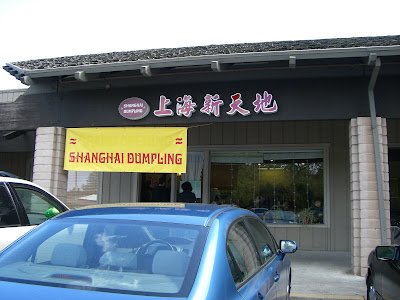 While this place doesn't compare to the Din Tai Fung restaurants I visited while in Taiwan, this tiny little restaurant does make some tasty little pork soup dumplings aka Xiao Long Bao.  You know they are homemade because you can watch them being made.  There is always a girl, with her hair in two long braids, standing behind a clear glass counter, making the dumplings.  Sometimes, the owner comes out to help her. 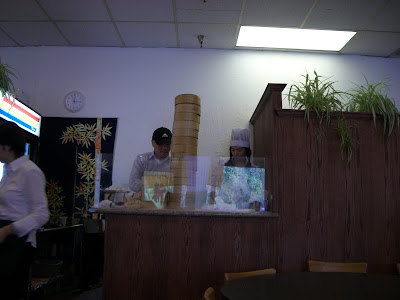 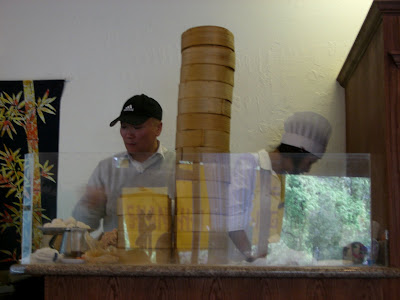 This restaurant used to go by a different name and had a bigger location.  I don't remember the name.  My family used to frequent the restaurant for both its dumplings and its other dishes.  However, they closed down over a year ago.  At some point, my parents heard they were opening a new, smaller location.  They searched for it, but didn't find it.  When I went home for Christmas, I met up with a friend who had found Shanghai Dumpling through yelp.  We went to check it out, and the first thing I noticed was the girl with braids making the dumplings!  I told my parents about it, and they were excited.  They told me that they had been searching for the place for months.

My family went to Shanghai Dumpling this weekend while I was home.  This place serves various dumplings, along with other classic Shanghai dishes.  Here is the menu:

The restaurant is small and always seems to be packed.  It can only seat about 40 people.  Apparently this place has generated a lot of buzz for their pork dumplings, based on the reviews I've seen on yelp.  Also, while we were there, the table next to us ordered ten orders of the dumplings!! Ten!! On top of other food.  They had apparently driven an hour just to come eat the dumplings.  I don't think they are good enough to drive an hour for, but I do enjoy their dumplings along with their other dishes.  Here is the menu:

Since we had so many people, we ended up ordering from the group family-style menu.  I don't think they have this menu in English.  Here is the chinese one for those who can read. 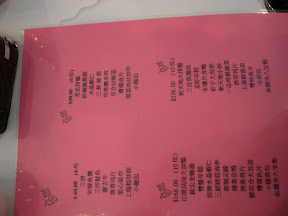 We ended up going with the 10-person meal for $168.  I'm not sure how their dishes are if you order individually off the menu, but the quantities were pretty big for the 10 person meal.

Up first were the famous dumplings. 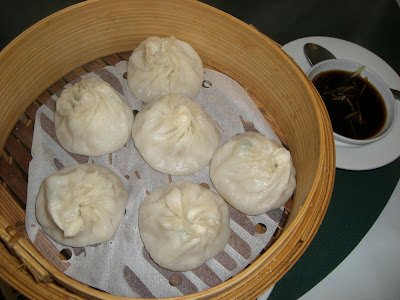 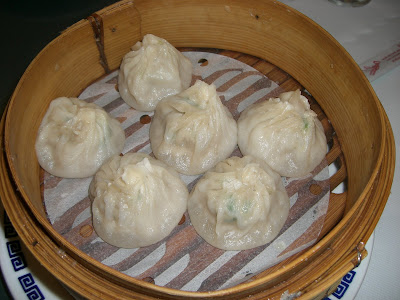 The skins of the dumplings are very thin, which is hard to find in XLB because then the skin breaks easily.  Inside, each dumpling had a lot of soup and a good portion of meat.  The meat is not as flavorful as the ones I had in Taiwan at Din Tai Fung, but they are still fairly tasty. 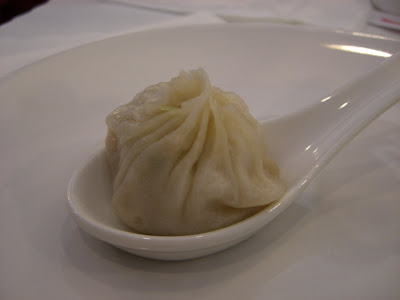 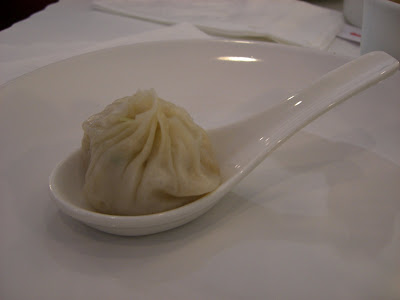 Next up was the House Special Duck Soup 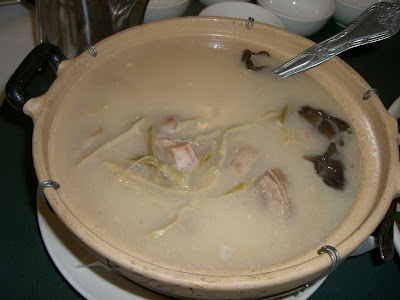 The broth was not as rich in duck flavor as I
would have liked.  Inside the soup is bits of duck, bamboo strips, taro and black fungus.  While the pot had a lot of pieces of duck meat
in it, they weren't tasty.  All the taste had been cooked out of the
duck, and yet it did not transfer into the soup.  I did enjoy the long
pieces of bamboo and the taro chunks.  The taro was subtly sweet inside
the broth.  Here is the pot after some of the broth was taken out: 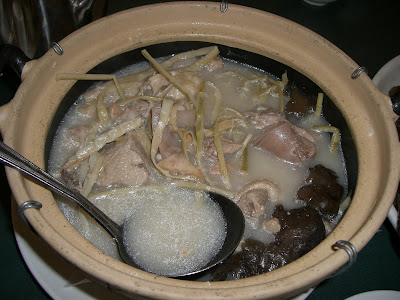 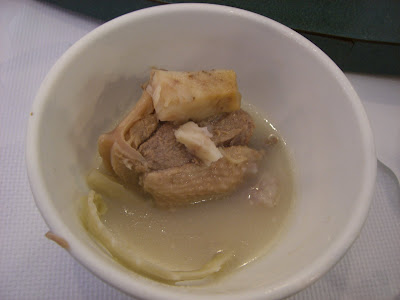 Next came the cold appetizer platter. 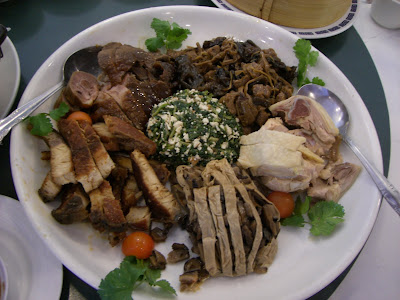 I was impressed with the variety of items and how tasty each of them were.  Everything tasted good.  From bottom going clockwise there is a vegetarian bean curd stuffed with mushrooms, smoked fish, marinated duck, bamboo and mushroom mixture, chicken with wine sauce, and in the center is a mixture of bean curd skin and beans and pickled green vegetables. 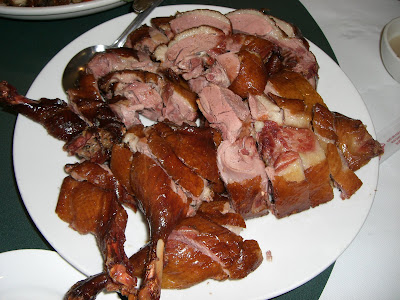 Big, juicy pieces of duck meat.  However, I was not impressed with the taste.  The duck is supposed to have a salty, smoky flavor.  The pieces of meat were generous, but the duck was not very smoky and had bit of a sour aftertaste. 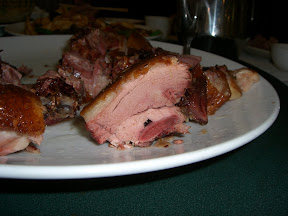 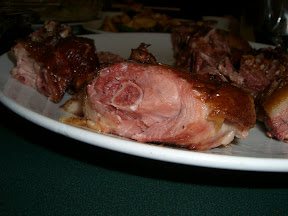 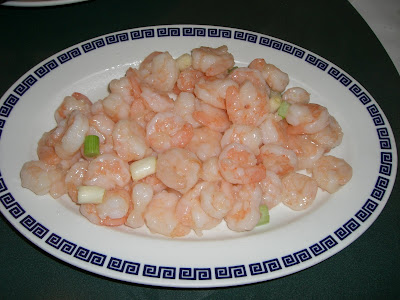 A very class Shanghai dish.  This dish was simple and made well.  Very yummy and pretty.

One of my favorite Shanghai dishes.  The fish tastes great in the wine sauce.  The hints of wine add a great dimension to this dish. 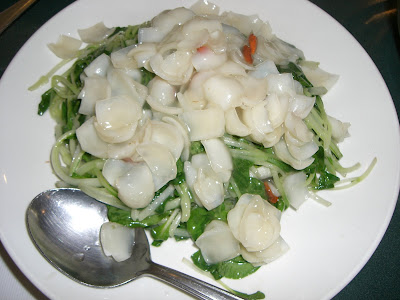 I thought I would enjoy lilies, but apparently not. They look like onion pieces and taste like onions without the strong onion taste.  They don't have much flavor and neither did the vegetables.  My mom was also annoyed that they replaced the vegetable.  The dish is supposed to use big green sprouts which are expensive right now as they are not in season.  They didn't say anything and replaced it with a cheaper vegetable. 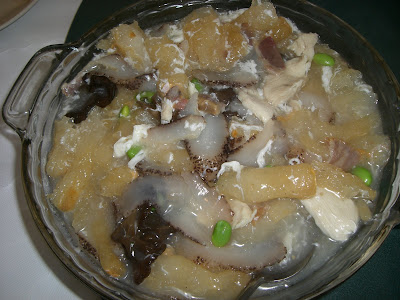 The pork tendons are fried in this dish.  They came out soggy though, so it tasted a bit like a spongy tofu skin rather than tendons, which should be somewhat chewy. 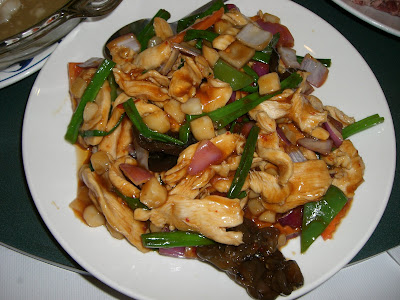 Not my favorite. I don't really like kung pao chicken.  This version was okay, but didn't stand out when compared to the other dishes we had. 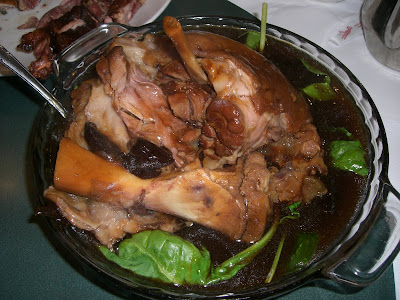 Another classic Shanghai dish and one of my favorites when made well. The meat should be falling off the bone, and not dry.  This meat was tender and cooked just right in a sweet sauce. 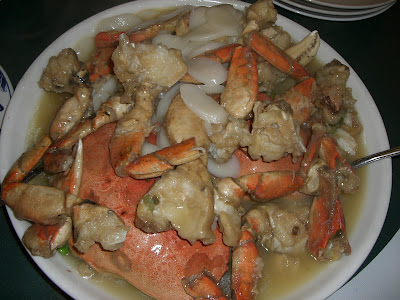 They changed our plates before this dish, which was a nice touch.  The sticky rice cake (usually served and used like noodles) tasted amazing with the crab sauce.  Very rich tasting.  The crab itself was tasty but messy to eat. 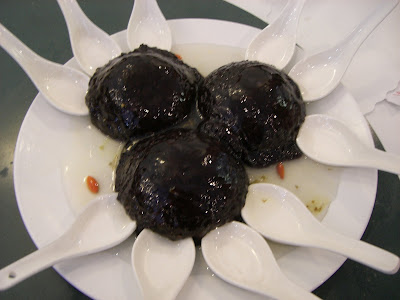 They used purple rice for this dish, which I like.  However, the only filling inside was bean paste.  I would have liked to see more ingredients.  Also the rice wasn't very sticky and was a bit on the mushy side.

< p>Overall: Pretty good, authentic Shanghai food.  The pork dumplings are above average.  I heard that the crab dumplings taste much better.  I didn't have any on this trip, maybe next time. The service could be a little better.  When I went during Christmas for dinner with my friend we got virtually no service.  We had somewhat better service today, but I think they still could have been a bit friendlier, especially since my family goes so frequently.