Snow’s BBQ is the #1 ranked barbecue joint in Texas according to the current Texas Monthly list of the the best barbecue in Texas. 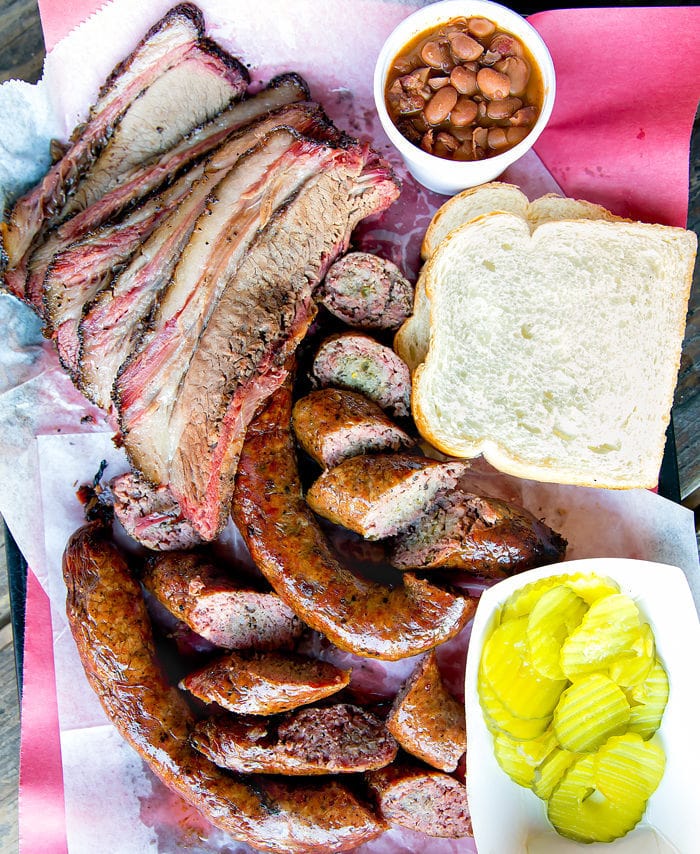 During our recent trip to Austin, we decided to make the drive to Lexington to check it out for ourselves. 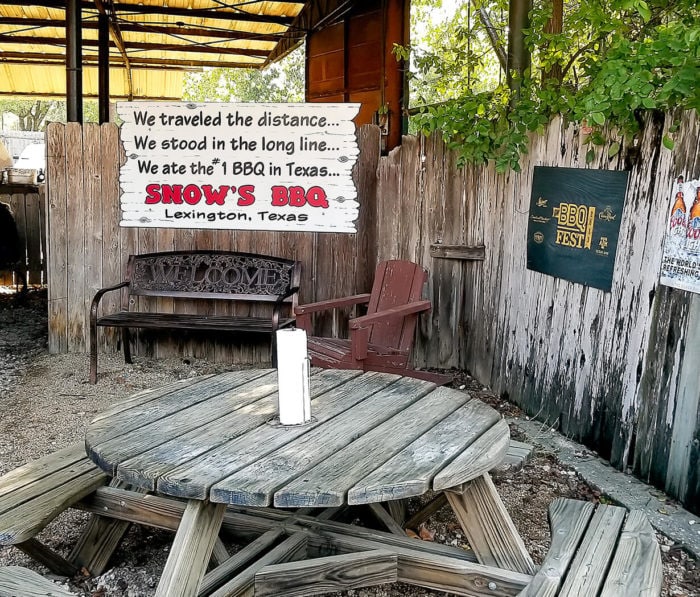 Snow’s BBQ has quite the interesting story. It’s located Lexington, Texas and is only open on Saturday mornings from 8AM until sellout (which is usually before noon). The pitmaster is an active 82 year-old woman named Tootsie. The joint was relatively unknown until 2008, when Texas Monthly first proclaimed it the best bbq in Texas. 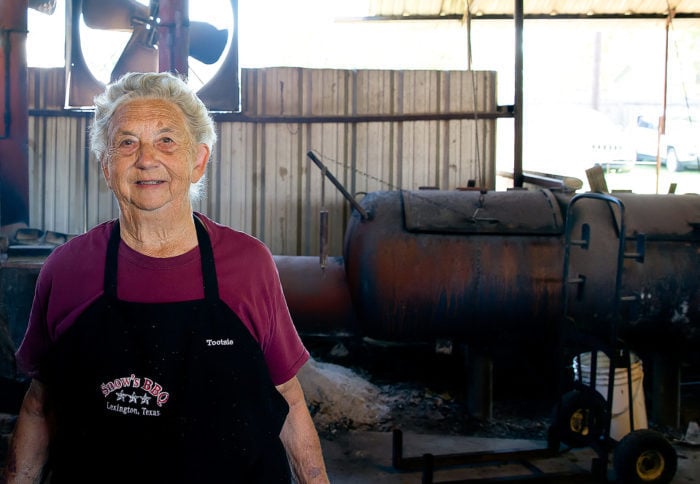 I was initially hesitant about making the trip. Lexington is an hour drive from Austin and while I don’t usually mind traveling for food, it seemed like a lot of effort to have to wake up early, drive one hour, wait in line for 1-2 hours, just for one meal.

But with the most famous BBQ spot in Austin, Franklin Barbecue, still temporarily closed due to a fire last August, we decided we should make the trip. Besides, we had already come so far and I didn’t want to leave Texas wondering if we had missed out on the best.

While my research indicated it’s best to get there before it opens, it was too early of a start for us. My goal was for us to get there before the meat was sold out. We arrived around 8:30 AM and of course there was a solid line. Luckily, we were able to find some shade on this hot Texas morning. 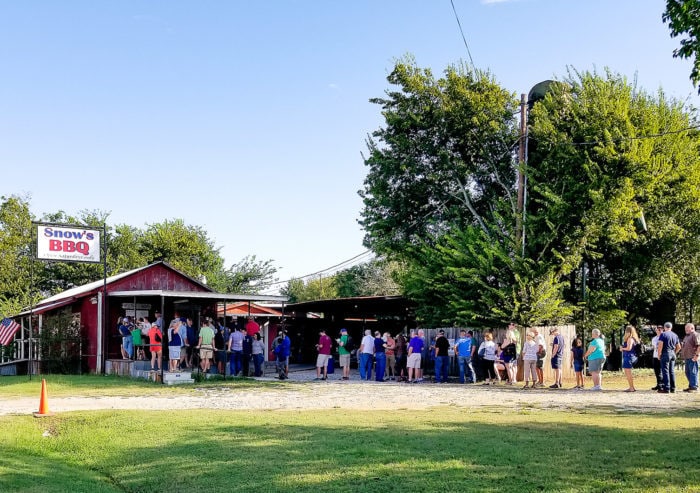 There is seating both inside and outside. 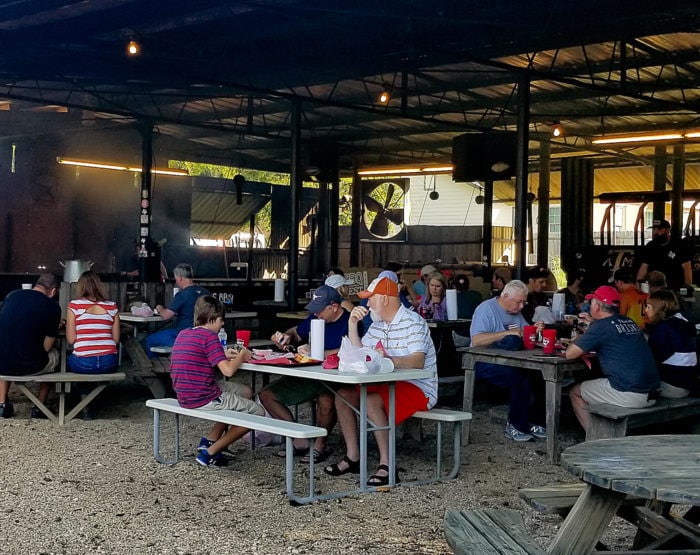 Snow’s BBQ is most known for their brisket and pork shoulder. Unfortunately, they were completely out of the pork shoulder when it was our turn to order. 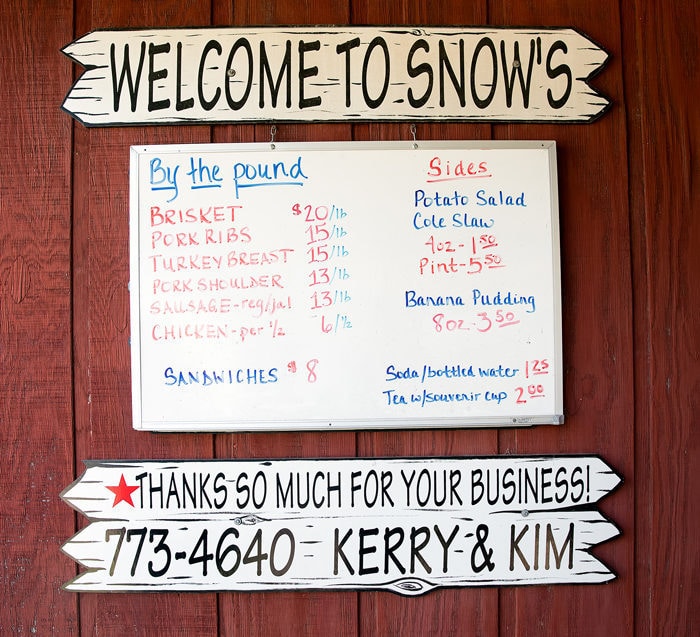 Here is what we ended up getting: brisket, regular sausage, jalapeno sausage. The pickles, beans and bread are complimentary.

The brisket was indeed different from other brisket I’ve had in the past and brisket we had during our trip. Instead of a thick layer of blackened bark, the brisket has a very thin layer of caramelized dark mahogany colored crust clinging to the fat. The flavors that come off the caramelized crust are absolutely wonderful. 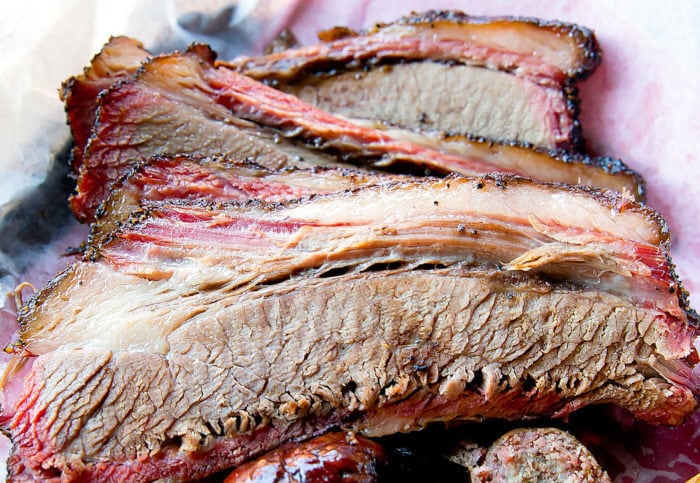 The other unique characteristic about the brisket here is the texture– it’s extremely tender, with an almost silky feel as you eat it.

My only issue with the brisket we had was that I didn’t feel that the smoke had penetrated into the leaner parts of the meat. When eating just the lean meat by itself, it was almost bland. I was wondering if it was just me, but then I heard another person at our table make a similar comment. Perhaps we just got unlucky with our brisket. If it wasn’t for that, this would have been the best brisket I’ve eaten.

The sausages were quite tasty as well. I loved the snap of the skin and the jalapeno one was especially unique. 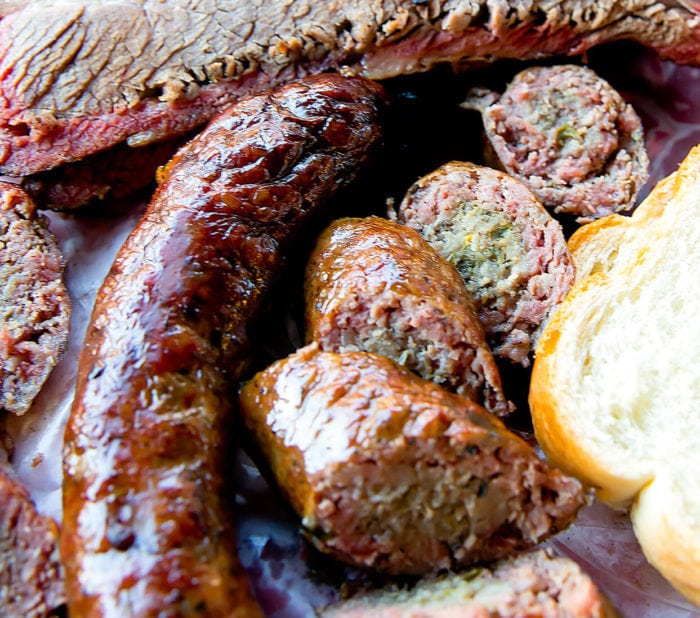 The staff was extremely friendly. The owner checked up on everyone several times and Tootsie was kind enough to take photos with guests.

Overall, visiting Snow’s BBQ was definitely a unique experience. I’m not quite sure if we’d make the drive up again as it was such a long drive and wait. But I am glad we got to try it at least once. If you do plan on going, I recommend getting there before 8AM and no later than 9 AM (but you may risk them running out of certain meats if you arrive after 8AM).