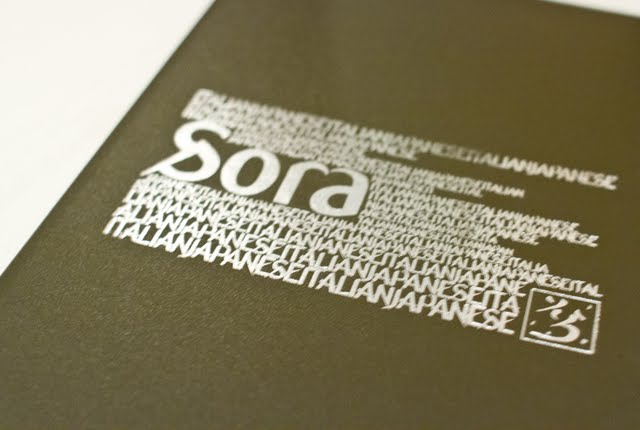 Recently DH and I had date night at Sora San Diego, an Italian Japanese influenced restaurant that recently opened.

The restaurant is headed by Chef Noriyoshi Teruya, former Nobu chef.  However, what really got me interested in this place was the fact that uni was featured on almost every section of the menu.

I left with very mixed feelings about this place. The biggest grievance was the service. For an upscale restaurant, I thought the service was quite poor and the staff was in need of more training. 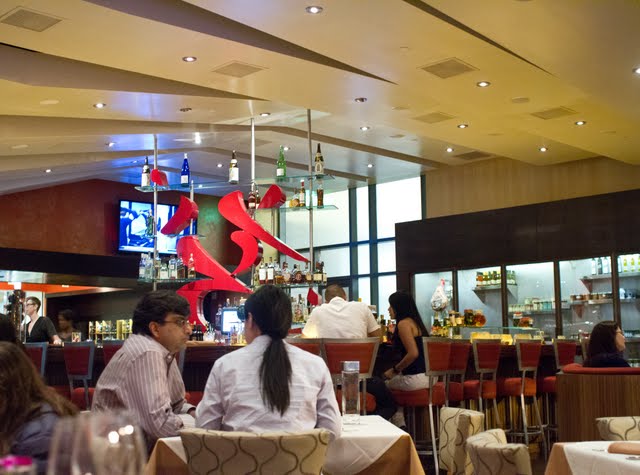 Sora has two entrances, one from the street, and the other from inside the building its located in for those who choose to park in inside the building garage. (Tip: Definitely park inside the garage as they do validate parking, making this one of the rare places in downtown where you don’t have to worry about parking.) Despite having two entrances open and a front check-in desk at each entrance, only the street entrance had a hostess staffed. So we ended up having to make our way around the entire restaurant to check in with the hostess. Once we checked in, we were stowed away into a cramped corner of the restaurant even though we had reservations and the restaurant was half empty.

Once seated, we were provided with drink menus and only drink menus. This really irked me because it seemed presumptuous on the part of the restaurant, basically expecting us to order drinks. And since it took a while for our waiter to come greet us, we had plenty of time to peruse a drink menu and a dinner menu, if they had bothered to give us one. Even after our drinks were ordered, we still didn’t get a dining menu. I don’t think I’ve ever had to wait so long for a menu. Finally, when our drink arrived and still no menu, we asked for a menu and was finally provided with one. 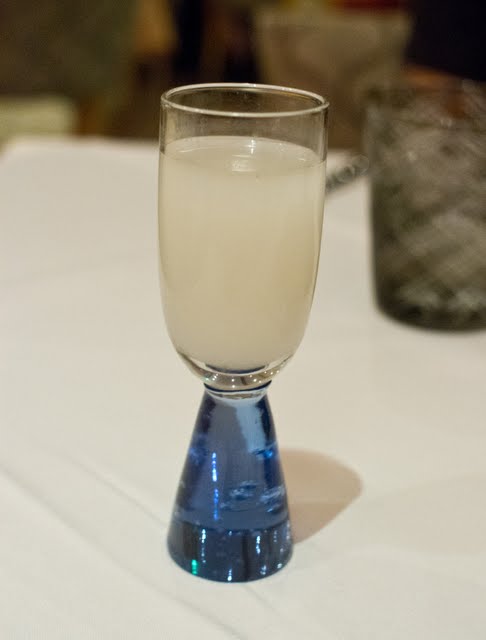 When we asked the waiter for some recommendations, I was surprised that he failed to mention any of the things I had read about that I thought were highlights of the restaurant, such as the parmesan wheel risotto. He also had no knowledge of sake despite it being a large section of the drink menu.

My next irritation was the long lull between courses. I was also surprised that there was no complimentary starter. Since this place was Italian influenced, I expected to see the complimentary fresh bread that is usually served at Italian restaurants. And since this is an upscale restaurant, I also thought their might be a complimentary amuse bouche which is usually offered at such places. But there was nothing.

I was in a pretty bad mood until our food arrived. Once we started eating though, my mood did clear. For all the services woes, I did enjoy the food and there were some interesting twists on dishes. 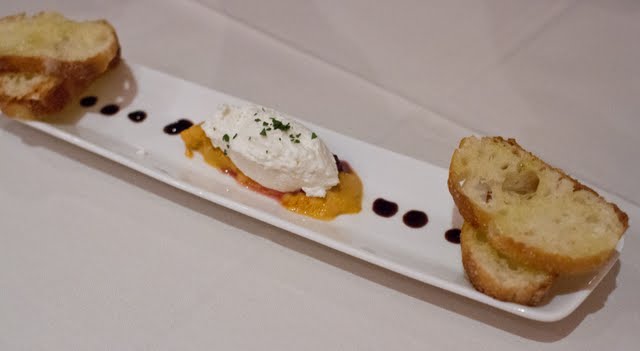 I’ve always loved the subtle sweetness of uni, and the jam actually brought out that sweetness without overpowering it. It was a great combination and I loved using the uni as a spread on my toasted bread. 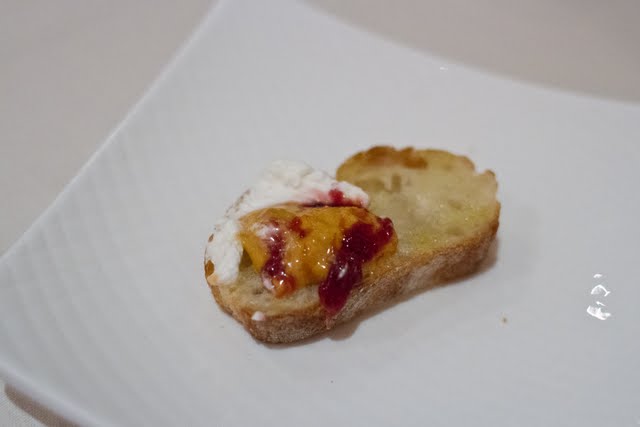 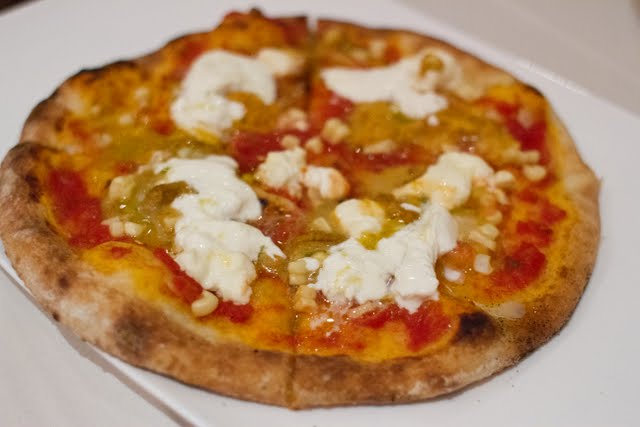 I had been really excited by this one, but it just didn’t work for me. The uni topping was paired with loose kernels of corn and sweetened cheese that I really disliked. I’m not one for sweet pizzas in general, and this was just too much sweetness. I would have preferred the uni to be paired with more savory items and let the uni actually shine. 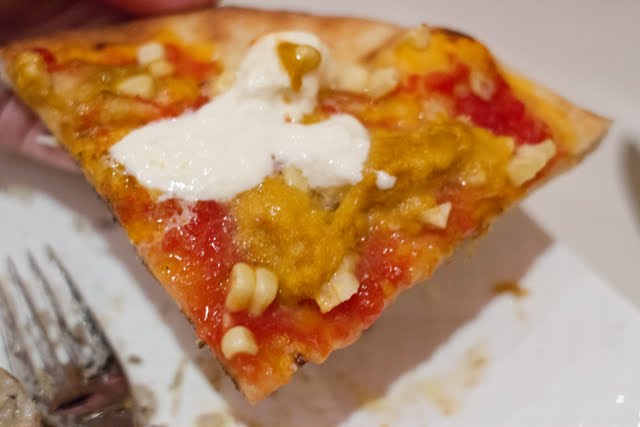 However, DH liked this, so it’s all a personal taste preference I guess. 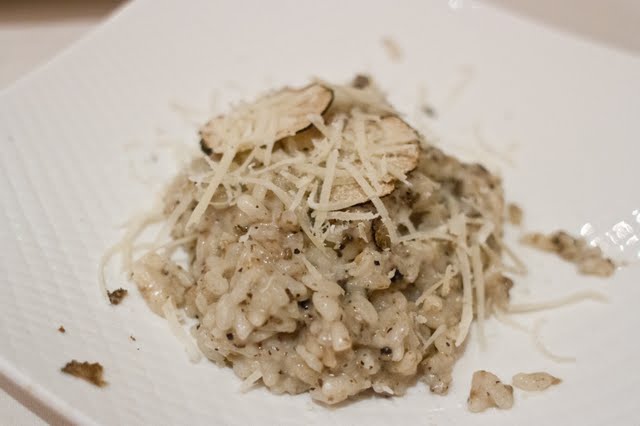 Select risottos are prepared in a parmesan wheel which they bring out to showcase. It’s fun to watch the risotto be swirled inside the parmesan wheel, coating the risotto with cheese. I was surprised that the $28 even came with shaved black truffles. The truffles, as you might have guessed, were not of the best quality. But then what do you expect for that price? They weren’t nearly aromatic enough but it was still fun to see them in my bowl. I had taken a video of the parmesan wheel presentation but for some reason it didn’t work. Here’s a screenshot from the video: 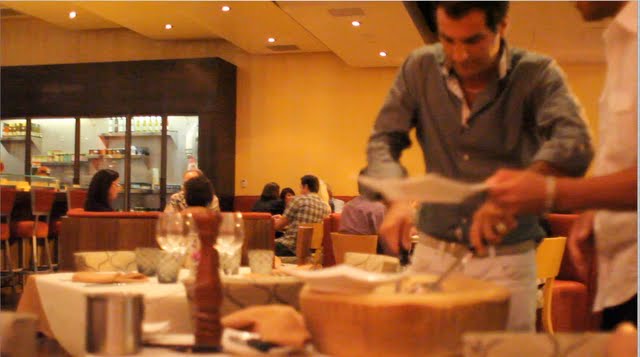 The risotto itself was quite good and cooked just right. We each were dished out a plate and I thought this was a good amount for the price. 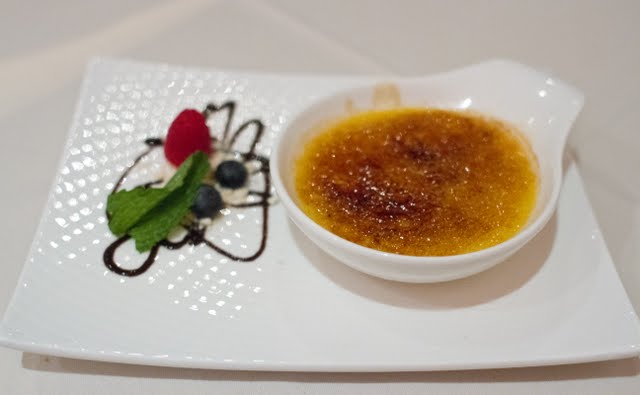 While some of the prices on the dinner menu are a bit pricey, I found the dessert prices to be a lot less than I expected (almost all around $6). We hesitated ordering dessert because we knew it would mean another bout of waiting, but I was very curious about the kabocha creme brulee, and in the end curiosity won out.

The creme brulee was pretty good, though I could barely detect the kabocha.

I’m not sure if I’d return here. I liked the majority of the food and thought the menu showed some creativity. However the service was quite disappointing, especially for the prices they are charging.