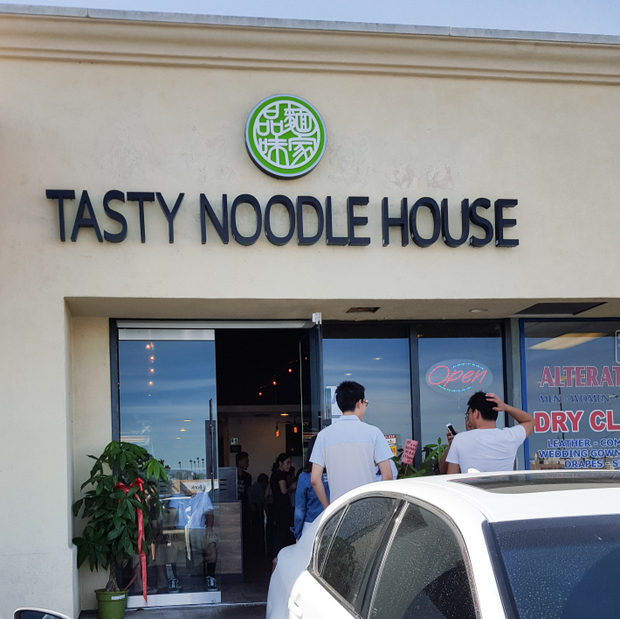 Tasty Noodle House opened recently in the Convoy area, replacing Yu’s Garden. With another location in Irvine, this Chinese chain is quite popular and since its opening, it’s kept quite busy.

We went for a late lunch, but still had to wait a good 20-30 minutes before getting a table. The menu, following the trend of most Chinese restaurants that open these days, is quite extensive. 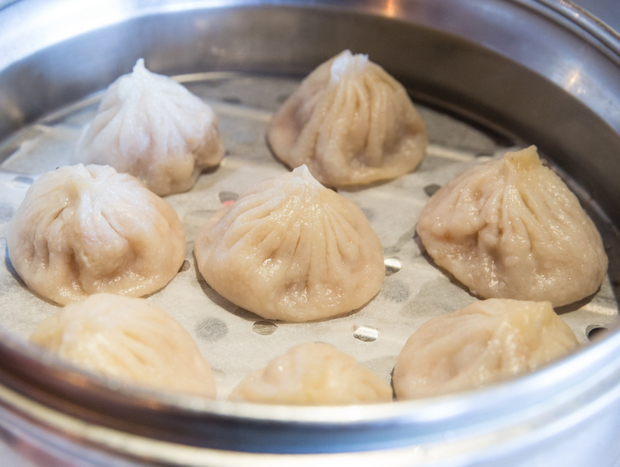 The restaurant offers several popular dumplings options like XLB, which nearly every table was ordering.

When they arrived, you could already see that the skins were quite thick. The dumplings were also very uneven in appearance, some much plumper than others. Strangely, they brought over only a single small sauce plate of shredded ginger and no vinegar. The dumplings are traditionally eaten with black vinegar and ginger. We had to flag down the server to get us the vinegar.

The dumpling, unfortunately, were overcooked. The skin were soft and almost soggy. The inside pork filling had a decent flavor and there was a small amount of soup left in each one.

Overall, we found the pork dumplings pretty disappointing. We’ve yet to find pork soup dumplings we really enjoy in San Diego. I think I may have to try making my own. 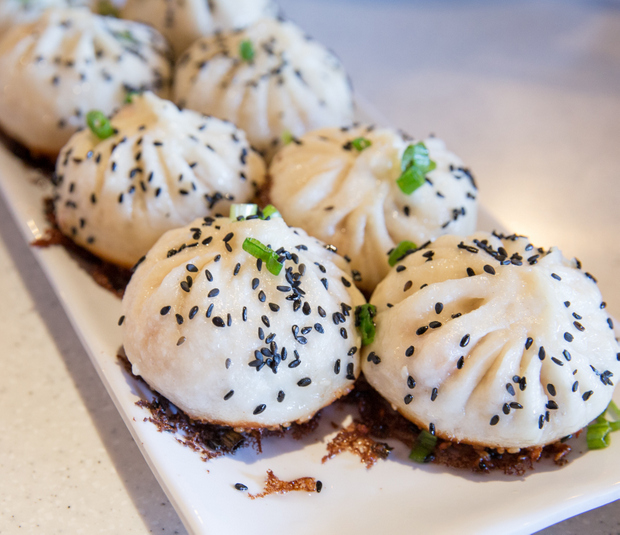 This is one of my favorite dishes, but harder to find in the US. Similar to xiao long bao, they have a soup and pork filling, but the outer skin is made with leavened dough, which is thicker and fluffier. The bottoms are also pan fried until crispy.
From previous blog posts I’ve read, people have had mixed results with this dish, ranging from burned to barely crispy. When we ordered, we were told it would take 35 minutes for our dumplings, which we were okay with. It was, indeed, the last item to arrive, but to my great delight, our buns looked quite nice. 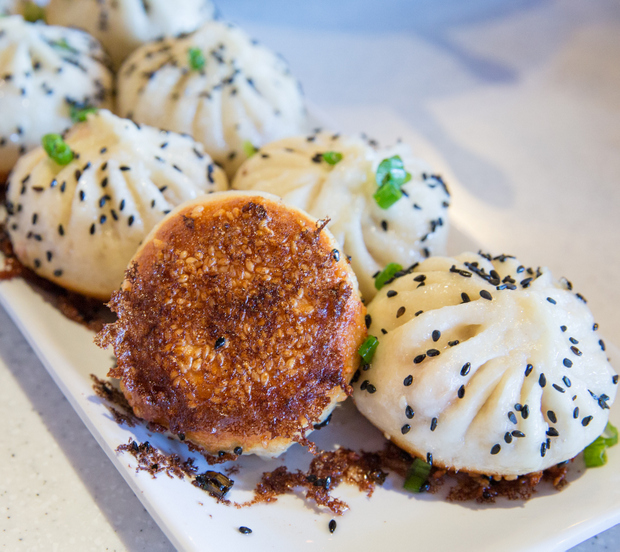 At first glance, I was a little worried that the bottoms looked slightly too dark, but once I flipped one over, I could see that they weren’t. The buns were quite good and one of our favorite dishes from out meal. The dough itself was fluffy but also maintained some elasticity. The bottoms were perfectly crunchy (though I do wish they didn’t have it crusted with sesame seeds, but that’s just a personal preference). And the interior had a pork filling with plenty of soup. 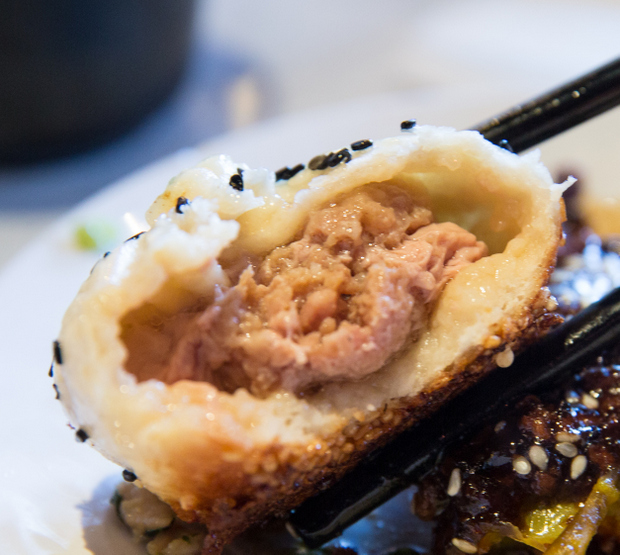 I’m hoping this was a sign that the restaurant has finally settled in and gotten a handle on this dish because we’d definitely come back for it if they continue to consistently produce good sheng jian bao.

Update: You can also get pan-fried pork soup buns at A-Bowl in San Diego. 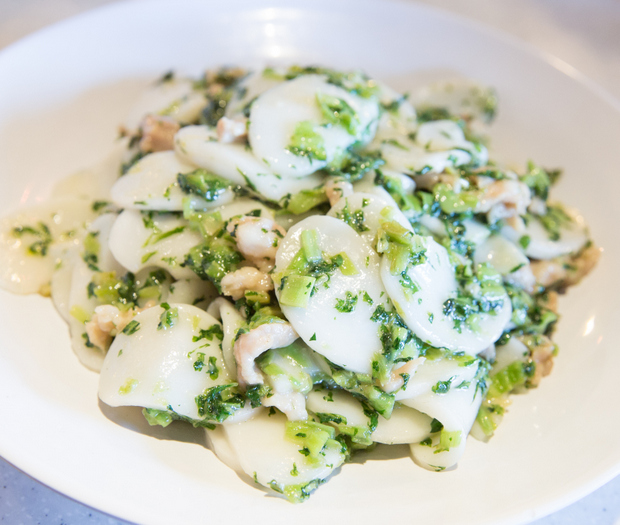 The stir fry vegetable cakes were fairly well prepared but we found them a bit under seasoned. We’d probably order the rice cakes again, but choose a different preparation. 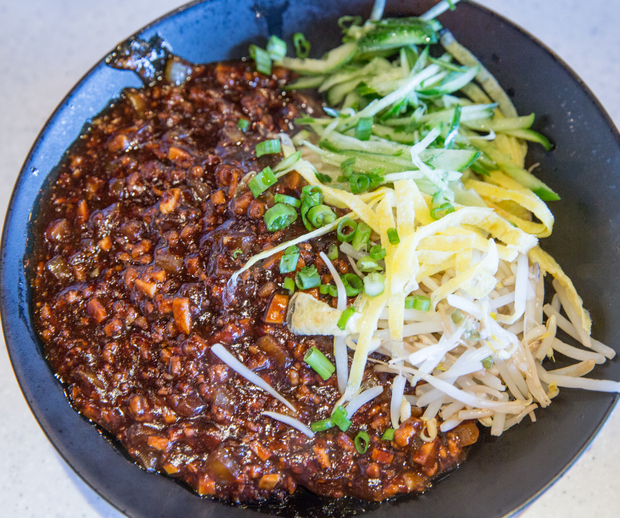 Despite having the word “noodle” in their name, the restaurant’s specialty doesn’t really seem to be noodles. We decided to try out a noodle dish just to make sure and this was my least favorite of what we ordered. The house sauce blend was similar to a zha jiang sauce (a fried meat sauce), and was pretty good. The problem was the noodles. There was nothing special about the noodles they used and they arrived in one big, overcooked clump. 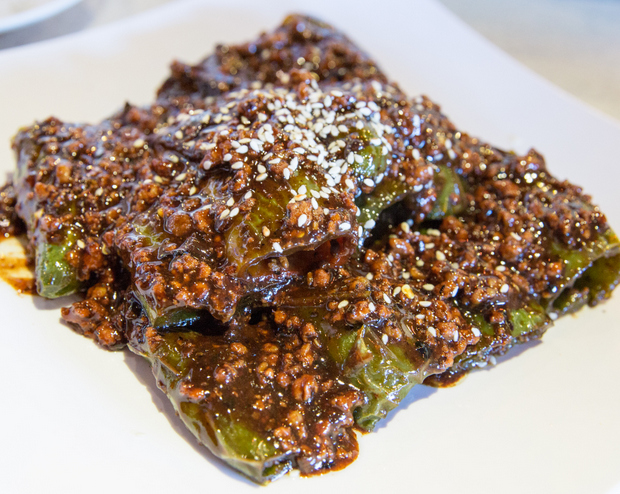 After several of our dish choices weren’t available, we settled on trying out this one. It ended up being quite delicious and one of our favorites. The chili peppers had been de-seeded and filled with a light layer of minced pork. The minced pork sauce was quite good and reminded me of a Sichuan-style eggplant and minced pork dish I had recently.

We had an okay time here. We were quite impressed by the pan fried buns, but weren’t as impressed with some of the other offerings. Hopefully they continue making good pan fried buns as I’m excited we finally have some decent ones in San Diego.

Please make sure to check out visits from mmm-yoso, Jinxi Eats and Faye’s Fork.