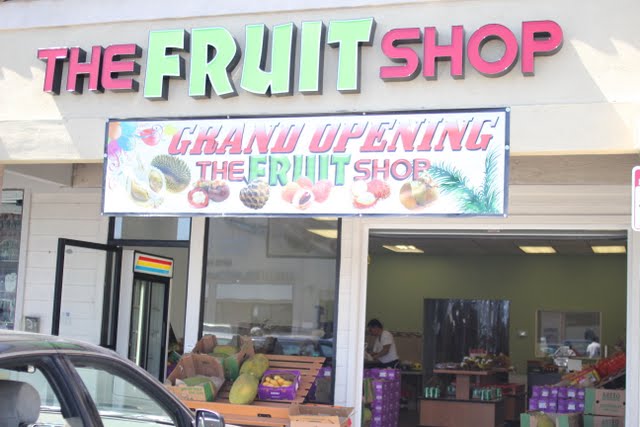 It’s been a while since I’ve been excited about blogging about somewhere new in San Diego. But I’ve been eager to introduce this new store since my visit this past weekend.

The Fruit Shop is a store that recently opened on Convoy Street which specializes in providing its customers with fresh tropical fruit that is not available at most markets. Tropical fruits are hard to find since most of them can’t be grown in the US and must be imported. The fruits offered are very fresh and come from several different countries. 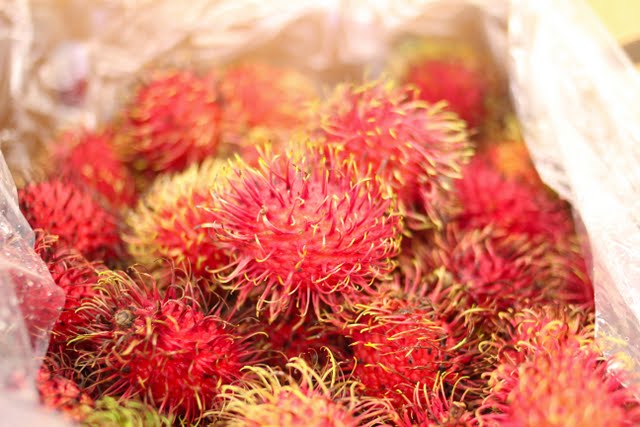 I actually found out about the store from my mom who read about it in the chinese newspaper. It is located in the same plaza as Jasmine and Dumpling Inn and owned by some of the friendliest people I’ve ever met.

I have a lot of great food loves, but tropical fruit is definitely near the top of my list. Lychee, mangoes, jackfruit, starfruit, dragonfruit, guava, I love them all. The only one I haven’t quite gotten into yet is Durian. 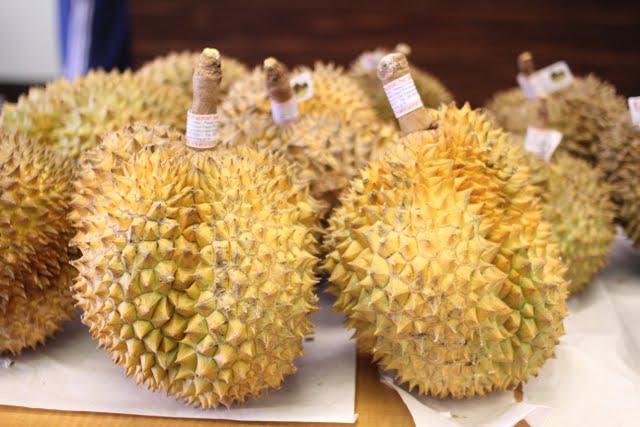 While the selection isn’t huge, they are constantly getting new supplies and varieties. The owner assured me that some of my most beloved fruit would be making their way into the shop once they are in season.  On the day I visited, the  selection included durian, jackfruit, rambutan, mango, papaya, mangosteen, cherimoya and tamarind. 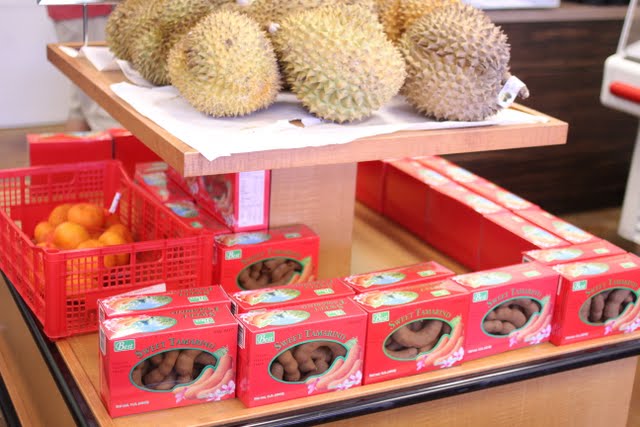 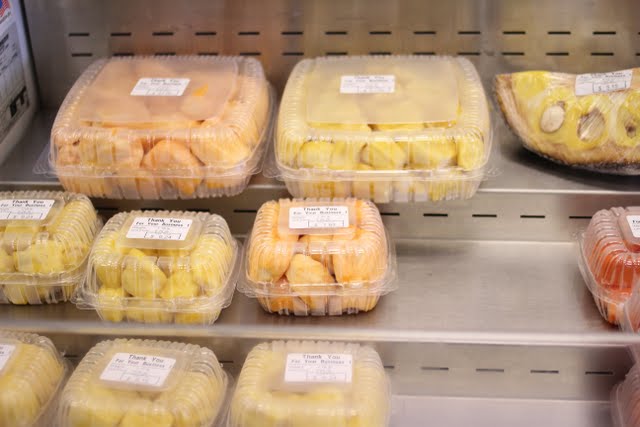 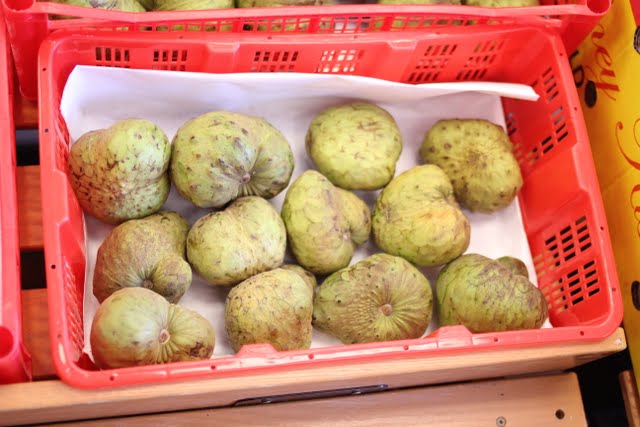 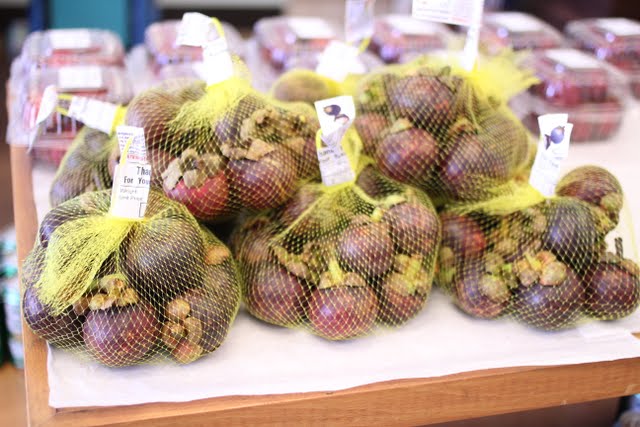 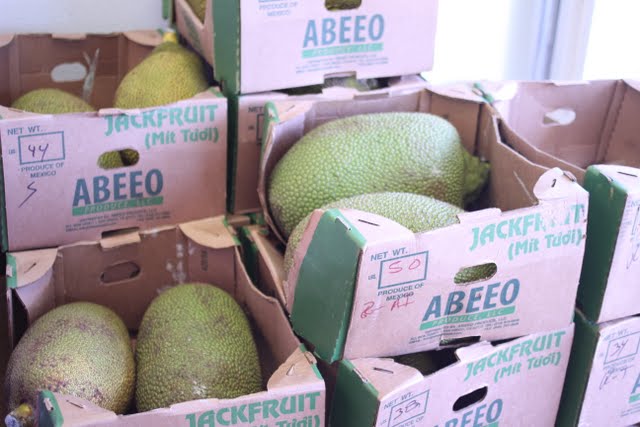 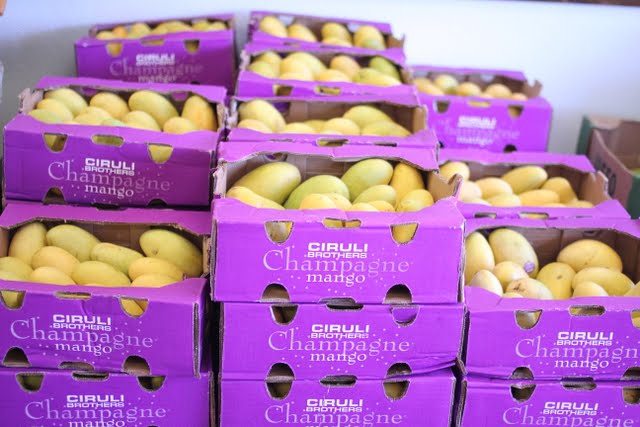 The owners of the store are Vietnamese, and it’s quite apparent that they really know their fruit. If you don’t know how to pick the fruit, they are happy to help you.

They are also very generous with their samples, letting you sample just about every fruit being offered in the store. As someone who has purchased bad fruit before, I really liked being able to test everything out before purchasing. It is also great for introducing people to fruits they aren’t familiar with. Sampling the fruit just made me want to buy them even more because each sample was sweet and delicious.

I really was impressed with the staff. I spoke with four different staff people when I visited, and they were all equally friendly and helpful. At one point they saw me taking pictures, and they went to the storage and got more fruit out just so I could have nicer photos, even though they had no idea that I was a food blogger. 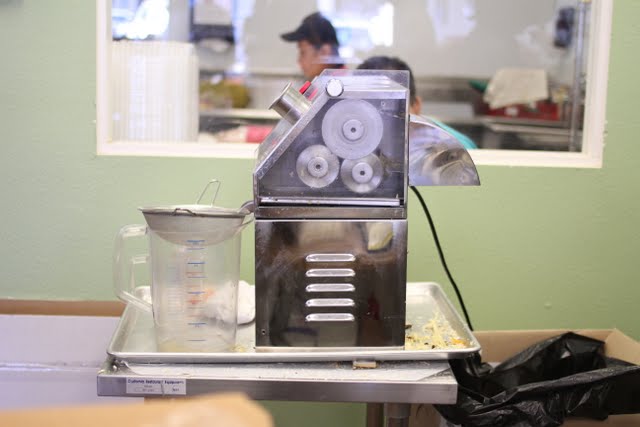 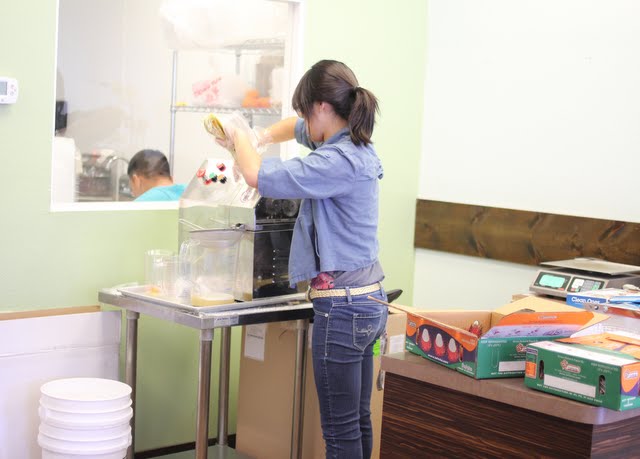 The sugar cane juice is mixed with something else, maybe lemon? In Taiwan, the sugarcane juice is just pure sugarcane, so I wasn’t used to this flavor. But it was still good and refreshing on a hot day.

I left extremely happy and with a big bag of fruit. FH took one look at my face and stated “We’ll be coming here a lot, won’t we?”

I love how exotic and beautiful tropical fruit is. I just had to photo mine before eating them. 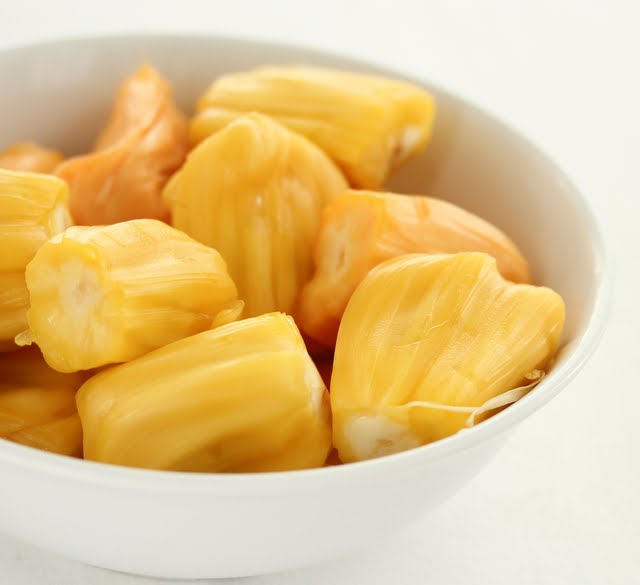 A whole jackfruit is enormous. But they sell small servings that are already cut and ready to eat. I got a small container that had both yellow ones and orange ones. I’ve never seen the orange colored ones before. Both were equally sweet. If you’ve never had jackfruit, each section has one giant seed in the middle which you eat around. The fruit tastes a little like melon. 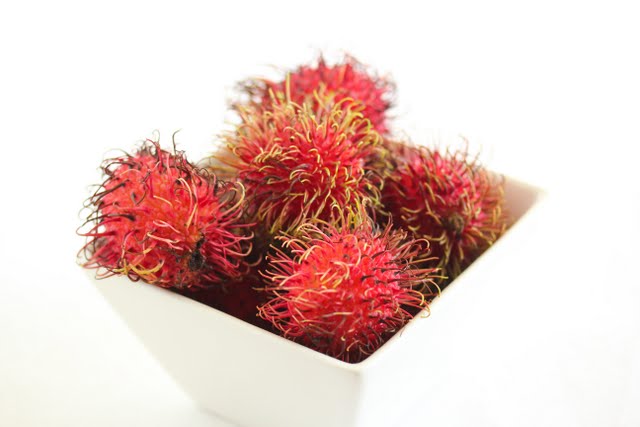 This was my first experience with rambutan. I have been wanting to try it for a long time. It’s so exotic looking and such a vibrant shade of red. It’s very similar to lychee, except in appearance. These little guys remind me of tiny tumbleweeds. Inside the flesh is a translucent white, and tastes very similar to lychee. 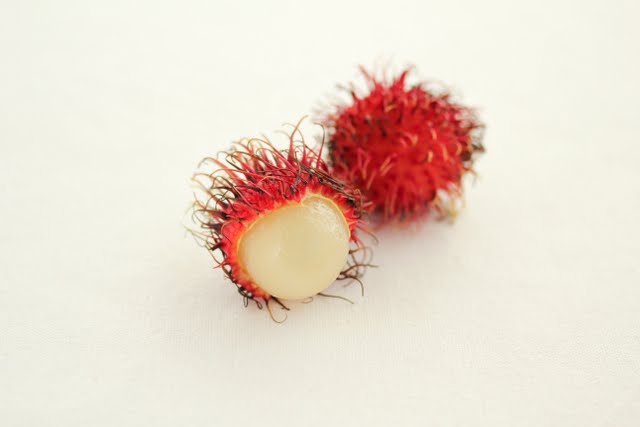 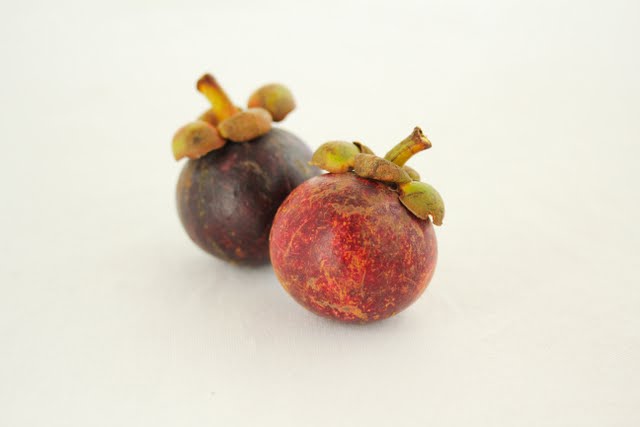 These are sometimes available at Vietnamese supermarkets and at Ranch 99. But I stopped getting them because they cost so much and sometimes I would get a bad batch where the shell was so hard, that they it was almost impossible to break open and eat. 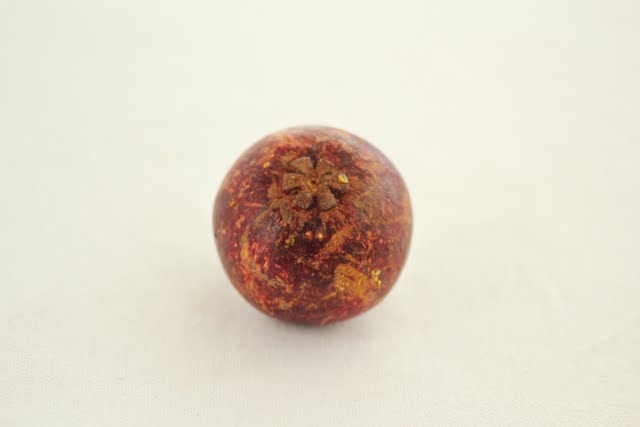 This was not the case here. While the exterior shell looks hard, it was easy to break open with my fingers to get to the white flesh underneath. 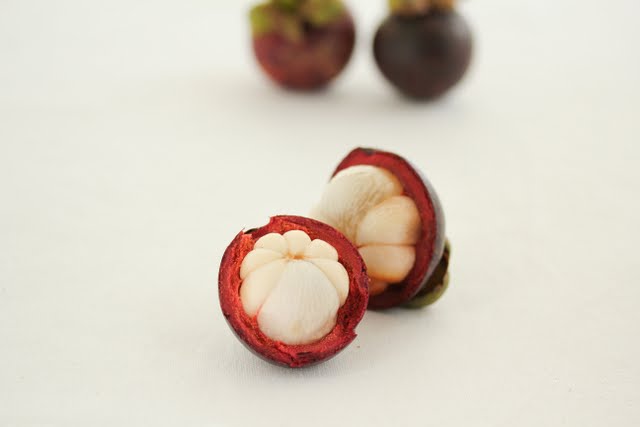 One of the reasons I love mangosteens is because they look like flowers inside. It is one of the prettiest fruit I’ve ever seen. At the bottom of the shell you will see a flower shape. Inside, the flesh is shaped to resemble flower petals. I tried to get a perfect flower shape one for this picture, but out of the five I peeled only one was perfect and I messed up the shell.

There are usually a few perfect looking ones. But more often there is one petal that slightly bigger because it contains a seed.

The mangosteen tastes very much like a juicy white peach. The petals open up like tangerine pieces and you can eat them one by one.

Cherimoya. I haven’t dug into this one yet, so no pictures of it cut open. Inside, there are small black seeds and white flesh. It tastes similar to a soft ripe pear that is almost syrupy sweet. The best way to eat it is to cut it in half and dig the flesh out with a small spoon. 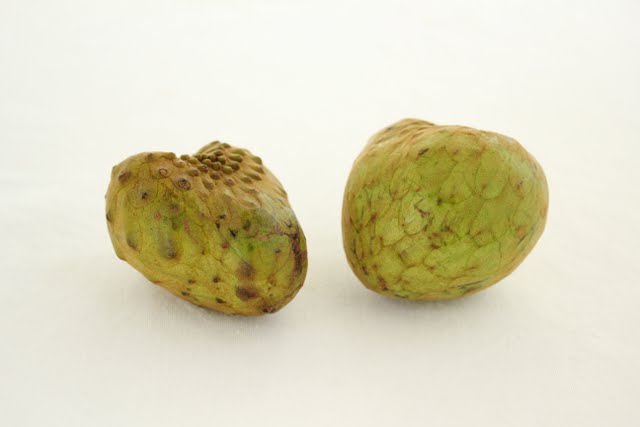 I spent a whole afternoon just sitting around enjoying all my fruit. I was so ridiculously happy. I will definitely be going back to The Fruit Shop often.

21 comments on “The Fruit Shop”