On my last trip home during the holidays, my family found a Chinese restaurant that we enjoyed, mainly because of the cheap prices. The food isn’t anything spectacular and the service is even worse than the average Chinese restaurant, but it was hard to beat the prices.

I heard they offer cheap dim sum prices as well, but we came for dinner. You can order straight from the regular menu, but the best deal is to order off one of the family set menus. The six person set ($69.99) includes soup, chicken dish, lobster dish, choice of any four dishes from the main menu (which ranges from $4-14), fried rice or noodle dish, and dessert. All of the dishes on their regular menu was up for grabs, even the lobster dishes. 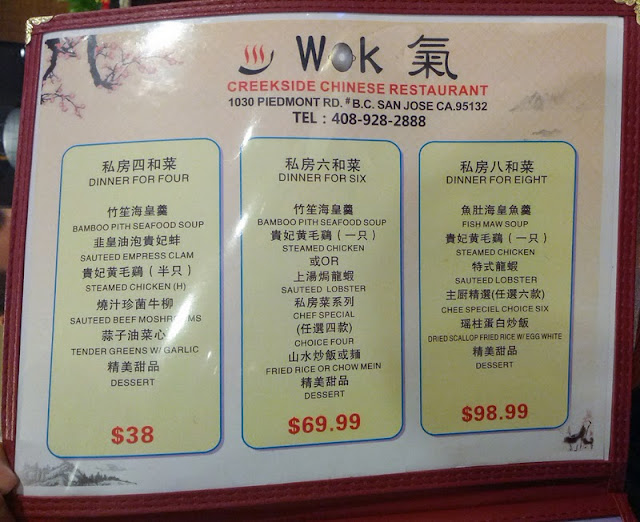 My lobster loving family joked that we could technically order four lobsters from our choice of four if we really wanted to maximize on the deal.

The restaurant space used to be occupied by another Cantonese restaurant that had also been quite cheap, but when the quality of food deteriorated, we stopped going. It’s a big space, but also quite loud and crowded and the service leaves something to be desired. It was a similar experience with the previous restaurant as well. 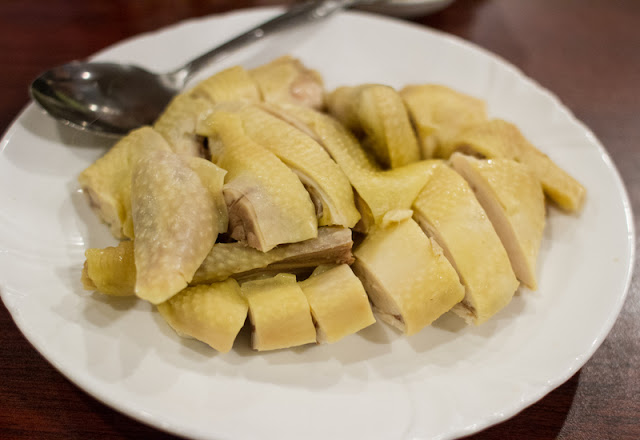 This is one of my mom’s favorite dishes. The chicken is simply steamed and served with a minced ginger dipping sauce. The chicken has a natural subtle sweetness and this preparation allows that sweetness to come through. As you can guess, the name comes from the vibrant yellow skin. 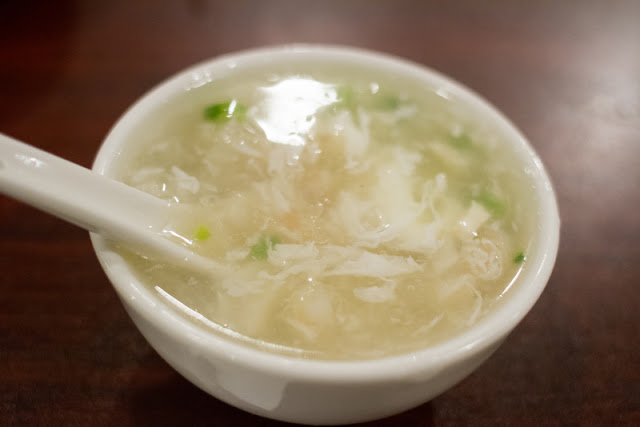 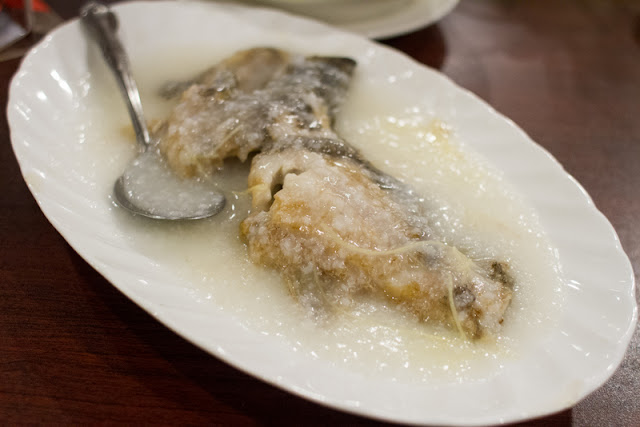 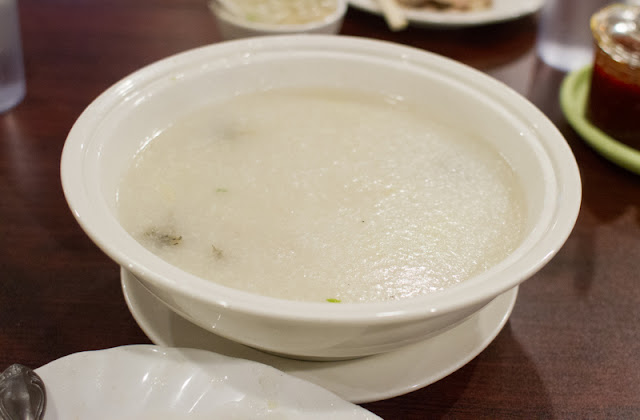 This was my first experience with goose intestine, which apparently is a childhood favorite of my parents. I actually really enjoyed it. The intestines were thin and had a crunch to them, unlike the typical chewy texture of most intestines. Offal usually has a strong flavor that can be off-putting to some, but this was much lighter. I would have guessed it was a vegetable derivative if I didn’t know what it was. 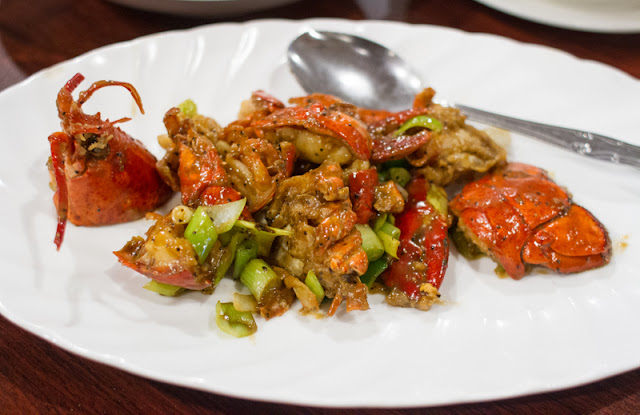 The lobster was so depressingly small. I’m not even sure you can call it a chicken lobster. We were quite disappointed by the size, and were glad we didn’t order all lobster dishes. My family has since been back and on their last trip the lobster was bigger, so I guess it’s just the luck of the draw. 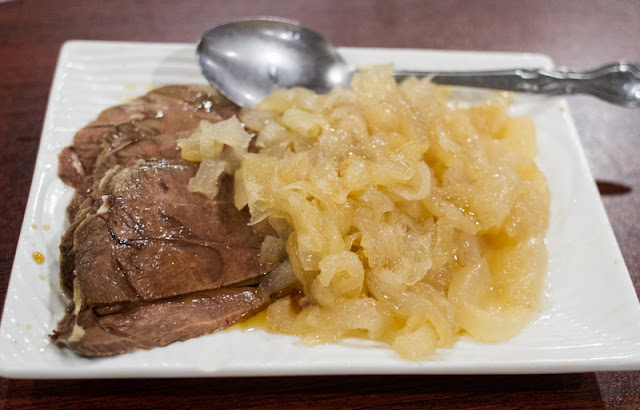 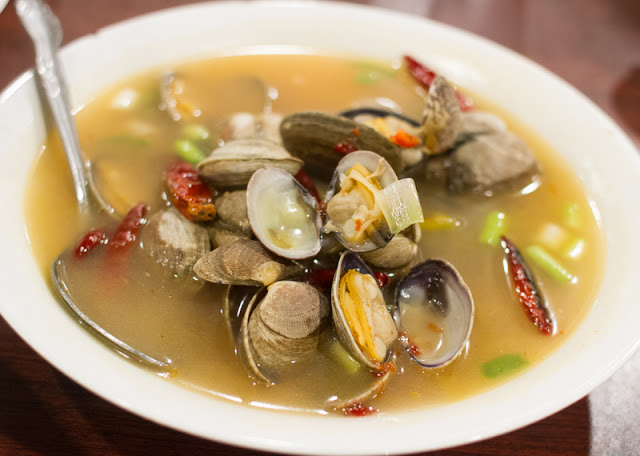 There was quite a strong flavor of wine in the sauce, which I quite enjoyed.

Lobster dish (the one that came with the set menu) 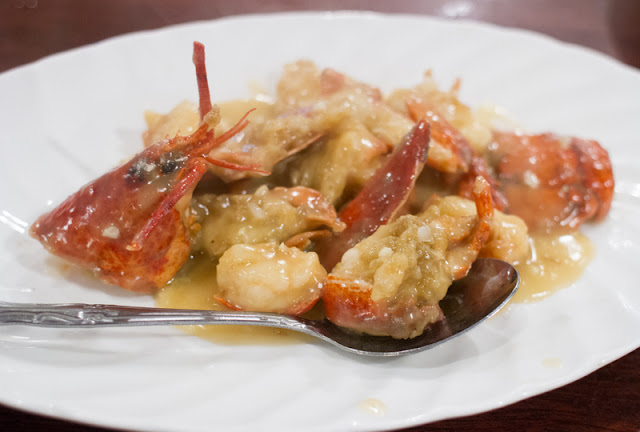 Slightly bigger, but still weighing barely a pound at most. 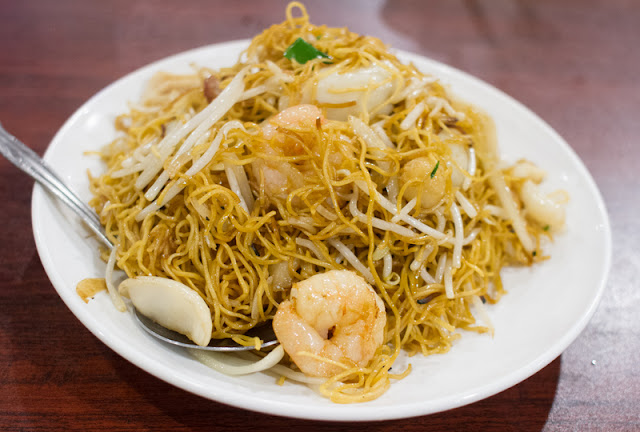 The noodles were a bit salty and there were only a few shrimp in the dish, though the ones they used were jumbo. 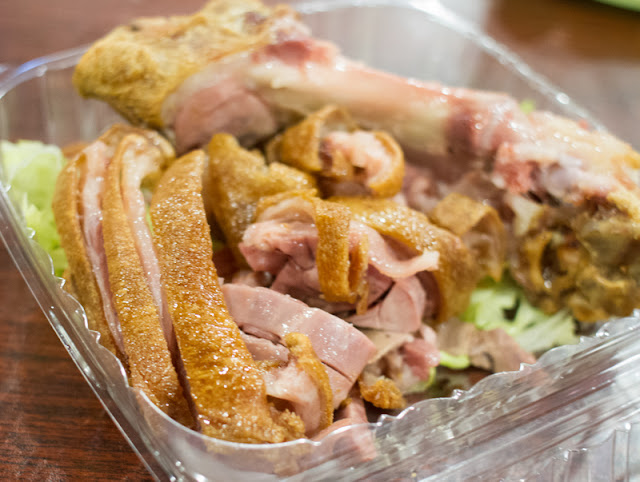 We added this one at the end and there was some miscommunication and the waiter had stored it for us “to go.” I wasn’t really in the mood to take photos anymore and actually didn’t take a picture until after we began eating it. After taking a bite, I took out my camera again because this was actually one of my favorites of the night. I haven’t had pork knuckle prepared this way before and really enjoyed it. The outside skin was crispy and the inner skin layer had a nice chewy texture as a result of it being deep fried. The dish was too salty, but other than that I loved it. 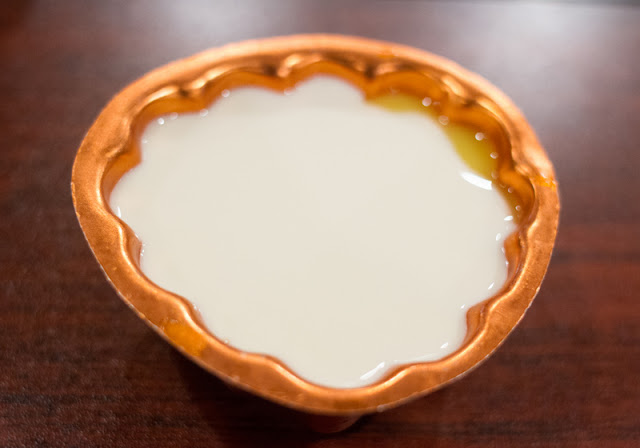 We had a pretty good time here except for the poor service and noise. But the cheap prices were worth it. All the dishes in this post were included in the $69.99 price except two: the jellyfish (which was around $4) and the pork knuckle, which we added because we had more than 6 people eating that night. It’s cheaper than buying all the ingredients and making it yourself. It was good enough to make our regular rotation and hopefully I’ll get a chance to revisit soon.