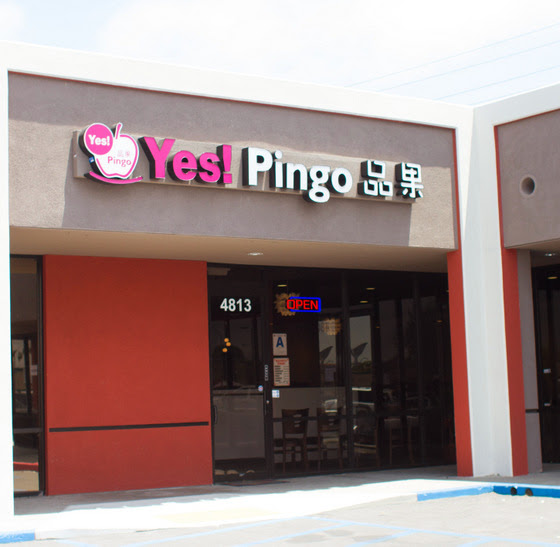 Yes! Pingo, a Taiwanese restaurant and cafe, has finally opened.

While I’m not crazy about the name, I became very excited about this restaurant when its website promised authentic Taiwanese cuisine and offered popular Taiwanese dishes that aren’t available at other restaurants in San Diego.

Side note: I’m still trying to figure out the name; I should have just asked one of the employees. Pingo sounds like the Chinese word for apple and would explain the apple logo. However, the chinese character being used actually does not mean apple, it just has the same pronunciation.

The opening had a lot of hiccups which really had me concerned. First it was delayed several times. Then just a few days after its soft opening, they decided to close again to work out the kinks they had experienced during the soft opening. When we visited this weekend, things seemed to be running pretty smoothly. 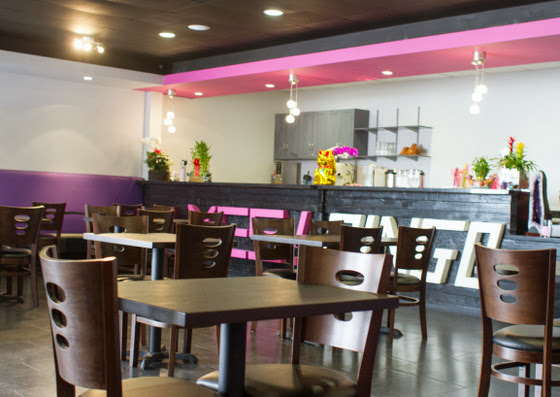 The spacious cafe offers quite a selection of Taiwanese cuisine, including many popular “street food” dishes like Taiwanese meatball, oyster pancake, pork stew noodle, and even stinky tofu. 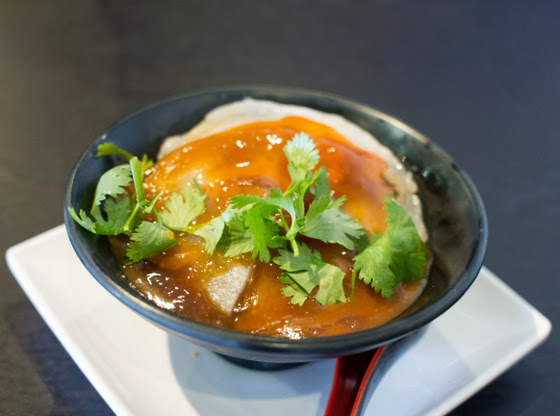 The Taiwanese Meatball is a very popular street food item. The translucent, gelatinous and chewy shell is filled with savory bamboo shoots, strips of pork, and mushroom. It’s always served with a reddish sauce that is salty and sweet. 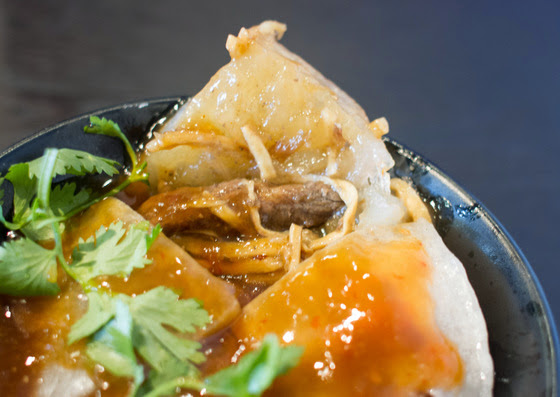 The meatball is usually served with the top portion already cut, making it easier to divide and eat. This was quite tasty except for the large chunks of  meat. The meat should be thin, lean strips of pork but the ones inside the meatball were quite big and some were fatty. 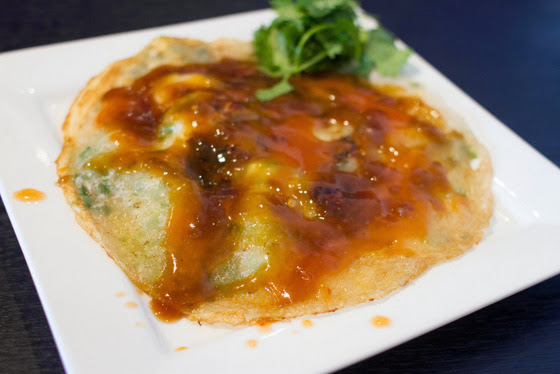 This is another classic Taiwanese street dish. Beaten eggs are cooked with potato or tapioca starch, creating a gelatinous texture similar to the meatball. It’s spread out flat like a pancake but filled with baby oysters and napa cabbage. Also like the meatball, it’s drizzled with the red sauce. 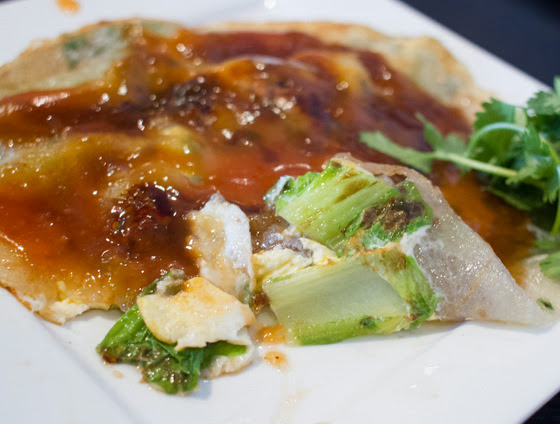 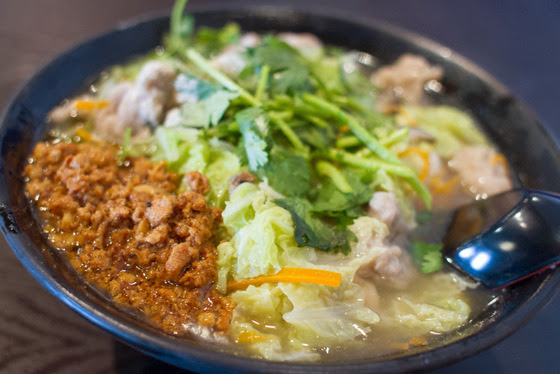 This is basically a noodle soup but it’s called a stew because the broth has been thickened considerably with cornstarch, giving it more of a stew-like consistency. This is normally one of my favorites and I always have to have it in Taiwan, so I order it whenever I can find it on the menu. There is also a squid version which I enjoy even more but they were out of the squid one on my visit. 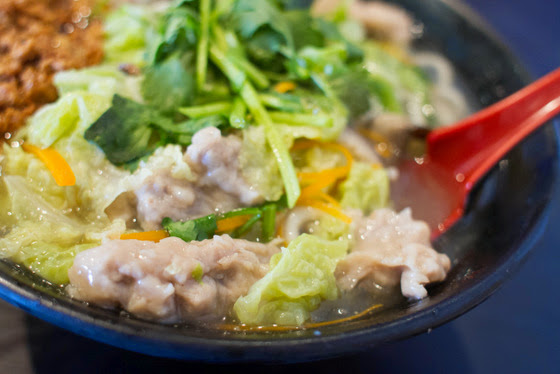 Unfortunately, this was a disappointment. The stew is usually full of bold flavors, but this version was really bland. The only thing giving it flavor was the minced ground pork, which I actually have never seen a version that even contains the ground pork. 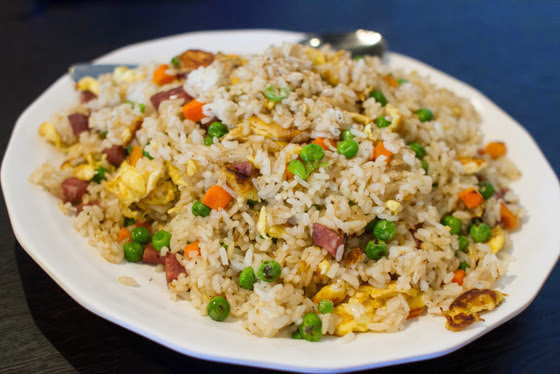 This was Mr. K’s choice. The portion size was quite big. It was your typical home style fried rice with chunks of Taiwanese sausage mixed in. It tasted fine but I also felt it was something I could easily recreate at home. 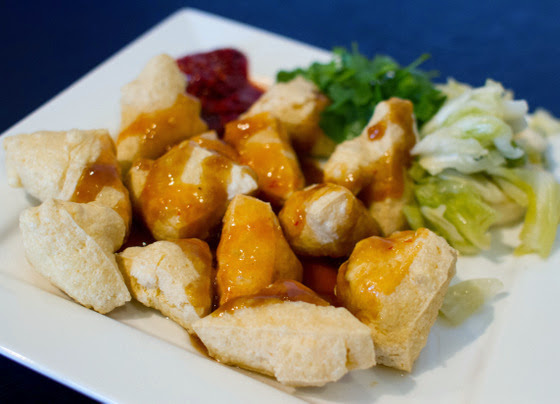 I was surprised to see this on the menu. While it’s a popular Taiwanese street food, a lot of restaurants tend to avoid serving it because of the strong odor which can be unpleasant for customers unused to eating this fermented tofu dish. This was the biggest failure of our visit and I would not recommend ordering this dish.

There was indeed an odor with the tofu but it was different from the fermented odor typically associated with the tofu. Instead, it was replaced with another smell I couldn’t quite distinguish. Mr. K helpfully suggested old tires. It was as if they tried to vacuum out the normal fermented stinky smell and ended up replacing it with something else that smelled almost chemical. I actually could barely stand the smell, making me realize that my reaction is probably the reaction many have to stinky tofu. The tofu also tasted like the smell so I didn’t even finish this. 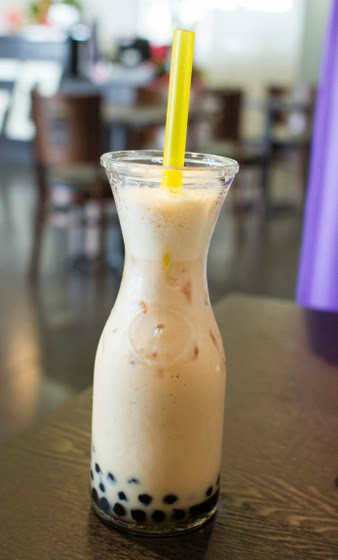 Like most Taiwanese cafes, they have a pretty large list of milk tea variations. I stuck with the classic and loved the large bottle glass it was served in.

Overall we had a decent experience here. We liked some dishes and didn’t like others. I’m happy to see a Taiwanese restaurant open in San Diego that offers such a varied menu and I’m looking forward to trying out more items. 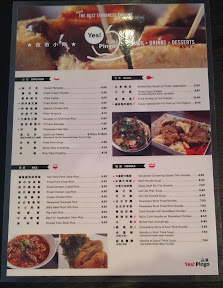 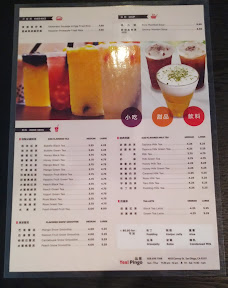