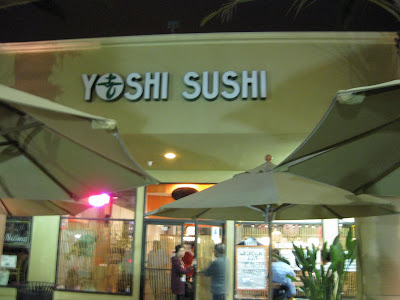 Starting from about Mid-March is what I like to refer to as the beginning of birthday season.  There are so many people whose birthdays fall between March and April and little bit going into May. It seems every weekend I'm busy at some birthday dinner.  Both Boyfriend and my birthday fall within this period also.  Of course to celebrate our birthdays we did a lot of eating, so I have a lot of posts to catch up writing on.

Normally Yoshi Sushi doesn't take reservations, but we got lucky and they agreed to accommodate our large group. This was my first trip to Yoshi Sushi. They don't require everyone to do the all you can eat option, which is another nice feature. It really makes this place a friendly place to celebrate birthdays.

I had read from yelp that they tend to "throttle" your orders. For instance, they will forget to bring certain items, etc.  Of course this bothered me, but I knew it going in and figured we would just have to keep after them for those orders. 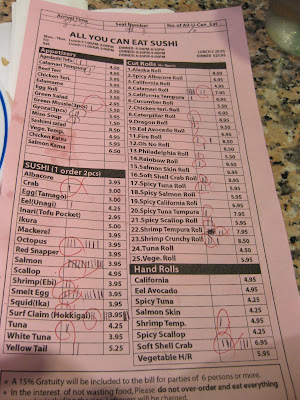 There are quite a few options on the all you can eat menu ranging from appetizers like gyoza and chicken teriyaki, to specialty rolls, nigiri and hand rolls.

Sure enough, there were a lot of "forgotten orders" that were marked done but we never received.  Also for some of the nigiri, we would place something like 6 orders, and only get 4 of them.  This was a bit annoying.  The sushi was just okay.  Boyfriend didn't really enjoy it and doesn't really want to go back. I agree the sushi wasn't very great, but I think this is a fun place to go to with a large group.  It was fun to see people competing to see who ate the most.

My point and shoot camera really did not like the lighting at Yoshi Sushi.  A lot of my pictures have a glare on them that I couldn't get rid of.  Oh well. I tried to snap pictures of everything we ate. 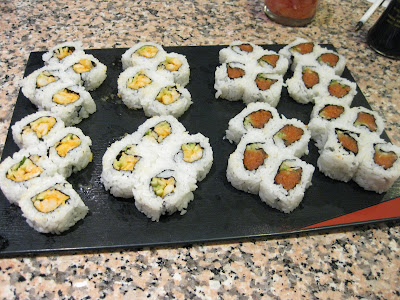 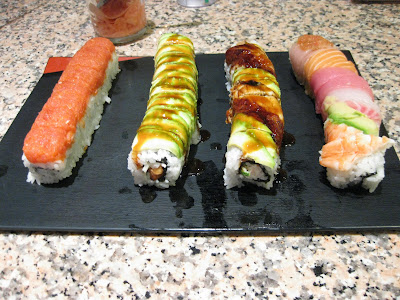 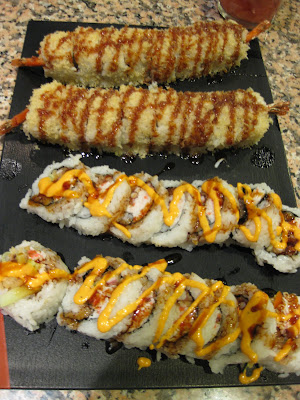 Crunchy shrimp tempura roll and calamari roll.  The calamari roll was probably one of my favorites of the cut rolls, but then I really like calamari. 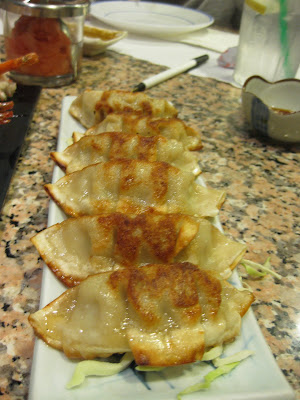 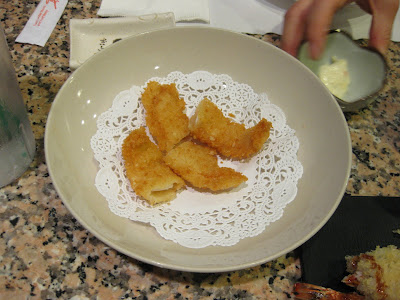 This was one order of fried calamari.  The four tiny pieces looked so small and they weren't very good. 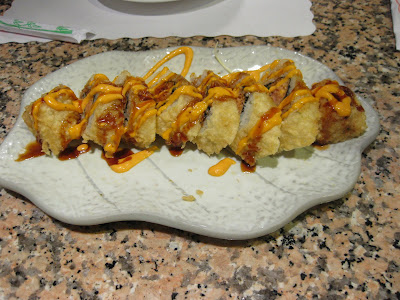 Tempura roll.  This roll did not go over well at my table.  The flavors just didn't seem to mesh well together. And the tempura batter was more sticky than crunchy. 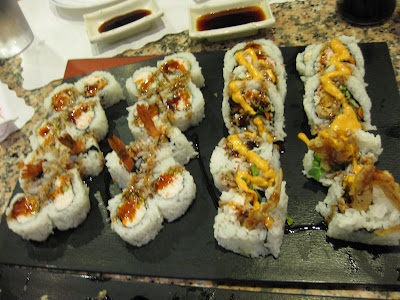 I'm not sure what the one on the left is, but the right one is a soft shell crab roll. 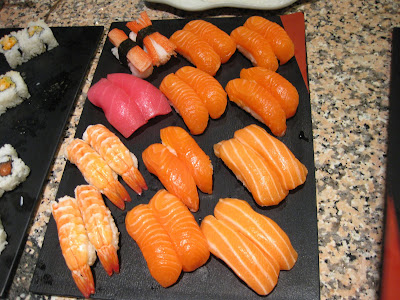 There were a lot of nigiri orders placed, but we never got the full amount we asked for.  This one has tuna, salmon, shrimp and imitation crab. Boyfriend complained that he didn't like the nigiri because the rice was too hard. 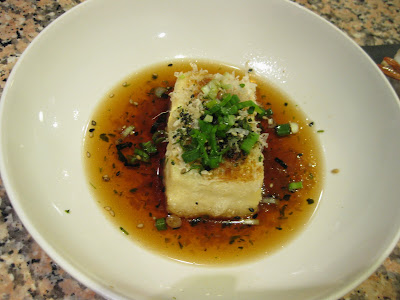 Agedashi tofu. I was really disappointed with this. I don't remember why, but I remember not liking it at all. 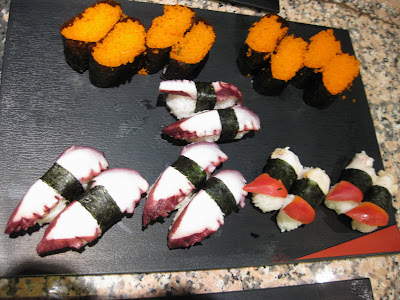 Masago, tako (octopus) and surf clams.  These were probably the most popular at the table and we kept not getting enough. Each time a plate would come up and they would be gobbled up and there were quite a few orders missing. 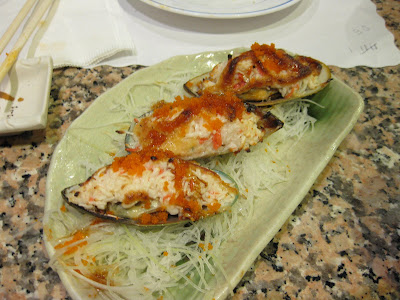 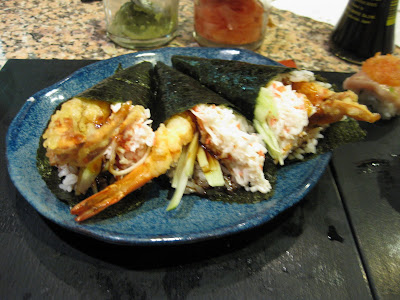 Hand rolls.  Two soft shell crab ones and one imitation crab meat one. It's funny. After these handrolls arrived and we eaten, Baby Bro and his girlfriend were arguing over how many handrolls arrived.  Four were ordered.  Baby Bro's gf said she didn't get hers because they only brought three orders.  Baby Bro kept insisting there were four rolls.  So out came the camera to check for proof!  Taking pictures does come in handy. It even ends arguments! 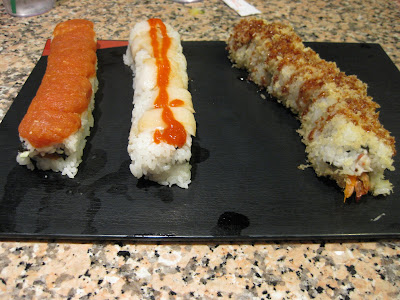 A fire roll, Oh no roll and shrimp tempura.  These came near the end of the meal and were really hard to finish.  The Oh no roll became the "Oh No" roll.  The people who ordered the rolls figured that they could just eat one or two pieces and everyone would help them finish.  Obviously a big mistake.  No one has room to "help" finish at the end of the meal. 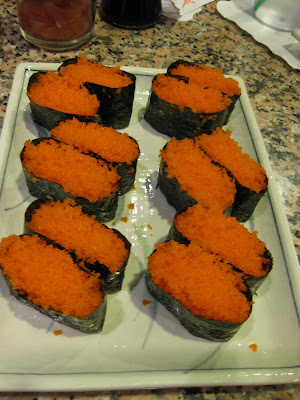 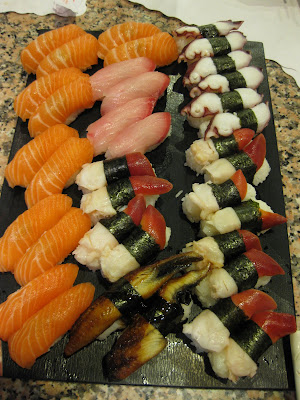 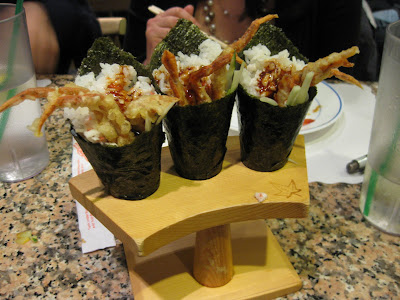 A final order of soft shell crab hand rolls.  Because soft shell crabs are so small, you can deep fry them and eat the shell.  The deep fried legs are wrapped in this roll.  It was a pretty big and filling roll, but fun to eat.