Boyfriend and I went to Disneyland this past weekend, to use up our Twofer tickets from my free birthday ticket last month.  Of course, we had to stop by 85C Bakery and Cafe along the way.  My original post on 85C can be found here.

For those of you who have read the original post, you know that 85C is my new favorite place for chinese breads.  It is a popular Taiwanese cafe chain, and the Irvine location is the first and so far only location in the US.  The breads are so soft and so fresh!  The sound of “fresh bread” can be heard every few minutes all day long as the employees constantly are bringing out bread that rarely has time to cool before it is snatched up, allowing you to have very fresh, warm bread.

While 85C is always crowded, it was particularly bad when we arrived on Saturday.  It took a while for me to maneuver through and get the breads, with Boyfriend holding a spot in line.  Because 85C has so many different types of breads, they don’t always have the ones I like available.  This usually isn’t too much of a problem, since I like so many.  However, for some reason, none of my favorites were on display this past visit!

Since none of my favorites were available, I tried some new items.  For instance, this multigrain bread: 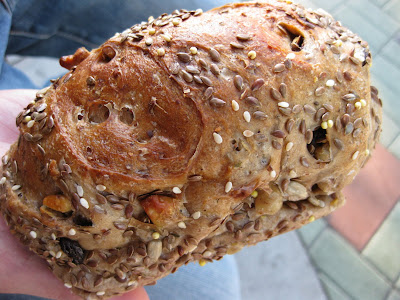 This bread was chock full of grain bits, walnuts and raisins.  I’m not sure how “healthy” this bread really is even though it is a multigrain bread.  It was very soft, and not sweet or salty.  It wasn’t my favorite, but out of the multigrain breads I’ve eaten, I would say it is pretty yummy for multi-grain bread.

I also had this bread filled with raisins and topped with pumpkin seeds.  Unfortunately it got devoured before a picture could be taken.  It was quite good though.  The raisin filling wasn’t too sweet.  Usually I don’t like fillings in breads because they are usually really sweet.

We also got the brioche 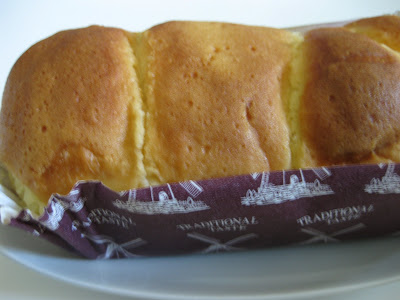 This is one of their most popular breads.  There is no filling.  It reminds me of Hawaiian rolls.  While the bread is good, it’s not one of my favorites because I don’t think it stands out. I feel like I can get similar tasting breads at my local Ranch 99, and so this bread definitely isn’t worth the drive to Irvine.  If I’m already there though, I usually get it.  It’s soft and sweet, but not as sweet as some of the other breads.

I also got the chocolate swirl bread.  This is a new item.  I was already excited by the idea of chocolate bread, and it tasted even better than it looked! 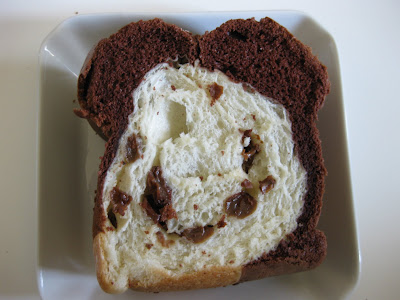 The chocolate portion is actually chocolate cake.  A very fluffy, light chocolate cake.  It’s a chinese type chocolate cake.  For those who don’t know what I’m talking about..well, normally a chocolate cake is very rich and is made out of a lot of chocolate.  Chinese bakeries make a more spongy type cake, and the chocolate is like a spongy cake that has a light chocolate flavor.  It’s definitely not the type of cake that would satisfy a craving for chocolate, but it is good.  This is the type of cake used in the bread.  I enjoy this type of cake.  The one used to make this bread was one of the fluffiest, softest chinese style chocolate cakes I’ve ever had.  The white part of the bread is actual bread.  It’s not a sweet bread, just regular, soft bread.  The contrast goes surprisingly well together.  I would think they wouldn’t mix well but they do.  The inside has a swirl of raisins.  This cake was so soft, light and fluffy, it was hard for me not to gobble the entire thing in one sitting.

They are sold as two “loaves,” two slices per loaf.  So a total of four giant pieces.  I believe it was $5. 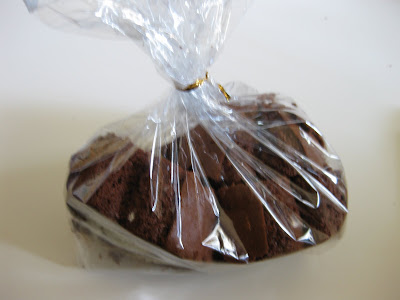 Here is one loaf: 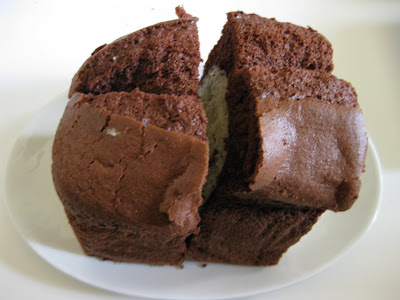 After taking these pictures, I gobbled up the remaining three pieces. I already want to go back for more!

Luckily for Boyfriend, they still had his favorite bread that day, so we got a bunch of them. 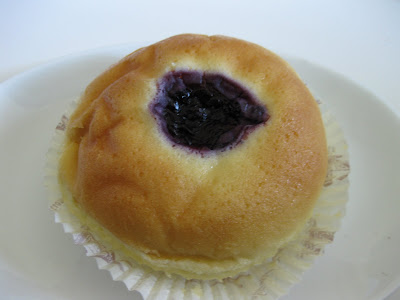 These have a blueberry cream cheese filling. It’s a pretty good bread.  It’s one of the few breads with filling that I enjoy.

If you are ever in the area, I recommend stopping by and try the breads! Don’t be too deterred by the long lines.  They move pretty fast.  If you are there with someone else, it helps if one of you waits in line while the other goes to get the bread.

While I was leaving, I noticed a Capital Seafood BBQ Express. Apparently, it serves fast food dim sum all day long! I wish I had known sooner.  Next time, I will plan to try that out as well.