by Kirbie
Jump to Recipe
1999 shares

Crispy, Chinese-style salt and pepper wings are oven baked rather than deep fried. The wings are then tossed in a garlic, salt and pepper mix. It’s a little healthier, easier to make and just as tasty as the traditional method. 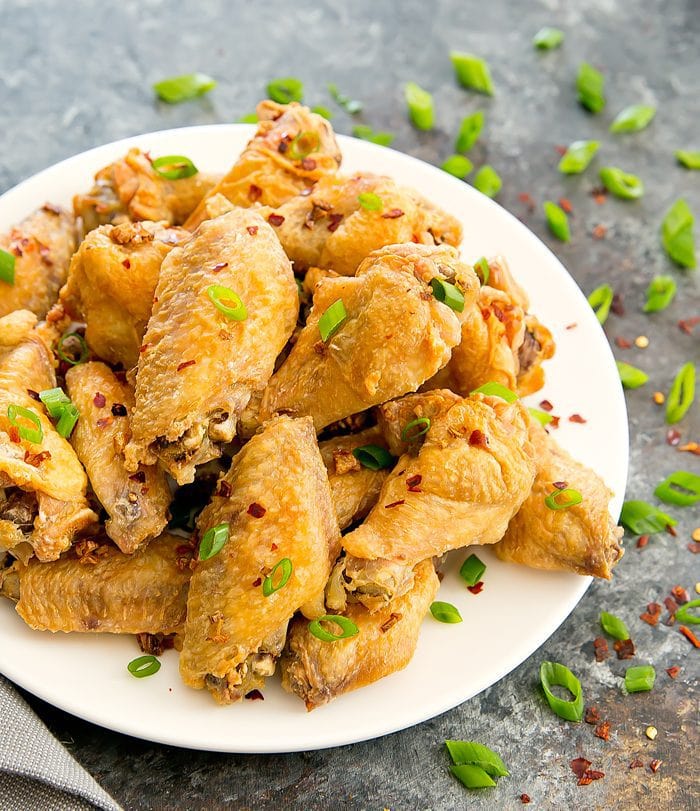 I’ve made them several times before as appetizers for parties or for dinner, but they are time-consuming and I don’t like frying foods when I can avoid it.

As you may recall, I recently discovered a fantastic recipe for super crispy baked chicken wings. I immediately knew I wanted to use that method to make my salt and pepper wings.

Salt and pepper seasoning can be found at Asian markets or you can make your own. Combine two parts black pepper, 1 part white pepper, and 1 part salt. 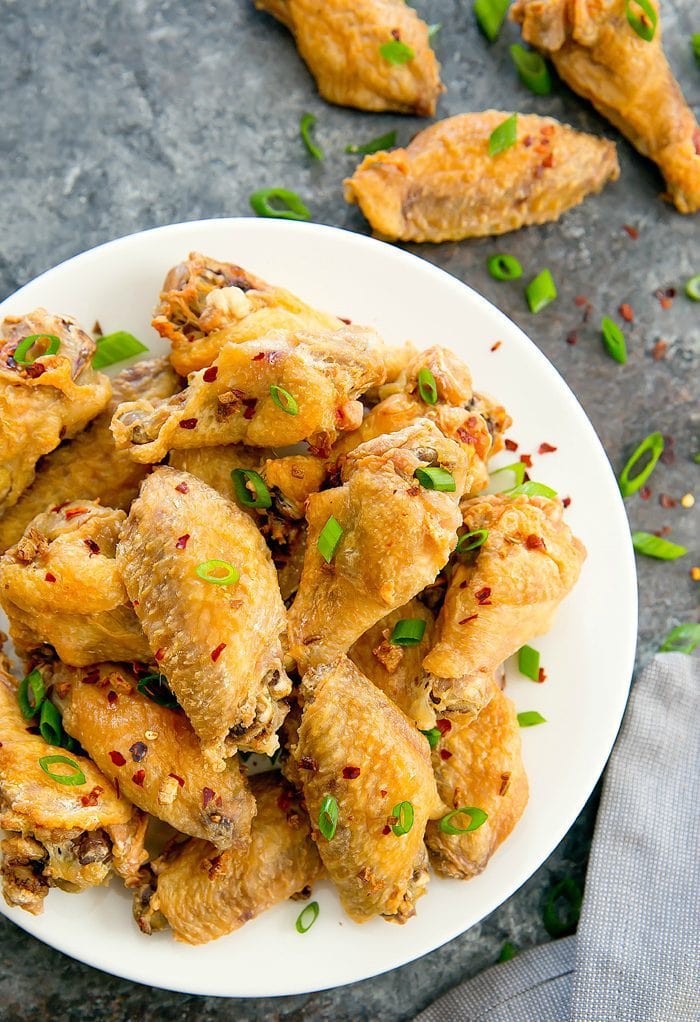 Preheat the oven to 250°F. Line a large baking sheet with foil or parchment paper. Place a wire rack on top and coat the surface with cooking spray.

Place the wings in a large bowl and sprinkle salt and baking powder over the top. Toss the wings until they are evenly coated.

Place the wings on the rack. They should be in a single layer and not touching. Place the pan in the lower half of the oven.  Bake the chicken wings for 30 minutes. They will shrink while they bake and will be very pale when they are done. 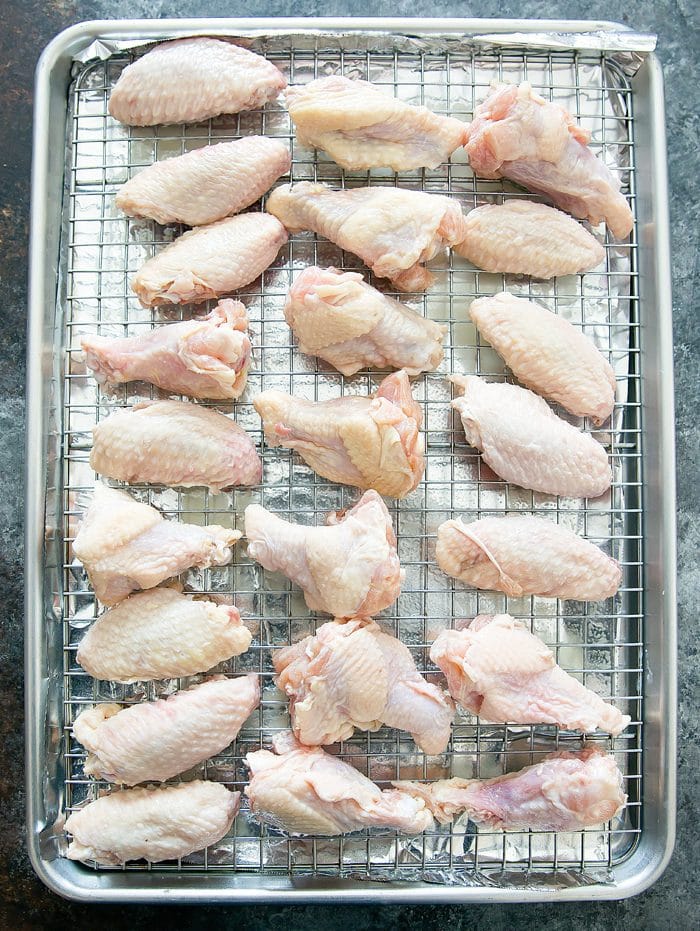 Increase the oven temperature to 425°F. Move the pan to the upper-middle part of the oven. Bake them for about 50 minutes or until they are golden brown and crispy.

Leave them on the baking tray and cool them at room temperature for 10 minutes. They will crisp up more as they cool.

In a  large skillet, pan, or wok combine the olive oil and garlic. Warm them over medium heat and cook the garlic until it’s browned and crisp. Adjust the heat to low and add the red pepper flakes and cook the mixture for about 30 seconds.

Add the cooled chicken wings to the oil mixture and toss to coat them evenly. Sprinkle the pepper and salt seasoning, green onions, and toss again to coat.

Transfer the wings to a large plate and serve. You can also garnish with more sliced scallions if desired. 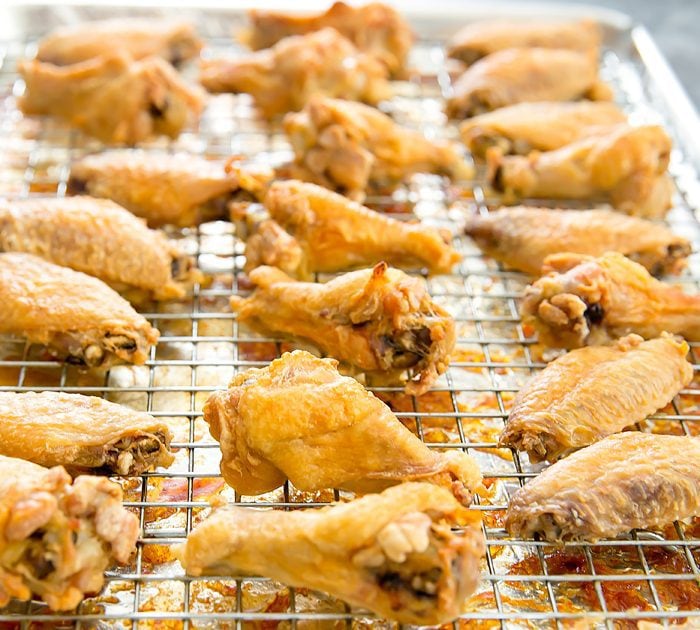 These came out wonderfully. Golden brown and crunchy, with all the flavors from traditional salt and pepper wings. I may never go back to making the fried version again.

As a side note, this recipe took longer to post than I expected. I made the recipe, I took my photos and then I ate my wings. And then somehow, my photos vanished.

I spent many, many hours going through each and every memory card but I couldn’t find them. And so I finally gave up because it would be faster to make them again than to continue looking. In all my years of blogging, I haven’t had something like this happen to me before.

And then the second time when I took the photos (I was extra careful and even had two cards recording the images), right after I finished, the memory card started to get an error. Luckily, my photos were still okay. But I was beginning to think this was a recipe that wasn’t ever going to be shared.

But I was determined to share this chicken wings recipe because I really enjoyed this easy baked method. 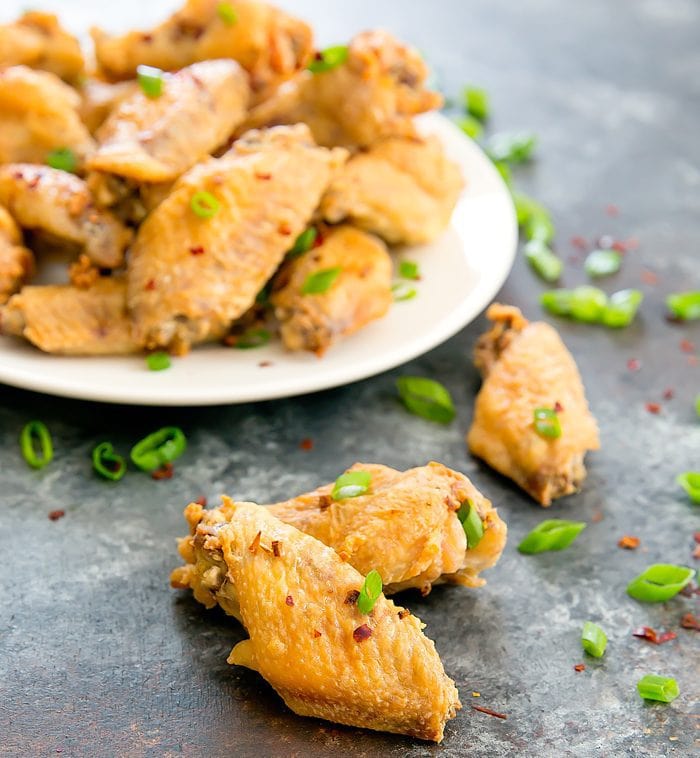 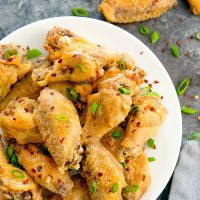 Did you make this recipe?I'd love to see it! Mention @KirbieCravings and tag #kirbiecravings!
1999 shares
Posted in: Appetizers & Side Dishes, Asian dishes, Chinese, Recipes
10 Comments // Leave a Comment »