The other day my friend asked me if I was interested in checking out some soul food.  He had a coupon he had bought from groupon.  I jumped at the opportunity.  I’ve been wanting to check out Bonnie Jean’s for a while now, and here was my chance.

I have to confess, I’ve never had soul food before.  I’ve read about it, seen it on tv, so I had an idea of what it was about.  From the outside, Bonnie Jean’s doesn’t look like much.  The inside has a very homey feel.  The place is decorated with quite a few paintings.  Boyfriend urged me to take pictures, but the pictures were too big to fit on my camera screen.  There is a shelf of board games for you to play while you wait for your foods, and a tv to watch as well.

The staff is very friendly, and exactly what I had imagined in my head as what a “soul food” restaurant would be like.  All the employees there talk with a slow drawl, and as soon as they spoke, I felt instantly transported from San Diego to the South.  I knew I was in for a good home cooked meal.

The menu is on their website.  The prices are quite reasonable.  Most dishes are about $10, and include sides and cornbread.  There were quite a few entrees involving fried chicken.  Since I love fried chicken, I couldn’t really read past those entrees.  Their food is also made to order.  So they don’t start frying the chicken until you order it, ensuring you get the freshest, crispiest chicken.  (The boardgames are for the wait while they cook up your food.)

We started with an order of their famous fried macballs, which were recommended as their most popular appetizers.  I had imagined little balls of fried mac & cheese, but instead we were greeted with three giant balls. 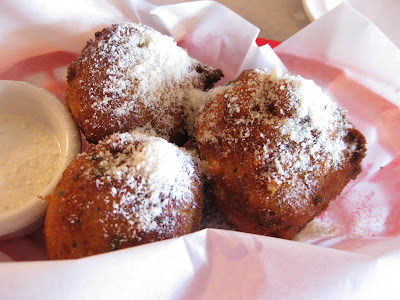 The batter was nice and light.  Inside was filled with gooey mac n cheese.  There were little bits of jalapeno, adding a nice kick to the cheesy mac.  My friend “S” and Boyfriend really loved the macballs.  I enjoyed them as well, though not nearly as much as they did. 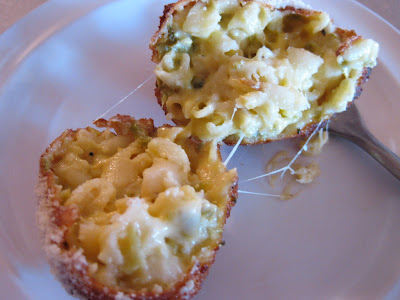 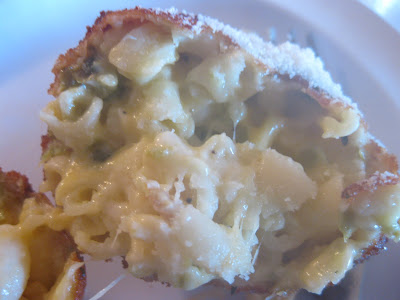 For my entree I got the chicken and waffles.  Unfortunately, I didn’t realize that this entree did not come with sides and cornbread.  Had I known earlier, I would have just gotten the chicken plate. 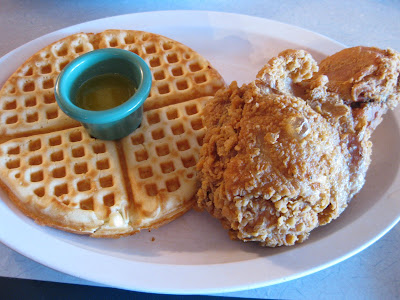 The chicken and waffles was served with two pieces of chicken (you get to choose dark or white meat, I chose dark).  The waffle looked a bit disappointing to me.  I like my waffles to be nice and thick.  This one was quite thin.  It was crispy though.

The chicken did not disappoint.  The outside had a thick crispy batter and the chicken underneath was still quite moist.  Surprisingly, this tasted very much like my mom’s fried chicken.  Who knew that all these years my mom’s been making soul food? 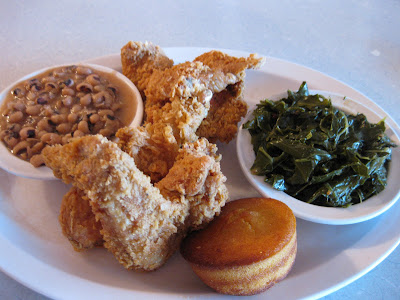 Boyfriend opted to try the smothered chicken: chicken smothered in gravy.  For his sides, he chose collard greens and candied yams. 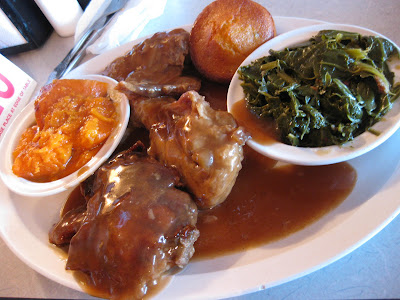 While Boyfriend enjoyed the gravy, he was sad that the skin wasn’t crispy anymore since it was smothered in the gravy.

S really loved his sides, eating all the collard greens and black eyed peas.  Boyfriend and I weren’t nearly as into the side dishes.  I think we just weren’t used to the preparation.  The collard greens are prepared with ham hocks and bacon.  I’m not a big fan of the ham taste, so I didn’t really like it in my greens.  The candied yams were super sweet, and then had an aftertaste of nutmeg.  I liked them, except for the nutmeg taste at the end.  Boyfriend just thought they were way too sweet in general.

Both Boyfriend and S enjoyed the cornbread, and the use of jalapenos inside.

We were quite full of greasy food by the end of our meal.  We left feeling quite satisfied with the meal and the service.  At the beginning of our meal, our server asked us if this was our first time here.  We told her it was.  She promised us that it wouldn’t be our last.  She was quite right.