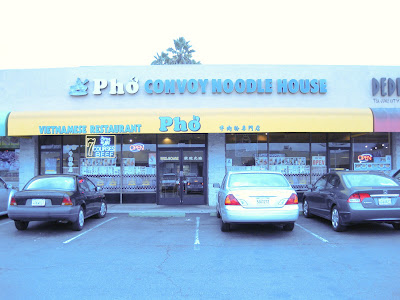 I know I've been a little sparse on San Diego food posts lately.  Between visits to LA, going home, and eating in more often, I just haven't had many dining out meals in SD.  I made a conscious effort to dine out this weekend.  Kirk of mmm-yoso did a post last week on the pho places in the Clairemont/Convoy area, which really had me craving pho.  On Saturday, the weather was pretty dreary and cold, making a nice hot bowl of pho sound even more appealing.

I had to go shopping for my hot pot dinner, so I was already in the neighborhood.  In Kirk's posts, he found that Convoy Noodle House to serve the best bowl of pho of the places he sampled in the area.  Usually I go to Pho T. Cali.  While not the greatest pho, I think it's pretty decent and is my favorite in the area.  However, my last few visits to Pho T. Cali have left me a bit unsatisfied, so I've been wanting to try another place. I've seen Convoy Noodle House and have thought about trying it a few times.  Kirk's good review gave the push I needed to check it out.

Normally after a good review from Kirk, I'm super excited to try out a place.  However, after I read Kirk's review, I noticed a comment from Dennis of A Radiused Corner.  He had a bad experience with the pho at Convoy Noodle House and talked about the large gap in consistency.  So while I still wanted to check out Convoy Noodle House to try something else for a change, I was the slightest bit hesitant as Dennis' comment stuck in my mind.  Can you guess where I'm going with this?

I arrived at Convoy Noodle House with Baby Bro and Baby Bro's girlfriend.  We were quite excited by all the menu offerings.  In addition to pho, there was a seven course beef dish and a few other specials, banh mi, some chinese-type noodle soup dishes, etc.

One thing that surprised me was that while the pho was cheaper than other places I've been to ($5.15 for a regular bowl), all the other dishes seemed pricier than other places.  I spotted a crispy fried egg noodle seafood and vegetable dish.  While I was here for pho, crispy fried egg noodles is one of my favorite dishes.  There used to be this great noodle place where I used to live in the Bay Area.  They had this delicious fried egg noodle dish that I ordered every single time and never got sick of it.  Since then I haven't found many places that make it as well.  Since Convoy Noodle House was charging $8.45 for it, it seemed like it should be good since it is kind of pricey.  Also the picture looked good.

So Baby Bro and I decided we'd split a bowl of pho and the crispy fried egg noodle. 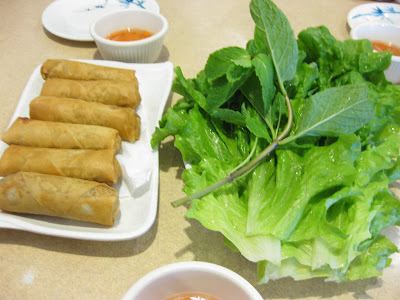 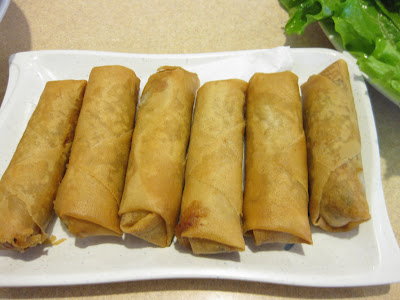 I thought the egg rolls were fried quite prettily.  The ones at Pho T. Cali are not nearly as photogenic. There was something slightly missing with the taste.  They weren't bad, but they weren't as good as the Pho T. Cali ones, at least for me.  It was missing a spice or a flavor.  It was a bit too mild in taste. 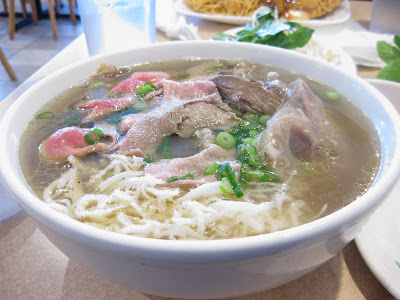 Baby Bro took a sip of the broth and said that it tasted a bit weird, kind of like the weird taste the UCSD cafeteria pho has.  I took a sip of the broth and double checked to make sure I had just sipped my pho broth and not my water.  The pho broth was extremely watered down in taste.  It was one of the worst pho broths I had ever had.  It reminded me a bit of some of the grocery stores ones you can buy to make your own.

There was a hearty amount of meat, tendon, etc, in the bowl, but the broth just didn't cut it.  I also thought that the plate of garnishes was a bit on the sparse side for 2 bowls of pho (Baby Bro's gf ordered pho as well). 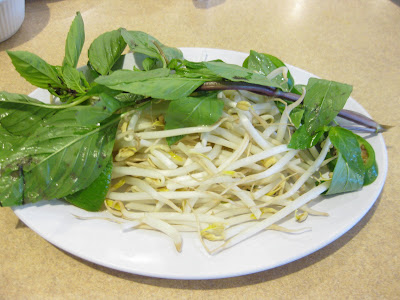 Then came my crispy fried noodles 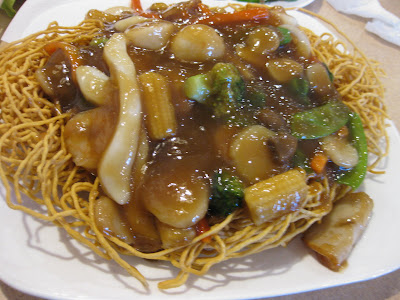 I was surprised by the sight in front of me.  And not in a good way.  This looked nothing like the picture or anything like how this dish is supposed to look.  The mess of thick brown corn starch filled sauce was anything but appetizing.

If you ever cook with corn starch, you know that a slight amount of corn starch can give a create a nice, thick sauce.  However, too much corn starch and you have a gooey, chunky mess.  That is what happened here.  Gooey bits of corn starch were stuck to every piece of vegetable and seafood, making this dish completely unappetizing. 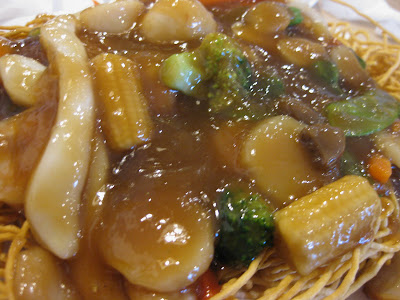 I tried as hard as I could to wipe off the corn starch guck, but it was impossible.  Baby Bro tried to wipe it off by dipping it in his soup, but it still wouldn't come off.

Then I tried the noodles.  One bite, and I contemplated very very hard about sending this dish back.  The noodles were definitely not freshly made.  They tasted like they had been sitting around, and someone grabbed it, put it on a plate, and then cooked the gucky brown mess and threw it on top of the noodles.

This dish is supposed to be made with a quick deep fry of these noodles.  The outside edges of the noodles usually remain very crispy, and the inside will turn soft because of sauce and ingredients placed on top.  The dish is pretty oily, but oh so good when made right. The noodles had a soft stale crunchiness to it, definitely not freshly cooked.  Also evidence that they hadn't just been made was the complete lack of oil on my plate: 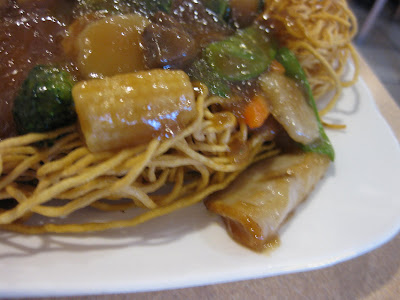 I'm not one to make a big deal about food I dislike.  I'll usually just never return.  I really thought long and hard about making a fuss.  I didn't want to eat another bite.  In the end, I chickened out and just didn't eat my dish.

While I'm sure Kirk did have a good experience while he was there, when I went, things were much different.  Much like Dennis' experience, things were bad enough that I can't imagine returning to give this place a second chance.