I used to frequent this place a lot to satisfy my Mexican cravings.  It’s relatively cheap and open 24 hours. When I come, I usually get the carne asada burrito, nachos supreme or carne asada fries.  I like how the carne asada is flavored here.  Very flavorful and not too salty.  (A lot of places make the carne asada too salty for me.) I no longer come here as often as I used to, but since Little Brother loves the nachos supreme here and is always asking to get it, we got some this weekend.

The nachos supreme is huge.  It is loaded with cheese, refried beans, carne asada, guacamole and sour cream.  I usually also ask them to add salsa, which makes them even tastier. 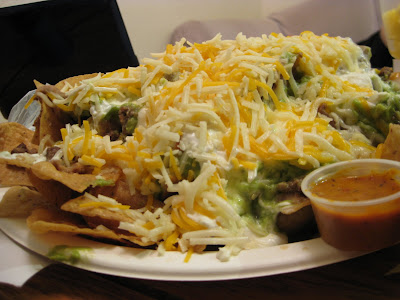 I used to share this with Boyfriend and we could never finish it.  We had five people eating it the other night though, so we easily finished this.