Cowboy Star may be one of the best hidden gems in the San Diego restaurant community.

In some ways it’s not very hidden. I’ve heard nothing but rave reviews from all those who have dined there and it has over 400 yelp reviews. However, it’s hidden in its unassuming name and decor, the appearance that it only specializes in steaks, and reservations are still relatively easy to come by.

I usually prefer to drive up to LA for most of my fine dining experiences because the restaurants in San Diego simply don’t compare. Cowboy Star is one of the few exceptions, serving up dishes that rival those of some of the fancy hyped up places I’ve dined at in Los Angeles.

We recently dined here for San Diego Restaurant Week.  The main dining room is in front of an open kitchen. I was hoping we’d get one of the large oversized booths, but instead we were led into a small private room with a handful of tables. While I enjoyed the quiet and intimate atmosphere of this room, the lighting was a serious issue– and not just for photo taking. It was so dim that it was bothering my eyes to even focus on reading the menu. And there was a bluish glow to the room because of a blue lit wall in the back of the room. I really hope Cowboy Star reconsiders the lighting of this room as it was definitely bothersome. 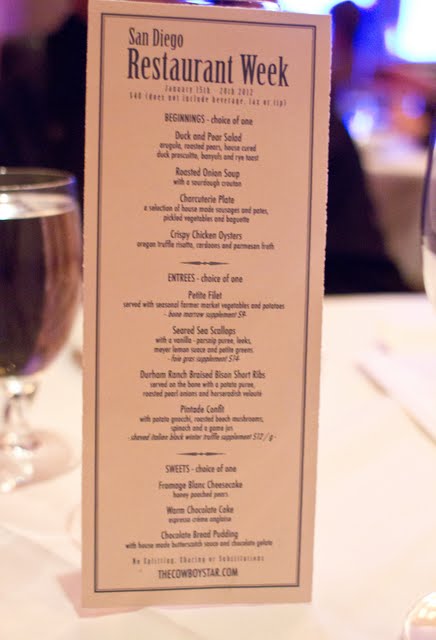 For SDRW, Cowboy Star offers a 3 course prix fixe menu for $40. In addition, there are supplements to each dish as an option, for an additional price. The supplements are items like truffle and foie gras, something I see a lot at the fine dining places in LA, but not often in San Diego. 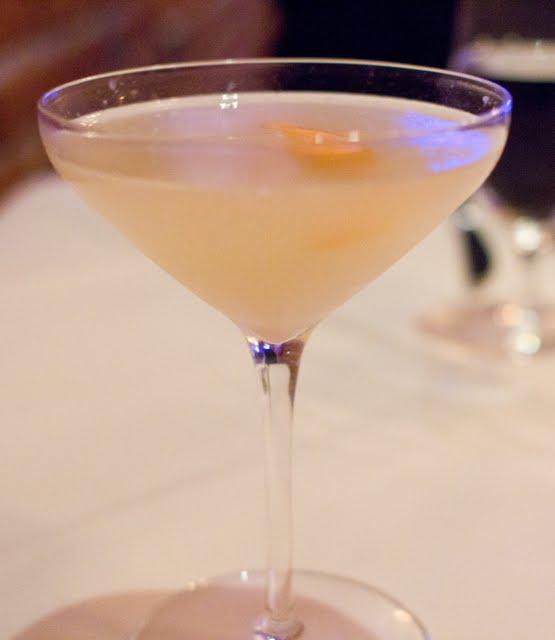 After we ordered we were served a complimentary amuse bouche. Another practice we see in LA but not often in SD.

One bite of this and it cleared up my grumpy mood about the lighting. I don’t recall exactly what it was, but it was some kind of smoked fish served on a crouton. Delicious. 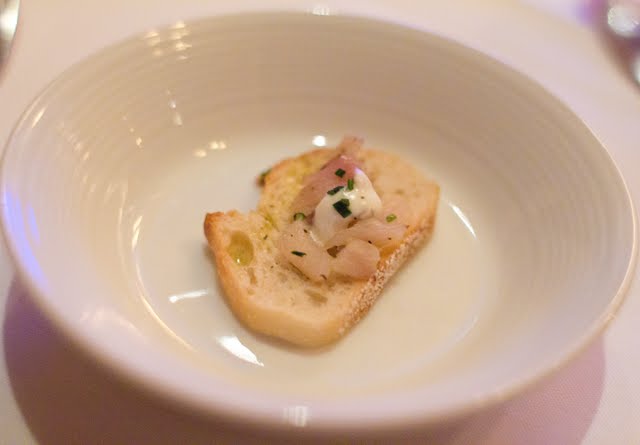 Instead of being given a basket of bread, a server comes around, asking if you want bread. If so, a hot bread roll is served to you. Again, much like the practices in LA. 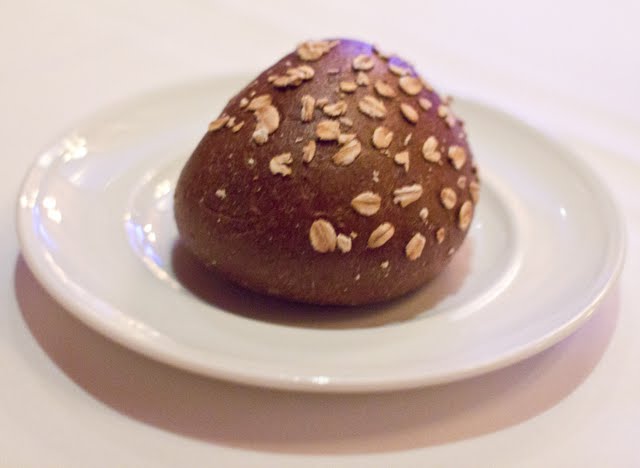 The bread was fresh out of the oven: crispy on the outside and soft on the inside. The best way to eat and serve bread in my opinion.

Charcuterie Plate
a selection of house made sausages and pates, pickled vegetables and baguette 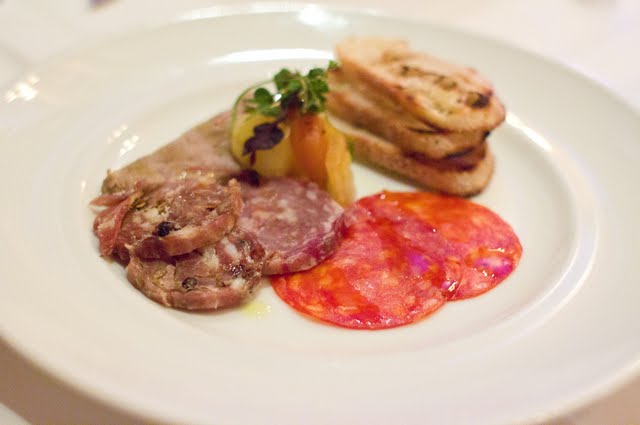 FH and I both wanted this one and we weren’t disappointed. The house made sausage and duck pate were both delicious. The pickled onions were tasty too. We liked everything on the plate. 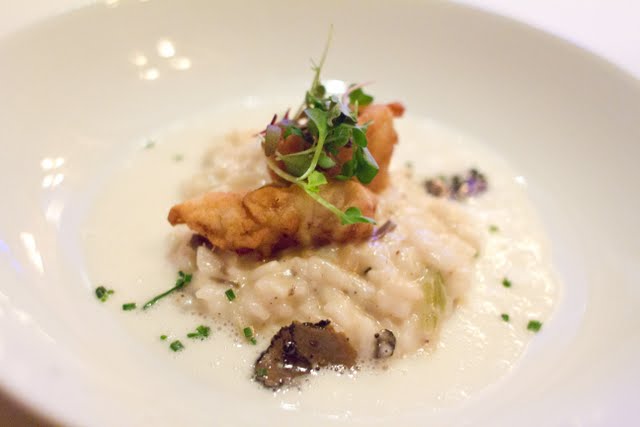 Since FH stole my starter choice, I went for my second option. This one ended up being equally as impressive. The chicken oyster is actually just dark chicken meat. It was crispy, juicy. It didn’t really resemble oysters in any way but it was still good. The risotto was cooked just right and the flavors were mouthwatering. 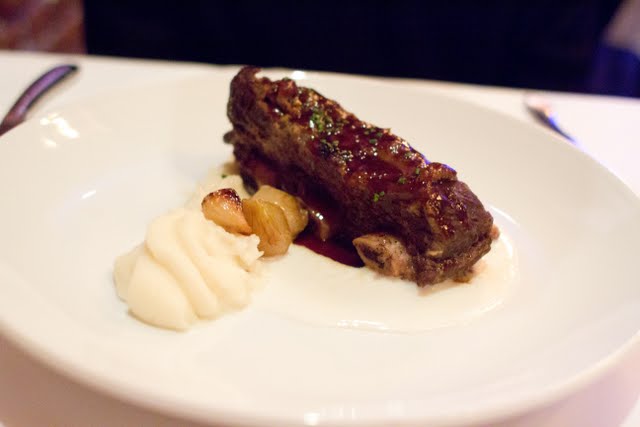 I wasn’t too crazy about the short rib. After everything else, I guess I expected more. I’ve had pretty good short rib dishes at other places. I felt the cut of meat was just too fatty, the meat not tender enough. 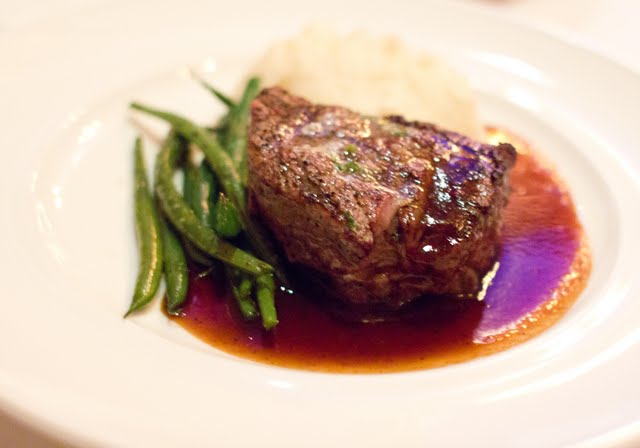 I enjoyed this much better. I asked my steak to be cooked a medium rare. It was a hair overcooked. More like a medium rare plus. But it was still very good. The balsamic reduction was flavorful and had a good acidic balance. I usually am not much of a fan of balsamic reduction. My steak was served with crisp french green beans and creamy mashed potatoes. The sides were a little more standard steakhouse fare and nothing too special. 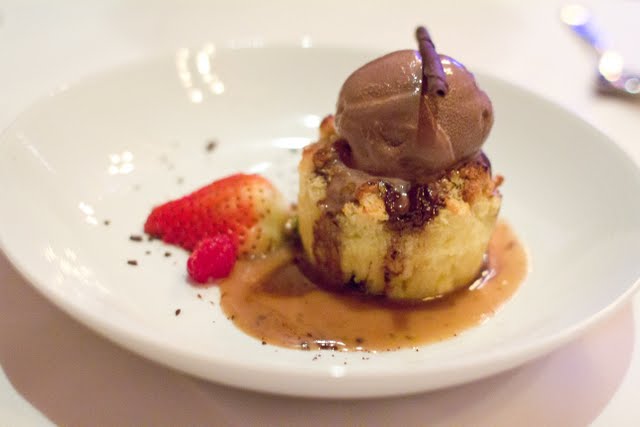 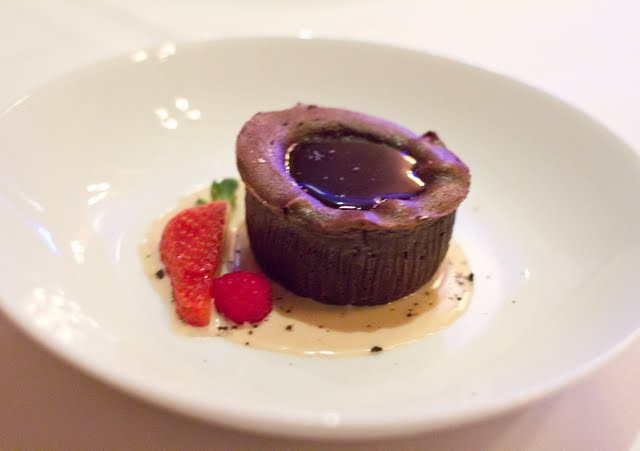 I was a little disappointed in this. The “warm” cake was tepid/room temperature at best. The lava cake was still gooey and melted in the center, but it seemed like it had been sitting out too long before being served.
Towards the end of our dinner, they seated a large party in the small room. Suddenly it got really loud in the room. On top of that, the servers or someone in the restaurant decided to crank up the music as well. It made conversation completely impossible. FH and I shouted a few sentences before giving up on conversation completely. Luckily we were already almost done with dessert when this occurred. Any earlier and I would have been much more annoyed.
Despite some hiccups, we enjoyed dining here and were very impressed with the food. Cowboy Star is definitely not just a steakhouse.  It excels at many dishes, with execution and flavors we don’t usually experience dining in San Diego.