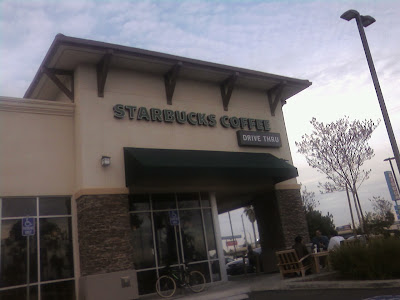 Normally I would not blog about starbucks, as there are a million locations and I’m sure everyone’s been to one at some point or another.  But this one located on Convoy is the only one I’ve seen so far that has a drive-thru.  My brother always gets excited when he sees this, so I thought I would write a short blog about it.  It’s your typical Starbucks, except that it has a drive-thru option.  Though now that I think about it, it would be pretty nice if more Starbucks had this option.  I don’t normally do drive thru, as it’s only a couple of steps to the fast food place I am going to.  But if I’m wearing heels, in a rush and it’s cold outside, I don’t really want to go park in some plaza and get my Starbucks, I would much rather do the drive-thru option.  Especially since most of the Starbucks near me do not have their own parking lot, but are instead located in a shopping plaza with many other stores, so I often have to park a bit far away.