If you’re still thinking of where to dine during Restaurant Week, I highly recommend checking out Grant Grill, located inside the historic US Grant hotel. (It’s also a good choice for fine dining even if it isn’t Restaurant Week.)

When perusing through the Restaurant Week dinner menus, Grant Grill really stood out. Normally there are one, maybe two, interesting dishes I’ll see on a Restaurant Week menu, but I wanted to try almost everything on Grant Grill’s menu, with unique offerings like lamb bacon, turkey pate, and dry aged duck. 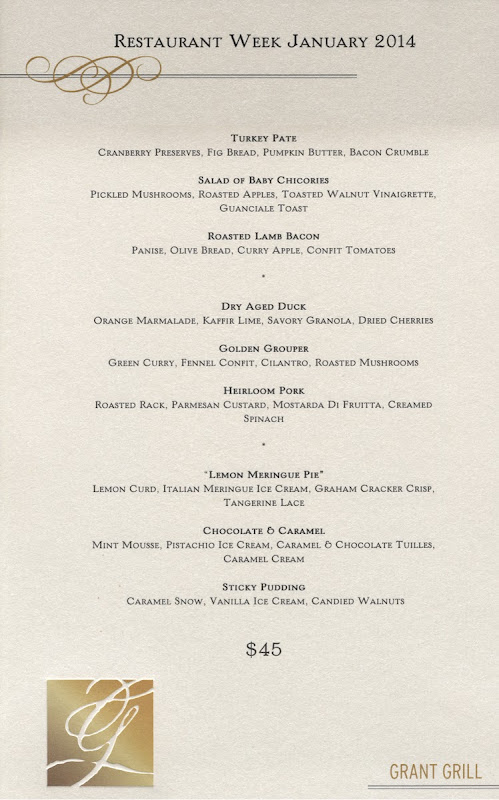 As luck would have it, I was extended an invitation to preview Grant Grill’s restaurant week menu. I’m very glad I was able to accept it. While I’ve visited the luxurious hotel on several occasions, I’d always brushed Grant Grill aside as a restaurant meant for tourists and an older crowd. I was happily proven wrong.

Since the renovations seven years ago, the hotel not only was reinstated to its former glory, but Chris Kurth (formerly of The Lodge at Torrey Pines) was hired as Chef de Cuisine and he has been turning out innovative dishes focused on seasonal ingredients ever since.

During restaurant week, guests can choose from the special restaurant week menu or dine from the current winter, volume 1 menu. This of course, just made decision making even harder. Not only was I drawn to everything on the restaurant week menu, I was equally intrigued by the regular dinner options, especially with appetizers like quail, sweetbreads, and pork belly; and main entrees like 38 day dry aged rib eye. 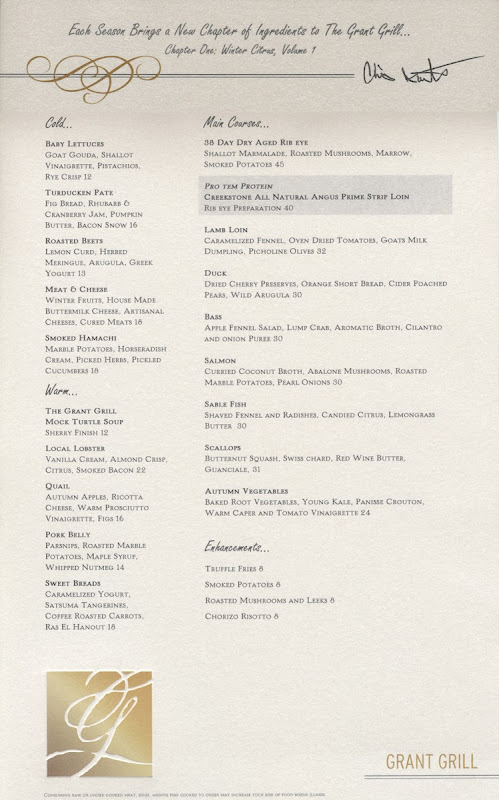 After much contemplating, we decided to leave the decision making to the Chef. He pulled highlights from both menus, giving us smaller tasting portions of each dish. 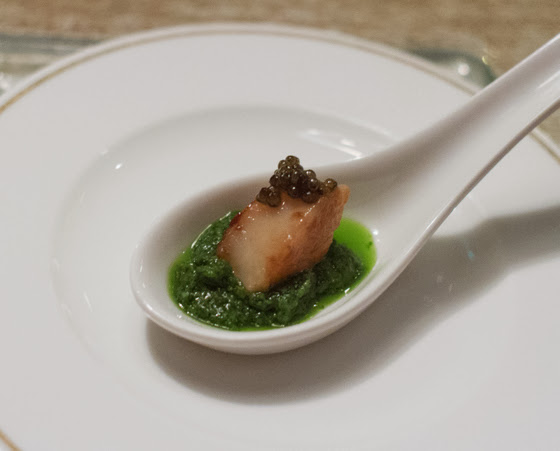 All dinner meals start with an amuse bouche. Ours was a spoonful of delicately seared scallop. 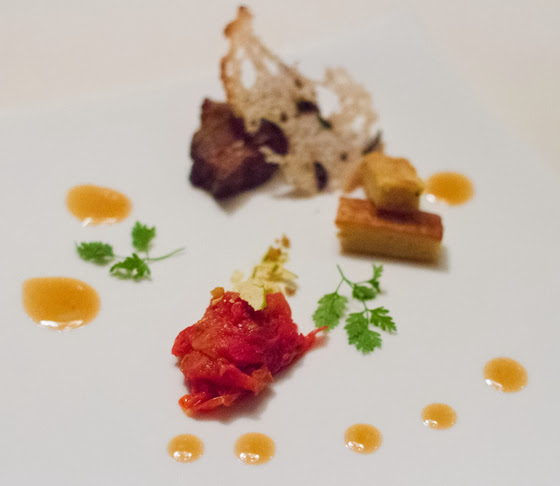 This is one of the starter choices from the Restaurant Week menu. Each of the menu items follows a pattern of featuring five items, rather than just one. 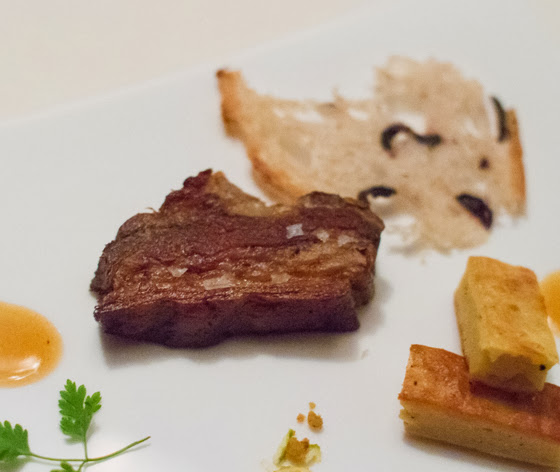 Like a painter’s palette, we were able to nibble and sample each of the items. I especially liked the crispy panisse, made of smashed chickpeas. Of course, the highlight of the plate was the roasted lamb bacon. The lamb bacon looked remarkably similar to pig bacon, and tasted– without trying to state the obvious –like pig bacon but with lamb flavor. It was actually more remarkable that it sounds. Having experienced turkey bacon before, I’d been under the impression that trying to replicate the essence of pig bacon was impossible without a pig. 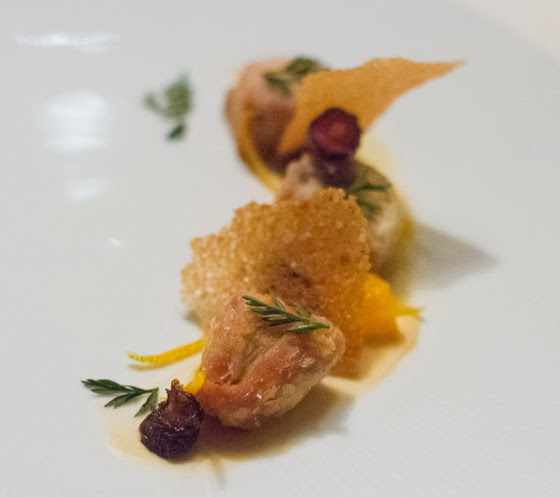 This was from the winter menu and is worth a consideration as an extra appetizer even if you are sticking to the restaurant week menu. I’ve tried sweetbreads about half a dozen times in the past, but this was by far my favorite preparation. Lightly battered, the sweetbread were flavorful, with a velvety soft texture. What made the dish more pleasurable were the elements interspersed between the pieces of sweetbreads. Intense ras el hanout seasoned crisps, sweet bursts of satsuma tangerines, an unexpected delightful bittersweet pairing of coffee roasted carrots. 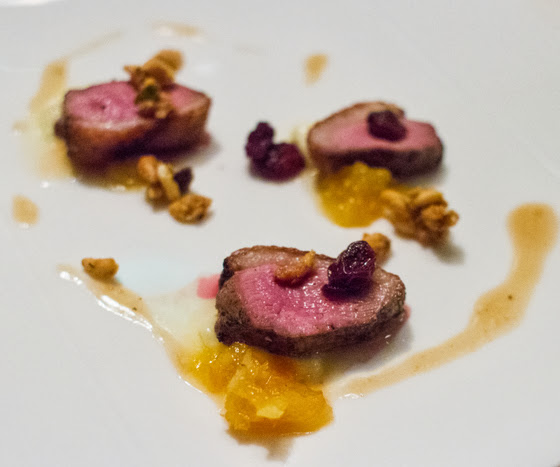 From the restaurant week menu, this was my top choice of dishes to try. The duck was succulent with smoky edges. However, I found the orange marmalade too sweet and an odd choice. 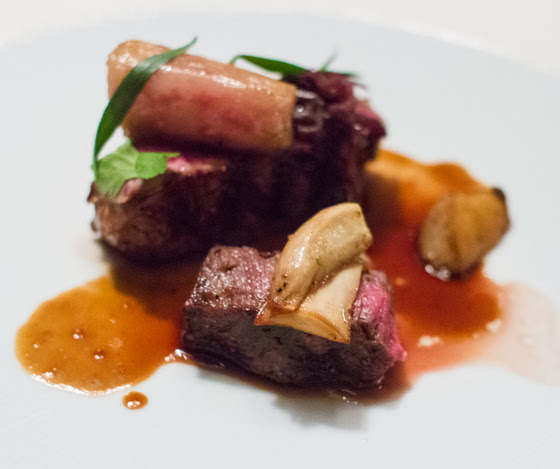 For our final savory course, we were treated to dry aged prime rib eye, flavored with bone marrow. The culled out bone marrow sat atop of the steak, an absolute gift for any bone marrow lover. 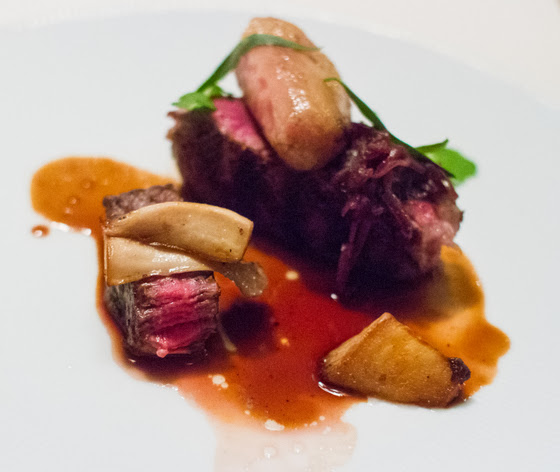 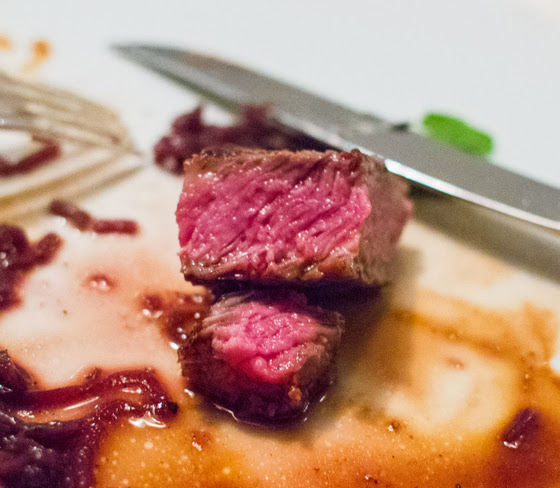 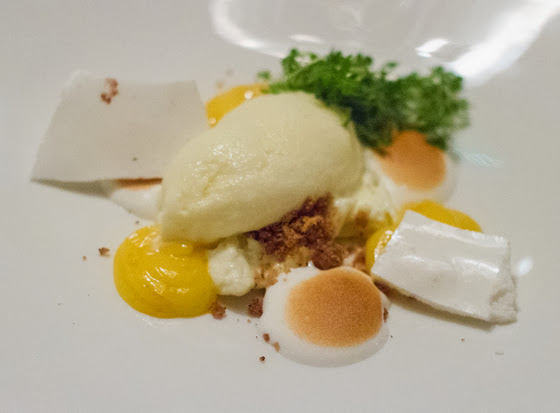 We were presented with two desserts from the restaurant week menu to end out meal. While there is no pastry chef, Chef Chris Kurth insists on making all the desserts in-house. This deconstructed dessert was tasty, though I found the Italian meringue ice cream a little hard to get used to with its gooey and almost chewy texture. 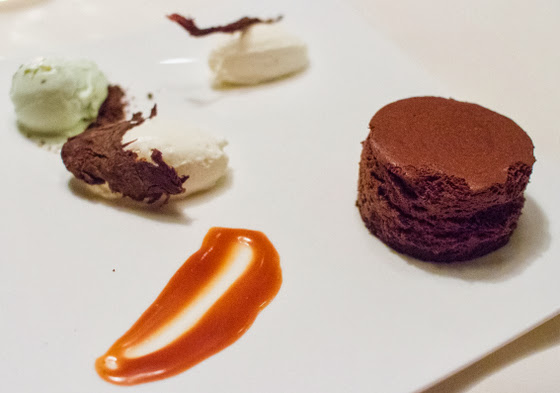 We both preferred the chocolate themed dessert. I especially liked the chocolate tuiles that cupped the whipped caramel cream. They looked like ordinary chocolate bark but were actually thin, crisp buttery cookies. 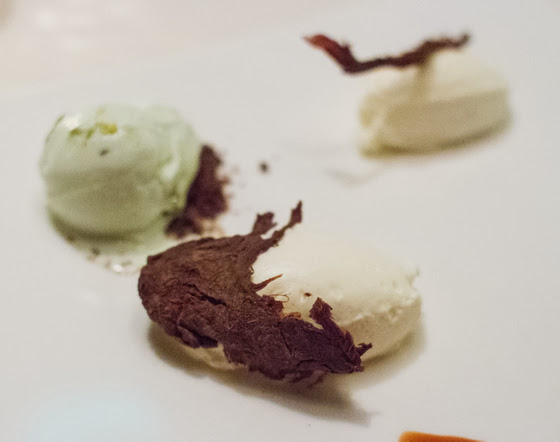 Overall, we had an impressive meal here and will definitely be back (especially since we learned of their Sunday waffle buffet). With its crisp white linens and shimmering gold menus, the restaurant has an air of timeless elegance. The menu though, is unmistakeably modern and the chef’s passion is translated through the menus he thoughtfully curates. The staff was also attentive and quite well versed in all the dishes and preparations.

As indicated above, we were invited to preview the restaurant week menu and the meal was complimentary. I was not further compensated for this review and my opinions are my own.