As I mentioned in an earlier post, my friends T and M drove down for a visit this weekend. On one trip when they were here, we ate at Hash House for dinner and they really liked it. Ever since then, I’ve been wanting to take them for brunch, since that is what Hash House is really known for.

For those not familiar with Hash House, it’s known for it’s enormous quantities of food as well as some twists on some classic “farm food” dishes. The individual plates are huge, and are typically the type of plates you would use to serve a platter of food to a large group of people. 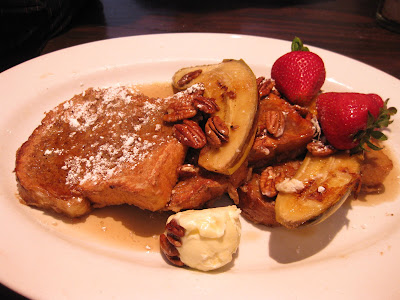 M ordered one of the hashes; I don’t remember which one. 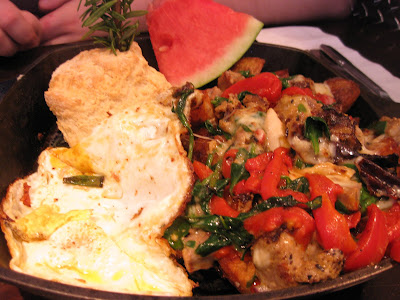 Boyfriend ordered the wild boar scramble. You could taste the wild boar, which was quite gamey. I liked the crisp green beans and the crispy potatoes.  The watermelon was also really sweet. 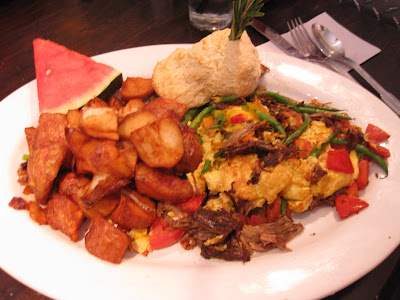 I ordered the mango and coconut flapjack, which came with a side of eggs and sausages.  The pancake was so thick, I was only able to eat about a fourth of it. 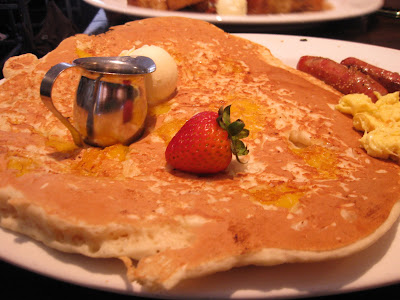 Everyone left with a ton of leftovers and happy with what they ordered. Previous Hash House visits can be read here, here and here. The only thing bad is that the wait is pretty long on Sunday, since it’s so popular. They also serve brunch on Saturday and they take reservations on Saturday. So if you can, I’d recommend visiting on a Saturday.