"Hash House again?" you ask.  Yes.  Hash House again.  My previous Hash House posts can be found here and here. Whenever I discover some new place I enjoy where there are lots of other things I want to go back and try, I kind of get obsessed with the place until I've tried all the things I wanted to try.  When I discovered Sakura, I went three times that month.  Since rediscovering Extraordinary Desserts and passing by it often, I've been there five times.  So, that is why I went to Hash House again, for the third weekend in a row.  And I have finally got it out of my system.  For a while.  Not that this was a bad experience.  But I already tried all that I wanted to try, and now I'm no longer in the mood for giant fluffy flapjacks.

Because I had made reservations, we were seated at the cool odd-shaped metal table with fluffy pillows and seats.  This time we were presented with the regular menu and a special menu of today's specials, which I had not gotten on my last visit.

After loving the mango coconut pancake, I had to get it again.  So I got one for the table to share even though I know we wouldn't need any extra food that day, with the giant portions they serve here. 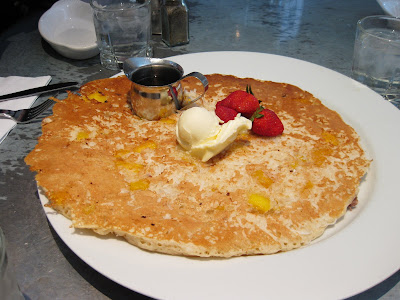 I was again amazed by the size of this flapjack.  The plate it is placed on is a huge serving platter.  And it fills up most of the platter!

Here is the pancake next to a packet of splenda for comparison: 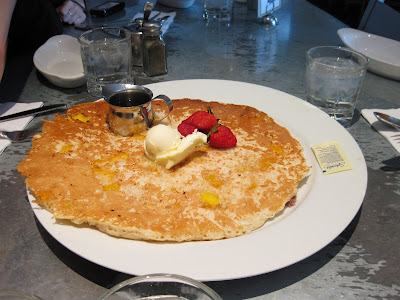 Little Brother ordered the pork tenderloin sandwich.  It's basically this massive portion of fried pork steak sitting on a regular sized bun.  The bun looks tiny though since most of the sandwich doesn't fit on the bun!  It was served with some yummy criss-cut fries. 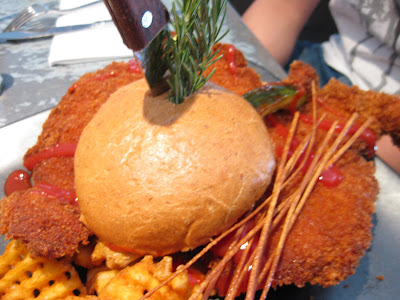 I opted for the Scramble of the Day.  It had venison sausages.  The sausages were very flavorful and gamey, but I enjoy gamey meats.  The crispy potatoes were very crispy.  Usually I don't like crispy potatoes because they aren't crispy enough for me, but these were so crispy they were almost like fries, so I enjoyed them.  The biscuit was once again tasteless. I don't understand how they can make such great dinner biscuits and such bland tasteless lunch biscuits. 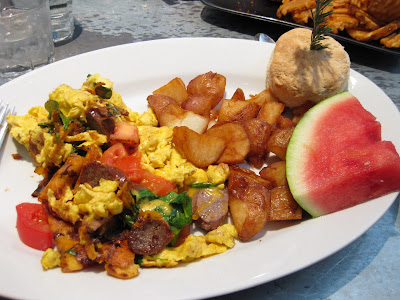 Little sister also ordered off the specials of the day menu.  I don't remember what it was called, but it was basically crab cake served over griddled mashed potatoes, spicy mayo, eggs and tomatoes.  The crab cake was pretty big.  It was your standard tasting crab cake with lots of breading. 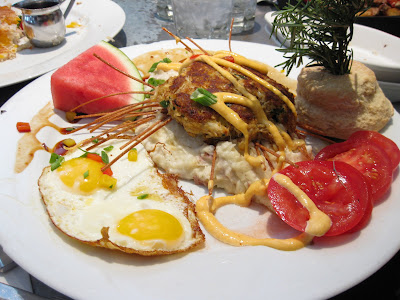 Baby brother ordered another special of the day that had deer meat! I had a bite of it, but I couldn't really taste the difference in the meat, whereas I definitely tasted the difference with the venison. 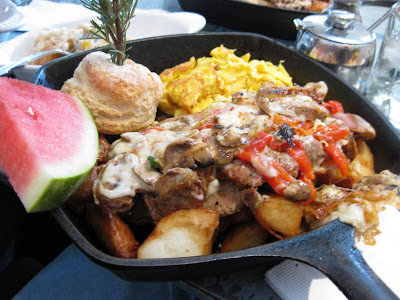 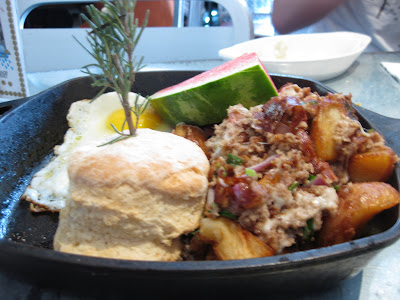 Finally, Boyfriend got the chuck roast scramble.  I  told him I thought he would enjoy it and so he ordered it.  And I was right.  Tender pieces of pork.  Chipotle sauce.  Yum. 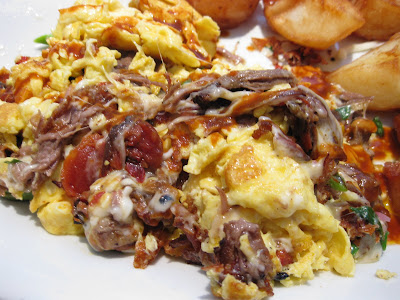 We were so stuffed after this and had lots of leftovers.  The one hitch in our experience was the waiter.  While I have loved the service the past few visits, this time it wasn't as great.  Our waiter was very attentive about refilling our water, but he had this thing, where he kept spilling water everywhere when he refilled our glasses, and he never apoligized and never mopped it up!  I also didn't get a genuine friendly vibe from him.  He was going through the motions, but didn't really care much about our table.