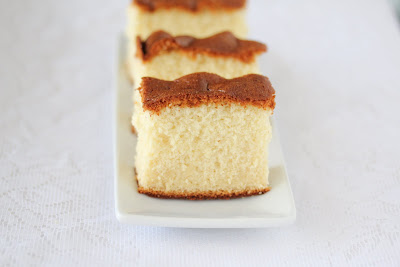 They say third time’s the charm… About a month ago, I posted that I was going to give up trying to bake a successful castella cake. For those of you who have never heard of castella cake (also called Kasutera cake), it is a popular Japanese sponge cake that has a texture which is quite different from typical Asian sponge cakes.

I’d had two failed attempts and the only recipe that seemed promising also seemed very complicated. I had just bought some castella cake at my local Japanese market and it tasted good and only cost me $4. Why waste my time trying to bake my own?

But I got a rush of comments and encouragement, and I decided to give it just one more try…and this time it worked! I was so thrilled. I put off checking on my cake for the longest time. I was so afraid it had collapsed like my previous attempts. But when I finally took a peek, it was perfect. 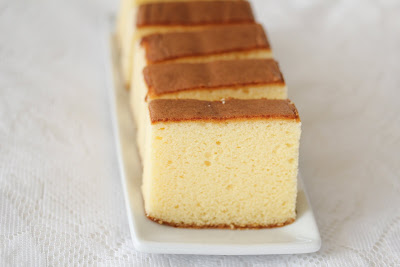 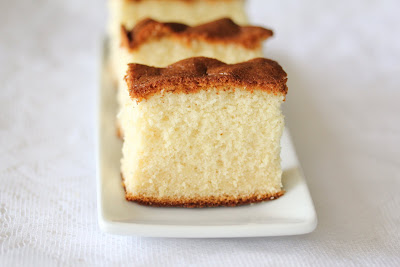 There are a couple of things that make castella cake unique. For one thing, it doesn’t use any oil. No oil at all! You would think the cake would come out dry, but it doesn’t. You don’t miss the oil at all. The other thing that is different is the texture. Most Asian sponge cakes have a light airy texture achieved by mixing egg whites into the batter. Castella cake actually is not light or full of air. Instead, the crumbs on the cake are actually compact and tight. The texture actually creates a little bit of a bounce. It’s hard to describe if you haven’t eaten it before, but if you have, you probably know what I am talking about.

The key to baking a successful castella cake is in the eggs. The eggs must be beaten for a very long time over a pot of warm water which keep the eggs warm. The warm eggs are then able to achieve a meringue-like state which makes delicious castella cake that doesn’t collapse. When I first read about having to stand over a stove with a mixer for 15 or more minutes, I thought there was no way I was going to go to all that trouble.

However, the Boyfriend made a rare appearance in the kitchen and decided to do that part for me. It really helps to have a baking assistant. I did realize though that even if he wasn’t around, I could do this myself next time and not feel like it is too complicated. Yes, the eggs take a while. But once you finish the eggs you are almost done. There are so few ingredients in a castella cake that the hardest part of the preparation is the eggs. Then you whisk in some sugar, milk, honey and flour and it’s ready to go in the oven. So overall, the time to prepare is about the same time to prepare other dessert recipes.

What I learned about the eggs is that you want to beat them until they reach a stage where you could draw a letter on the top of the batter with your mixer and the letter would stay on the surface for a few moments before eventually sinking back down. I also noticed that the color of the eggs changes from a pale yellow to almost a white color. I think we ended up beating the eggs on low speed for about 15 minutes before we achieved what we were looking for. We used a hand mixer. We put the bowl of eggs on top of a pot of water. I had previously boiled the water, turned it off, then while the pot still had some steam coming out, I placed my bowl of eggs on top. You don’t want it to be too hot because you don’t want your eggs to cook. About halfway into the mixing, I felt like the pot had cooled down too much, so then I turned the pot on very low, so it didn’t actually boil but began to create some steam again to keep the egg mixture warm. 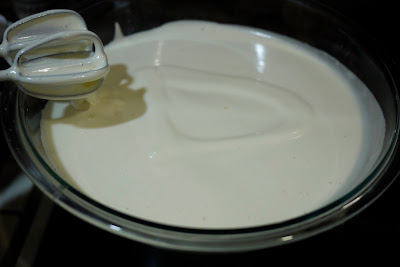 Another problem I encountered was cutting this cake. The cake is a little bit sticky because of the honey. I wanted my cake to slice perfectly. Perhaps I should have used a very big sharp knife. I was tempted to use my brother’s sashimi knife. Instead, I used a small sharp knife. And I cut very very slowly. Sort of like slowly peeling off a bandage. So with my knife, I only cut into the cake a little at a time. I kept running my knife back and forth into the cake, but doing it almost like a saw motion and only digging in a little more at a time. I also wiped down the blade after each slice was completely cut. This seems to help create the effect I was looking for and my cake did not come out looking all ragged and uneven, but it’s still not perfect.

Another thing you must do with this cake is refrigerate it right away so that it does not dry out. This is one of the reasons it’s hard to prevent collapsing. Normally a trick to preventing collapsing is allowing the cake to cool gradually by opening the oven door for about 10 minutes before taking the cake out. However, you don’t want the castella cake to cool at room temperature. You want to refrigerate it almost immediately. I took mine out and immediately it began to collapse. Within two minutes, or as soon as I could kind of handle the cake, I put it in a Tupperware container, sealed it, and put it in the fridge and didn’t touch it until the next morning. 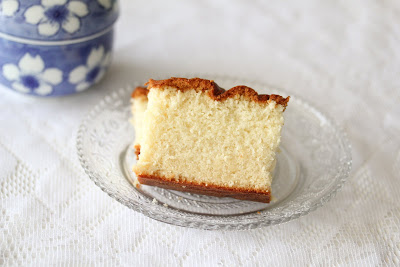 I’m going to make this again for my parents. I also want to try a matcha version which is a popular flavor I often see.

I got my successful baking tips from The Little Teochew, you should definitely check out her post. The recipe is actually here.  And you can see a really cool video that shows how they hand mix this cake in Japan here! I can’t imagine hand mixing the entire time.

If you’re looking for a baking project that’s a little easier be sure to check out my Chinese Sponge Cakes!

Servings: 1 (8-inch) cake
Prep Time: 30 minutes
Cook Time: 50 minutes
Total Time: 1 hour 20 minutes
Course: Dessert, Snack
Cuisine: Japanese
Castella cake is a popular Japanese sponge cake. The key to making it at home is in preparing the eggs which are whisked over warm water until they hold soft peaks. This is what gives the cake it’s tight and spongy crumb. Castella cakes can be tricky to make so be sure to read my post as well as the link I’ve shared in the recipe notes.
Print Pin Rate

Did you make this recipe?I'd love to see it! Mention @KirbieCravings and tag #kirbiecravings!
Posted in: Cakes, Recipes
21 Comments // Leave a Comment »