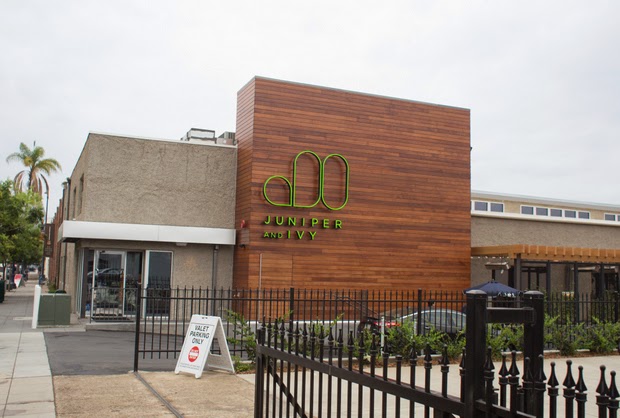 We recently had a wonderful meal at Juniper & Ivy. This was our first chance to circle back since our initial visit shortly after the restaurant first opened. After our last meal, we left with regrets of dishes not ordered, but not this time. On this night we made sure we tried everything on the menu we had been wanting to.

It was particularly fun to watch the first episode of Top Chef Duels last week, which featured Richard Blais, having just recently been to Juniper & Ivy. I spent most of the episode exclaiming “Hey we had that burger!” or “We had that dessert” and “Look, those are the plates from Juniper & Ivy.”

First things first. When we made our reservations, we requested Chef’s Counter seats, which are arguably the best seats in the house. You sit right up next to the massive kitchen and get to see everything in action. You can have a group of up to four at the Chef’s counter. For larger groups, they have two Chef’s tables that are situated very close to the kitchen and provide an unobstructed view. 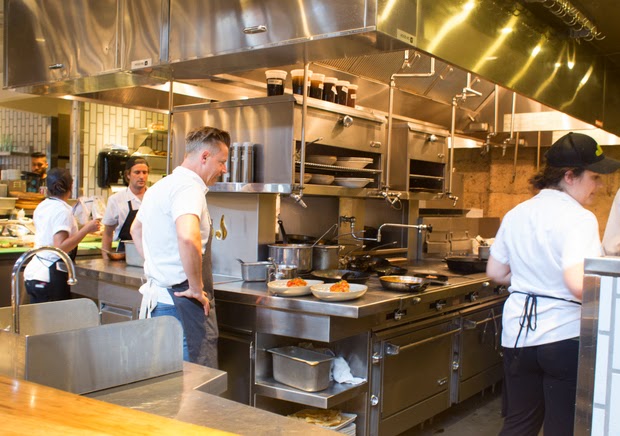 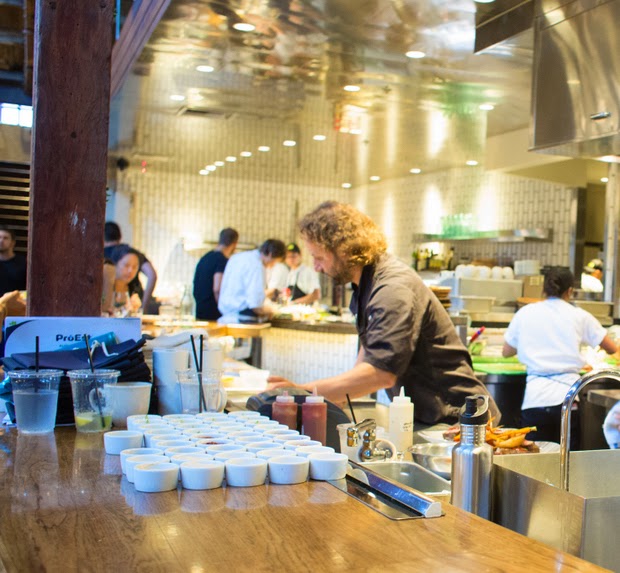 Our favorites from our first meal came from the snacks, raw, and toast portion of the menu, so we again focused in on those items, which are great for sharing. 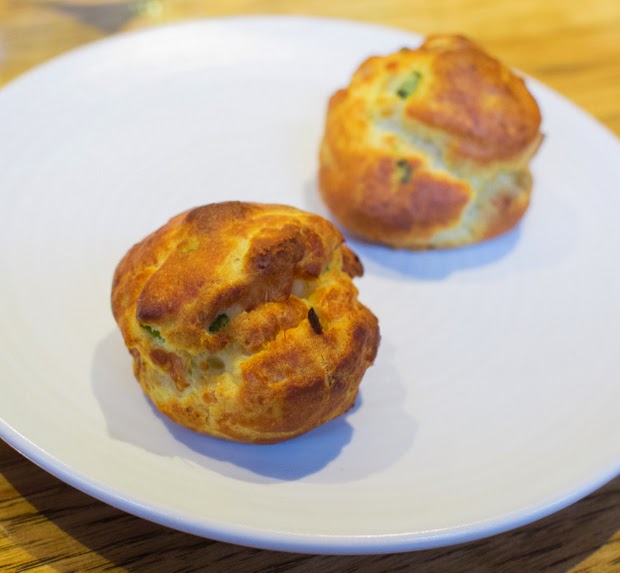 We were first served an amuse bouche. Gougères are basically French cheese puffs, which I’ve made on this blog before. 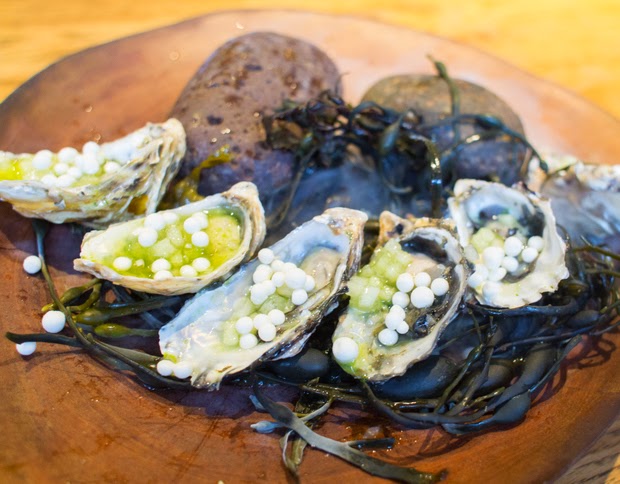 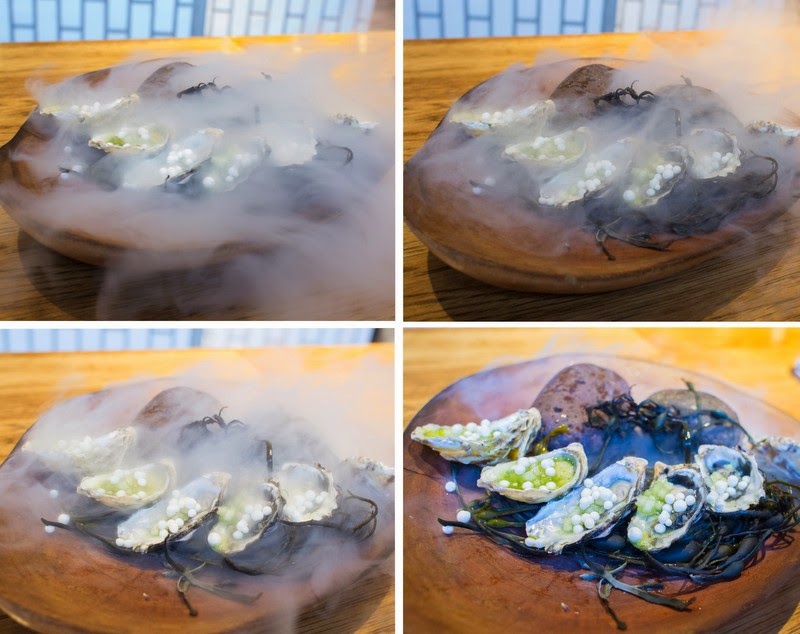 Fresh oysters were accompanied by horseradish pearls and melon mignonette. The melon added a pleasant summery sweetness to the oysters, and this was a great way to start the meal. 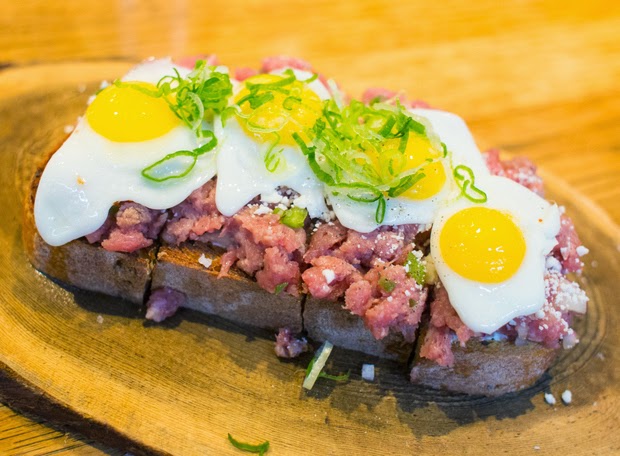 We have dreamed about ordering this item since seeing it on our first visit but failing to order it. I was so excited it was still on the menu. The beef and cotija make a creamy combination and the miniature sunny side up quail egg on top of each slice gave this such a great presentation. The prettiest dish of the night in my opinion. 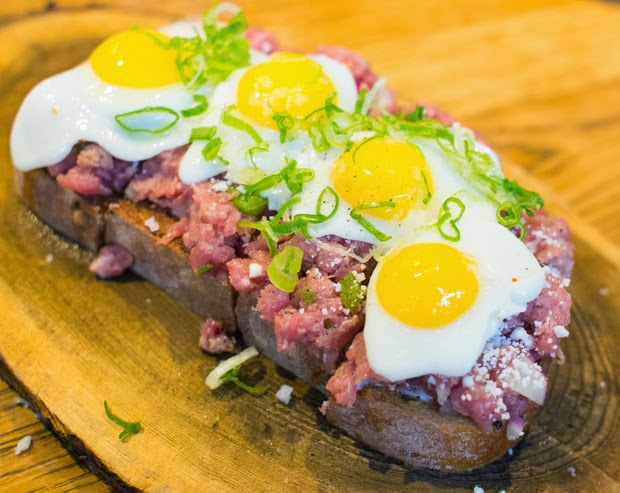 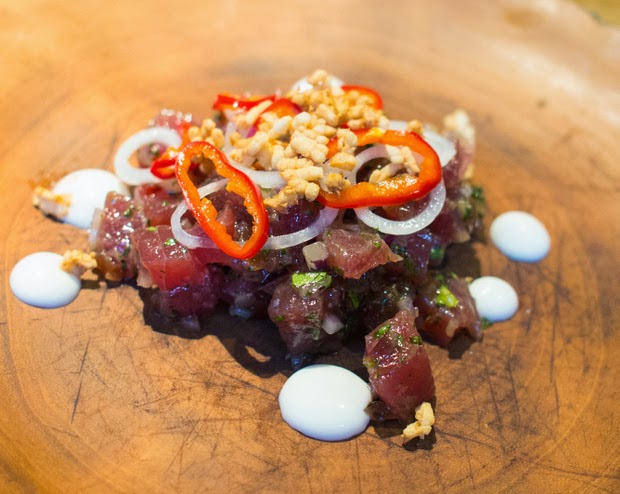 Unfortunately we didn’t enjoy this dish nearly as much. While I enjoyed the flavors, I felt they overwhelmed the delicate ahi tuna. 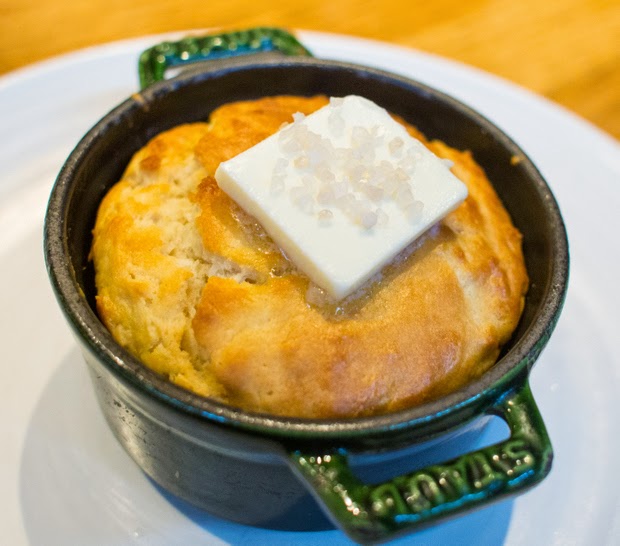 I never thought I’d leave Juniper & Ivy saying one of my favorite items was their biscuit, but that’s exactly what happened after my first visit. Definitely the best biscuit I’ve had at a restaurant in San Diego. It’s buttery, flaky, moist and stays piping hot in the small cast iron skillet it sits in. 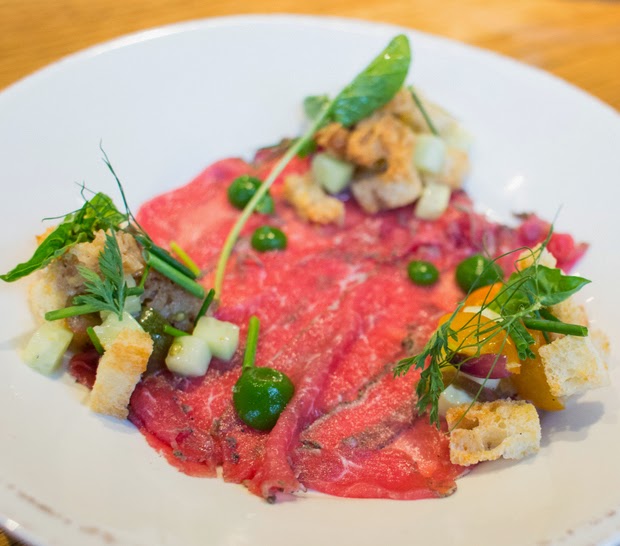 This dish had a lot of bold flavors, with a Mediterranean flare. I enjoyed the heat and the tang of the yogurt. 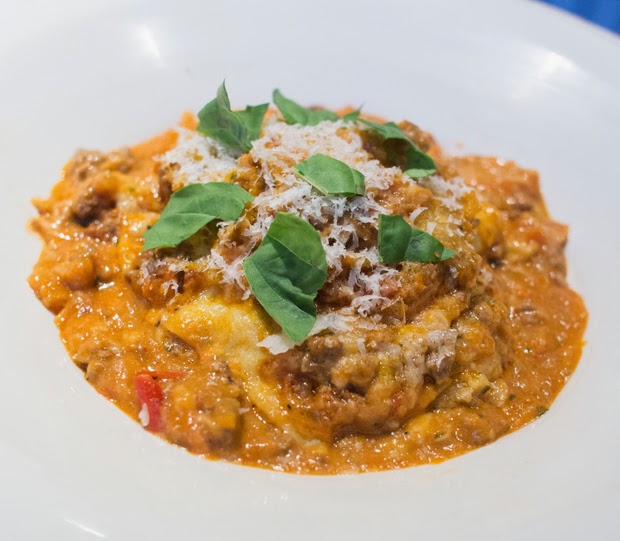 The pasta was filled with chunks of ground lamb. We enjoyed this dish but it failed to amaze as much as some of the others.

IN-N-HAUTE BURGER (“off the menu” item) 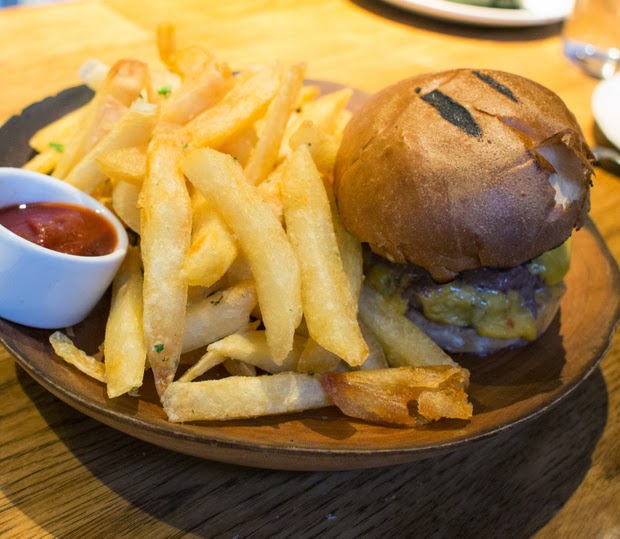 If you’ve watched Top Chef Duels, Chef Blais goes into much detail about what he believes is the ultimate burger. His passion actually made me appreciate this creation even more. This is an “off the menu” item that is available every night in limited quantities. What was most impressive for me though, was actually the monstrous pile of golden fries that accompanied the burger, easily enough to feed four. 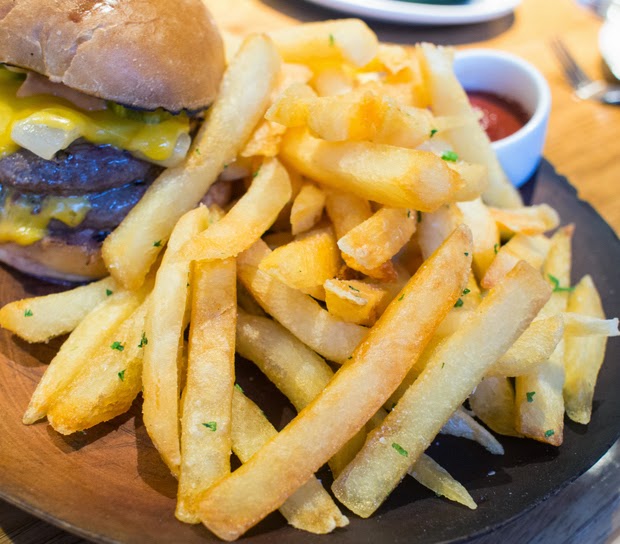 It’s hard to tell in this lighting, but these were the most perfectly golden fries I’ve ever seen. One glance and you can just tell how wonderfully light and crisp they would be. Normally I dislike thick-cut fries, but these are the exception. These are the best fries I’ve eaten. Each fry was light and airy, with a crunchy skin that wasn’t too thick, starchy or over-seasoned. They are accompanied by a house-made kimchi ketchup.

I tried to capture our leftover fries with some better lighting the next morning, but it still doesn’t really give the full effect of seeing these in person. 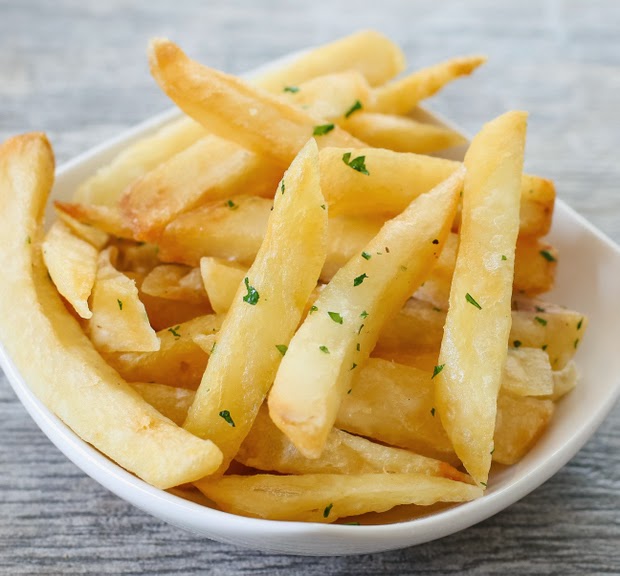 I actually raved about the fries to Chef Blais later that evening and he shared his recipe (which can also be found on various websites in a shorter form). It’s a complicated process but one I will definitely be attempting in the new future because the fries are that good. Basically it involves soaking the potatoes to wash off the excess starch, boiling them, frying them at low temperature, then freezing them and then frying again. 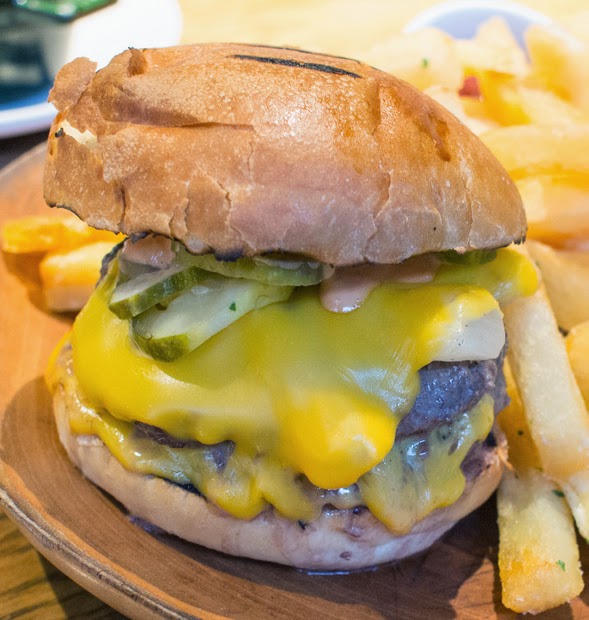 The burger was delicious as well. It’s basically how I had imagined. It basically tastes like an In-N-Out burger that has been given a gourmet makeover. The burger patty is incredibly juicy and the burger stuffed with pickles, dressing and all the other signature In-N-Out flavors. 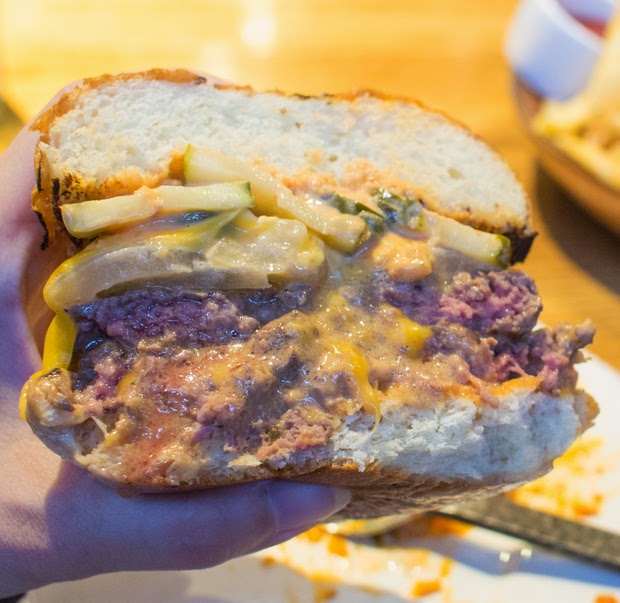 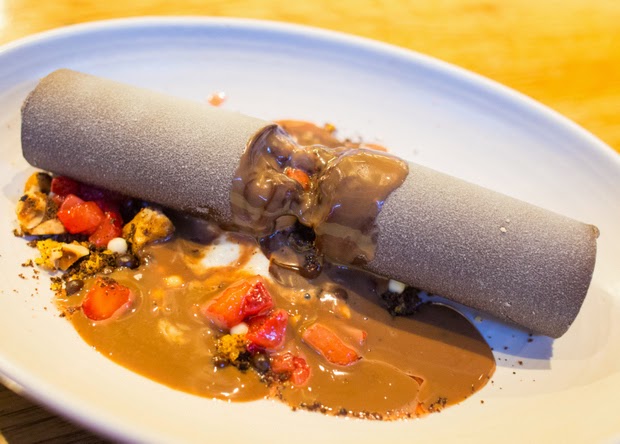 This is the most popular dessert at Juniper & Ivy and despite being beyond stuffed, we just had to satisfy our curiosity and I’m so glad we did. The a hollow cylindrical shaped chocolate is melted with hot liquid chocolate and filled with devil’s food cake and different surprises on each half. One half contains crunchy white chocolate crisps. The other side has strawberry and hazelnut brittle, making this dish both fun and delicious. 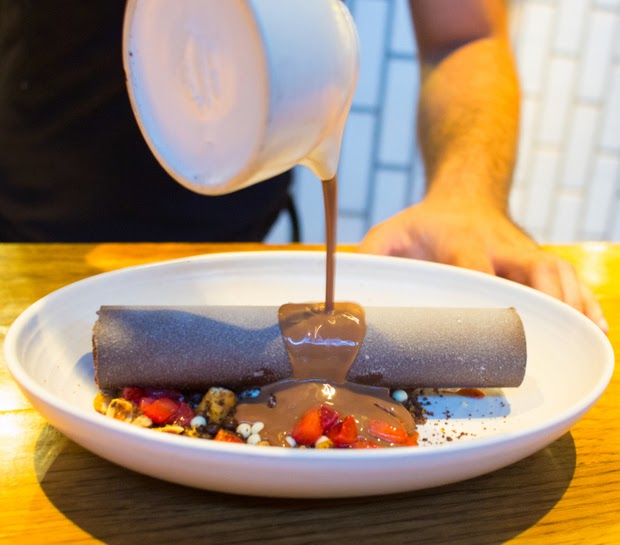 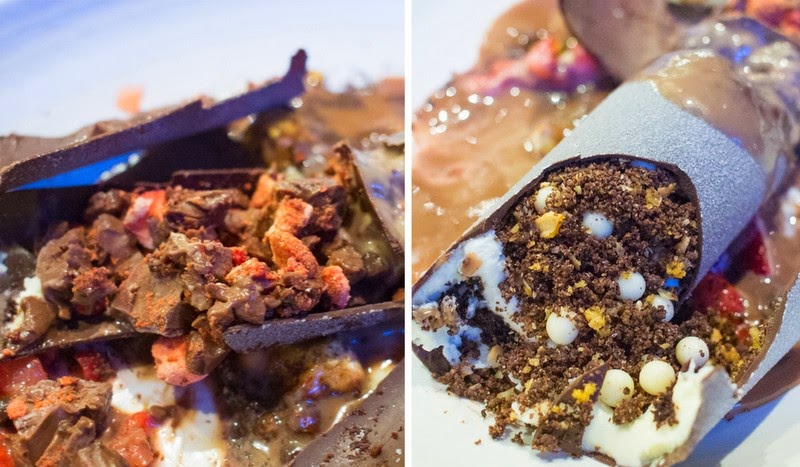 I am usually not very impressed with desserts at restaurants, but this one is one I’ll definitely be ordering again.

After our meal, we were able to meet and take a picture with Chef Blais. Despite how busy he is, he does try to be in the kitchen almost everyday. We had a fantastic meal here and can’t wait to return. As I mentioned above, I highly recommend trying to get seats at the Chef’s Counter for the best views and to focus ordering from the top half of the menu (raw, toast, snacks).

You can read my first visit here.