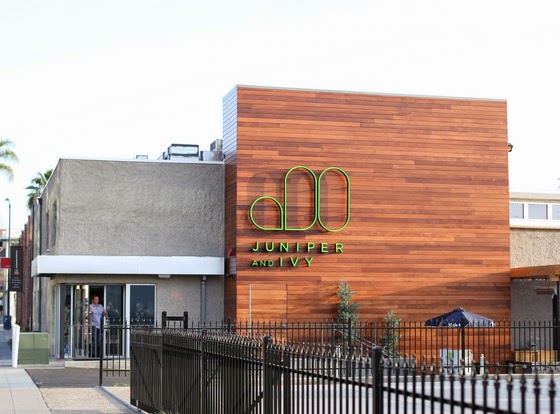 It’s not often that one of the hottest chefs in America decides to open a restaurant in San Diego, so when Chef Richard Blais (winner of Top Chef All-Stars) announced he was coming to San Diego, the news of his decision made Juniper & Ivy the most anticipated restaurant long before it opened.

I somehow managed to restrain my excitement and wait a few weeks for the restaurant to settle in before visiting. I’ve kept up with coverage of the restaurant and yet the pictures don’t fully capture the gorgeously designed space. 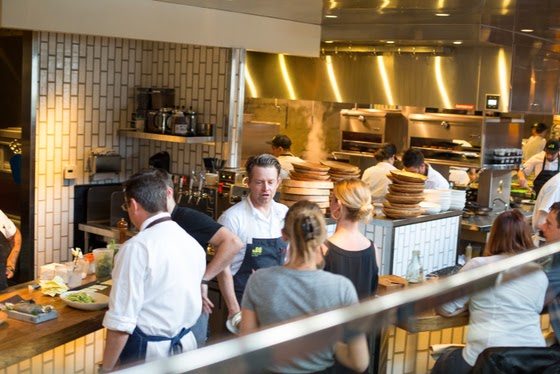 Up front and center is the huge open kitchen. Sure we’ve seen open kitchens in San Diego, but not quite like this. It had an almost stadium-like presence, making us feel like we were getting dinner and a show.

And right in front of the kitchen are a handful of Chef’s counter seats. I wish I had knew about them in advance because I would most definitely had requested them. They reminded me of the Chef’s counter seats I sat at for my Republique dinner, but even better because it isn’t in front of a fire pit, the kitchen station is much bigger, and in addition to watching the action, you actually get to talk to Richard Blais and he even serves the lucky diners some of their dishes. 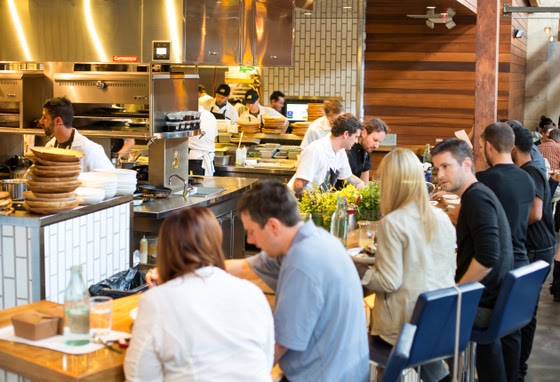 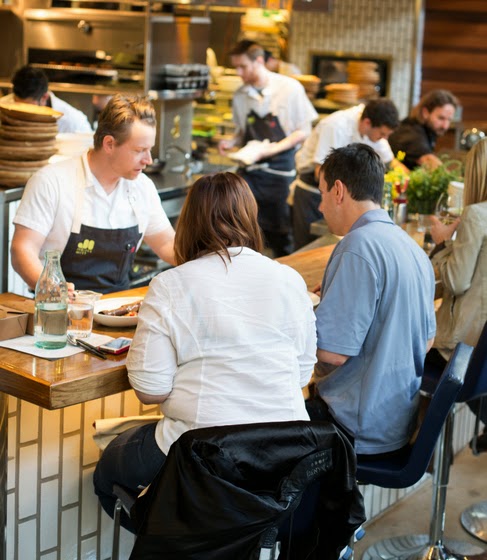 If you have a large group, they have a set of tables right behind the counter, Chef’s tables, which allows groups to enjoy the kitchen action too.

We still got pretty good seats though. We were seated on the next level which gave us a great view of the kitchen and restaurant. I spent most of the evening thoroughly distracted by watching Chef Blais and his team in action.

The menu is broken up into many categories, with smaller dishes situated near the top and large entree-portion dishes at the bottom. We had really been hoping to try the 4 x 4 tasting menu which was originally set to debut by the time of our visit, but when we spoke to our server she indicated that it was still a few weeks away. After much contemplating, we decided to try a dish from every section. 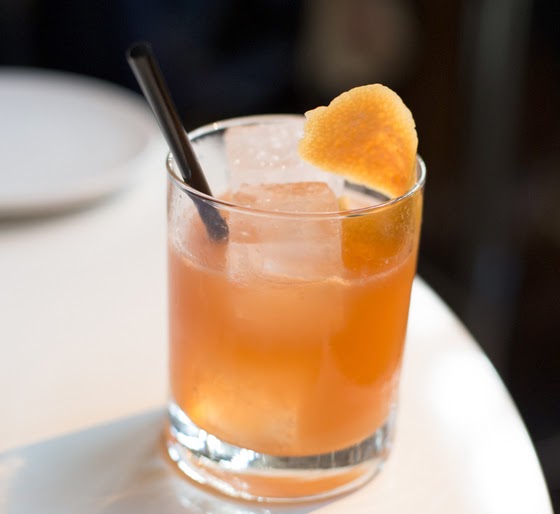 I had seen posts about a Cloud 9 cocktail that features an Absinthe cotton candy cloud. Unfortunately it wasn’t available the night we went. We were told the very popular drink had burned out their cotton candy machine. 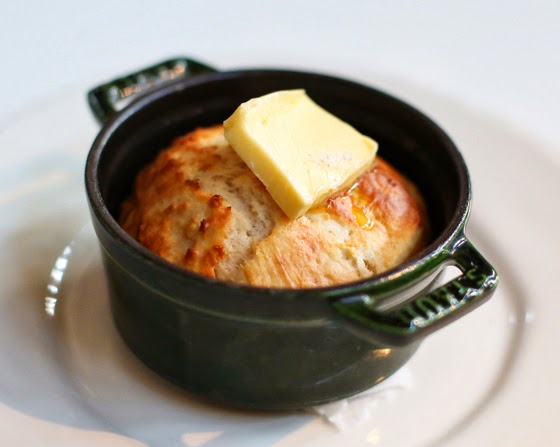 With so many exotic items on the menu, the buttermilk biscuit seemed quite ordinary and normally I would have passed on it. But many positive reviews led me to ordering it. And it was worth it. Hot, flaky, buttery, fluffy– this was one of the best biscuits I’ve ever had. The entire “snack” section had my curiosity piqued with offerings like stuffed abalone, knuckle lobster sandwich and dungeness crab beignet. I need to come back and try them all. 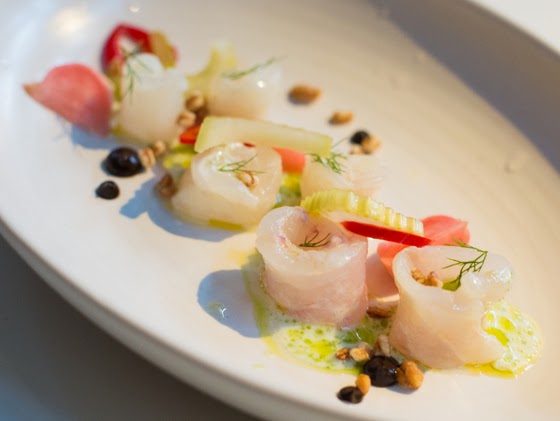 From the raw menu, we chose the fluke which was beautifully crafted. I wish the lighting had been better to fully capture this. The slices of fresh fluke were heightened in flavor with the citrusy and tangy buttermilk dressing, which a touch of heat. We both really enjoyed this one. 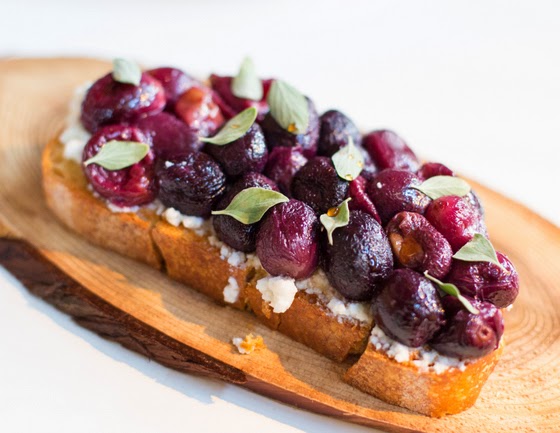 This was one of the most unique items we sampled that night. The cooking technique really brings the juices of the grapes to the center. The sugary sweetness made them jam-like, working perfectly on top of the ricotta spread toast. I also really admired the wooden slab serving plate.

While chowing down on this, Mr. K spotted another item from the “Toast” section, a carne asada crudo featuring four fried quail eggs. Another item I must order next time. 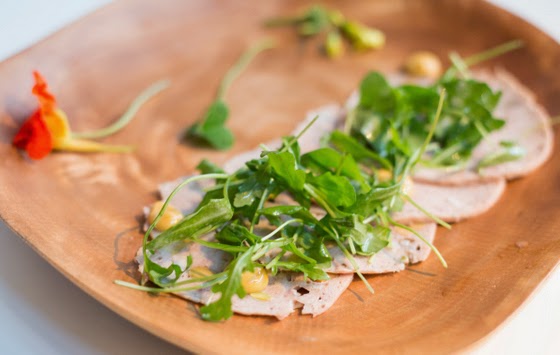 This one was one of the weaker dishes we had that night. I had a hard time tasting the abalone and the dish tasted more of meat than anything else. 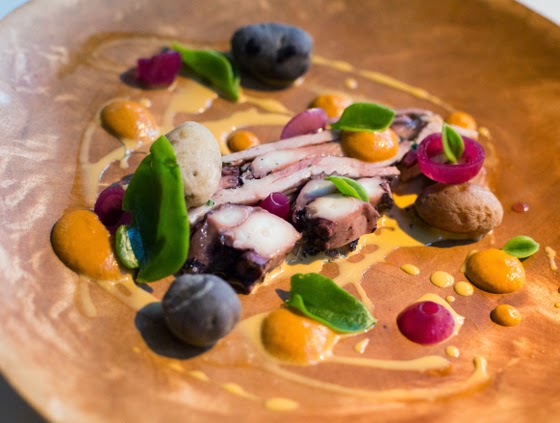 Thin slices of cured pork belly were interlaced with tender pieces of octopus. I loved the presentation but found the pork belly too salty and overwhelming the delicate octopus. The baby potatoes were some of the tiniest I’ve ever seen.

All the dishes came out evenly paced. Once we finished with the smaller plates, we were given fresh plates to start the next section of our meal. 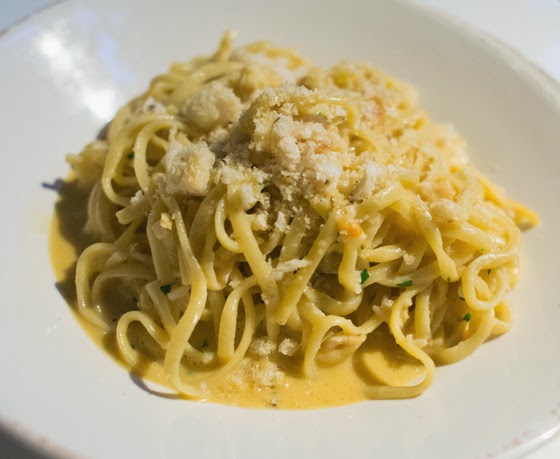 Mr. K was giggling when the server announced our “ling-uni” pasta which features an uni butter sauce. The pasta was cooked al dente, swimming in a rich, buttery uni sauce. The briny clams helped bring out the milder uni flavor. 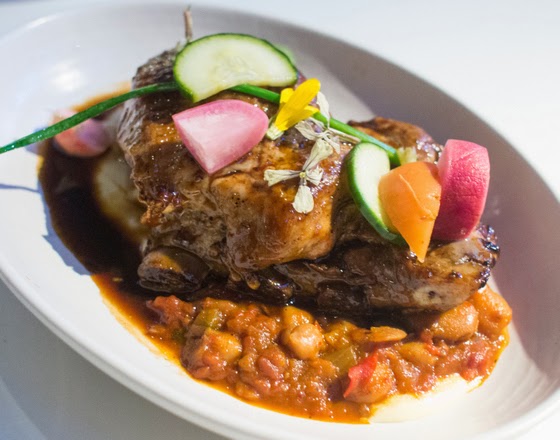 The pork was quite tender, falling off the bone easily. It’s glazed with a sweet and sticky smoked molasses. The meat was paired with a corn puree which was a tad too sweet for my liking, but balanced out with a tangy tomato mix, giant beans, and pickled turnips and cucumbers. My favorite part of this dish was actually the vegetables. The pickled turnips had a fantastic crunch.

We passed on dessert as we were too stuffed. After our meal, we asked if we could get a picture with the chef, and he promptly came right over. He chatted with us a little while before taking a picture and shaking our hands. It was definitely a perfect way to end the evening.

Overall, we had a good time here. It’s definitely one of the more exciting meals I’ve had in San Diego in a while. I felt the smaller sharing plates from the “Snacks,” “Toast,” and “Raw” sections of the menu were more memorable and better showcased his creativity. We definitely want to return to try out other dishes and hopefully the 4 x4 tasting menu. And next time, I’m requesting those Chef’s counter seats. Simply ask for them when you make your reservation, there currently is no additional charge to sit there.

For parking, since the restaurant is situated near the outskirts of Little Italy, it shouldn’t be too hard to find street parking. Otherwise there is valet parking for only $5 as well.

Be warned, the male and female bathrooms share a communal sink, which you’ll see when you first enter the bathroom doors. For some reason this seemed to disturb the men more.