I was determined to spend some time at the beach this weekend and just sit around and enjoy the warm sand and calming sound of the ocean.  Isn't it funny how when something is so accessible to you, you tend to overlook its presence?  I live less than ten minutes from the beautiful beaches of San Diego and yet I rarely ever go, unless people from out of town are coming to visit.

Since we were going to the beach, I thought it'd be perfect to pick up some Vietnamese sandwiches to eat at the beach.  So we first stopped off at K Sandwiches.  You can view my previous post on K Sandwiches here.

Boyfriend and I both ordered the K Sandwich special, which has a variety of cold cuts inside.  I'm not sure of the names of the meats used, but I know I like them. 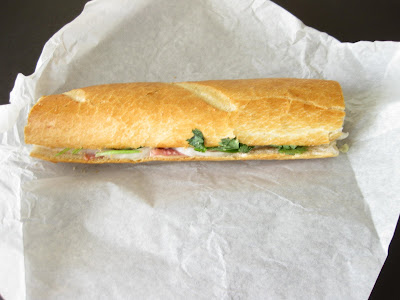 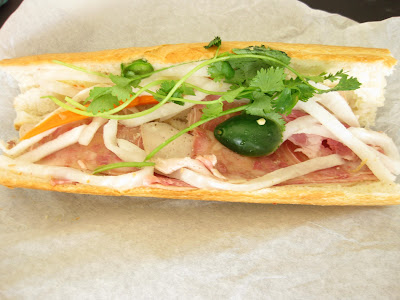 The bread was very fresh and soft, and there was a good amount of meats, cilantro and pickled carrots.  With the outside paper wrapper, it's perfect beach food since you don't need to touch the sandwich to eat it.

K Sandwiches also carries a variety of desserts.  Every time I'm there, I'm always looking at the dessert section.  I have to confess, I'm not very familiar vietnamese food and I haven't really tried many of the desserts.  But I love how colorful and pretty they look.  I'm one of those people who like to eat things more because it's a pretty color.  I decided on this trip that I would pick up some of the desserts and try them out.

First, I picked up these vietnamese rice cakes.  I've been tempted to get these for a while.  I love the light pink and light green colors.  I was a bit afraid to try them though because they look similar to a Filipino rice cake dessert which I am not a fan of.  Since this package wasn't labeled, I went on the internet to do some research and believe that this dessert is called Bánh bò. 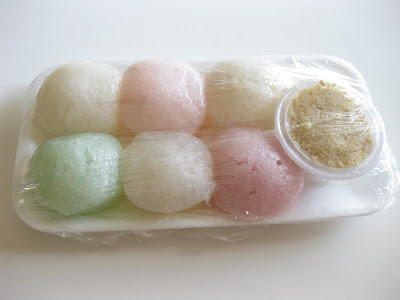 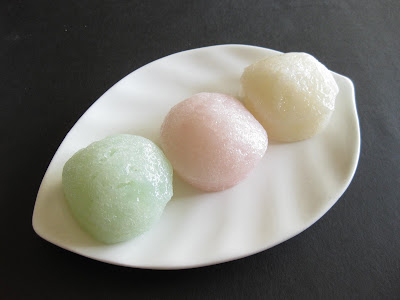 One bit into the cake and I was pleasantly surprised.  They tasted exactly like one of my favorite chinese desserts, bai tang gao, which literally means white sugar cake.  A taro version of the chinese dessert can be found here.  Normally they are referred to as steamed rice cake or steamed sponge cake.  The Vietnamese version is much cuter with it's little mini shapes and colors.  The package also included some ground salty crushed peanuts which I did not care for and a coconut sauce which was pretty tasty.

I also picked up these gelatin-like colored desserts with coconut flakes and a paste filling. 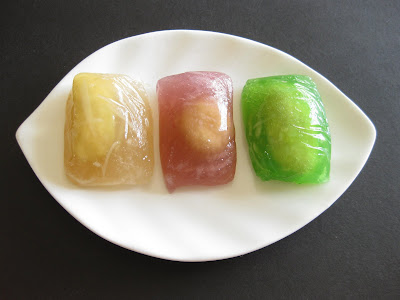 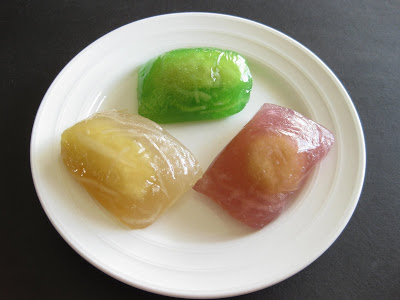 Despite how interesting this dessert looked, I was not impressed with the taste.  It was very bland.  The gelatin did not have much of a flavor and I didn't really care for the filling either, which was a salty-sweet paste.   After some research, I learned this dessert is called banh xu xe.  While trying to find the dessert name, I actually found a post about it by the gastronomer on her gastronomy blog here.  Apparently she didn't care much for the dessert either, so now I don't feel so bad.

I also picked up a colorful green dessert served in a cup.  I forgot to take a picture of it before consuming it.  I enjoyed it.  There was a green colored coconut liquid, mixed with jelly, canned fruit, and ricotta cheese.  Nest time I'll have to explore the other desserts offered at K Sandwiches.

3 comments on “K Sandwiches revisit and exploration of Vietnamese desserts”