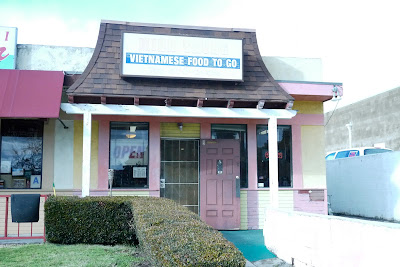 This past Saturday was particularly cold for San Diego standards. I was completely bundled up but when the wind blew, I felt like I wasn’t wearing anything. Hot noodle soup sounded perfect for the chilly conditions.

Mien Trung is a small Vietnamese restaurant, located next to Sushi diner and around the corner from K Sandwiches. The small space and worn sign makes it hard to spot.

Unlike the usual Vietnamese places that I have visited in the past, Mien Trung does not serve pho, but instead serves various Bún (rice vermicelli) dishes. I’ve been wanting to expand my experience with Vietnamese cuisine for a while and after some good posts on Mien Trung from mmm-yoso and A Radiused Corner, along with a recommendation from my friend Steve, I knew this would be a good place to check out.

I originally was there to try the Bun Bo Hue, which is a beef noodle soup. However, once I arrived and perused the menu, there were so many other broths and ingredients available. We decided to all get something different. 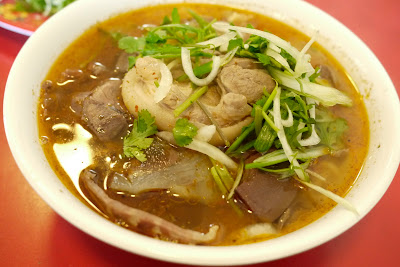 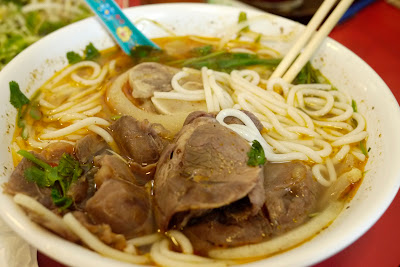 There was a lot of chili oil in the broth though you can’t really tell from the picture, and it made things a little too spicy for him. I thought it was on the spicy side as well, but I really enjoyed the lemongrass flavor and the richness of the broth.

I ordered the Bun Mang Vit, which is rice vermicelli soup with duck and bamboo shoots. The broth did not taste the same as the bun bo hue, but it was enjoyable. I liked that it arrived piping hot. I was pleasantly surprised that there were quite a few pieces of duck, though the ducks seemed to have been cooked too long because it didn’t have much flavor. The bamboo was a little tough and dry. 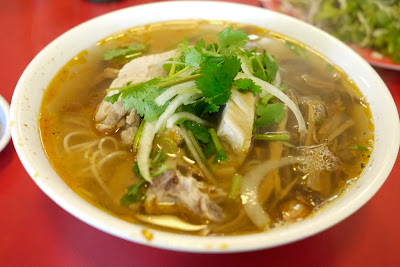 Baby Bro ordered a Bun Rieu, which has a crab flavored broth. I could definitely taste the crab flavor in the broth and I think I will try this next time. 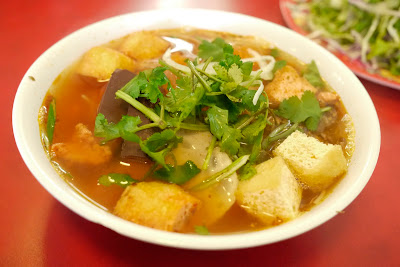 A large plate of shredded cabbage was given to us to be added to the noodle soups. 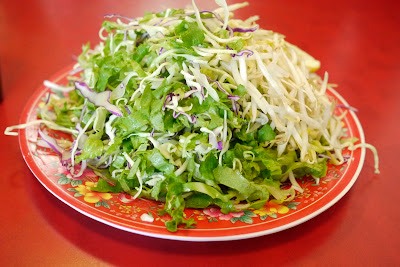 Baby Bro’s GF ordered a dry bun dish with eggrolls and bbq pork. Her bowl consisted of some raw vegetables, topped with cooked vermicelli noodles and bbq pork and eggrolls cut up. I’m not a big fan of the dry bun dishes. I always think it’s weird that there isn’t any flavor in the noodles. I guess you are supposed to treat eating the plain noodles like eating rice. 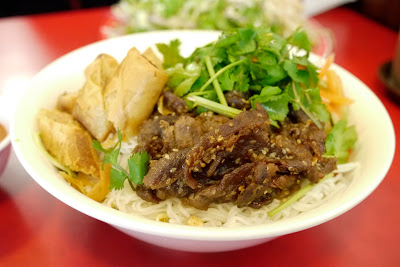 We also got an order of eggrolls because I always want to try the eggrolls. 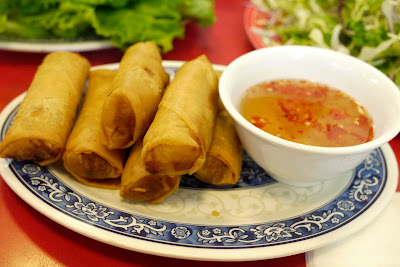 The skin of these eggrolls was very thick and slightly sweet. I don’t particularly like this type of egg roll skin.

We also got the steamed rice cake with shrimp and meatball. 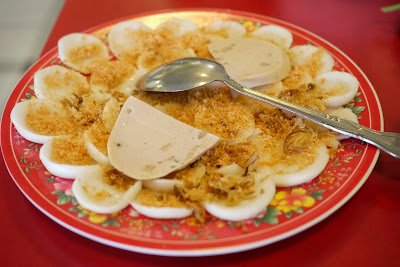 The little rice cake pancakes are topped with shredded dried shrimp. There were also a few slices of the vietnamese meat loaf. The rice cakes by themselves did not have any flavor, but when dipped in the fish sauce, they were pretty tasty.

Overall, I really enjoyed my experience here. The hot soup was perfect on such a chilly day. The prices were quite reasonable. We will be back to try more dishes. The place is pretty tiny though so it’s not great for a large crowd.