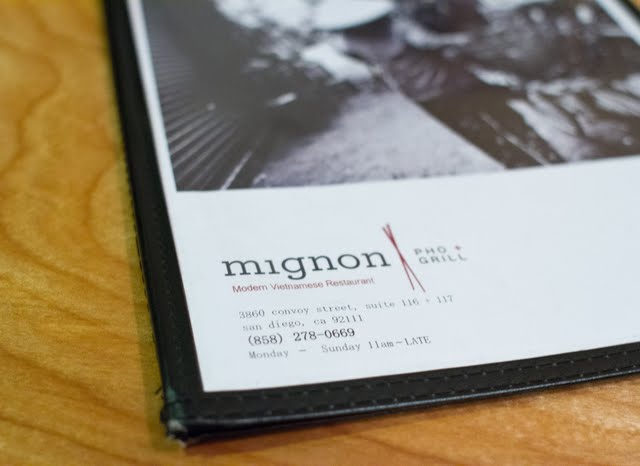 It’s been a really long time since we paid a visit to Mignon Pho + Grill. I had heard of some new menu items, so we decided to go check it out again with some friends.

On the table, they advertised that they now offer Happy Buddha beer. I liked the bottle. 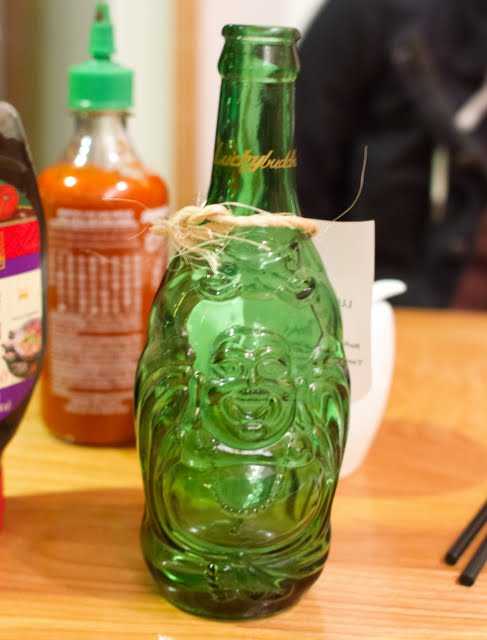 I was most curious about the new appetizer menu. They offered many appetizers I used to enjoy at Nam An before it went downhill. 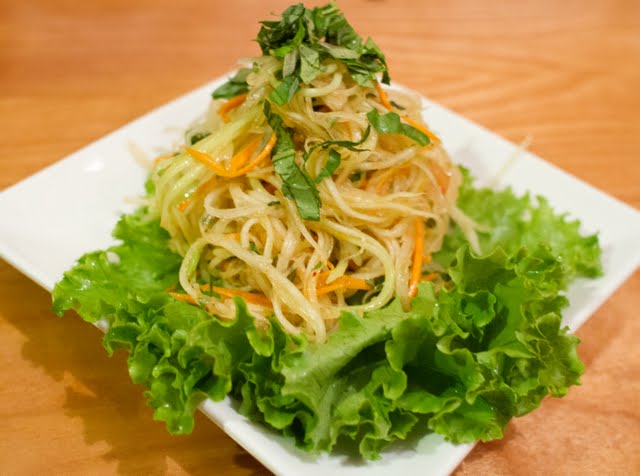 Unripe papaya is mixed with chili oil, lime, fish sauce, and some other things. This salad had a good balance of sweet, acidity and heat. My one complaint was that the strands of papaya were very long, almost like noodles, making it a little difficult to eat. 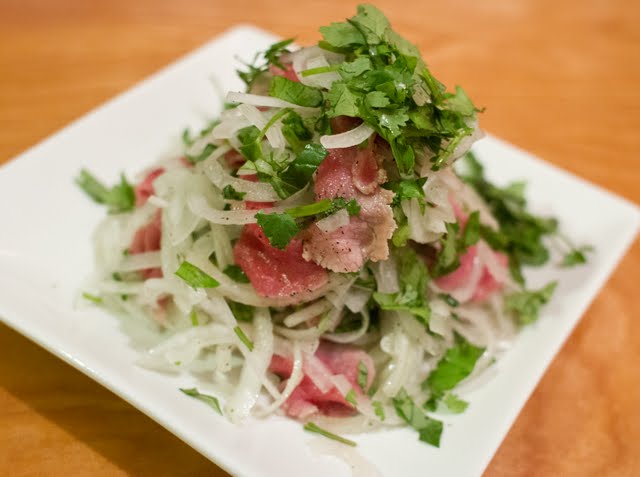 This is a raw beef salad, with the fresh lime juice slightly cooking the thin slices of rare beef. While I was happy to see that the beef was still quite rare (sometimes it ends up getting completely cooked), this dish had too many onions and not enough spices. The beef tasted mainly of the raw onions. 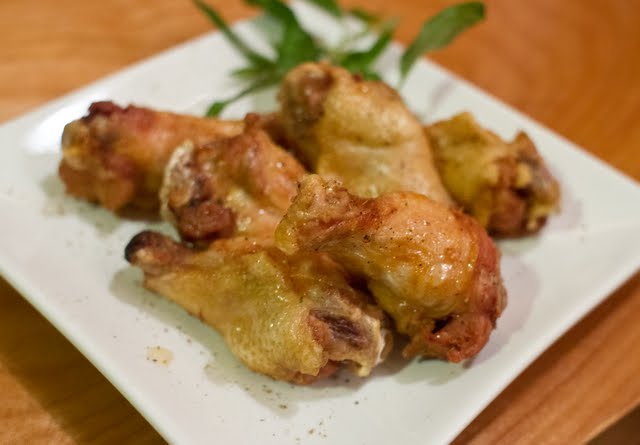 The skin of the wings were quite crispy and had a sweet glaze. I wished the wings weren’t just sweet. I recall when I previously ate these, they have some other herbs and spices like lemongrass in the seasoning. 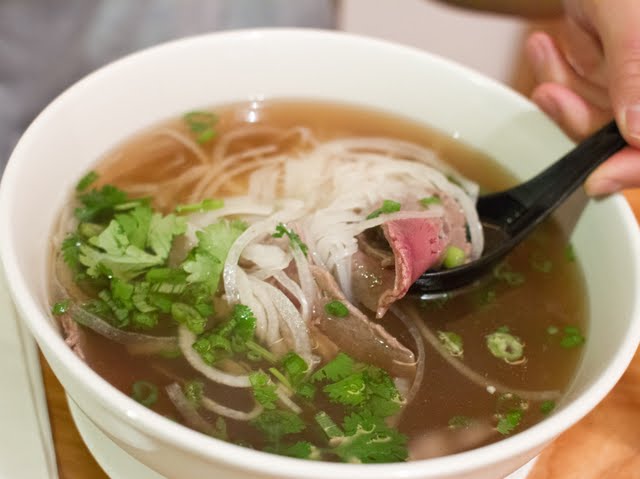 One of my friends ordered the filet mignon pho. The filet mignon meat is very tender and melts in your mouth. After eating it, it’s hard to go back to the regular rare steak that usually is served with pho which is dry and tough in comparison. I didn’t try any of the broth but it looked awfully dark. 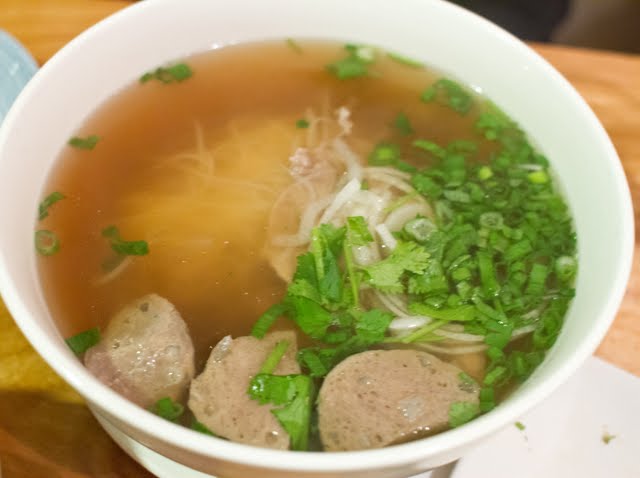 My other friend order the pho with beef meat balls. 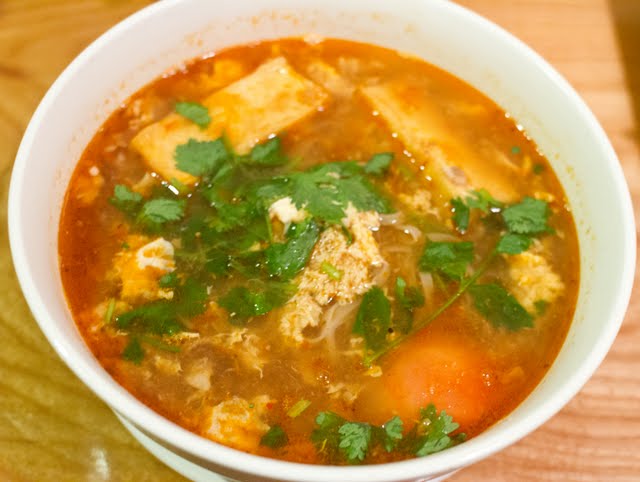 One of the new noodle items is Bun Rieu. I haven’t really liked the versions of Bun Rieu I’ve had in San Diego so I decided to try Mignon’s version. 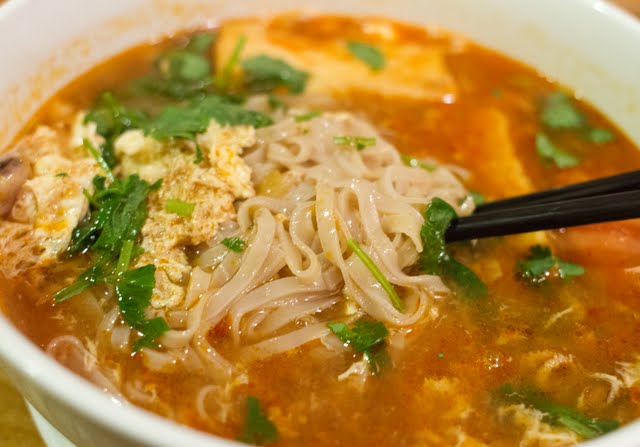 Bun Rieu is usually made with crab meat, other seafood, and tomatoes. The tomato flavor was quite a bit lighter than other versions I’ve had which I actually didn’t mind because the other versions I’ve had, I’ve found that the tomato overwhelms the crab. However, the crab flavor was pretty non-existent. They gave a choice of seafood options to add to the Bun Rieu. I chose octopus and the soup had a few baby octopi. 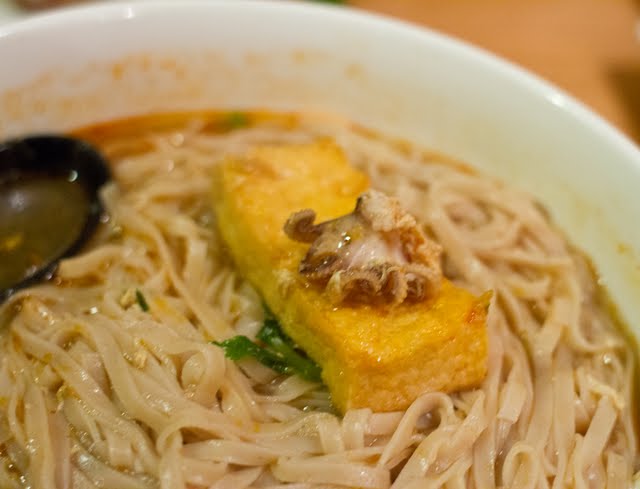 I didn’t think this was a good rendition of Bun Rieu, but if I pretended it wasn’t Bun Rieu, I actually enjoyed it because it reminded me a lot of the egg drop noodle soups I might make at home.

Mignon also offers an option to substitute to brown noodles and I decided to try it. They were wider, slippery, and I enjoyed them more than the regular noodles. 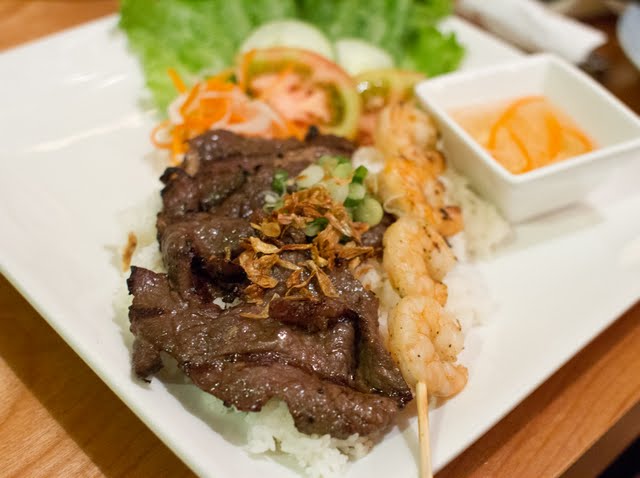 The non-pho dishes had funny names like this one. This was DH’s choice. I thought the seasoning and marinade were a little too salty, but otherwise this was alright.

Overall, the food here was just average. I think I remember now why I haven’t visited in so long. I probably won’t be back again for a while. You can read my first post here.