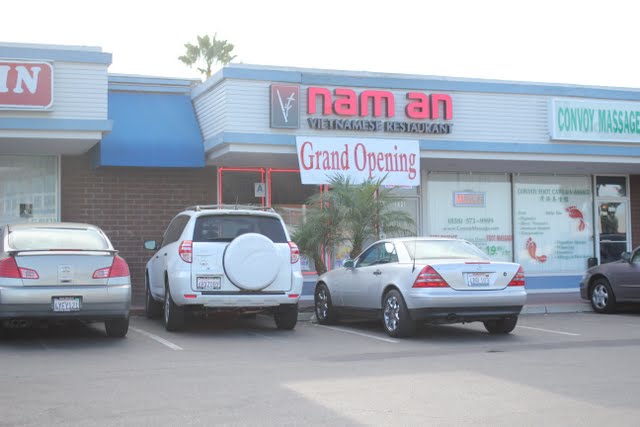 Nam An is a small Vietnamese restaurant that recently opened up in the same plaza on Convoy Street that contains China Max and the original Spicy City.  A positive review from mmm-yoso regarding the bar food options, along with chatter on yelp that the restaurant makes its own rice noodles, had me quite curious about this new restaurant.

The first thing we noticed after entering was that there were no utensils at the table. Unlike most typical pho places that have a stack of spoons and chopsticks sitting in the middle of each table, here fresh and clean utensils are given to each customer after they order. No more having to wipe down sticky feeling spoons and chopsticks. Yay!

Once seated, we were presented with a menu that offered the typical pho, fried rice and noodle dishes. I had been afraid the prices would be marked up, but the pho bowls were all reasonably priced between $5-6 dollars.  One notable option on the menu was an offering of a chicken soup using free range chickens. No one ordered it on this outing, but I do want to try it sometime. 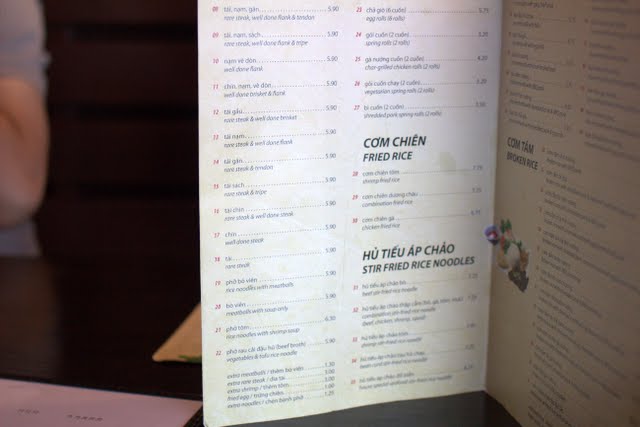 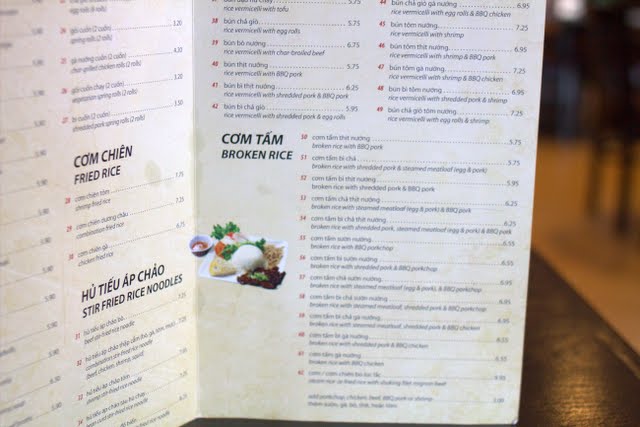 (I just realized that I only uploaded small versions of the menu. I’ll make sure to update this with larger photos to view for those who want to see the full menu.)
In addition to the regular menu, we were also presented with an appetizer menu with dishes that are not usually offered, such as a snail mango salad. 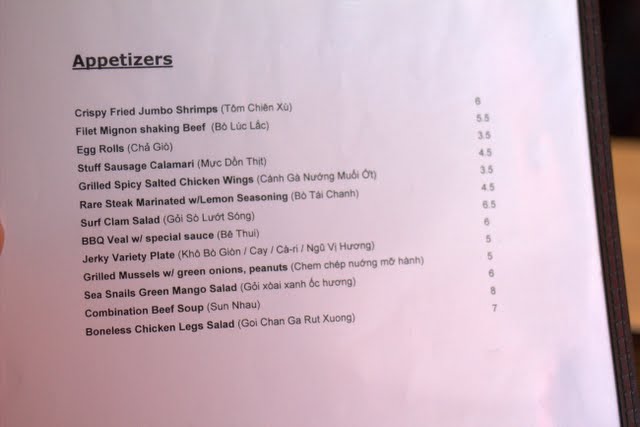 Based on the server’s recommendations, we ordered the mango snail salad and the rare steak marinated in lemon seasoning. 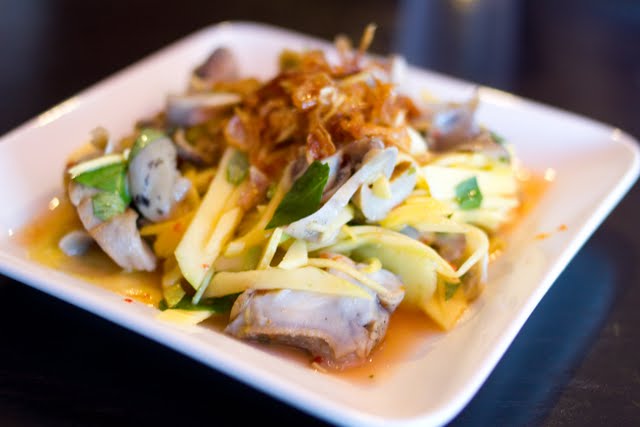 I liked the sweet and sour flavors in the mango snail salad. The pieces of snail were quite chewy, like eating squid. 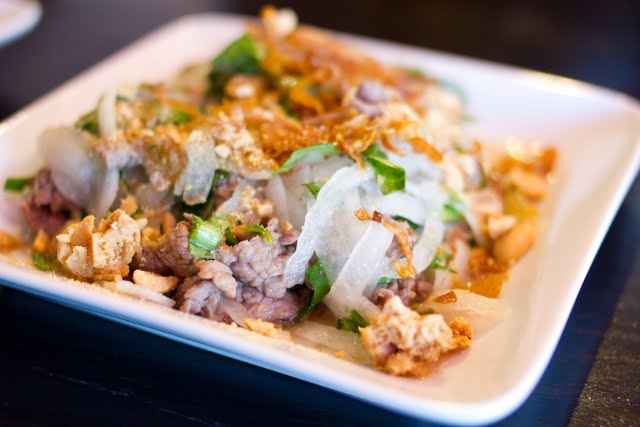 I was surprised when the rare steak came out because the beef was definitely not rare. The meat wasn’t even the tiniest bit pink; it was completely cooked. The meat gets cooked by the acid lemon based sauce (at least that’s my understanding from watching episodes of Chopped), but I didn’t expect it to be cooked so thoroughly. I still really enjoyed the flavors of this dish, but it wasn’t what I was expecting.

For our pho, we were presented with the usual plate of herbs. I was happy to see the saw leafed herb I like so much present on the plate. 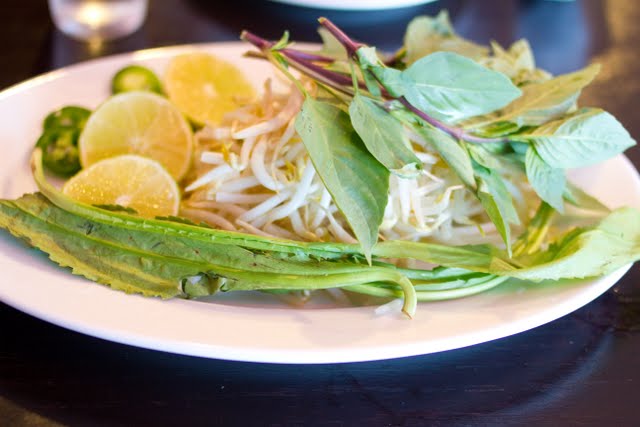 Here is my bowl of pho when it first arrived. And then again after I added the herbs and cooked the meat. 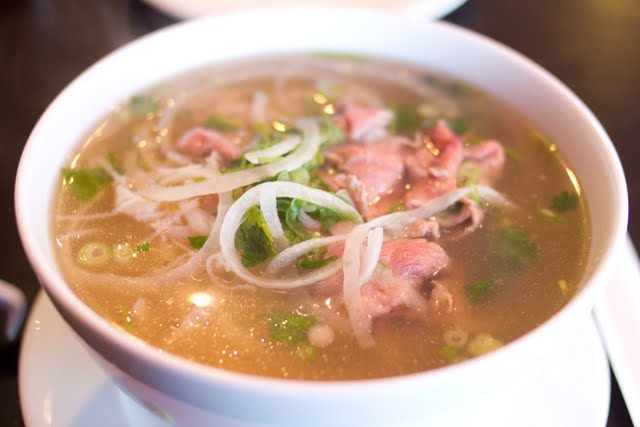 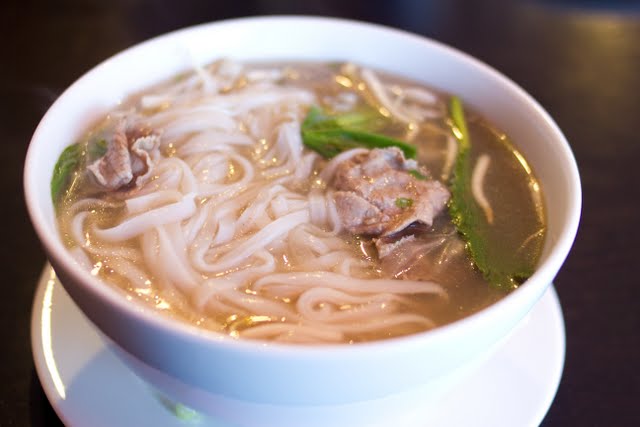 The noodles are definitely different here. They are much wider than the typically thin rice noodles used for pho. I enjoyed these noodles. They were soft, with a slight bounce to them. The restaurant has a machine to make the noodles. But on occasion, the machine does break down and then they have to order the noodles from a place in LA. 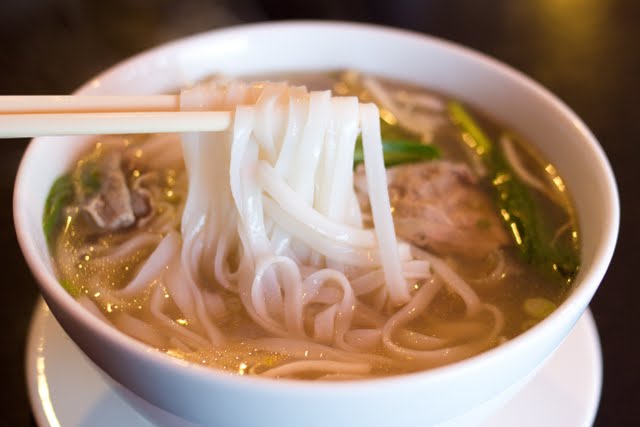 The soup here is notably lighter than other pho beef broths I’ve had. I personally enjoy the lighter taste more, but I’m not quite sure how others may feel.

FH chose to order a stir fried noodle dish. The noodles used were very wide cut. The texture of the noodles was similar to the ones used in the pho, though slightly firmer and bouncier. Normally we don’t like the stir fried noodle dishes at pho places. The dishes tend to be oversauced, the noodles overcooked. But we all really enjoyed FH’s dish. He finished it off quite quickly and wished he could get a refill on the noodles. 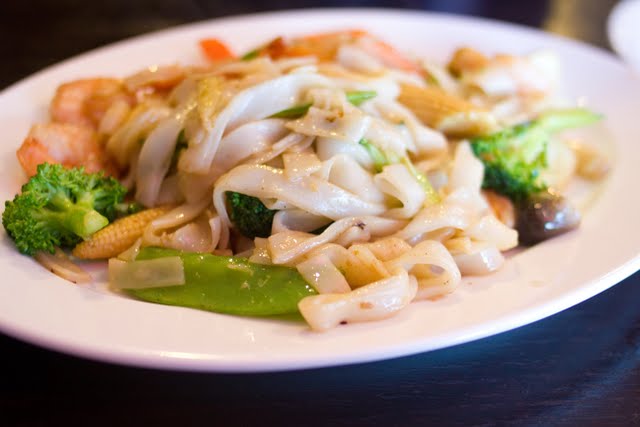 Nam An also serves complementary dessert with your meal, another plus. We were presented with a tapioca pudding-like dessert. I didn’t particularly like all the ingredients mixed in with the tapioca, but it was free, so I’m not complaining. 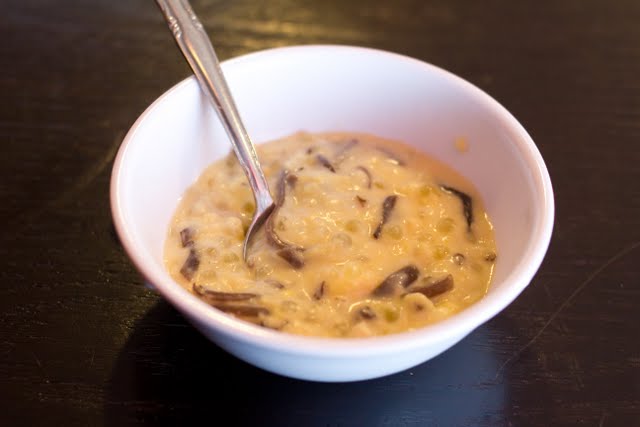 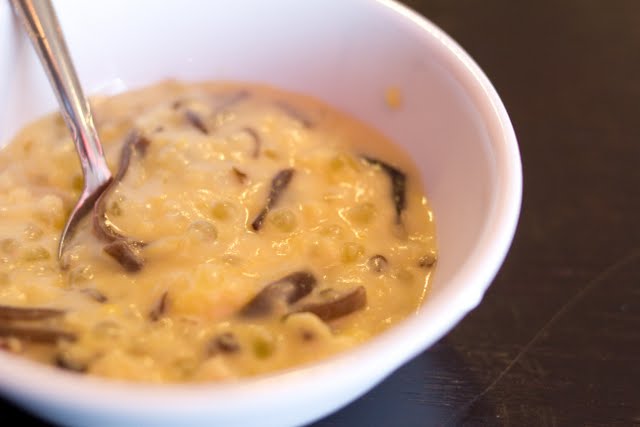 We had a great first experience here and I foresee many visits back. The staff is friendly, the food is tasty. Another added bonus is that it stays open until 3 am on weekends.

Update: I recently wrote a short piece on Nam An for San Diego Magazine, which can be found here.