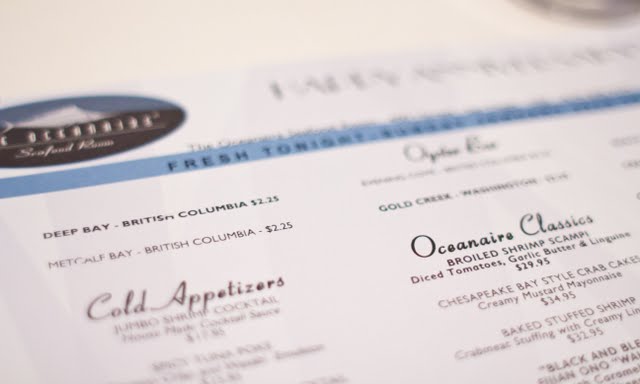 Our San Diego restaurant week participation is never complete without a visit to Oceanaire. We love dining here for restaurant week because their famous crab cakes are always offered as an appetizer choice, and they offer quite a selection of entrees and desserts for RW.

It’s been nearly a year since we last dined here and we noticed some visible changes. One of the biggest changes was the menu section. The fish entrees are now divided into Oceanaire classics and fresh fish specialties. My recommendation is to always stick to the fresh specialties as that is where Oceanaire’s fresh fish  really shines. The classics consist more of fish that is stuffed, fried, etc. Surprisingly, Oceanaire was offering all of its fresh speciality entrees as part of RW. 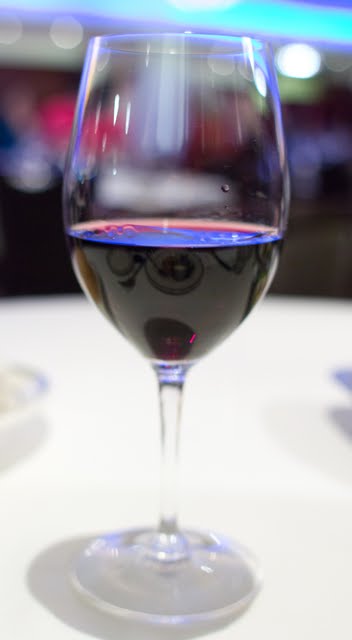 In addition to the food, Oceanaire also offered a wine pairing, $12 for two wines, a chardonnay and a reisling. 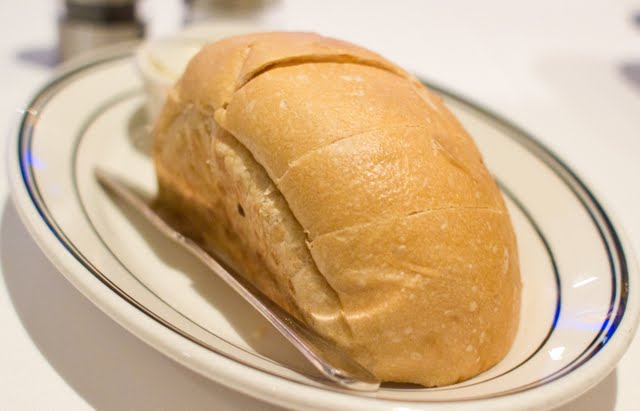 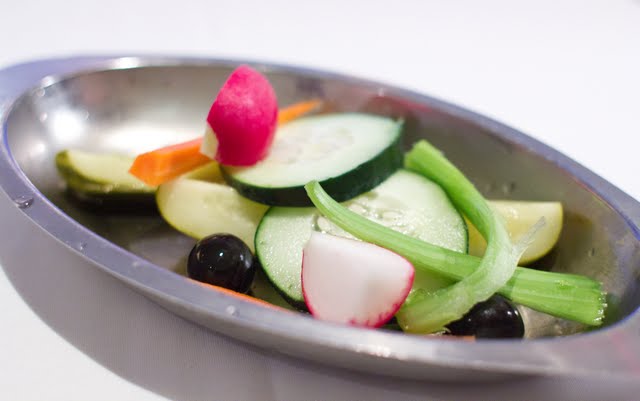 These are always complimentary starters at Oceanaire. We munched our our crisp vegetables while waiting for our crab cakes. 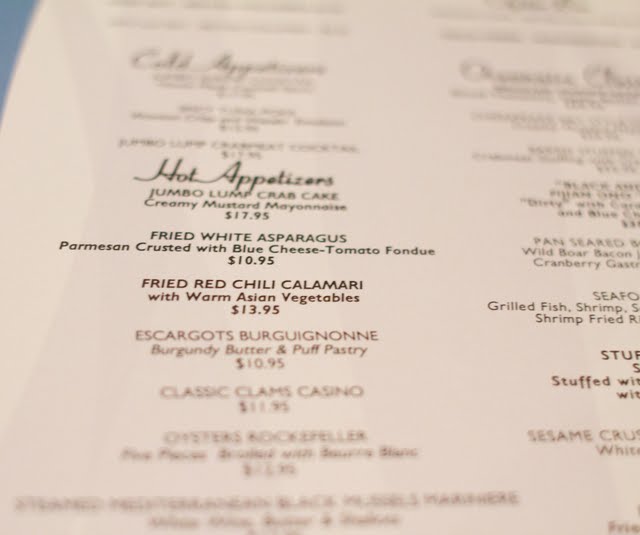 We love the crab cakes here so much, we haven’t been able to stray away to ever try the other appetizers. 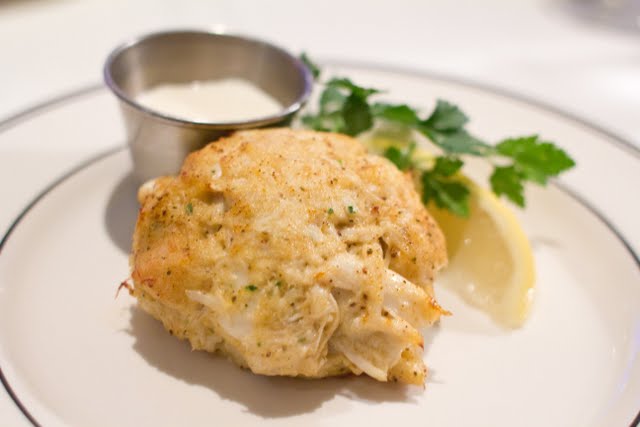 At $17.95 apiece, this is one pricey appetizer, which is why it’s such a great deal during RW. What makes Oceanaire’s crab cakes stand out is that they use large chunks of crab meat, loosely held together with some mustard mayonnaise. You won’t find large fillers of bread crumbs mixed in. Each bite is filled with juicy, sweet crab meat. The creamy dipping sauce is the perfect compliment to the cakes. 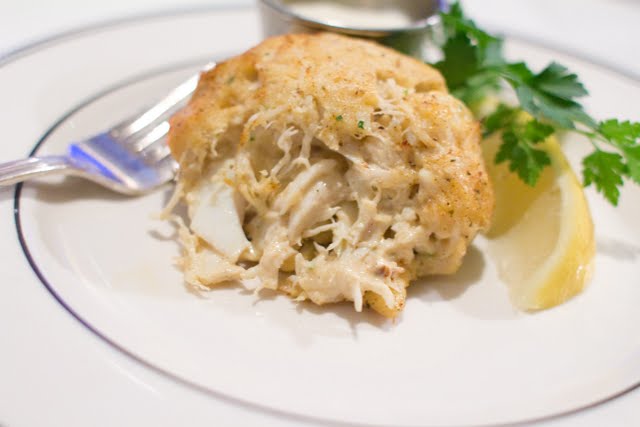 I spied some of my favorite fish preparations on the menu including the Kid Dynamite and Black and Bleu, but I opted to try something new. 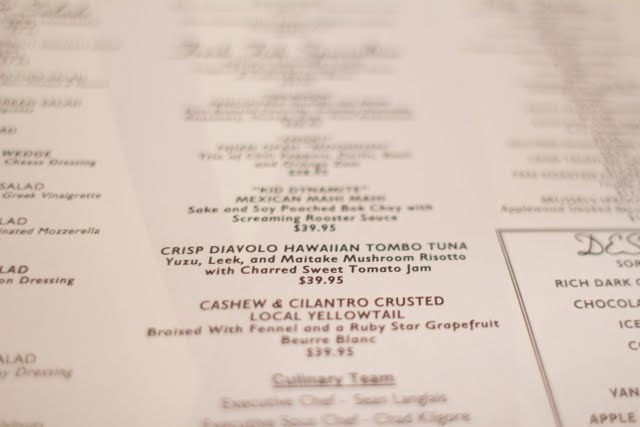 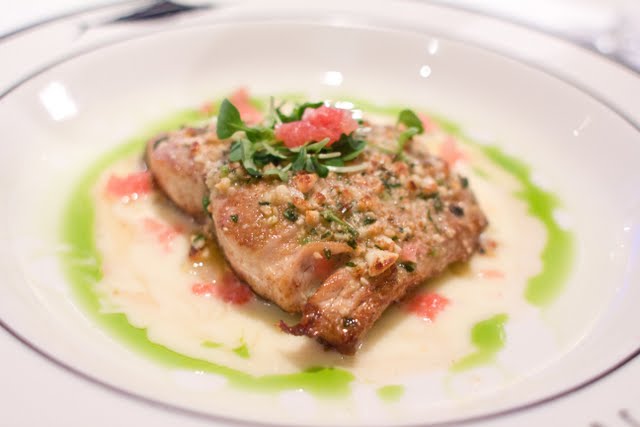 I loved the colors decorating this dish. The fish was cooked to a perfect medium, moist and flaky. The flavors were mild, letting the fish shine. 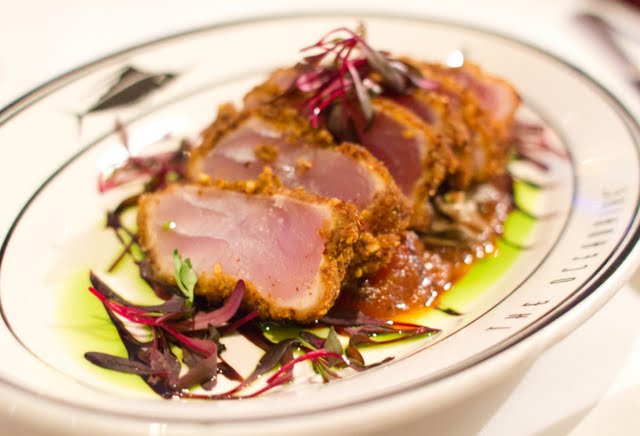 In contrast to my entree, the flavors on this plate were much more bold. We noted that the serving size appeared to be large than previous versions of the seared tuna dish we’ve ordered from here in the past. The tuna was encrusted with a spicy rub. It was crunchy and tasty, and quite spicy. I enjoyed the preparation and it was a change from the usual seared tuna you see on most menus. The fish sat on a bed of risotto and tomato jam.

Sides are not included as part of RW, and while the portions are quite filling, I spied a new side dish that I wanted to try, so we added it to our meal to give us a more balanced meal. 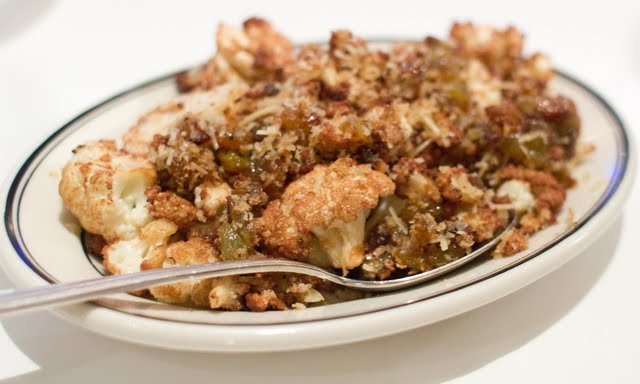 The cauliflower are sauteed with olive oil, flash fried, and drizzled with truffle oil.

We were immediately hit with the aroma of truffle oil when this came out. Presentation-wise, it’s not the prettiest of dishes. The cauliflower was crunchy with bits of breadcrumbs covering the outside. Plump wine soaked raisins added some acidity and sweetness. 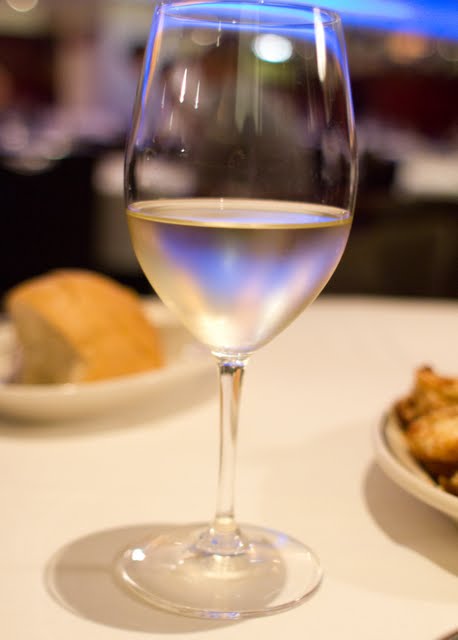 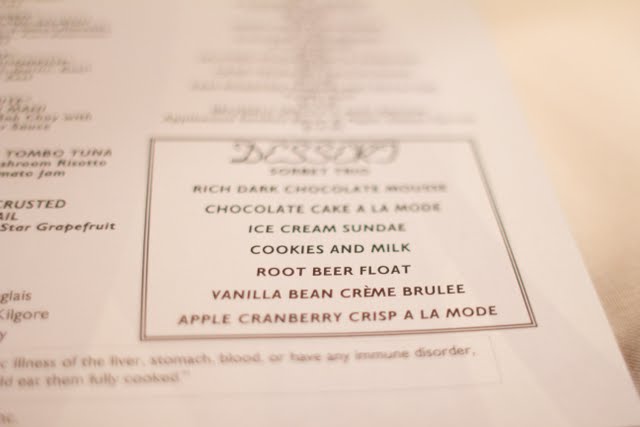 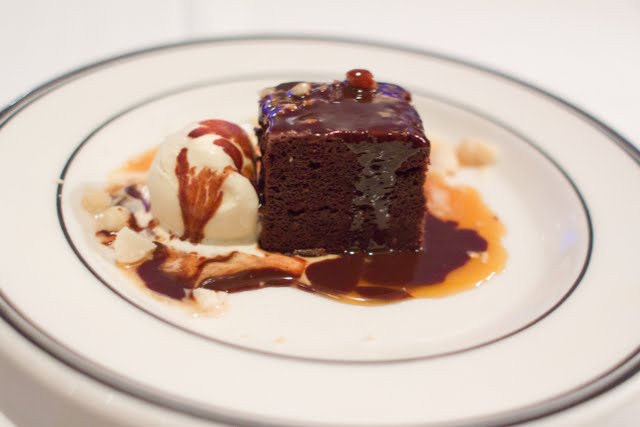 Warm, decadent chocolate cake served with a side of ice cream, topped with a caramel sauce. What more can you ask for? 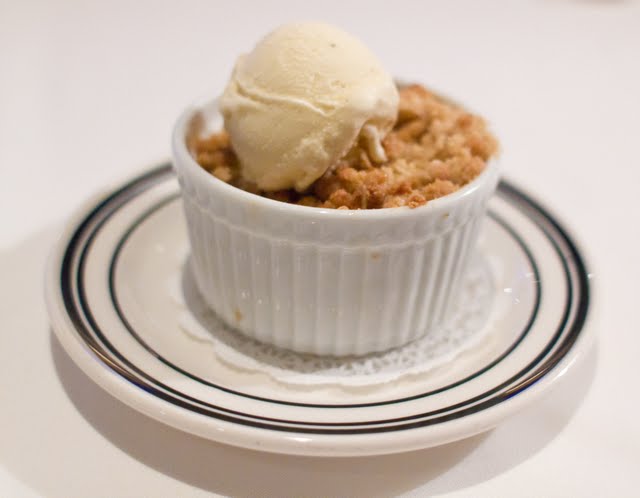 The crisp was served warm with a scoop of vanilla ice cream. The crisp had just the right amount of tartness and crunch and tasted perfect with the ice cream.

For anniversaries and birthdays, Oceanaire will present you with a special menu saying “Happy Anniversary” or “Happy Birthday,” and they give you a free Baked Alaska for dessert. The dessert is huge, delicious and fun because the meringue is drenched in alcohol and then lit on fire. 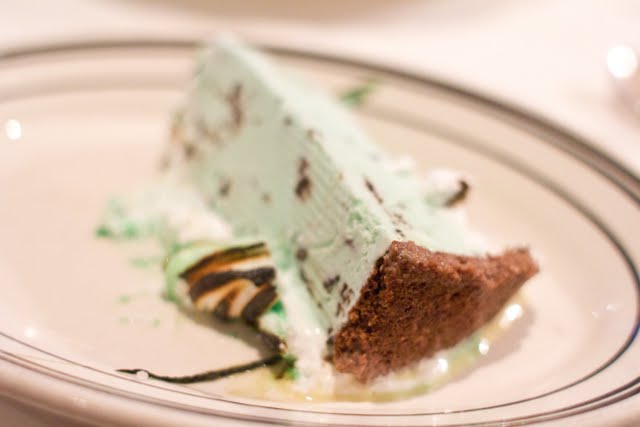 The cake and ice cream flavor changes periodicially. On this occassion, it was mint chocolate chip and even the meringue turned from white to green after it was lit on fire. 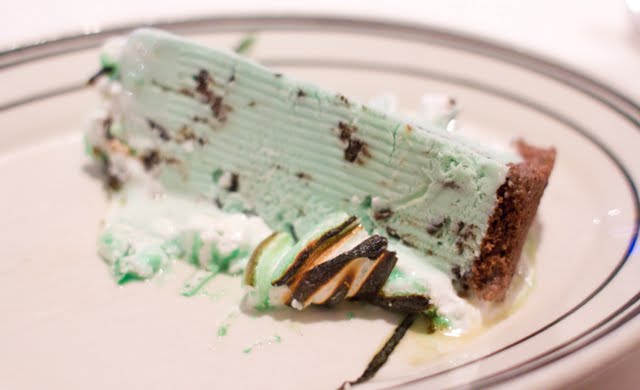