So it's finally happened.  After enjoying countless wonderful meals at Oceanaire in the past, and glorifying about the restaurant to all those who will listen, Boyfriend and I finally had a not-so memorable meal.  Of course it wasn't so bad as to stop us from going back, but it did put a little damper in our mood and made us realize that our perfect restaurant is not so perfect.  The food was as good as usual, but the service was not.  I've stated before in the past that service can really make or break your meal.

Oceanaire is a favorite restaurant for Boyfriend and me.  It's been our go-to restaurant for all sorts of celebrations and special occasions such as birthdays, anniversaries, Christmas, and "just because."  Until this last visit, it's been such a dependable place for us.  The fish has always been fresh, the crab cakes always as mouthwatering as we remembered, and the service has always been some of the best service we've ever received.

Oceanaire is a great place for celebrating anniversaries and birthdays because they print a menu with the words "Happy Anniversary" or "Happy Birthday;" they usually give you a nice cozy booth, and they present you with a baked Alaska at the end, with all the hoopla of lighting it on fire and adding some sparklers for special effects.

When we arrived for our reservation, we were surprised to be seated so quickly.  We've grown accustomed to how busy Oceanaire is during restaurant week and there always seems to be a delay between reservation time and seating time.  However, there was no wait that night.

We were seated at a regular table, which I was slightly disappointed with.  In the past, for our anniversary, we've always been seated at one of the nice booths.  But we figured all the booths must be full and we would rather be seated immediately then have to wait around for a booth to open up.

Shortly after we were seated, we were greeted by our server, whose name I won't mention.  We were given our "Happy Anniversary" menus, which we like to keep a copy of for a souvenir.

We were then given the customary sour dough bread, pickled herring and vegetable platter.  I didn't take any photos of it this time.  I was actually debating whether to photograph at all.  I feel like my little point and shoot camera doesn't do the food justice, but I also didn't want to carry around my dslr camera.

All the menu items in bold are part of restaurant week.  You get to choose one appetizer/salad, one entree, and one dessert.  As you can see, there are quite a few choices, whereas a lot of other restaurant week participants only offer three choices. 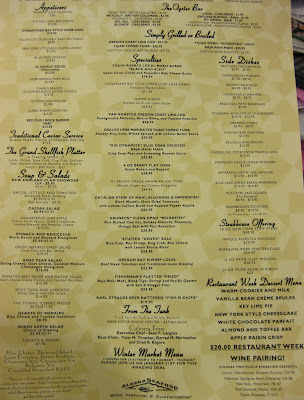 Boyfriend and I both started with the crabcakes.  The crab cakes always taste wonderful.  I've talked and raved about them before, so I won't bore you.  What makes the crab cakes so special to me is the use of large chunks of crab meat and very little use of fillers like bread crumbs, etc.  It's like eating the best portions of a crab without having to get your hands dirty.  The sauce it is served with really enhances the taste of the crab. 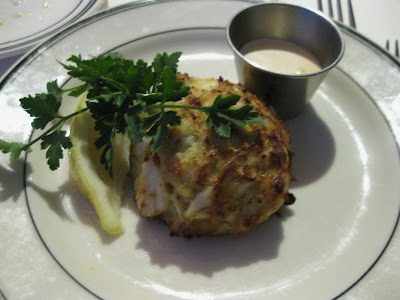 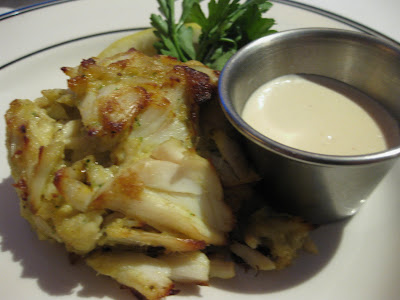 For the main cours, I ordered the tomba tuna.  It was seared a medium rare, and put on a bed of greens and king crab chunks with lobster sauce.  I loved the subtle sweetness of the lobster sauce.  The king crab chunks tasted like lobster chunks and nothing like king crab, as they were much harder in texture than crab.  I didn't mind though because I like lobster even more than I like crab.  The fish was seared perfectly and had such a pretty shade of pink. 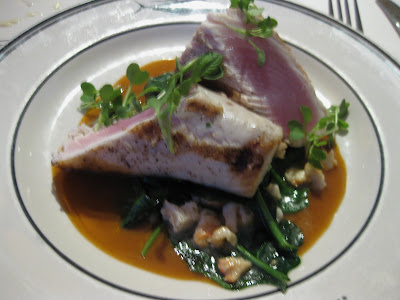 Boyfriend ordered the black and blue shark, which is a staple on the Oceanaire menu.  While Oceanaire's menu changes from day to day, the Black and Blue is something we always see when we visit.  Boyfriend really loved the fish and all the spices.  I thought the cheese on top was a bit overwhelming, but I did like the fish without the cheese. 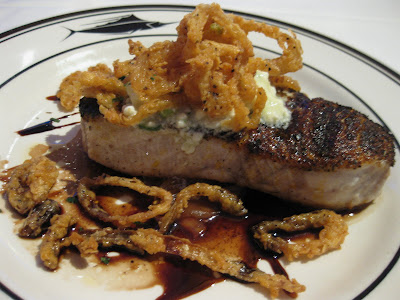 Throughout the meal, we got our waters filled by someone, but our server did not pay us much attention.  I realize that it is restaurant week and that they are busy but we've been to Oceanaire for restaurant week so many times now, and the service has always been excellent even during this busy time.

When our desserts arrived, the server put a candle in the ice cream and told us "Happy Anniversary" and then plopped down our check.  There was no inquiry into whether we were finished, whether we wanted some coffee.  And what were we supposed to do with the candle?  Do you get a wish on your anniversary?  And where was the Baked Alaska?  I knew that they still served it because I saw it served at three other tables while we were eating.

Boyfriend and I looked at each other in surprise.  Boyfriend thought he could ask someone about it.  But I didn't want to do that.  After all, there is nothing that says Oceanaire has to serve you the Baked Alaska.  It's just been a special touch that we've always received.  It felt weird requesting it.  I told him it was fine, we would just eat our desserts.

I ordered an apple raisin crisp.  The apples were a bit too tart for my taste, but it was warm and enjoyable. 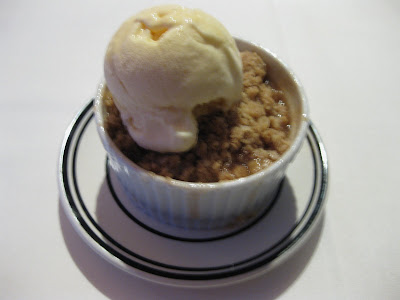 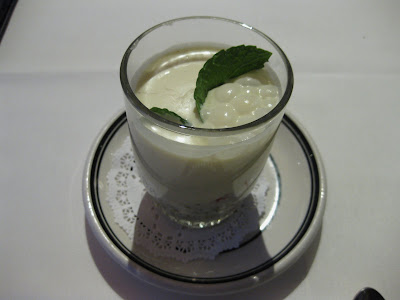 While eating our desserts, Boyfriend tried to rectify the situation (Isn't he sweet?).  With the excuse of needing to use the restroom, he went and talked to the manager.  The manager was great and told us that we should be getting a Baked Alaska since we had informed them it was our anniversary when we made our reservations.

Soon, our Baked Alaska arrived.  While I'm glad that the manager corrected the situation, I also hadn't wanted to go to the manager.  Because when you complain about the service or your server, it comes to the server's attention while they are still your server.  Which makes thinks quite awkward.  It was obvious the server had been told what had happened and while she wasn't rude, she did the bare minimal in serving us our dessert.

She placed it before us like we had ordered it off the menu, rather than presenting it like it was a treat on the house to celebrate our special day.  She lit it on fire, but there was no fancy presentation.  Then she didn't even have any plates to serve it to us on.  It took her quite a while to get some plates, and we wondered if she would be back.  Finally, she reappeared to serve us the cake.

We left that night without feeling as joyous and satisfied as we usually do. Perhaps next time we will specifically request a server we like in order to not have such a disappointing experience again.

Normally, Oceanaire extends restaurant week another week.  I don't know if they are doing that this year because the server didn't tell us, and usually they do.  I don't know if it's because it isn't happening or because the server just didn't do her job. You can read about my previous Oceanaire experiences here and here.  You can also see my other 2010 restuarant week review of Island Prime here.