Osteria Mozza is one of the Mozza Group restaurants owned by Nancy Silverton, Mario Batali and Joseph Bastianich. After sitting on my to-do list for quite a while, FH and I finally got a chance to visit for the first time a few weeks ago.

Osteria Mozza features a large mozzarella bar at the center of the restaurant where fresh mozzarella, burrata, and other cheeses are prepared daily. Chef Silverton can often be seen working at the mozzarella bar including on the night we visited. 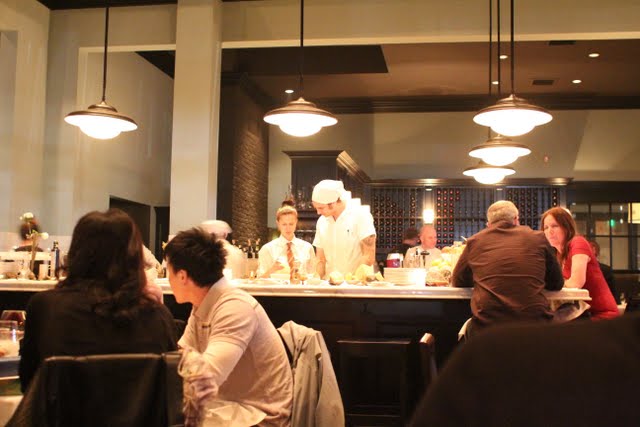 The menu is divided into appetizers, first and second courses and dessert. There is also a five course pasta tasting menu for $69 per person offered.

We started out with some cocktails and some complimentary bread.

Bread slices are served cold and solo, with no butter or other type of dipping sauce. The bread was quite fresh, soft on the outside with a nice chewy crust. I enjoyed the bread even without the butter. We were then given this complimentary bite: ricotta, black olive tapenade on crostini. 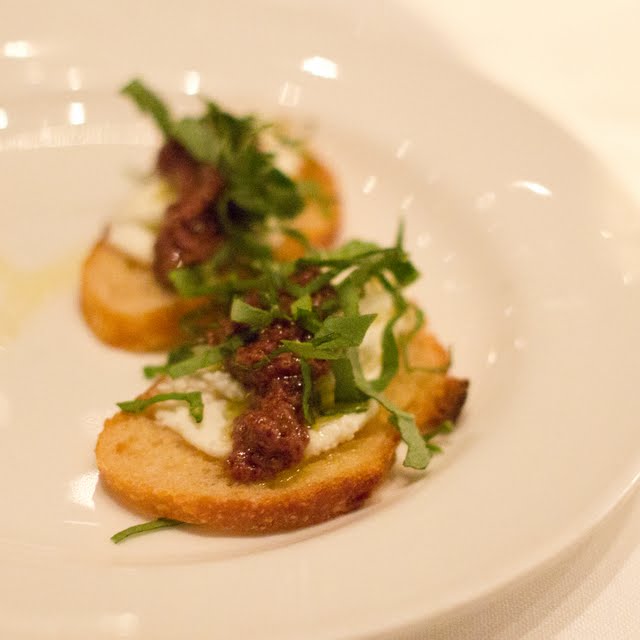 I had done my research prior to our dinner experience and knew that the mozzarella bar items were the star, so we started out with two. 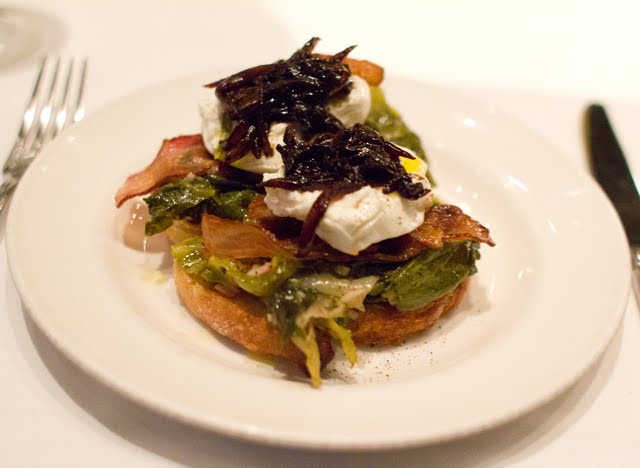 I loved the fresh burrata, but found the seasoning on this dish overpowering. The marinated escarole and caramelized shallots flavor was so strong that I couldn’t even taste the bacon. I ended up giving up and just eating the cheese halfway through. 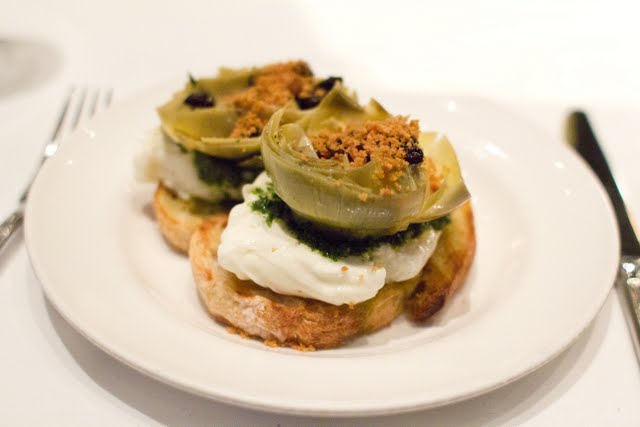 This one was much more balanced, though it was hard to eat. Again, the highlight of the dish was the fresh burricotta. I think next time I may just do the cheese tasting instead to fully enjoy the cheeses. 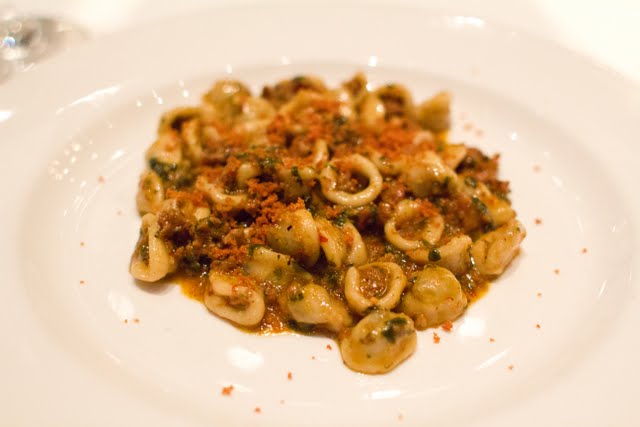 This dish was quite spicy and a little too heavy for me. I did love the al dente bites of pasta. 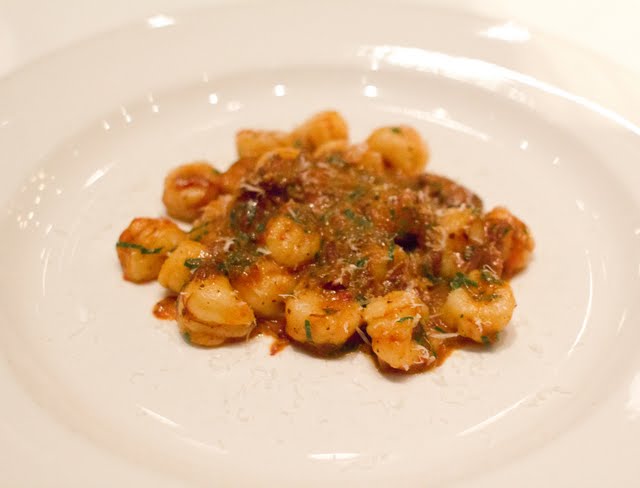 FH and I both preferred this one more. It has a much more comforting feel to it and the gnocchi was pillowy soft.

Because we did not order a second course, our waitress thoughtfully arranged for our next pasta dish to be served after the first two, to be treated as the second course. The kitchen also had it divided for us, so the picture is of a half order. 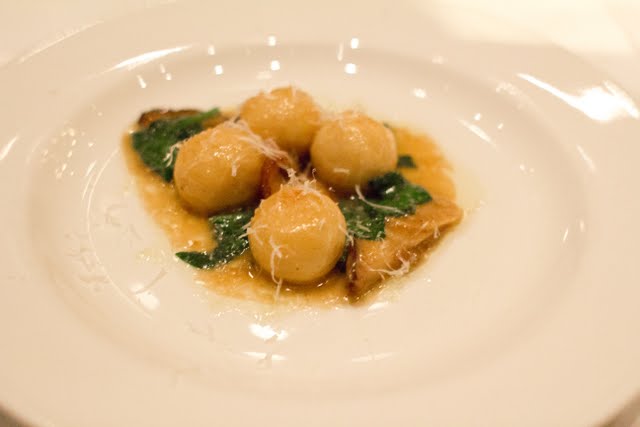 The gnudi was soft and mild and the accompanying vegetables and mushrooms was sauteed perfectly.

Of course, we left room for dessert, as Osteria Mozza offers some solid dessert choices. 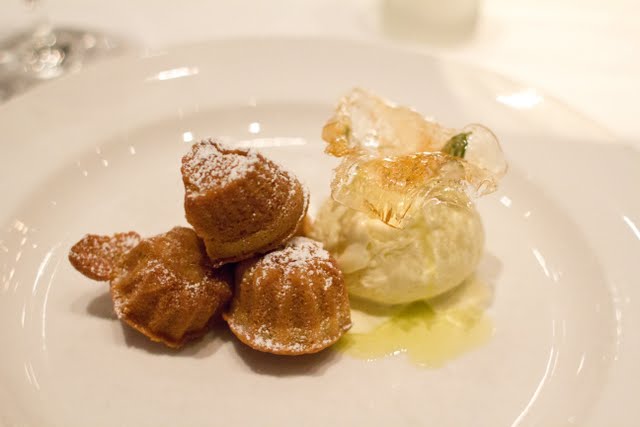 This was my favorite dessert and maybe my favorite dish of the night. The olive cakes were still hot from the oven. Light, crispy on the outside, and not too sweet. The olive oil gelato was quite interesting and I loved the beautiful rosemary brittle on top which looked like an ice sculpture. 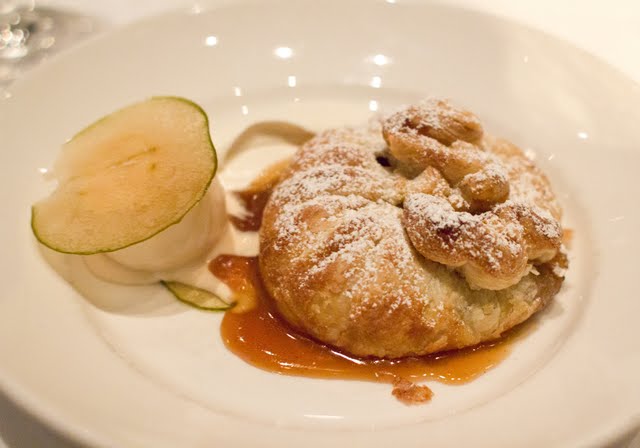 FH preferred this one because it reminded him of apple pie. It’s like an apple pie wrapped in flaky pastry. My favorite part was the apple cider gelato. The apple slice garnish is actually enclosed in sugar, similar to the rosemary brittle.

Overall: We had a solid meal here. I was especially impressed with the service. While good service is to be expected at these kind of restaurants, I found the staff to be especially attentive of details. While we didn’t have much to complain about for our meal, we did feel like it was a bit overpriced and overhyped (we had to make our reservations weeks in advance). Compared to some of our other meals, it doesn’t make our list of favorite meals for 2011.