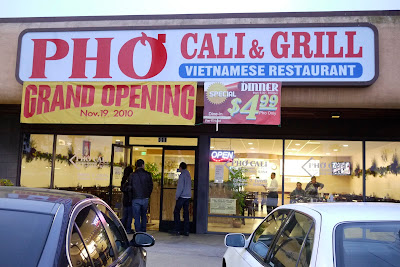 Last time I visited Golden City restaurant I noticed that a pho restaurant would soon be opening. I don’t usually pass by this area, but I recently drove by and saw that the pho restaurant had opened.

So this weekend, we went to go check out the restaurant. It’s pretty spacious inside, and on the night we went, it was also pretty empty. They have a website, which provides a full menu. 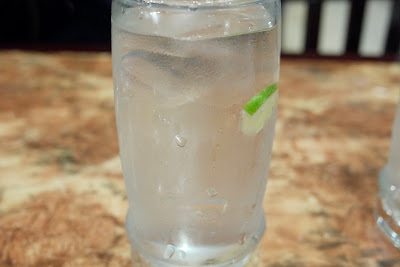 Our water arrived with wedges of lime. I also noticed that the chopsticks and other utensils all had paper covers which was a nice change. Usually the chopsticks at pho places are all centered in the middle uncovered. They usually have a sticky texture from laying out and we always wipe ours down before using them. But we didn’t have to do that here. 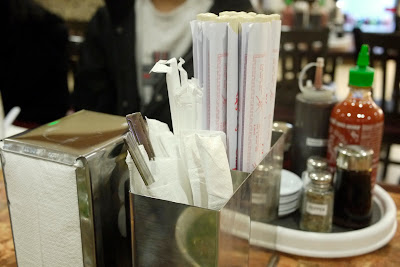 The menu had some other options, but we all decided to stick to pho. Our toppings were a little sparse. I wish they had the saw leaf herb I like so much. 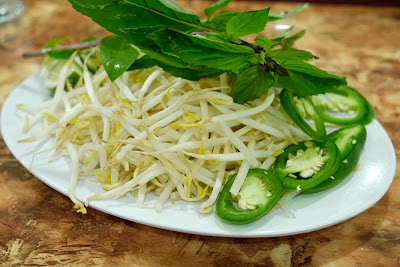 I chose my usual, the steak and tripe. I thought the regular pho bowl seemed a bit small, especially compared to the large. 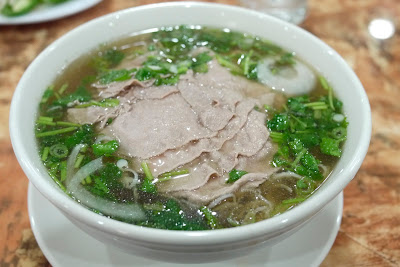 Here is a regular next to a large for comparison. 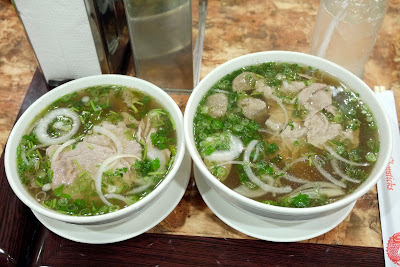 My rare steak was already cooked when it arrived, which is usually a bad sign since beef can be easily overcooked.  However, the meat was sliced into very thin pieces  and so it actually didn’t taste too tough or dry as it sometimes can end up. My noodles were a tad on the mushy side though and I also thought the soup was a little salty.

Since almost all the pho bowls look the same, with varying ingredients buried inside, I decided not to take photos of everyone’s. 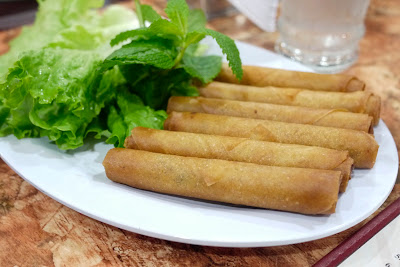 The service was pretty good that night. The refilled our waters constantly and even helped pack away our leftovers. They were also very patient with taking our orders. Usually at the pho restaurants the waiters are impatient to take orders, but here we were told to take our time.

The food was just so-so. It’s comparable to the other pho places in the Convoy area. With a price of $4.99, it is also the cheapest bowl of pho you can get right now. I’m not sure I’ll visit once it goes back to regular price, but with the special price right now I’ll probably visit a few more times.