A few weeks ago, I had the opportunity to lunch with some of my favorite San Diego food bloggers. I already blogged about our dessert experience. It was a great chance to catch up and try more of the exotic offerings on the menu (Crocodile anyone?). Our group consisted of myself, FH, CC of Pink Candles at Ridgemont High, Dennis of A Radiused Corner and CC’s friend. 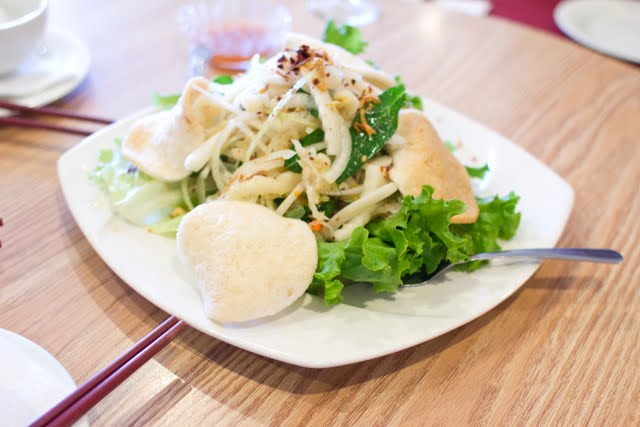 We ordered this on the recommendation of our server. I’ve enjoyed the various salads I’ve tried at Que Huong but had not had a chicken feet salad. To tell you the truth, even though chicken feet is used in chinese food, I’ve always been a little squeamish when it comes to eating chicken feet. 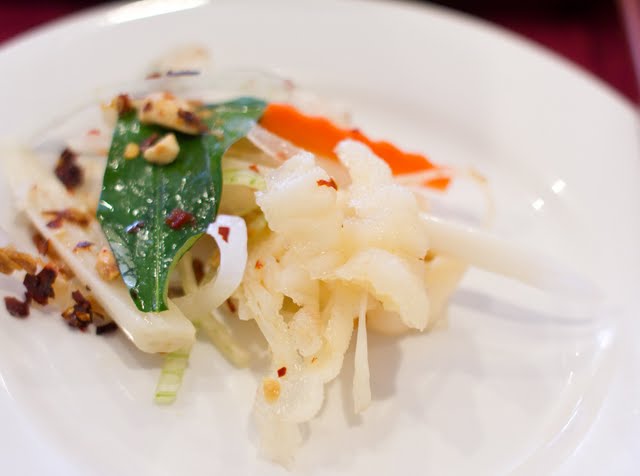 In this salad, it was served boneless, so it was cut up into  pieces. I thought maybe this would make it easier for me to eat. I liked the spiciness of the salad and the lotus stems. The chicken feet tasted like crunchy and chewy cartilage. It seems most people really enjoyed this but I was still couldn’t really eat the chicken feet because I could still tell they were chicken feet pieces. You could see the bumps on the skin. 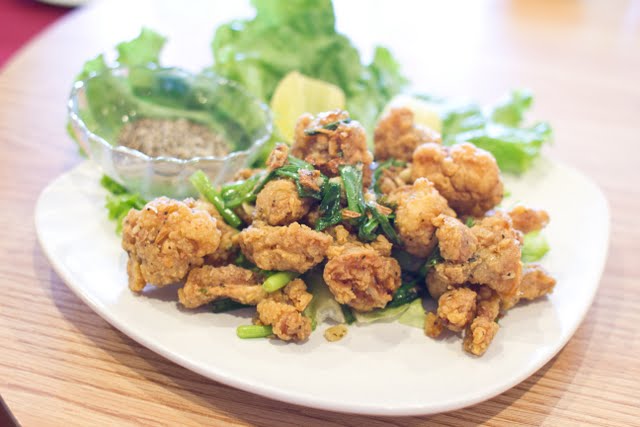 We had actually ordered the pepper grilled frog legs but the server made a mistake and ordered the buttered frog legs for us instead. It was a happy accident because the butter frog legs smelled heavenly. Deep fried, with the aroma of butter, the batter practically melted in my mouth. I really liked the taste of these frog legs. Like with chicken feet, frog legs make me a little squeamish. I actually like eating frog legs but after I had a few pet frogs I always felt too guilty to gnaw on a leg. Since the frog legs were all chopped up for this dish, I felt less guilty eating the frog pieces. 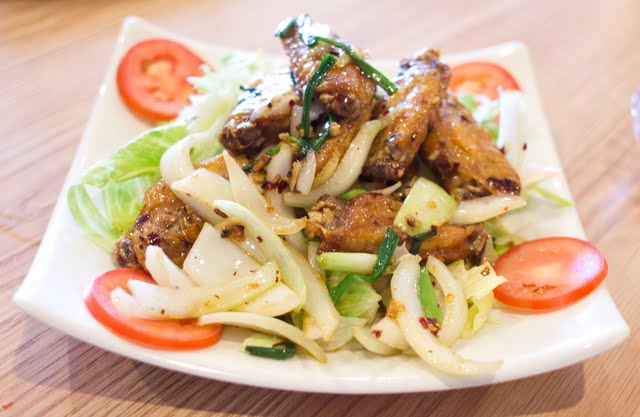 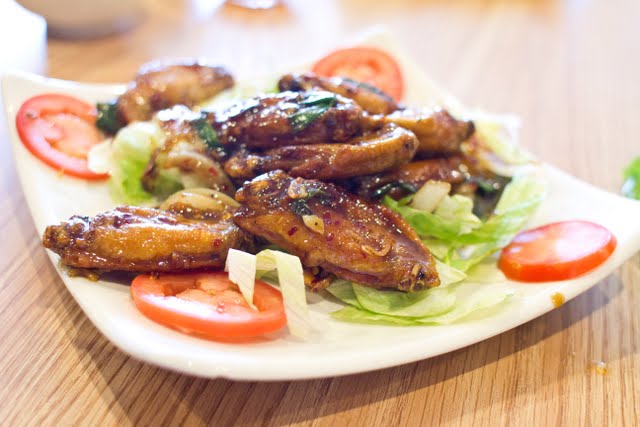 Que Huong offers four different flavors of chicken wings but fish sauce and tamarind are my favorite. The fish sauce one is a little more pungent and the tamarind one a little sweeter. Both are delicious. Very crispy with a lot of flavor. Next to Kyochon, these are my favorite chicken wings. I need to remember to get them for our Superbowl snacking this year. 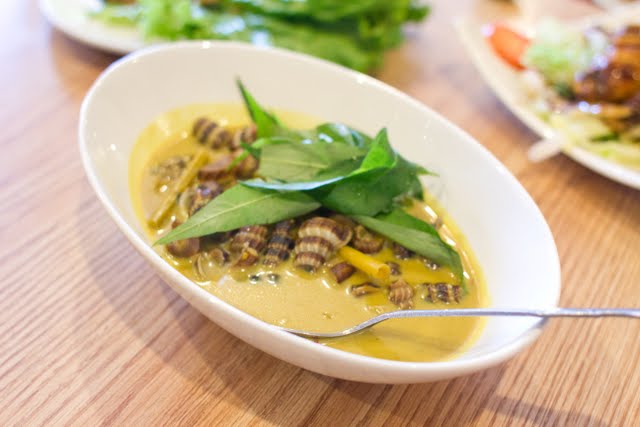 FH and I tried this previously and we really liked the dish, especially that coconut sauce. I just want to eat a bowl of rice drenched in the sauce. The escargot meat is very small and you suck it out of the hole of the shell. 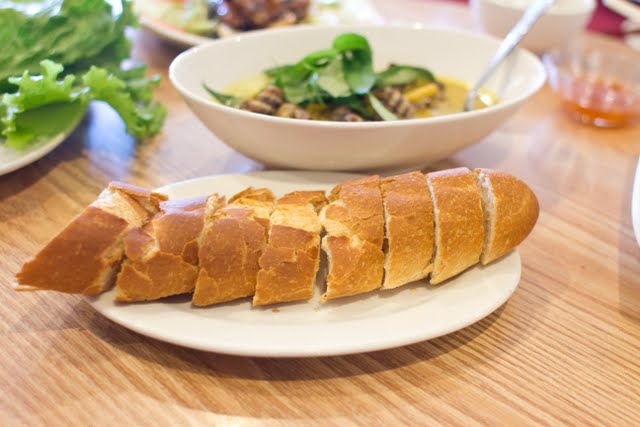 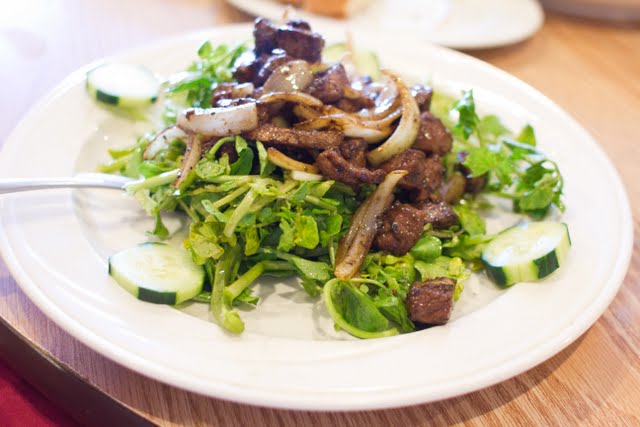 This was my first time eating this dish. I liked how tender the chunks of meat were. 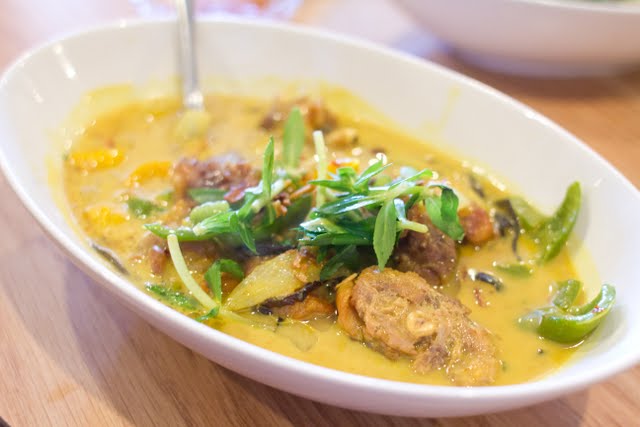 One of the meats we had been really interested in trying was crocodile meat. The sauce the crocodile was cooked in was the same as the escargots.

I first took a small chunk. The meat didn’t taste like much to me. It tasted a bit like rabbit, basically a chewier and gamier version of chicken. But then everyone was commenting that it was fishy. I didn’t get it from my initial piece but then I bit into FH’s chunk which was much bigger. And it was really fishy! It was really unexpected. I guess the fishy flavor comes from the crocodiles spending so much time in water, but I never would associate crocodile meat with a fishy flavor. I didn’t really care for the fishy flavor and it doesn’t seem like anyone else did either. I took home the leftovers for my brothers who were excited to try crocodile and didn’t notice the fishy taste.

I had a fun time and at the end of the meal, CC gifted us each with a box of Hogetsu mochi. I was so excited! I adore the mochi from Hogetsu but it’s quite a far drive for me so I don’t go often. I love them when they are fresh and super, super soft. The chick shaped one was so adorable. I’ll cover these in more detail in a later post. 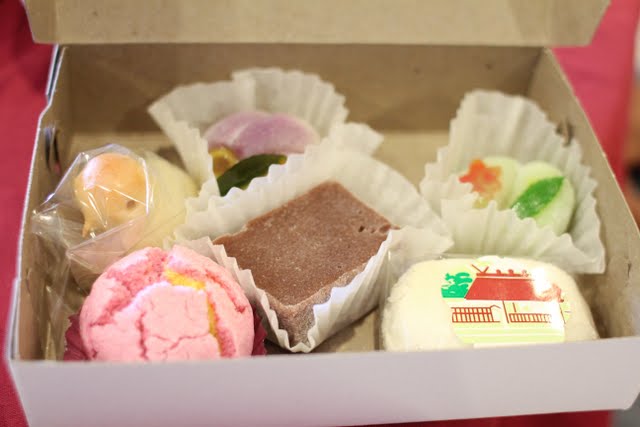 When we were leaving there was some sort of block party going on with Little Caesar’s Pizzeria. There was a mascot who waved at me so I had to wave back. 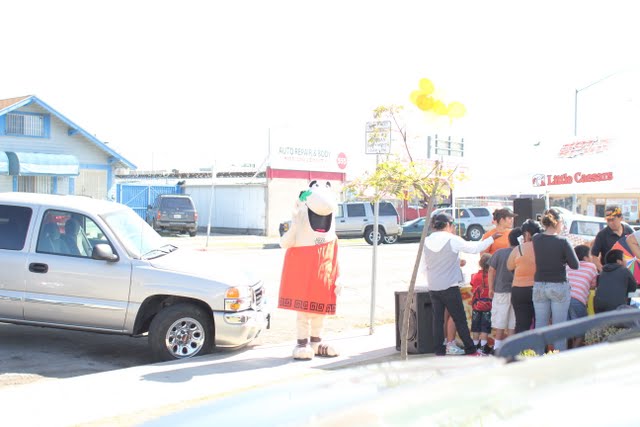 As a quick reminder, you can still enter my giveaway here.

You can read CC’s account of our meal here.

You can read my previous Que Huong posts here and here.