Inside Regents Park Row is quite a few eating places including a japanese restaurant, Hawaiian restaurant, Papa John's pizza, Einstein Bagels, Tutti Frutti frozen yogurt. I had a bunch of coupons for restaurants in that complex and decided to use a bunch at once.

Our first stop was Einstein Bagels. Since becoming a fan of their site on Facebook, I often get a free bagel and smear coupon.  Since I previously blogged about my bagel and smear here, I didn't bother taking out my camera. But of course I wish I had after I had finished half my bagel.  With Spring here, they had a few interesting offers. For instance, a mango and orange flavored bagel. And a peach and mango flavored smear. I opted for the peach and mango smear on a potato bagel. Boyfriend opted to try the smoked salmon smear on a potato bagel. Both were good.  The smoked salmon smear had little pieces of smoked salmon. I was impressed. I thought it would just be smoked salmon flavored.  The mango peach was sweet and almost like ice cream. 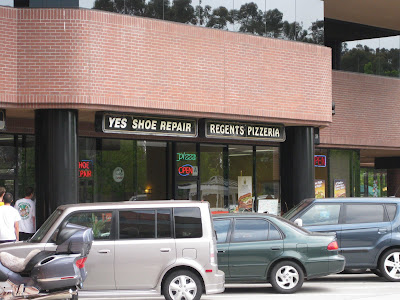 Our next stop was Regents Pizzeria. Here, we picked up a free slice of NY style cheese pizza.  The slice was very generous. And we loved how it tasted. The crust was crispy and thin.  The sauce was flavorful and with just the right amount added. We were impressed enough with our free slice that we came back the next night to get two pizzas, which you can read about here. 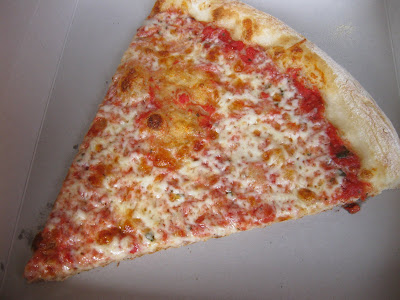 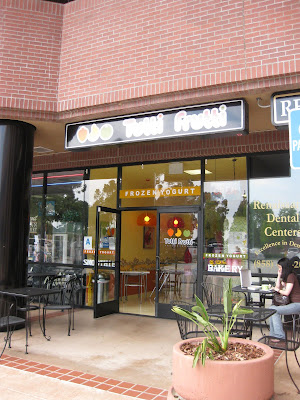 Finally, we stopped at Tutti Frutti, where I had a coupon for .28/oz for the yogurt. I've been visiting the Tutti Frutti at another location, the one on La Jolla Village drive.  You can read my very old post of it here.  This location has less frozen yogurt flavors and less toppings.  One thing I did like was the pretty multi colored mochi! But that was about it. I didn't like how there were less flavors and I found the yogurt to be a bit too watery. I'll stick to the La Jolla Village Drive location next time. 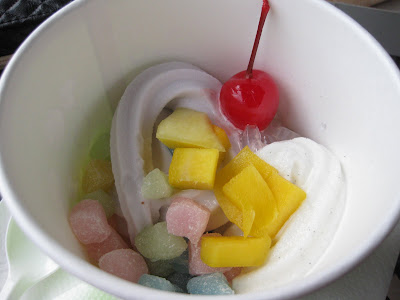