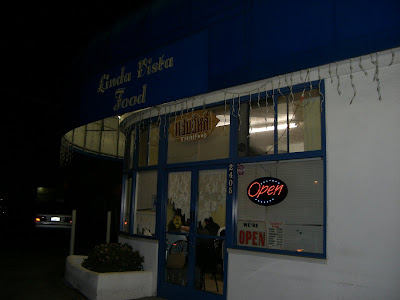 So I have been searching for good Thai food in San Diego for a while now.  I used to love Celadon.  But that was before they moved it, vamped it up to look like a bar/lounge, stuck a bouncer outside the place, and put it next to a mortuary (how morbid is that?)

Since then I have tried various Thai places without being very satisfied.  The other day, I was reading my favorite blog again, and found a post on Sab-E-Lee.  You can view it here.  Unfortunately for me, I discovered this place at the same time that many other San Diegans discovered this place, thanks for a recent positive review from The Reader, or so that is what I heard from yelp.

This place is very small, and the sign says Linda Vista Foods, rather than Sab-E-Lee.  Inside, you can seat about 20 people.  Because I had read recent reviews on yelp about how overwhelmed this place was thanks to The Reader, I was prepared for a long wait.  I decided to place an order to go.  I called in around 5, and was told the wait would be an hour.  I said no problem.  I was already set on Thai food, and didn’t care about the wait.

The most amazing thing for me about this place is the price!  Usually I find Thai food a bit on the expensive side.  But if you look at the menu, which can be found on their website and I have also taken a picture of their paper menu here, almost all the dishes are below $7!  I ended up order 6 dishes, with a grand total of $50 and some change.  It fed 5 people, with plenty of leftovers.

Now onto the taste.  I definitely felt this place was authentic tasting.  However, there were some dishes that were a bit disappointing.  Here’s a rundown of the stuff I tried:

Spicy Raw Beef- Definitely the highlight of the dinner.   Bits of mostly raw beef is seasoned/cooked with slow-burning peppers.  When you first take a bite, you don’t feel the spice.  As you continue to chew, it gets spicier and spicier, until the point when you are about to swallow, that’s when you feel the burn in your throat.  I loved it! haha.  Strangely though, when I later ate this dish cold, the spicines seemed to disappear. 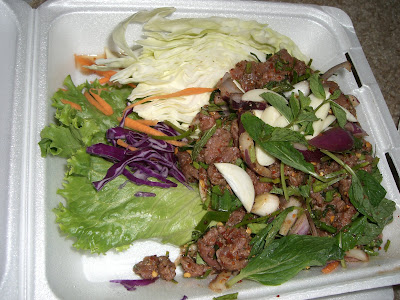 Phad See-Ewe with beef-  This dish had good flavor.  The only part I found disappointing was that the beef was a bit overcooked.  Definitely on the dry and tough side.  The noodles were cooked right though.  This dish wasn’t particularly memorable, but it tasted alright. 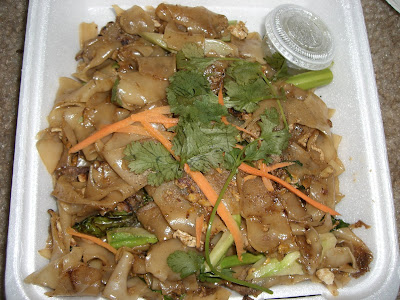 Combination fried rice-  I enjoyed this dish.  I usually like Thai fried rice though, so it’s hard not to please me with this dish. The meat was slightly on the tough/overcooked side though. 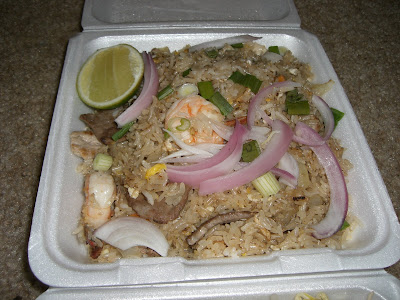 Pineapple fried rice-  I was disappointed with this dish.  Usually pineapple fried rice has a lot of ingredients.  This one had mainly large chunks of onions and cashews and a few pieces of pineapple.  The cashews were soft and soggy rather than crispy. 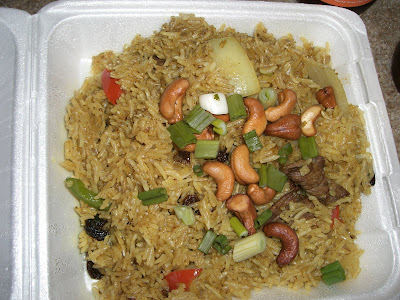 Papaya Salad- I’ve never eaten papaya salad before, but after reading good reviews, decided to try the one here. I enjoyed it, though I don’t have much of a comparison.  It was pretty spicy and the papaya has a picked/sour taste.  Pretty yummy. 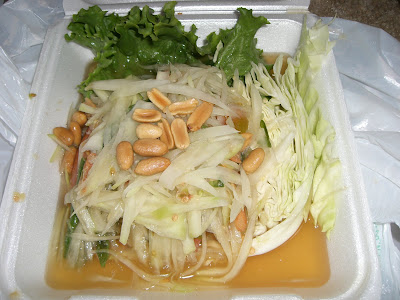 Phad Thai-  This dish went fast.  I only wish they gave us more.  It’s been a long time since I’ve had decent phad thai, which you would think is something that most thai places should be able to  get right since it’s such a common thai dish.  I’m not saying this was the best Phad Thai I’ve ever had, but it was made right, with just the right combination of sauces so it wasn’t too sweet or sour. 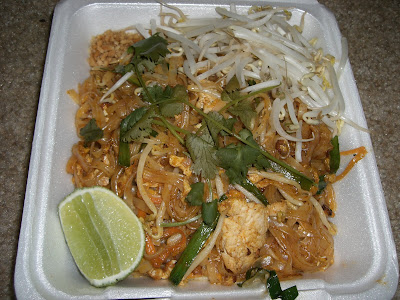 Thai Sausage (Northeastern style) – I’ve never tried Thai sausage and have to say I was a little bit underwhelmed by this dish.  In fact, most of this dish was let untouched, so no one in my group really liked it.  I don’t think it tasted bad, it just didn’t stand out much in terms of taste.  It’s slightly sweet/sour. 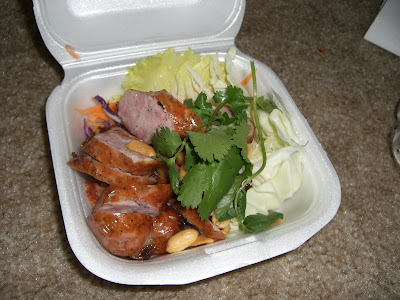 Overall, a pretty good thai experience.  I was a little disappointed with the overcooked meat, but I think it may be due to how busy they suddenly have become.  Given the prices and nice people, I will definitely be back.