My original post on yum cha cafe can be found here.  The other night, I was killing time while waiting for my take-out Thai food from Sab-E-Lee.  Since Yum Cha is across the street, I decided to go by and see what kind of dim sum offerings it had in the evenings.  Up until this point, I have only been here during breakfast/lunch hours, the normal dim sum time.  But I noticed that they are open untl 8:30, and thought that maybe they might have some dim sum still left in the evenings.  It was about 6pm when I got there, and lo and behold, there were still many items left! Obviously, not as many as in the day, but enough to satisfy some/most of my dim sum cravings.  Also, there were hardly any customers, leaving a ton of workers with nothing to do.

It was the best service I have had! So many employees just standing around waiting for people to get some dim sum.  The ladies even began making suggestions and asking if I wanted other things that I had not pointed to.  I picked up some shrimp har gow, shrimp shui mai, beef tripe, beef honeycomb tripe, chicken sticky rice, giant steamed bun with various meats inside, pan-fried pork steam bun and egg tarts.  Since I have so many pictures in my original post, I only took pictures of items I have not taken pictures of before:

Pan-fried pork steam bun-  I just made up this name, as I don’t really know what they should be called.  They are pork steam buns that have been pan-fried lightly on each side, to create the brown crispy texture.  I think this might have been their version of Shen Jien Bao, but it was disappointing.  Since it had been sitting for a while, it wasn’t crispy.  Also the dough was too sweet. And the filling not very flavorful. 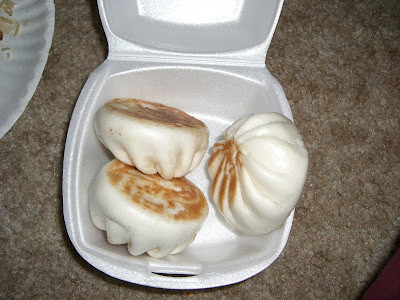 Chicken sticky rice- Normally I don’t get these at dim sum places.  They don’t usually taste very good and I prefer to get the bigger ones that have more stuff inside that you can buy at a chinese grocery store.  However, one of the ladies asked if I wanted to try it, and being that I was hungry and there was no crowd around that made me want to get out of there as soon as possible, I decided to give it a try.  I was pleasantly surprised!  The sticky rice and chicken is nicely flavored.  Not too oily, and a lot of chunks of meat and some mushrooms. 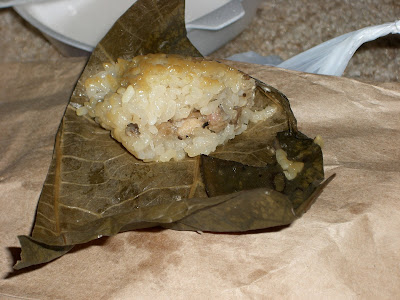 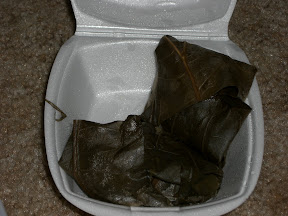 Giant steam bun-  One giant bun, filled with egg, sausage and some other meats.  The bottom was a bit soggy.  Not my favorite meat steam bun option.  I prefer, chicken or pork or the red pork (cha siu). 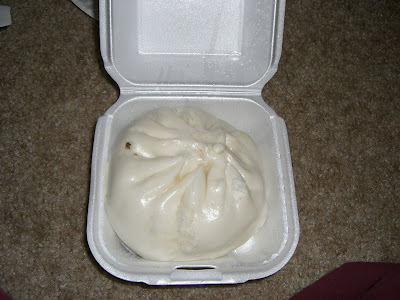 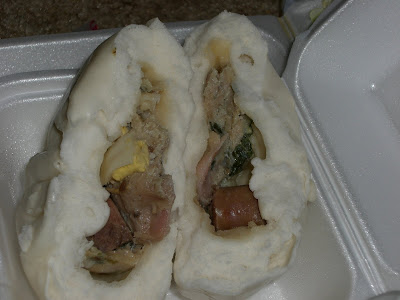 Red bbq pork (cha siu) with sweet bread- Usually I find this meat in a white steamed bun. I’ve never actually eaten it in a sweet bread before.  I loved the outside glaze.  I thought it made the bread very pretty.  It is a bit sticky though, which is annoying.  The taste is similar to it being in a bun. 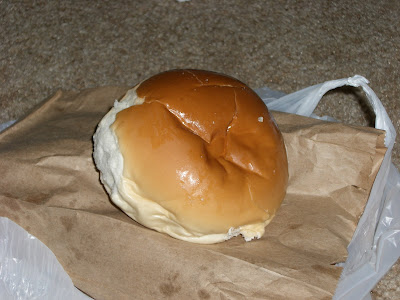 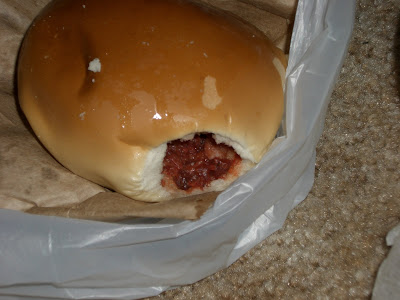