One of the restaurants I was set on trying out before the end of the year was Slater’s 50/50, a burger chain famous for their heavily bacon-themed menu.  They are especially known for their 50/50 burger patty which is 50% ground beef and 50% ground bacon.

We had sampled Slater’s 50/50 burger at various tasting events this year, and it was definitely the most popular vendor at all the tasting events we went to. So with all the talk of Armageddon, it seemed like a good time to speed things up on a visit before the end of the year and Slater’s is even offering an Armageddon burger until the end of December.

The restaurant bar features a huge selection of beers. 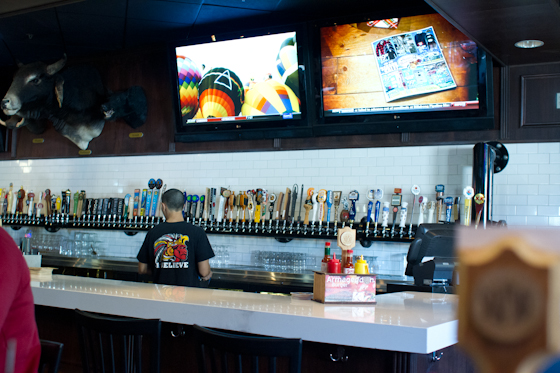 I immediately was entranced by the bacon salt on the table of condiments. It did indeed taste like finely ground salty bacon. 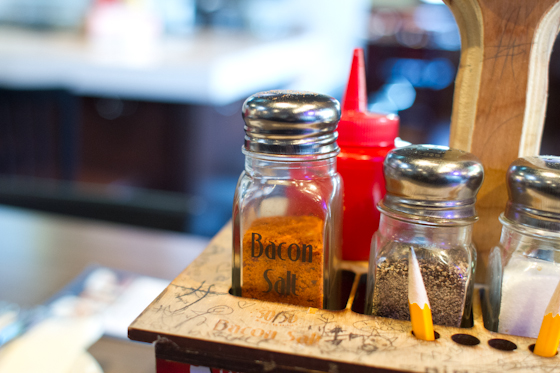 The burger menu provides quite a few options. In addition to pre-designed burgers, they also have a build-it-yourself option, a popular trend for burger joints this year. 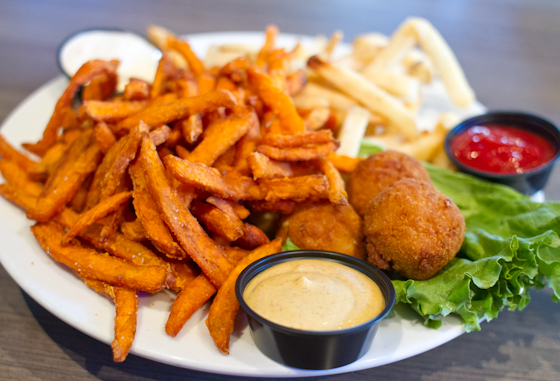 You can choose different appetizers to make your own combination plate. Since we couldn’t decide on just one, this was perfect. We chose three: sweet potato fries with pumpkin sauce, house fries with bacon infused ketchup and fried mac and cheese balls. 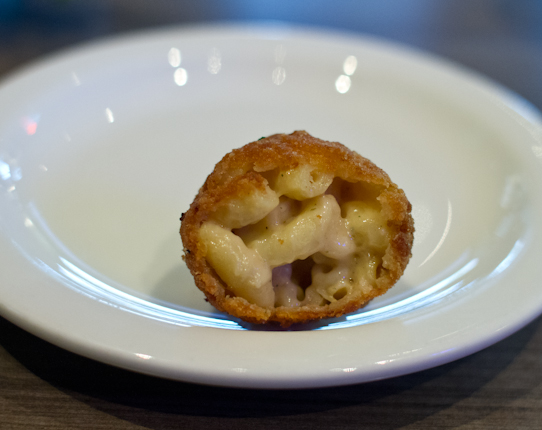 I’ve never seen a pumpkin dipping sauce offered with fries and the sweet spiced sauce went well with the sweet fries. I was pleasantly surprised with the regular fries too. I haven’t liked many, and I don’t usually like thick ones, but these were just crispy enough on the outside and packed a lot of potato in each fry. I was a little disappointed with the ketchup. While there were bits of bacon mixed in, I couldn’t actually taste the bacon in the ketchup itself. The mac and cheese balls were pretty much your standard fare, but still good. Creamy mac and cheese shaped into a ball and deep fried. 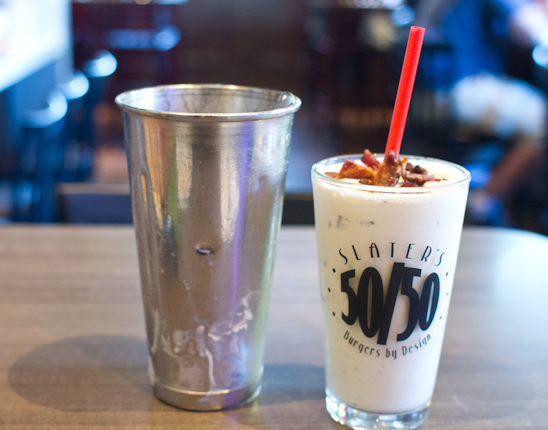 I’ve heard really great things about the bacon milkshake here, so we had to try it. I personally found the shake to be too sweet with too much maple syrup. Having the bacon chunks inside actually wasn’t weird. In fact, I quite enjoyed munching on them coated with milkshake, but I would have actually liked to see a less sweet version of the milkshake so that the bacon flavor could come through a little more. This shake was packed with bacon bits though. I hope no one ever shows me the nutrition fact chart on it. 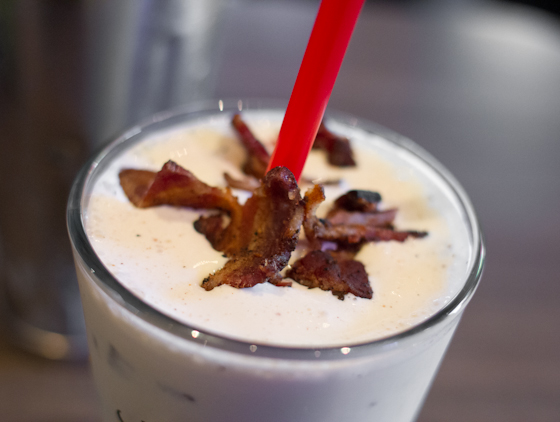 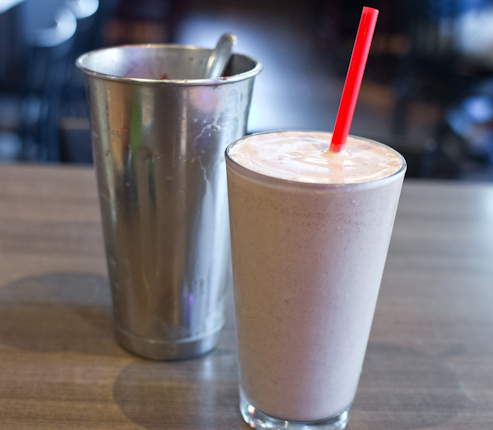 Of course I had to get this right? I preferred this shake. It even had globs of pure Nutella spread inside. 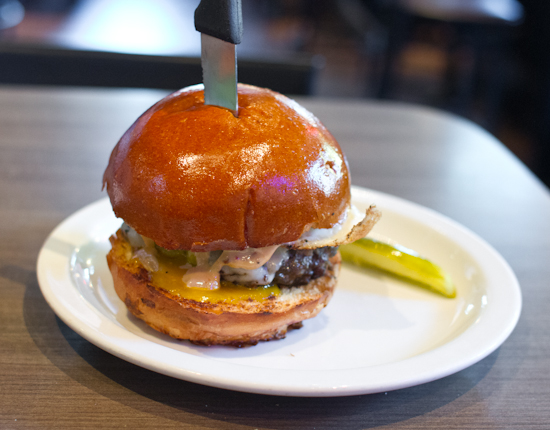 It took me a long time to decide which burger to go with. So many options sounded good and so did the design your own option. But in the end, I decided to try their famous 50/50, which I had sampled in smaller portions at tasting events. 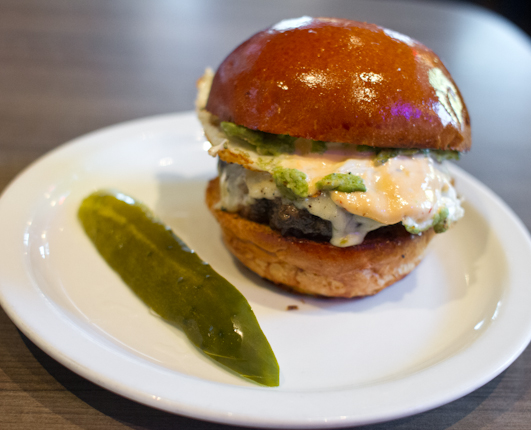 My burger patty was cooked to a perfect medium, as I had requested. I love the fried egg on top. You could definitely taste the bacon in the patty without it being too salty. 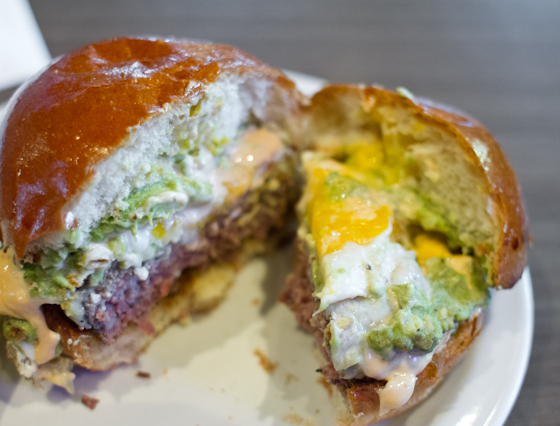 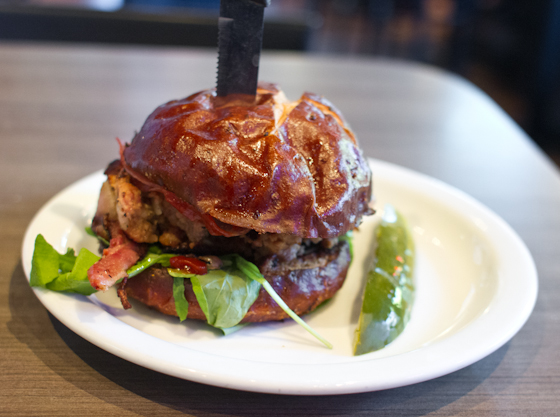 Since this is only available until the end of December, we decided to try this one as well. The burger consists of a meatloaf patty that also uses the 50/50 ratio of beef and bacon. It’s then topped with strips of prosciutto, arugula, and served on a pretzel bun. I think the idea is to combine home comfort food wrapped into a burger. 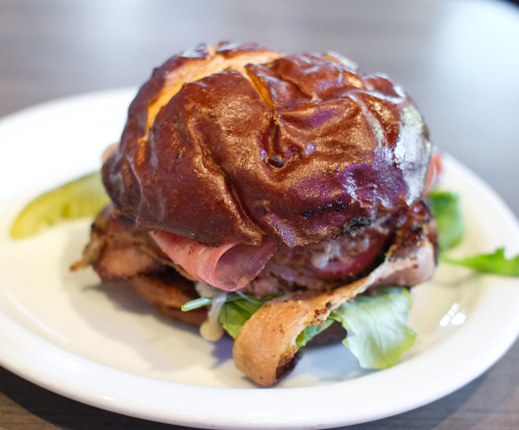 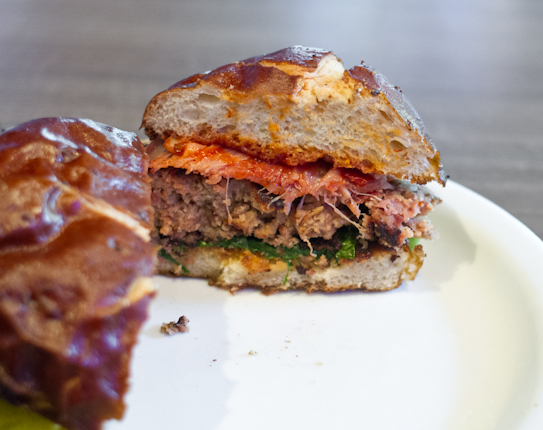 While I enjoyed the prosciutto and the pretzel bun, I thought the meatloaf patty was too salty, probably because of the use of bacon. 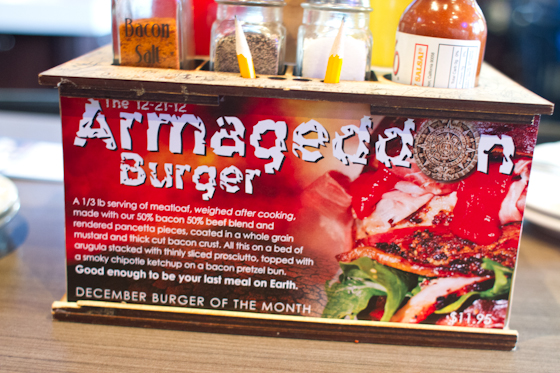 I was particularly impressed with the service here.  I had read on yelp about the good service and I got to witness it for myself. While we were there, not only were all the tables checked on constantly by the servers, but also by two different managers.

I’m glad we finally got a chance to visit. Lately, I’ve heard mixed reviews about Slater’s. While I have had better burgers in San Diego, in terms of all the burger chains that have popped up in the last year or so (and there have been dozens), I think Slater’s is the best of the bunch. I’ve heard that the wait during dinner can get quite long. I recommend coming for lunch. There was no wait when we went on a Saturday for lunch.

Disclosure: Even though we had already been planning on coming to Slater’s before the end of the year, we actually got invited to check it out before we had a chance to make our way over. This meal was complimentary, but my opinions are my own.