After a good experience at the sneak peek of Smashburger in Del Mar, I was excited to see another location opening in Mission Valley, which is closer to where I live.

Since Smashburger is a chain, I thought the food at the Mission Valley location would be similar to the food at the Del Mar location. But my experience ended up being vastly different.

I ordered a mushroom and swiss burger. 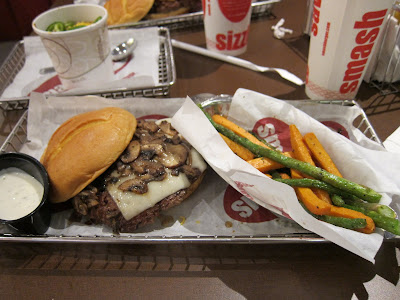 One of the things I had loved during my Del Mar experience was that the bun stayed dry. The bottom bun for this burger was soggy and oily. Also it seemed like the patty was too wide for the bun. Most of the meat was outside the bun area.  The worst part was that the meat was extremely oily.  At first, I thought it was a result of the melted swiss cheese, but when I tried BF's burger, it was also super oily. It ended up being too oily for me to even finish.

I also got a side of vegetable frites, which I had heard good things about.  Carrots, beans and asparagus are flash fried without any batter and seasoned.  Because they are flash fried, the vegetables retained their crunchiness. The seasoning made the vegetables pretty tasty and I guess it's a healthier alternative to fries. 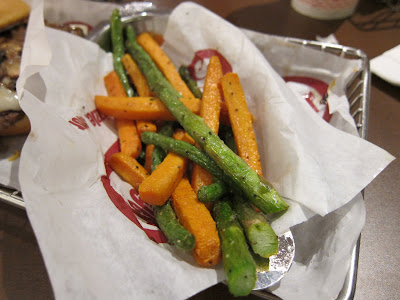 BF got the bacon cheeseburger.  He got a side of the smashfries we had enjoyed last time and he also got a side of chili. He thought the burger was too oily as well, and his bun was soggy. 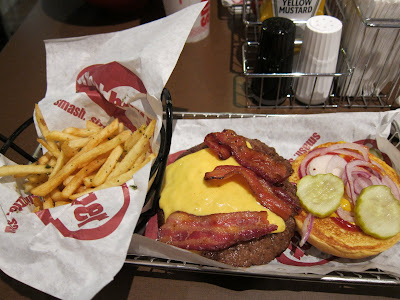 He liked the chili though. I thought the chili was alright, but nothing special. 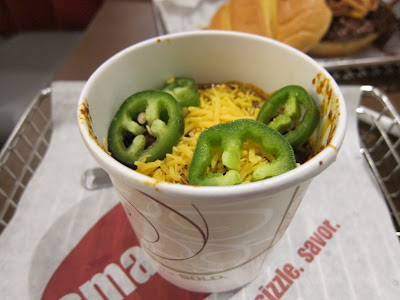 My favorite thing of the night were the fries.  I like rosemary and olive oil they are cooked in.

I probably won't be back at this location. I haven't yet tried the La Jolla location. Perhaps I'll try it next to see if it matches my Del Mar experience.