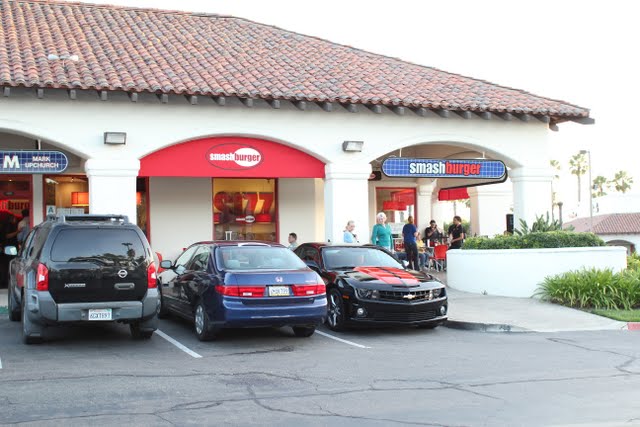 Smashburger is taking over San Diego. The opening of the Rancho Penasquitos branch was the fifth location to open in San Diego within the last year or so.  A sixth location in Kearny Mesa is slated to open September 8th (read more information about it below and how you can get a chance to attend the VIP sneak peek party!)

I was invited by the people of Elle Communications to attend the sneak peek VIP party held the day before this new location opened. As you may recall, I’ve been lucky enough to attend two other openings, which you can read about here and here.

FH and I were happy to attend. We’ve enjoyed the burgers and fries here, and getting to sample so much of the menu for free is always a plus.

This opening was particularly fun because we ran into so many food bloggers! You can read recaps of the event from CAB Cooks, Three Dog Kitchen and Foodies: A Southern California Food Blog. Best of all, C of CAB Cooks gifted me with homemade pie! I was so surprised and excited because I had been dying to know what her homemade pie shell using lard tasted like. (Answer: Really really good. I need to gather the energy to make my own lard, or move next door to C.) It’s been a really long time since someone gave me home baked goods, since I’m usually the one baking and giving, so her gesture was greatly appreciated and it was the highlight of my night.

One of the nice things about this location is the ample parking. It’s located in a shopping center with a Vons and some other stores and restaurants. The inside appeared roomier than the downtown location. However, despite the extra room, we couldn’t find any seating indoors and had to sit outside. Normally that would be okay, but it was particularly cold that evening, so sitting outside was not so fun, especially since our food got cold so quickly.

Like all the other Smashburger events we’ve been to, the entire menu is open for your ordering (and you can order as much as you want), except for their famed Haagen Dazs shakes, which they were passing out little sample cups of.  The downtown location actually allowed people to order full sized shakes for the first part of the night, but I think it’s  been the only location that has done that.

In addition to several different pre-created burgers, you can also build your own burger. I haven’t been able to give up my favorite, the San Diego Smashburger, so I ordered it again. I’ve tried a couple of the other ones and haven’t liked them as much. I realize now that I should have tried some other menu options that I haven’t sampled like their chili dog or chicken salad. I’ll have to remember that for next time.

You can choose between a “big smash (1/2 pound patty)” or a “small smash (1/3 pound patty).” My favorite part of the burger is the meat so I always go with the Big smash. 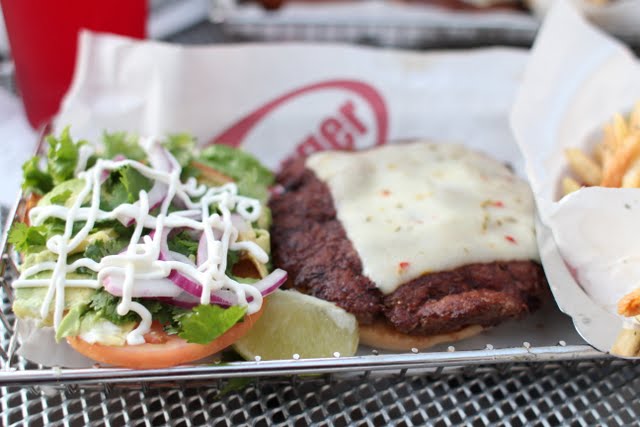 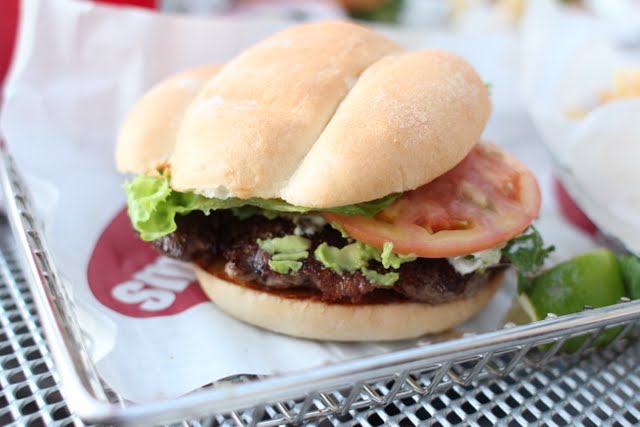 Unfortunately, my San Diego smashburger wasn’t as good as usual. I think they messed up with the toppings. It’s supposed to be a chipotle mayo, but I saw a ton of regular mayonnaise on my burger, which I dislike.  It was still good, but just not as good as my previous San Diego Smashburgers.

I also ordered the Smash fries, which are my favorite side. Thin cut and tossed in olive oil and herbs. The side portion appeared to be smaller than my visits at the other locations, but I had trouble finishing them, so maybe it wasn’t that small of a portion. Since we were sitting outside, the fries cooled quickly, and cold fries are never a good thing. 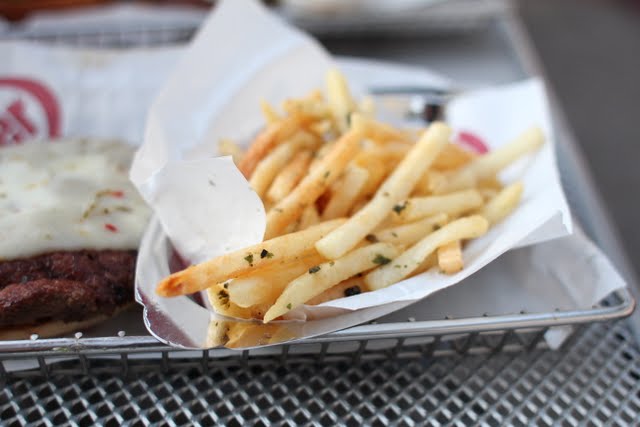 The other problem with sitting outside was that we couldn’t get our hands on any shake samples! The staff was busy making them, but the people inside would take them all before they ever reached the outside crowd. 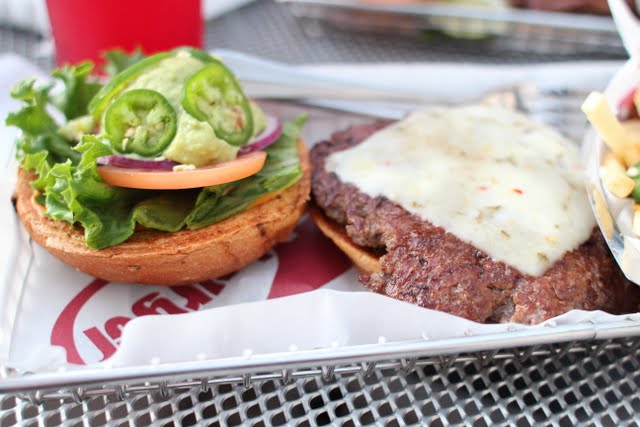 He really loved his burger and his patty was quite big. I liked it too, except that the bottom bun was a little soggy. I hate soggy buns. 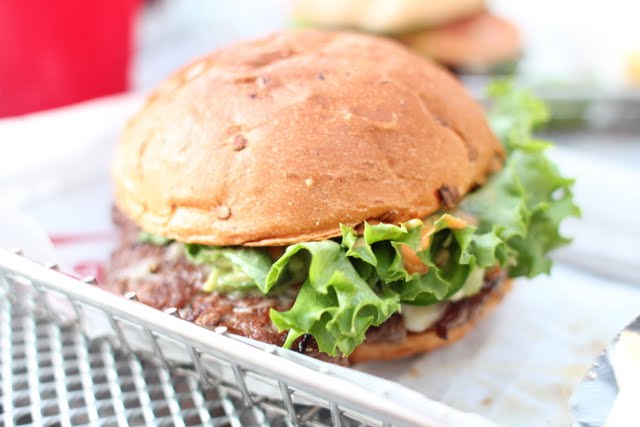 He was really excited to see chili fries on the menu, and chose that as his side. I liked the fries, but I didn’t love them. And they got cold quickly so it was hard to properly judge them. 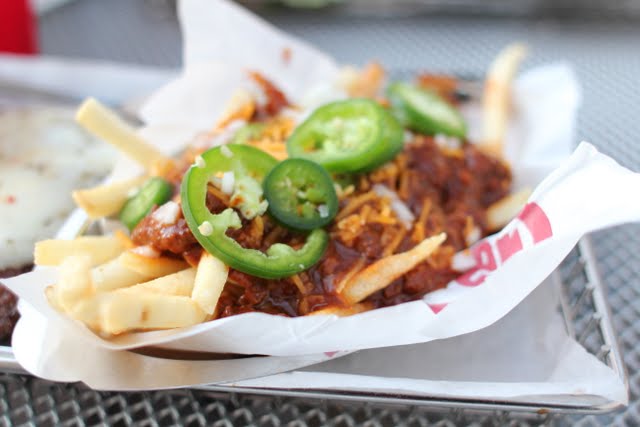 We might have tried out the chili dog, but I was freezing, so we ended up calling it a night. No shakes for us, unfortunately. Hopefully we’ll get better seats at the next opening.

Speaking of the next opening, as I mentioned above, the Kearny Mesa location is scheduled to open on September 8, 2011. Like all the previous Smashburger openings, there will be a sneak peek party the night before, allowing invitees to sample whatever they want on the menu. Per a press release issued by Elle Communications:

To get a preview of the newest San Diego Smashburger location, Smashfans may enter to win a chance to attend the “Sneak Peek Party” on Wednesday, September 7, 2011 from 5:30 to 8:30 p.m. by emailing their full name, home address and mobile number to [email protected] . Subject line should be titled “Kearny Mesa Sneak Peek Party.” Guests will be selected at random from the pool of entrants. Guests will be selected by Friday, September 2, 2011.

I’ve known several people who have won this opportunity for previous openings, so if you want free food and want to attend this event, I definitely encourage you to enter. Good luck!