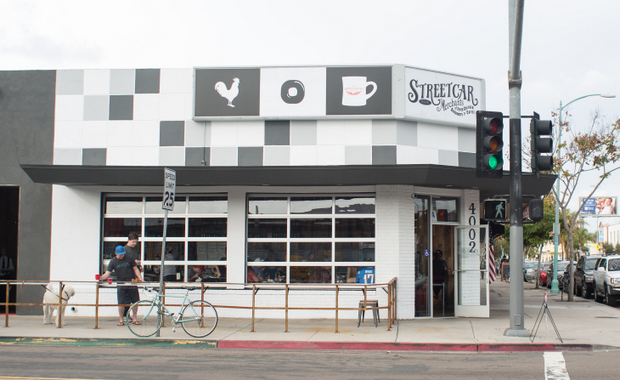 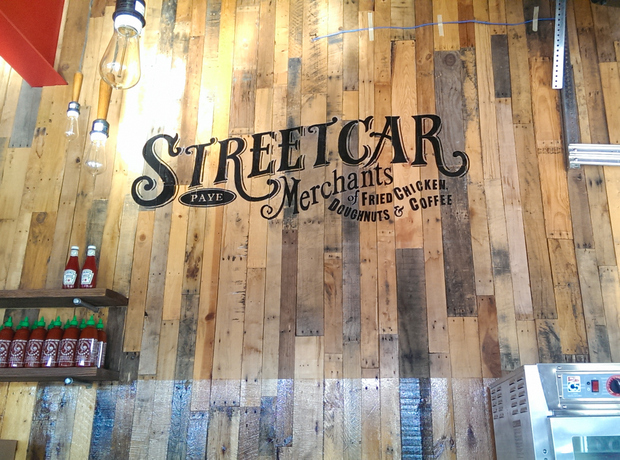 With so many of my favorite things wrapped into one, I could barely contain my excitement and had to visit as soon as possible to get a taste of their offerings. I immediately loved the decor and vibe. 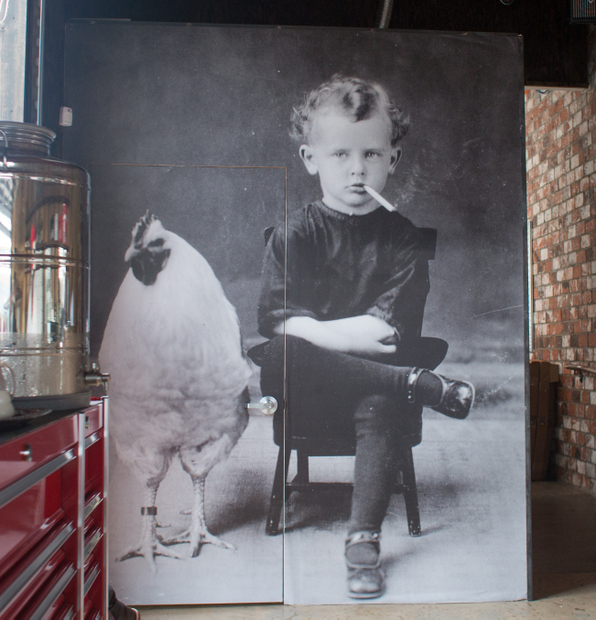 (This leads to the bathroom!)

We initially arrived there at 11 am sharp, which is when they are supposed to start their fried chicken service. But since it’s still in the soft opening stages, they weren’t serving chicken for another hour. So we ordered some donuts, ran some errands, and came back again later for the chicken. My donut round-up is near the end of this post. 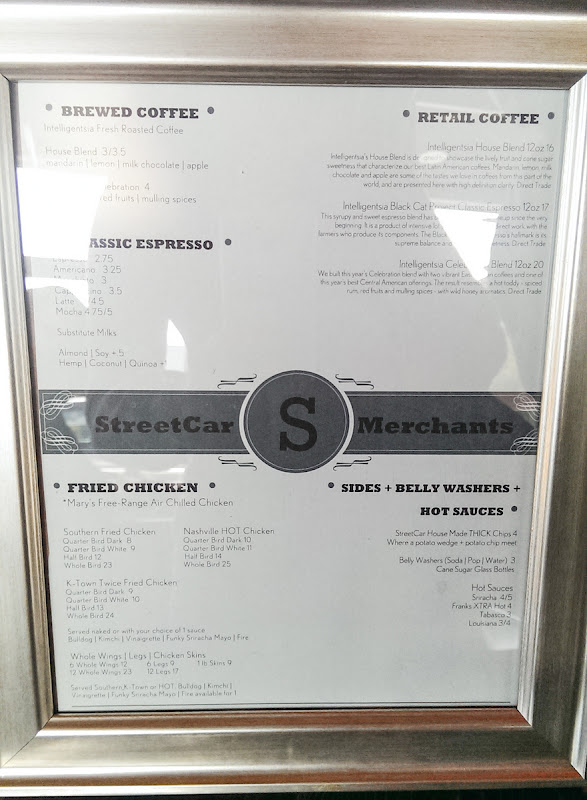 Even though it was just the two of us, we ordered enough for a small army. I really wanted to try all the different styles of fried chicken they were offering. 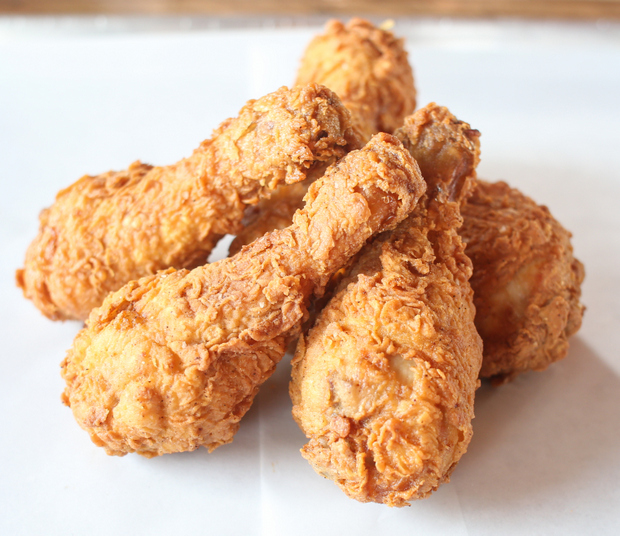 For $9, you can order 6 legs, which is pretty reasonable.

The chicken was juicy, the skin light and crunchy. This was a great version of Southern-style fried chicken and I’d gladly come back here again to get my fix. 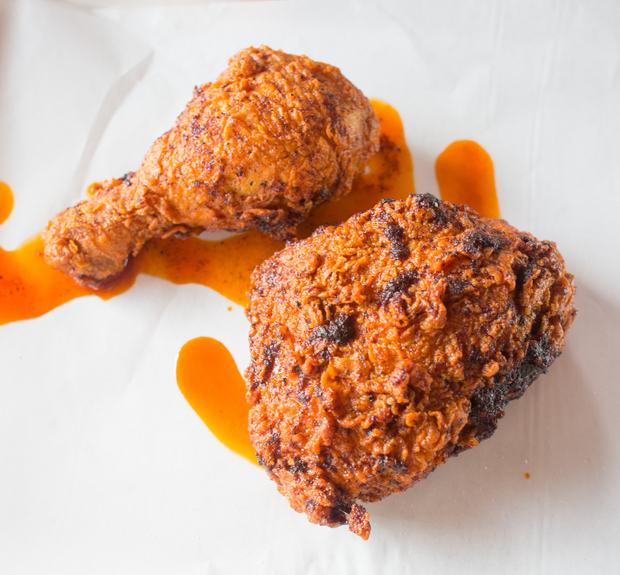 We got a quarter chicken dark meat of Nashville hot chicken. If you recall, I recently experienced the real thing in Nashville at Hattie B’s and have been dreaming about it ever since. Chicken is first deep fried and then brushed with a cayenne paste. Streetcar’s version of the chicken came out a bright red, though the puddles of spicy oil weren’t too pleasant to look at. There is no choice in heat level and the emphasis here is definitely on the word HOT.

Part of what made it so spicy was the hot oil, which compounded the heat from the cayenne. While we enjoyed the chicken, we did feel it was a little oily from the cayenne paste. I’m not quite sure how Hattie B’s manages to reduce the oily feeling in their version. I know they serve the chicken on a piece of bread and perhaps the bread soaks up enough of the oil. I actually tried making Hattie B’s recipe myself recently, and I had the same issue I was experiencing here, where the cayenne mixture was causing the chicken to be a bit oily. The cayenne paste is basically cayenne pepper mixed with lard or hot oil and so when it’s brushed on, the oil soaks underneath the chicken skin.

Update: Per comments below, Streetcar is now serving the chicken with bread to soak up the oils. 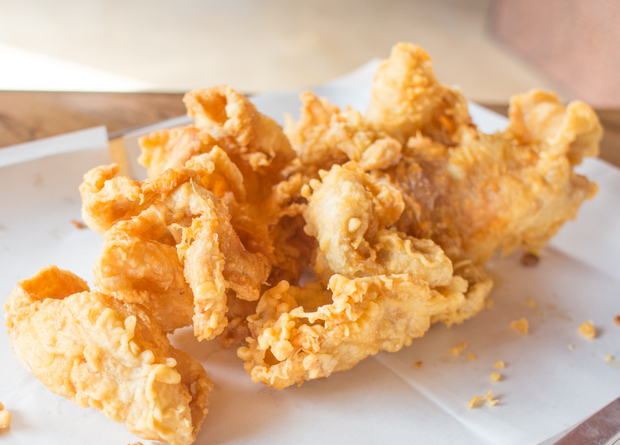 This enormous platter is 1 lb worth of fried chicken skins. I usually prefer baked chicken skins because the skin is baked until it becomes thin and crispy, with most of the fat rendered off. Normally when you fry chicken skins, the fatty chicken skin remains underneath the crunchy batter. However, since these were twice fried, there wasn’t that issue. They were super crunchy and the skin itself was chewy but not overly fatty.

My one issue was that the batter lacked seasoning if you order it naked. Actually, we weren’t asked if we wanted it with sauce, but I later realized that was a choice on the menu, and I wish we had taken advantage of it because the batter was a little too plain. We ended up adding some of the condiments on the table to help flavor the skins. Other than that though, the skins were quite good. And only $9 for a 1 lb of it.

While we were there, we also got a cup of Intellgenstia coffee. I believe this is the first location in San Diego to carry it. I really liked the dispensers for the sugars. And of course the coffee was good too. 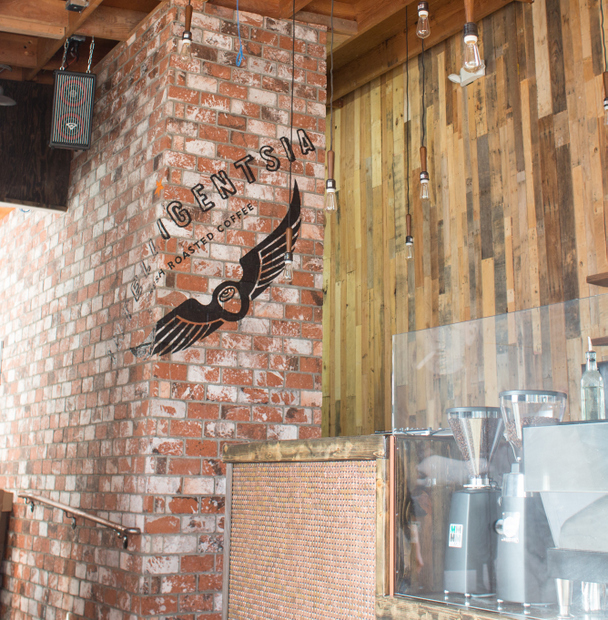 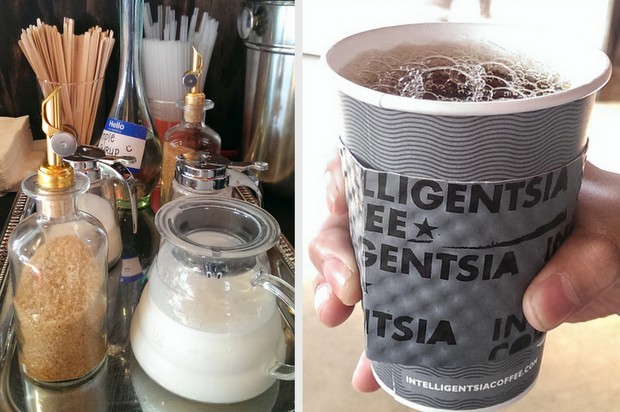 Finally, we also had to try the donuts.

The donuts start with a brioche base, so they are more bready than traditional donuts. I know some people don’t like the denser texture, but I actually really enjoyed it. Even though they start with a brioche bread dough, they were still light enough to feel like donuts. The buttery brioche batter makes these donuts taste richer and feel more gourmet. They also preserve their texture longer too and we were able to enjoy some leftovers the next day. The donuts ranged from $2-4. Here’s what we tried: 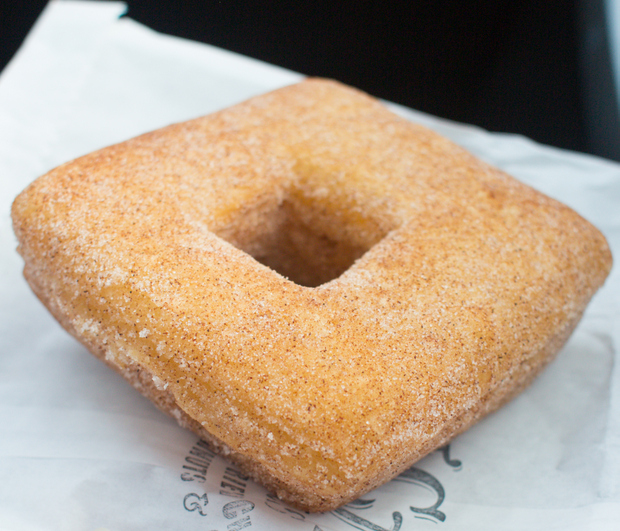 This has been one of their most popular donuts. I don’t know why, but the square shape made me love it even more. 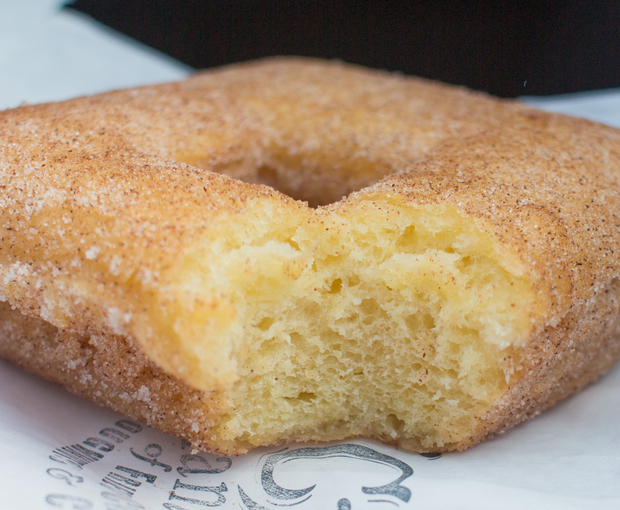 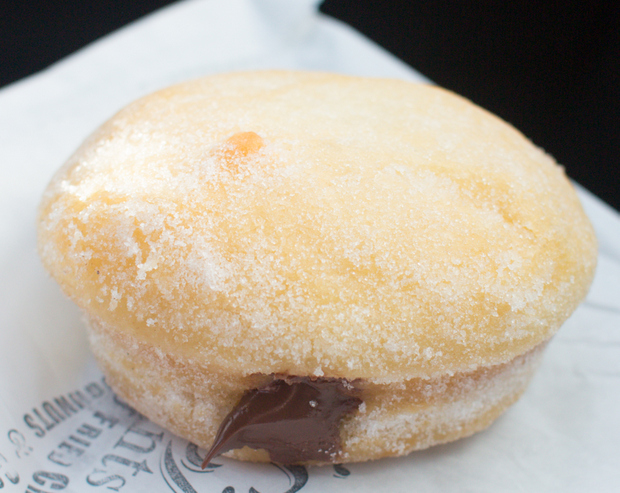 This was my favorite of the three. The lightly sugared mushroom-shaped donut was piped with an almost impossibly large amount of Nutella, enough to satisfy this Nutella-addict. 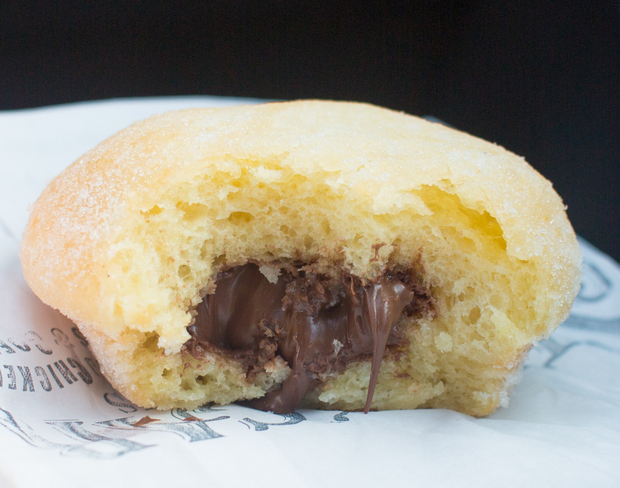 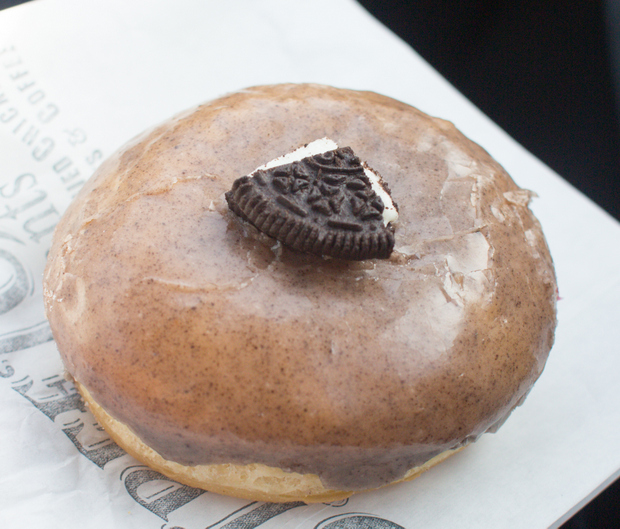 This was the biggest disappointment and the most expensive. Since this was considered one of their fancy donuts, I expected something more. Instead it was a round, unfilled donut, with a cookies and cream frosting, and a quarter piece of Oreo. I was really surprised there wasn’t any filling. 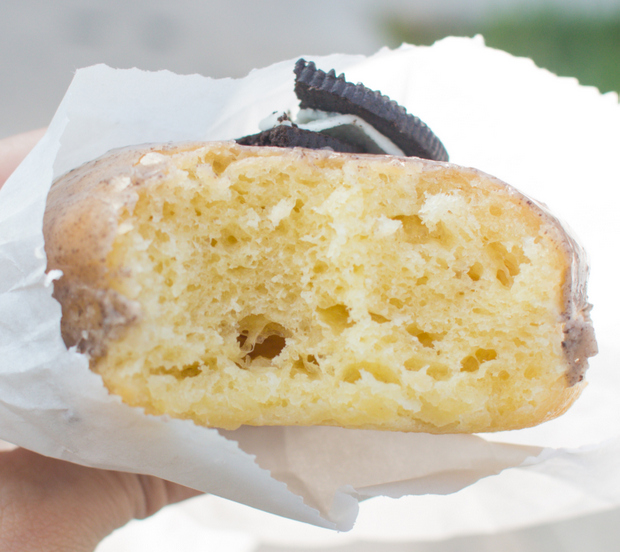 Overall, we had a good time here. The seating is quite limited, so in the future, we might just order food to-go. The restaurant is still working out the kinks and one of the biggest issues is that they haven’t yet figured out how to get the fried chicken out faster. The wait time for our chicken was about 35 minutes. After their grand opening, they plan on adding side dishes and waffles too. I’ll wait a little longer before returning again, but we’ll definitely be back for more fried chicken and donuts. If you don’t like long waits, you can call and place an order to-go as well.

Update: Per comments below, it looks like they will be adding an additional 40 seats to the Sidewalk Cafe which should make dining in a bit easier. We do love the space, so if there is more seating, we’ll definitely choose dining in. 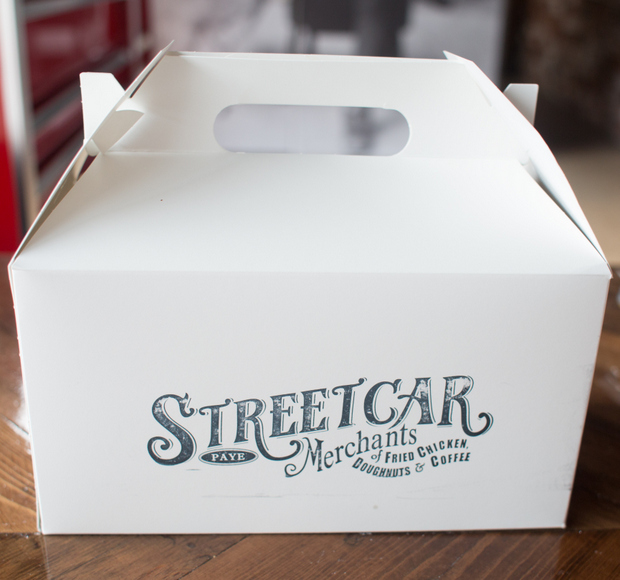