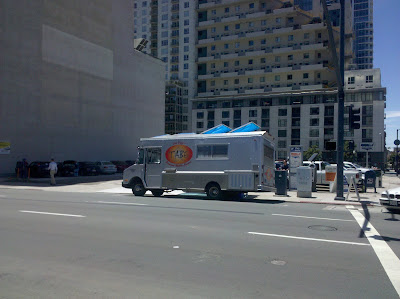 A few weeks ago, I attempted to chase down the Kogi taco truck, but unfortunately did not get a chance to eat the popular tacos.  While food trucks have been all the craze in Los Angeles for quite a while now, it's only recently that craze has made its way to San Diego. I was first alerted of a mobile korean bbq truck similar to Kogi from Darlene of My Burning Kitchen.

Since then, I've wanted to pay Tabe BBQ a visit. None of the taco trucks seemed to be stopped near me, so I thought I'd tried their non-mobile location. Unfortunately, I planned on going on a Sunday, and they are closed on Sundays. So last week I saw on twitter that they would be only a couple of blocks away for me for lunch. What luck! Especially with the Kogi truck disappointment still fresh in my mind. 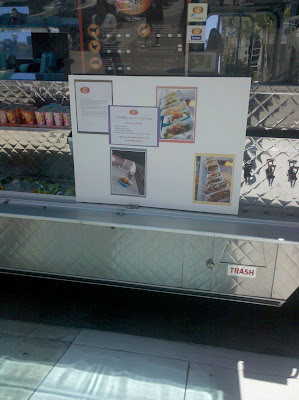 So during lunch, off I went to try the truck. Since I hadn't planned on this visit, all I had on me was my camera phone.

When I got there, there was a decent sized lunch crowd, but nothing like the insane line I had seen at the Kogi truck. I placed my order: a bbq beef taco and a spicy pork taco. 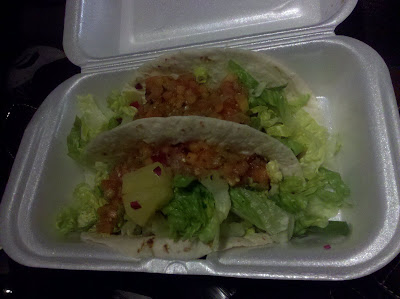 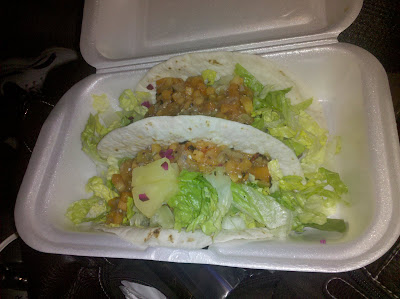 I didnt get great shots of the tacos. Trying to hold my tacos and take pictures with my camera phone is hard… Each taco was topped with salsa and lettuce.  Inside there was a good amount of meat. I've always liked korean bbq marinated meat. The meat was well marinated and tasted wonderful on the taco. It was a bit on the sweet side, but I didn't really mind. I know the concept is pretty simple: it's just a flour tortilla with some korean bbq meat, but the combination is delicious and addicting.  The spicy pork wasn't very spicy. It was more sweet than spicy, but I still enjoyed it.

I liked both tacos and would get them again. Next time I might try a burrito too.They also have some portebello mushroom taco special right now that looked pretty good.