After having a great experience at Hash House, I scoured yelp and food blogs in an attempt to find an equally good spot to take Photographer friend who would be visiting again this past weekend. After hours of searching, I found what I thought would be a perfect spot: Urban Solace.  Hundreds of positive reviews from yelpers, and some good reviews from local food bloggers talking about great service, good food, trendy atmosphere.  I was psyched. The menu looked creative.  I liked the theme: a twist on comfort foods.

I made reservations two days in advance, and I was all set to go.  Boyfriend, Photographer friend and I arrived promptly at 8:15, our reservation slot on Saturday night.  From the outside, the restaurant looks like it will have a homey feel to it.  Of course, once you step inside, it’s a totally different atmosphere.

The restaurant is pretty small, and a bar takes up about half the restaurant.  The decor is more of a wine bar restaurant theme.  There are a few indoor tables, followed by some patio seating.  While we arrived on time for our reservation, our table was not ready.  So we plopped down on some comfy couches and perused the drink and food menu.

I was slightly annoyed that the host didn’t bother to apologize that our table wasn’t ready.  She just told us there we would have to wait 15 minutes or so.  Which would be a proper way to respond if I had just walked in without a reservation, but I expect when I have made on and I’ve arrived on time that usually my table is ready on time, and if it isn’t, there’s usually an explanation or an apology as to why they are running late.  And really, I doubt I would have remembered this, if the rest of the night had gone better. But as you can guess by my title– it didn’t.

After waiting for fifteen minutes, the host finally came over to explain that they were running behind schedule due to some other people arriving late for their reservations, etc, and that it would be a few more moments.  A few minutes later, we were seated.

Both Boyfriend and Photographer Friend like really sweet alcoholic drinks, aka “girly drinks.”  Since it was just the two of them and me, they felt comfortable ordering the girly drinks on the menu.  Photographer friend had a Pink Lemonade.  Boyfriend had an Urban Fizz.  I opted for a non-alcoholic mango lemonade. 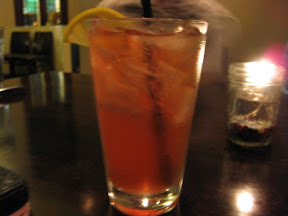 The pink lemonade.  The drink was pretty strong, but still sweet and smooth tasting. 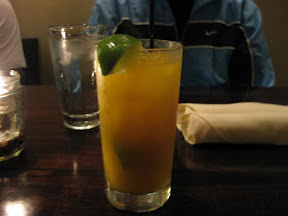 The urban fizz.  Also very strong, but still managed to be sweet. 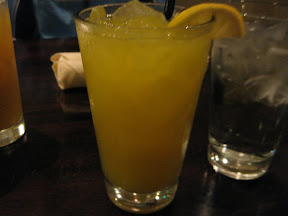 Mango lemonade.  Not as sweet as normal lemonade.  Subtle taste of mango.

We decided to start off with an appetizer of their famous cheese biscuits with orange butter. The biscuits took forever to arrive…We were practically done with the drinks before they arrived. 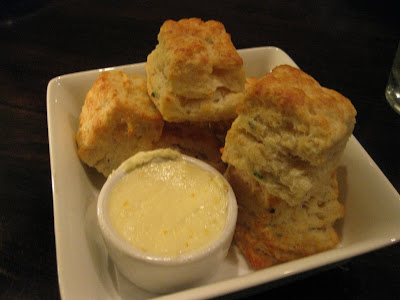 The taste was just okay.  The biscuits weren’t very flavorful.  I found myself missing the cheddar biscuits at Red Lobster.  There was a slight hint of cheese taste to these biscuits, but other than that they were pretty flavorless and kind of dry.  I ended up putting butter on mine because I was craving for some sort of flavor, and I never put butter on my biscuits.  (I’m one of those people who like to eat things without adding sauce.  No butter on bread, no syrup on pancakes, etc.)  The butter was pretty tasty with the orange flavor. But overall, the biscuits were disappointing and I would not order them again.

So I couldn’t make up my mind on my main entree. I was torn between the duckaroni (macaroni cheese made with blue cheese and mixed with duck pieces) and the House burger.  I asked the waiter for recommendations and he recommended both. He said the duckaroni was a signature dish, but the burger was one of the best burgers he’s ever had.  Finally, I decided on getting the burger and then a side order of the duckaroni. 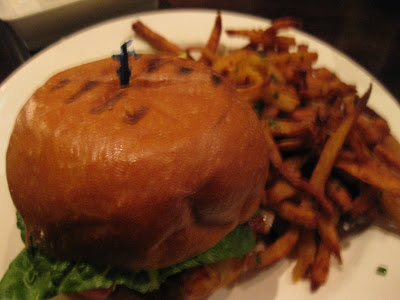 The House burger comes with sweet potato fries.  I found the fries to be pretty good.  They were crispy and well seasoned.  I worried they would be soggy.  Unfortunately, the fries were the only thing I enjoyed on this plate.  The burger was served on this enormous bun.  As you can see, the bun was so big, it covered the thick burger patty and stuff put on the patty.  I don’t like burger buns that are so big, and I don’t think I’ve ever seen a burger with so much bun.  Also, the bun is sweet!  A burger on a sweet bun?  The tastes just didn’t work well together.  And the patty which I ordered cooked medium was burned.  Burned and charred.  All I could taste was char.  I took about three bites before giving up.  All three bites were sweet bun with char.  That’s all I tasted.  I would have to say, one of the worst burgers I’ve ever had. 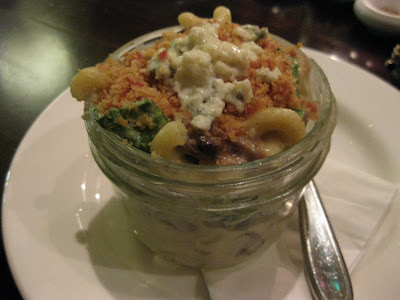 Here is the side order of duckaroni.  I thought this side order was a bit too small.  A full entree version of this dish costs about $14.  And the side costs about $7.  So I expected a portion that was equivalent.  This was a lot smaller.  The taste was pretty good though, and I wish I had just gotten the duckaroni and not the burger.  The blue cheese mix was very rich, but yummy and the duck complemented the noodles and sauce well.  I didn’t really feel like I was eating a macaroni and cheese though.  I felt like I was eating a pasta dish with duck and a rich cream sauce. 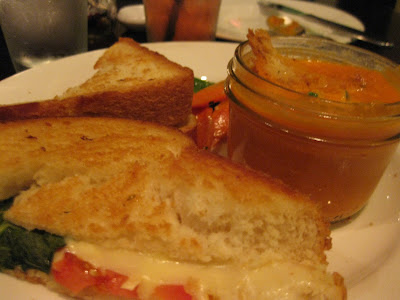 Photographer Friend had the grilled cheese and tomato fennel soup.  He said it was pretty good. 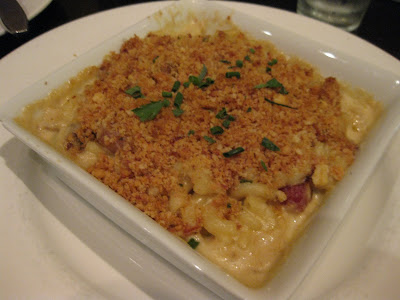 Boyfriend ordered the mac n cheese with caramelized bacon.  This dish was pretty tasty.  I liked the bacon in it.

So perhaps if this had been it, I could have forgiven them for the horrible burger and the slow arrival of the tasteless biscuits.  I mean, Urban Solace did serve some tasty dishes and some good drinks. But remember that waiter who recommended the horrible burger to me to begin with? Well I never spoke to him again that night.  It wasn’t that he left or he was on break.  He just never came back to our table.

Towards the end of the meal, I noticed my glass of water was emtpy.  This is something that is pretty rare because I don’t drink a lot of liquids when I’m eating.  Usually when I’m with my siblings, they always take my water after they finish theirs because I always have more than half a glass left.  Well, for once my glass was empty, probably because I had nothing to eat after the sweet potato fries and small portion of duckaroni.  At that point, I noticed that my friend’s glass was empty too.  And it had been empty for a while.  It was so empty that even the frost was gone from the glass and the glass looked completely dry.

So we waited around some more without anyone bothering to come and check on us.  The whole time I was thinking that this was a very big waste of my time and hours of my life I will not ever get back.  We waited and watched while our waiter showered attention to the table next to us who had ordered an expensive bottle of wine and other expensive things.  We waited until finally some new waiter came to clear our plates and asked if we wanted dessert.  I shook my head no.  I originally had wanted to try desserts, but by this point I just didn’t want to waste another minute of my life in the restaurant.

So overall, very disappointing.  I felt bad for wasting my friend’s time on this restaurant.  While there were some interesting food dishes, the long wait in between dishes, horrible service, bad burger made it a bad experience.  Also, my Photographer friend attempted to go to the bathroom. Apparently there is only one bathroom for the whole restaurant.  It took him four attempts before he could use the restroom.