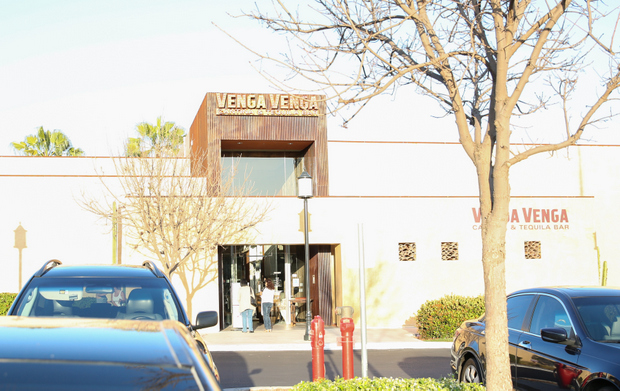 Venga Venga recently launched a Destination menu, where every 6 months the restaurant menu will offer dishes inspired by a different region of Mexico. From March through September they are featuring dishes inspired by the flavors of Guadalajara. We were invited in last month to check out some of these special menu dishes.

This was our first visit to this restaurant. The modern Mexican eatery has a very large space, with several dining areas. I fell in love with the outside courtyard and requested to sit there. 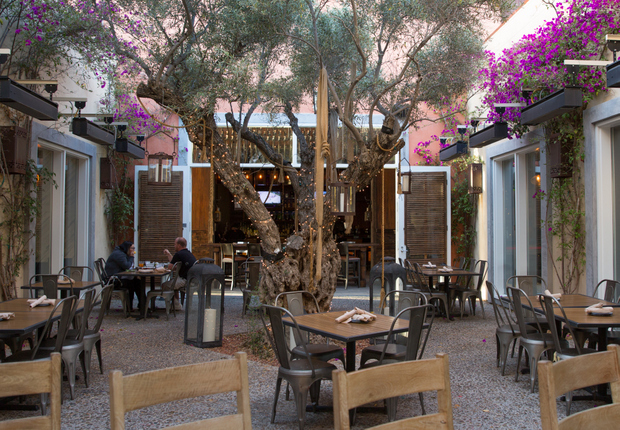 We started our meal with some warm chips and salsa. I really enjoyed the subtle smoky flavor in the salsa. 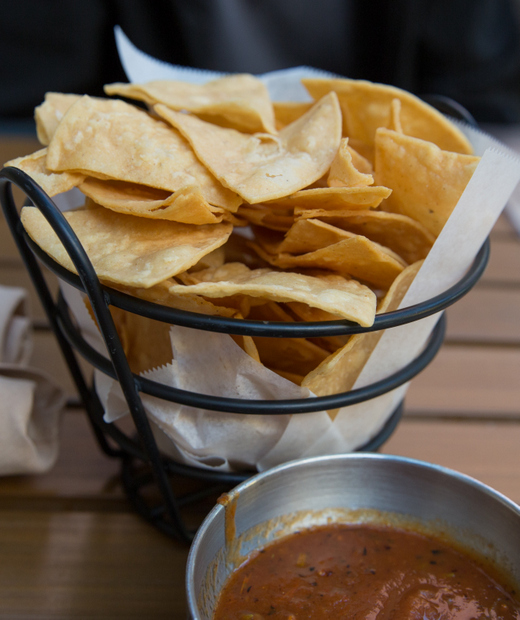 Pepino and Mango Margarita on the Rocks 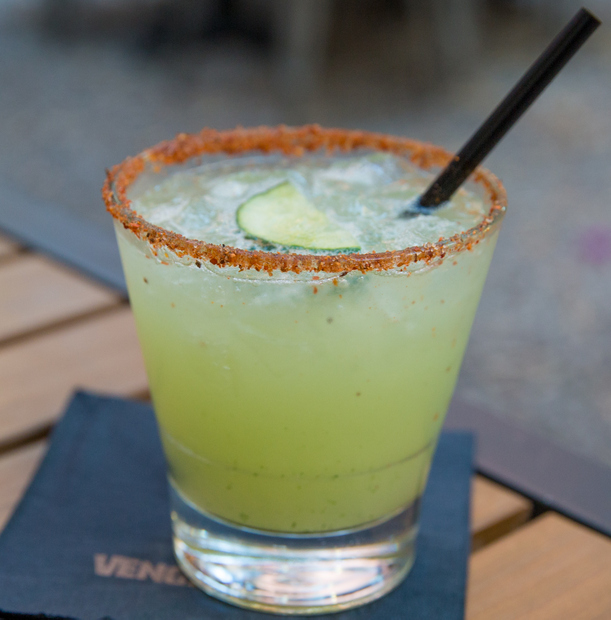 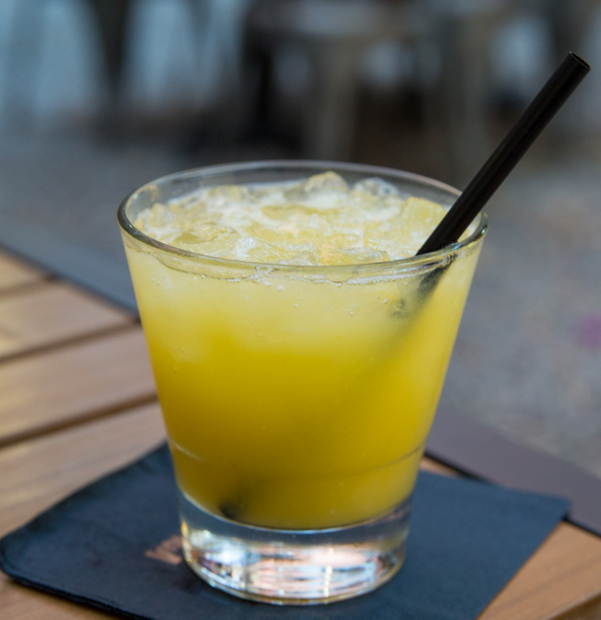 Because the restaurant offers a full tequila bar, we had to try out a few cocktails. Of the two, I preferred the pepino. It carried a little heat and had a clean finish. 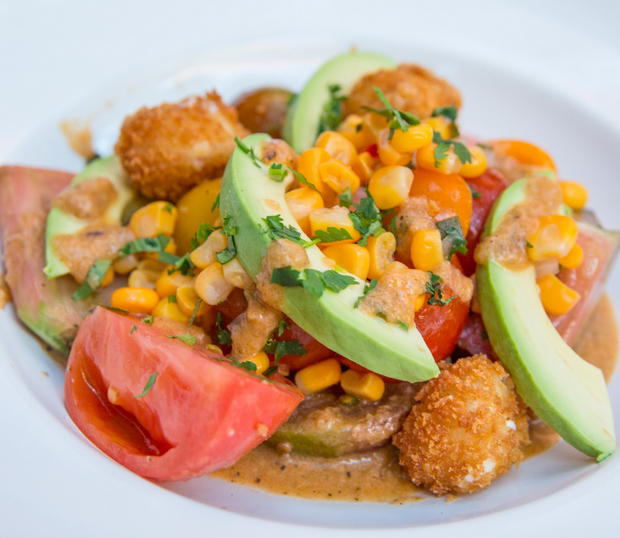 I’m not too much of a salad person so I didn’t much care for this. Mr. K loves tomatoes, so he liked the variety and sweetness of the fresh heirloom slices. 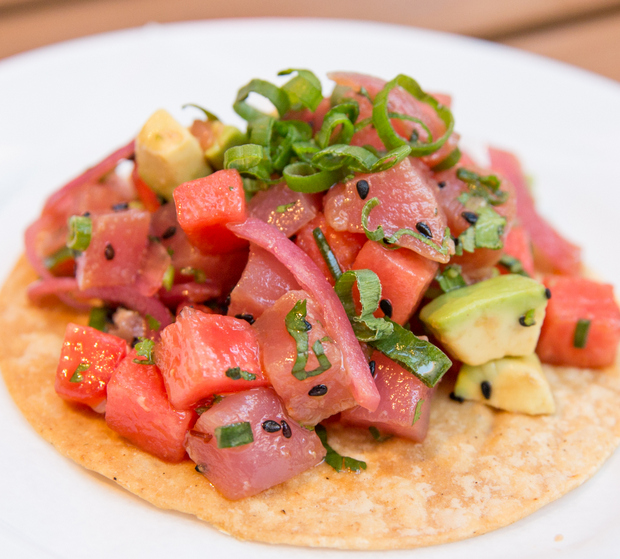 Raw tuna cubes are mixed with watermelon and seasoned with a sesame vinaigrette. The watermelon adds a simple twist that is light and refreshing. These crispy rolled tacos were filled with braised beef. They didn’t quite stand out for me and Mr. K ended up eating most of this dish. 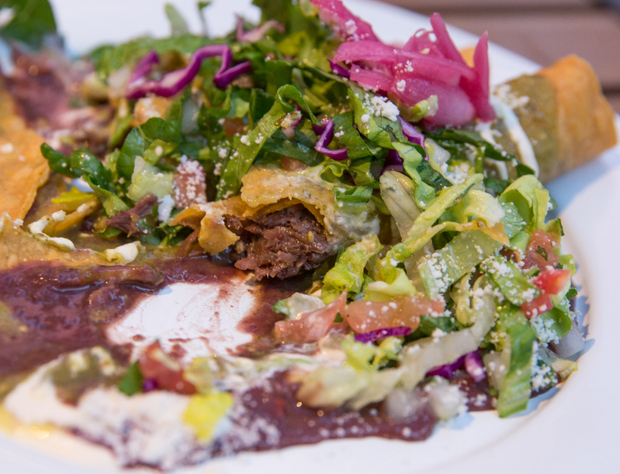 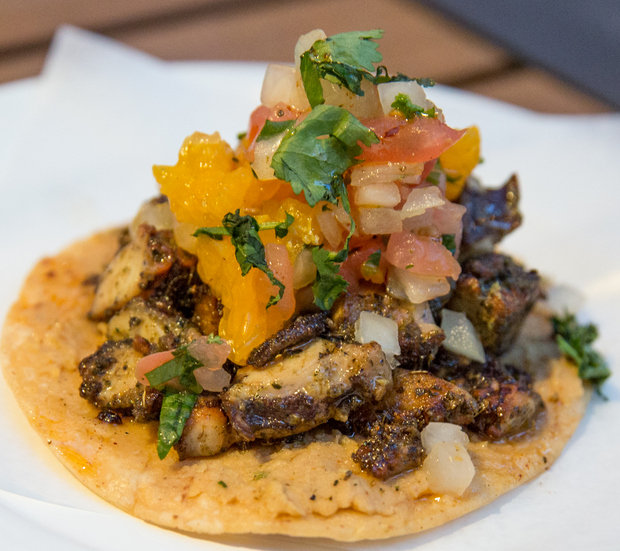 When I had been perusing the menu, this was the dish I was most looking forward to and it did not disappoint. Warm grilled octopus, oregano pesto, refried garbanzo beans, and a thyme citrus chile de arbol sauce. The oregano pesto had an earthy flavor and the thyme citrus chili added just a touch of heat. 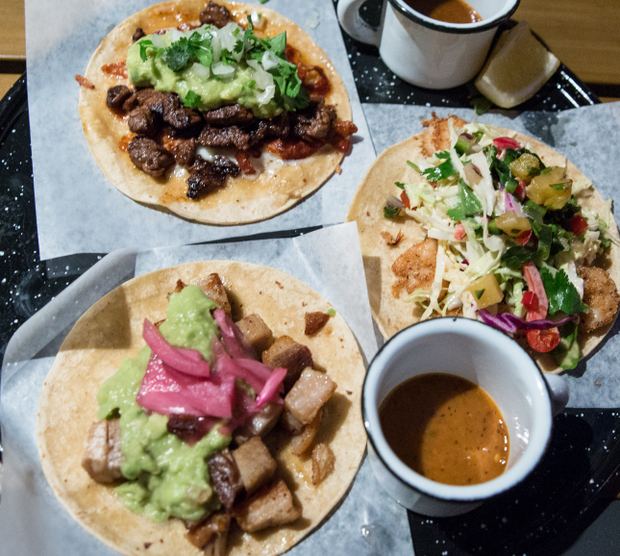 We were getting pretty stuffed by this point, but the restaurant also served us a trio of street tacos to sample. Of the three, my favorite was the crispy shrimp. The shrimp were fried but felt light and crispy . 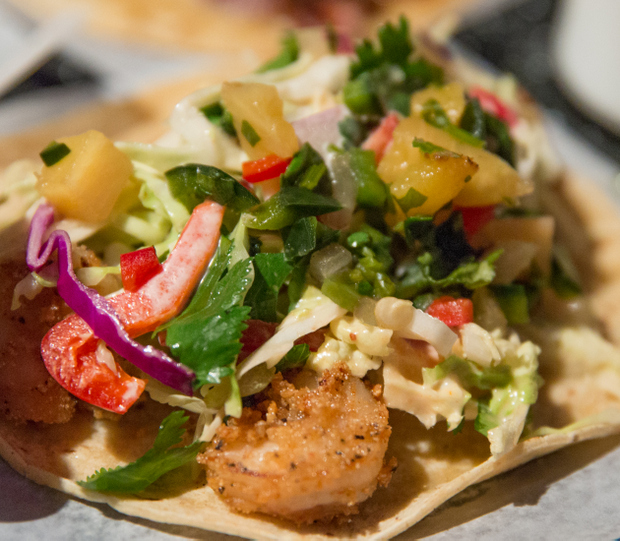 The hanger steak was sitting a bed of crispy cheese (the cheese is cooked directly on the griddle until it becomes crispy). 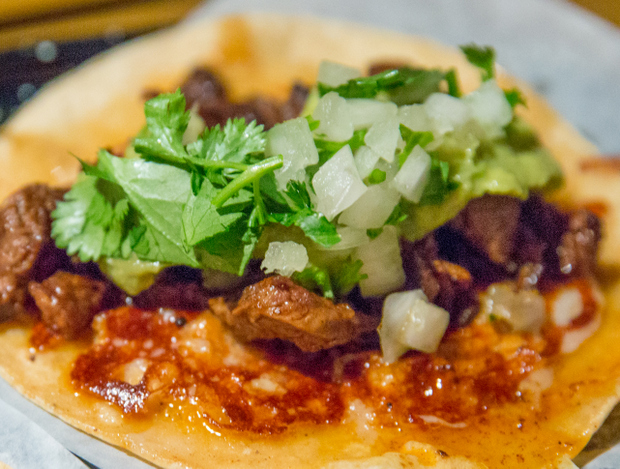 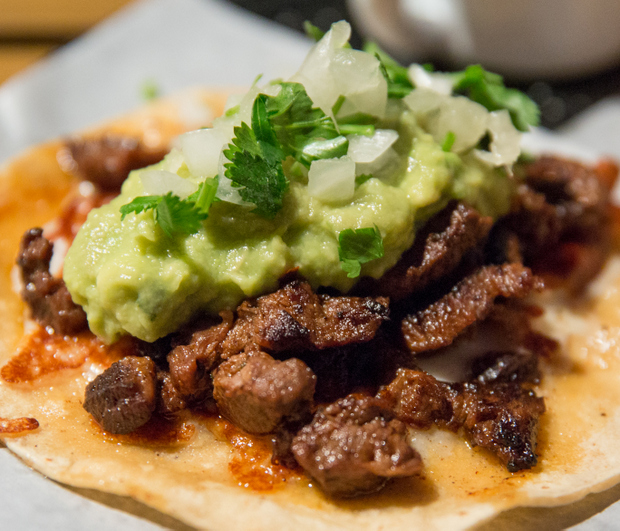 The pork chicharron, unlike the usual crispy version, was more like a braised pork belly. It was quite flavorful though. 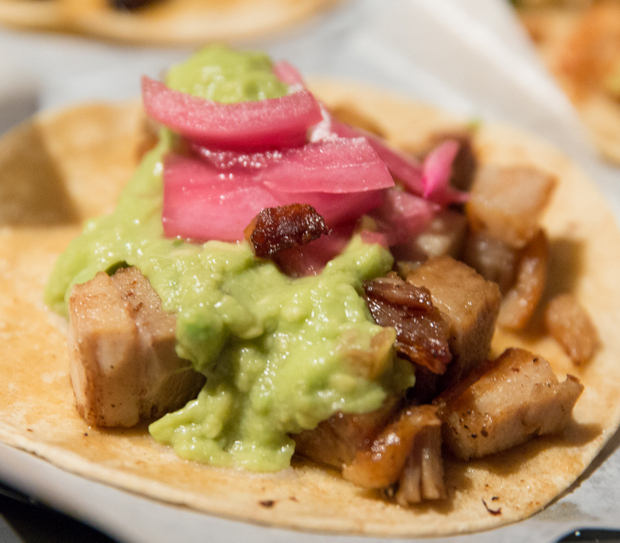 We also tried a trio of sides. 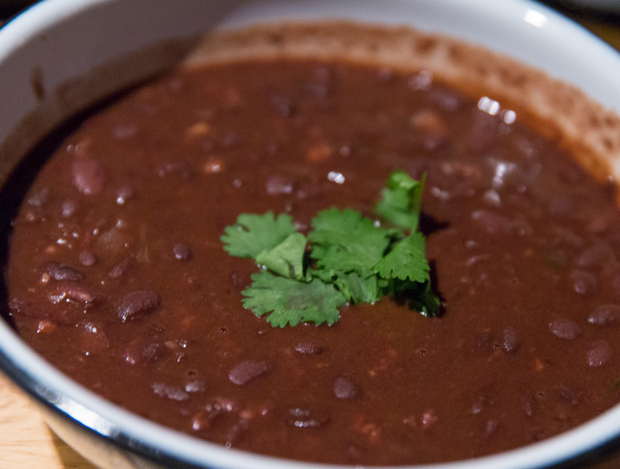 The beans were stewed in a sauce that was reminiscent of BBQ sauce.  Mr. K really loved these. I didn’t care for them as much. 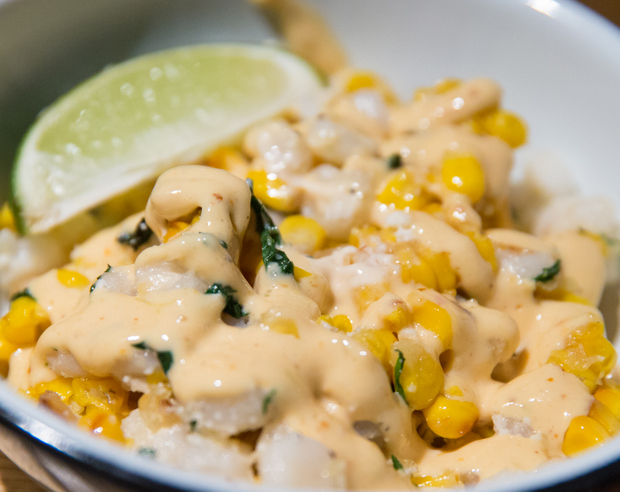 This Mexican snack is usually one of my favorites. Venga Venga’s version included a lot of hominy. I wished there was more corn in the dish. 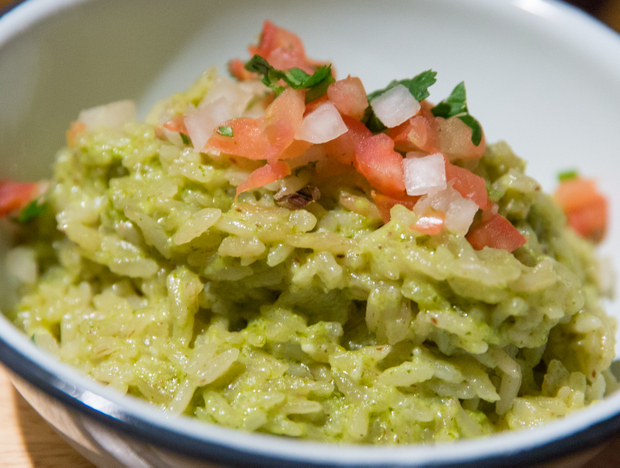 From the green spring color, I was expecting a lighter dish, but this was actually the opposite. Cheesy, rich, and risotto-like. It was quite delicious. 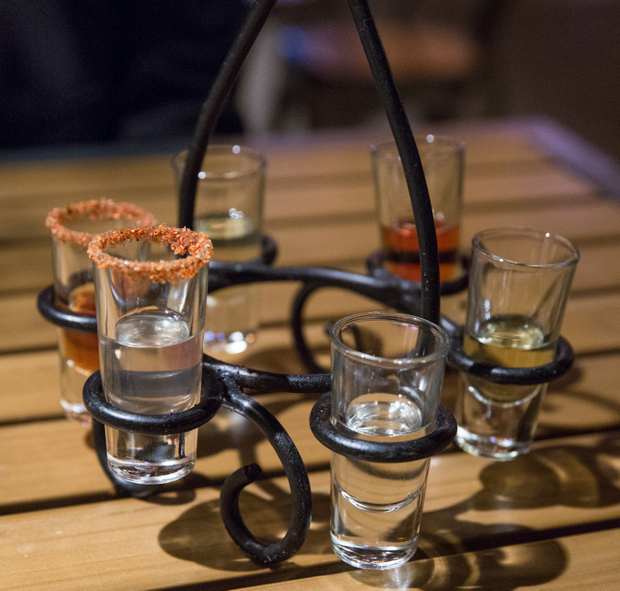 The restaurant is known for their tequilas. The restaurant has a full tequila bar and also makes their own infused tequilas as well. We were treated to a sample of these. We ended the night sampling their two desserts. First was the Tres Leches, a sponge cake soaked in three kinds of milk (whole milk, evaporated, and condensed). I don’t enjoy this type of cake because I don’t like my food soaked or soggy. Mr. K, though, loves tres leches cake and he really enjoyed the version here. 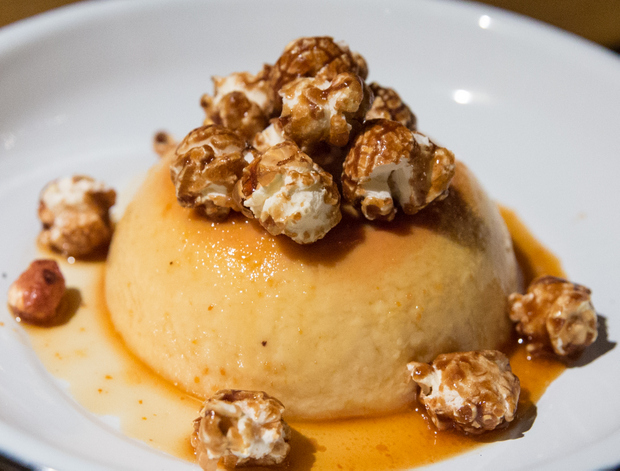 This dessert was much more my style. It was a playful spin on a classic.. I especially liked the nostalgia-like feeling I got from tasting caramelized popcorn flavor in the flan itself.

Overall, we had a good time here. I really enjoy the idea of a Destination menu and would definitely be curious to come in again when they move onto their next region. While I know the dishes may not all be like the traditional dishes you would taste in these regions, it’s still nice to see the restaurant’s creativity and the dishes inspired by those flavors.

You can view the current menu here.

Please note, as discussed above, I was invited here to check out the new menu and our meal was complimentary. My opinions expressed in this post are my own.