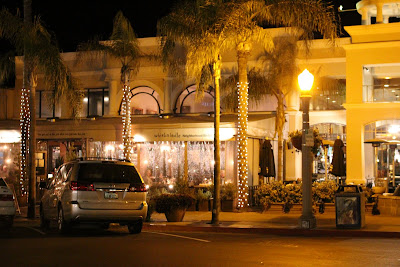 The other night, BF and I went to check out Whisknladle, which I have heard great things about. Whisknladle is one of the many farm to table style restaurants that have popped up in the last few years, using fresh local ingredients and making almost everything in-house, from curing their own meat to churning their own ice cream.

Their menu offers some unique items that you won’t find elsewhere, which is what really appealed to me. Since they emphasize using fresh ingredients, their menu changes constantly as well.

The restaurant is small, with most of the dining area set in an outdoor enclosed patio space. Luckily the heaters keep the dining patio quite warm. From the dining space, you can peer into the clear glass kitchen window. 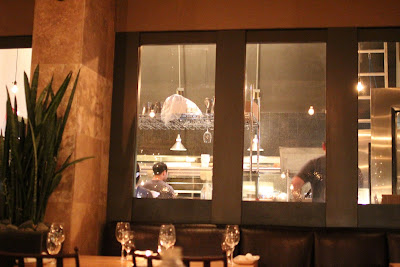 The tables resemble farmhouse tables, with their long wooden rectangle surfaces. In addition, we were given a jar of water for the table. 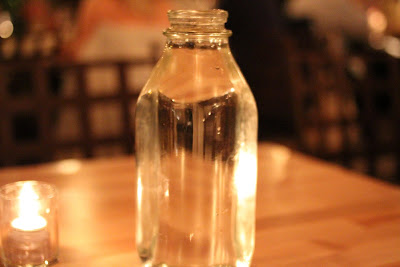 We were very lucky to have a wonderful server that night, Jessica, who told us that she was a fan of the restaurant before deciding to work here. I’m a firm believer that having a good server can really change your restaurant experience. Her love of this restaurant really showed and played a big part in our great dining experience.

Their menu is written on a single piece of paper and there is no division between appetizers, soups, salads and main courses. Without the confines of labels, you can order and try quite a few different dishes which was exactly what I wanted to do. 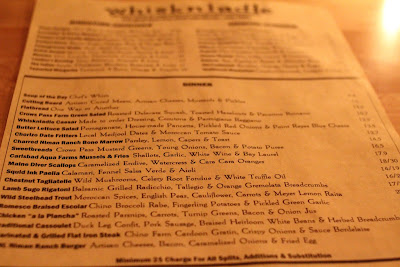 After discussing the menu and getting some recommendations, we decided to try five things off the menu. The portions, despite them being appetizer-sized, were quite big for the most part, and we probably could have done with ordering just three items.

First we decided to indulge in some cocktails. I chose a passionfruit mimosa. I couldn’t really taste the sourness of the passionfruit, but it was a nice sweet drink. 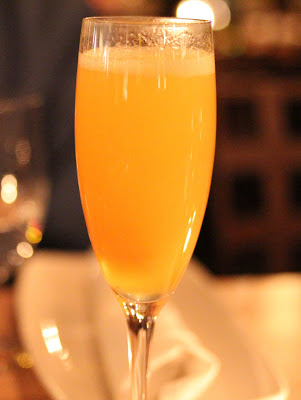 On yelp, we had read good things about the sangrias so BF ordered a glass of red sangria. The sangria was alright. I wish there were more fruit flavors present as the only fruit present were oranges. 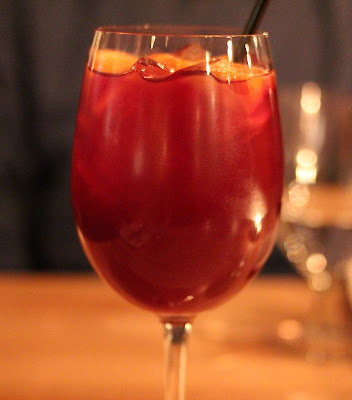 We were then given some sour dough  bread and butter. The bread is one of the few things not made in-house. Instead, the bread comes from Bread & Cie, my favorite French bakery in San Diego. 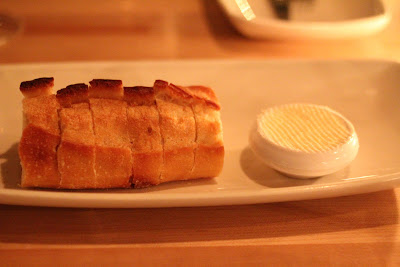 Soon after, our food started to come. First up was the cutting board, which is a selection of cured meats, cheese, olives, pickles. I don’t remember the names of most of them, but I liked sampling everything and I love the french baguette it was served with. 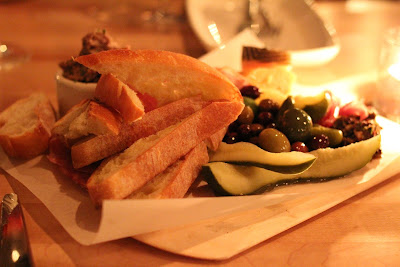 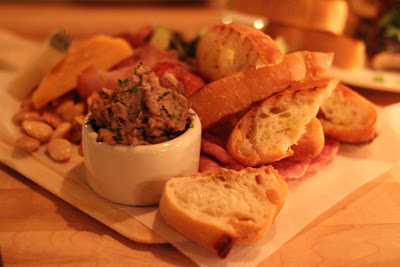 Next we got our date churizo fritters. I had read really good reviews about these, but I hesitated about ordering them since BF doesn’t like dates. However, our server Jessica told us it was her favorite dish at Whisknladle so we decided to try it.

When she had been describing the dish to us, she told us that it was this perfect combination of flavors, salty, spicy, sweet, with the sauce giving it some acidity (I’m paraphrasing here of course) Her description was of course mouthwatering, but I also didn’t really believe it. Until they came and I took one bite. And they were exactly how she had described.

The deep fried morsel is crispy on the outside and has a salty spicy ground chorizo meat inside. On the bottom is a date which adds a little sweetness to the chorizo. The chorizo date is served with a side of tomato sauce which adds some tartness. The flavors all compliment each other perfectly and create a perfect bite (well each one is more like two bites). These unassuming little bites may not look like much, but they pack an amazing taste. 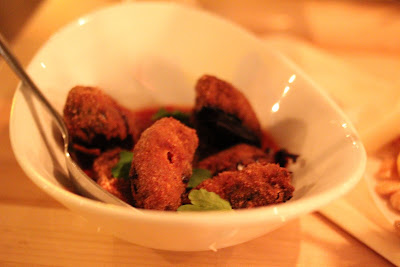 This was by far my favorite dish of the night and one I will definitely order again. Bf loved the dish just as much as I did.

Next came our bone marrow, which was served with thick slices of toast. I’ve seen many episodes of Iron Chef and seen Chef Batali serve bone marrow on several occassions. His descriptions have always been mouthwatering and I have been very curious as to what bone marrow tastes like. 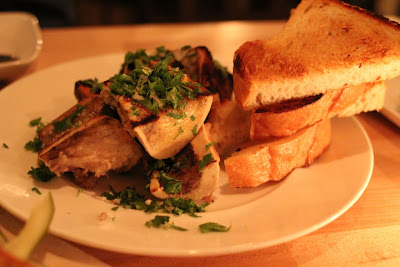 By this time, we were getting full, but there was more food to come. We ordered a squid ink paella. This dish ended up being my least favorite of the night. The rice didn’t resemble paella at all as it was quite dry. 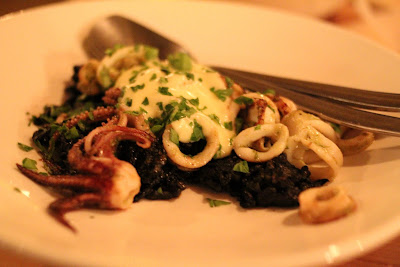 Finally, our last dish was the Niman Ranch burger.  Priced at $17.80, I thought this was a little pricey for a burger, especially since it seemed all the other prices were more reasonable.

We were pretty full by the time our burger arrived, so we only took a few bites before boxing the rest up. We almost can canceled the burger, but I’m glad we didn’t. 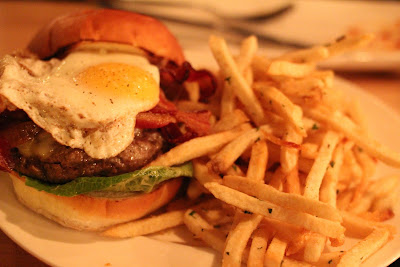 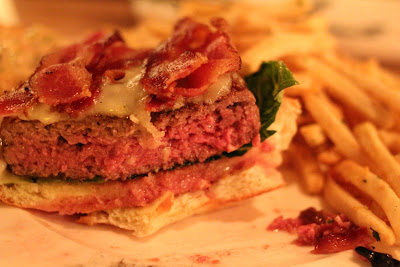 The burger came with a 1/2 pound thick juicy patty, cooked to a perfect medium rare. It was oozing with juice and flavor. It was topped with slices of crispy bacon, cheese, a fried egg, and a toasted bun with dressing. It was slightly on the salty side, but this was one good burger. I love a good burger, especially one with a thick juicy patty. This one really satisfied my criteria perfectly. I still think it was a little overpriced though. The burger was accompanied with some fries which I would have liked to be a little crisper.

We spent some time looking over a dessert menu, but BF had no room and I didn’t want to eat a whole dessert by myself. Regretfully we said no to dessert. I got a kick out of the top of the dessert menu, as I never knew that desserts is stressed spelled backwards! I find this discovery quite amusing not only because they are semordnilaps (yes I had to look that one up), but because they are so related as well. BF didn’t seem to get why this was so amazing. 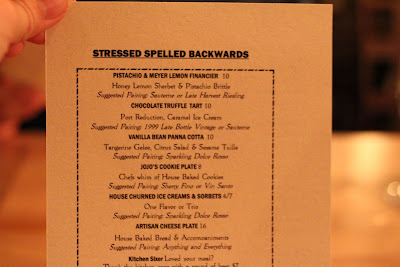 Then to our surprise, Jessica brought us over a plate of cookies, one of the desserts on the menu. It was as if she had read my mind. She said it was a little welcome gift and brought a box so that we could take them on the road. 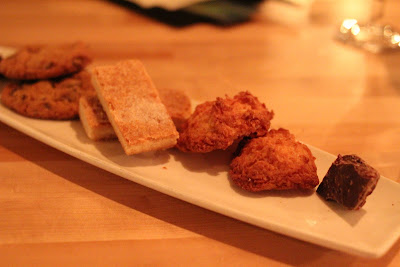 We were very touched by her gesture as well with her great attentive service the whole night. She was constantly checking up on us and filling up our water. We had been given a jar of water at the beginning of the meal, but I never once had to fill my own glass since she was always there to pour for me.

BF and I both left really happy. We enjoyed the food and we really enjoyed the service. We’ll be back to try some more things on the menu next time.