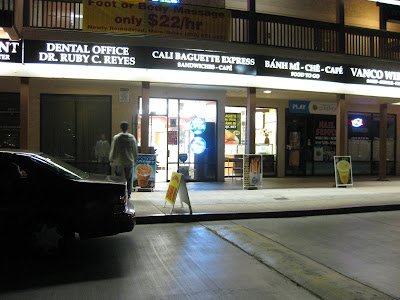 Cali Baguette Express has been on my to-do list for quite a while.  I first read about it on CAB Cooks.  I recently thought about it again after seeing a post from foodies: a southern california food blog.

I’m not sure why, but I imagined a store with a drive thru, so I was surprised to find it in the middle of one of those plazas where all the storefronts look the same and the businesses have the same letterheads displaying their names.

Once inside, we were greeted warmly by the owner. I was hoping for some eggrolls, but I saw the display case was empty. Unfortunately, we had come too late for eggrolls. So instead, we opted to order some bahn mi sandwiches.

BF got #13, which was spicy beef. I got a #6, which was bbq pork. The sandwiches were freshly made.

I was surprised to find my bread still hot and crispy. I love fresh french bread. There was a decent amount of bbq pork in my sandwich, though I could have used more herbs and pickled vegetables. I wasn’t as big of a fan of the beef. There was something in the sauce the beef was marinated in that I didn’t particularly like.

Here is the pork: 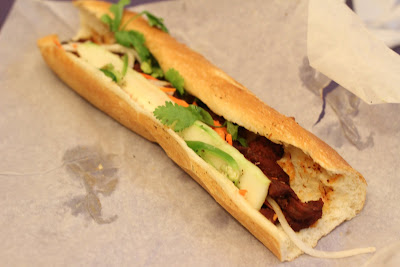 Here is the beef: 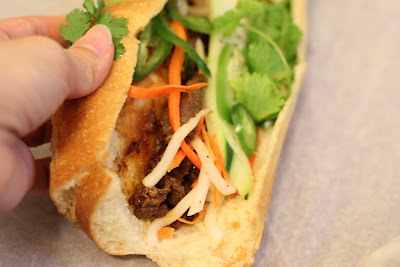 The sandwiches were pretty good.  I’d come back here again, though next time I’m going to come earlier so I can try out the eggrolls.