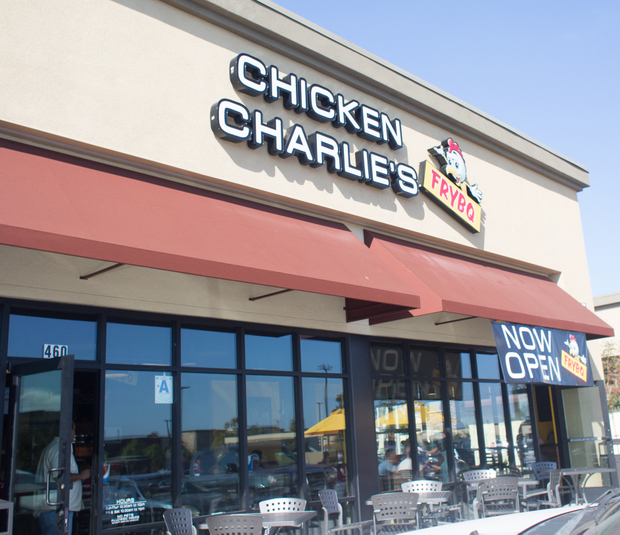 As you might imagine, the lines were quite long during the weekend. Chicken Charlie’s has always been the first vendor I visit every year when I attend the fair, so I was definitely curious to see what their restaurant menu would be like. 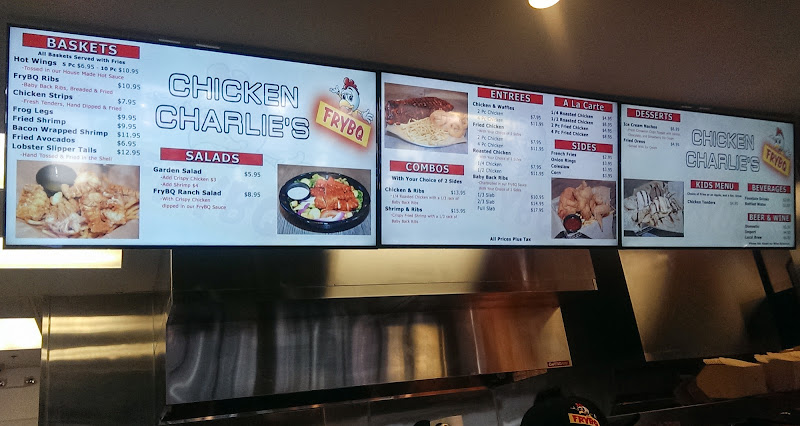 The menu, surprisingly, only offers a fraction of the deep fried fair foods. As its name suggests, the menu is a mix of BBQ and fried, with items like baby back ribs, rotisserie and fried chicken, etc. It’s my understanding that this restaurant will also serve up new fair food ideas before they hit the fair in the summer.  The restaurant also has several beers on tap.

We grabbed a seat at one of the counters, and I loved that inside the glass counter was charcoal, running with the BBQ theme. 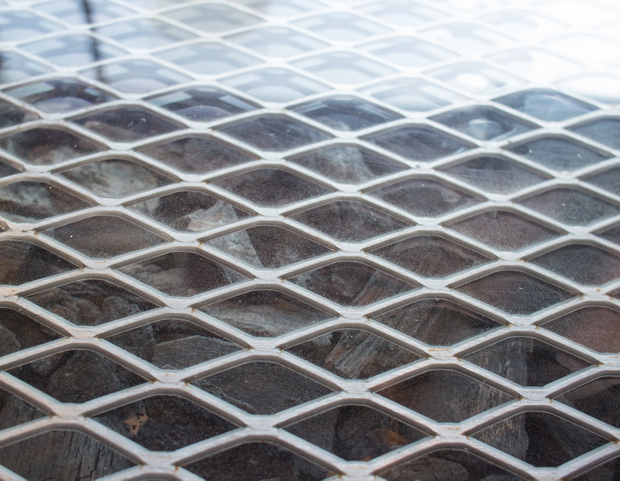 Despite the hard working staff, the food took awhile to arrive–more than half an hour. Also they ran out of our original order (baby back ribs and chicken) and we had to instead change it to deep fried ribs and chicken. 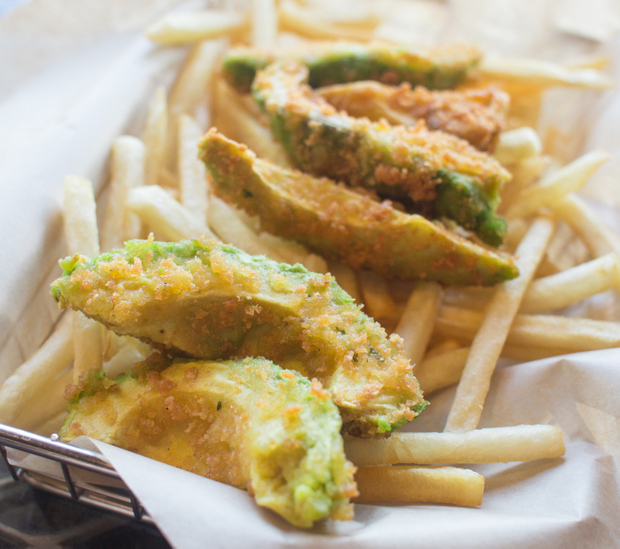 This is actually the very first item I ever ate at Chicken Charlie’s at the fair and I’ve been in love with fried avocados ever since. The price on the menu is the same as at the fair, which had me a little concerned, but luckily the portions were bigger at the restaurant, and the avocados were served on a bed of fries. The fries here are surprisingly bland and extremely starchy. Given how well they execute other fried items, I don’t quite understand why the fries are subpar.

The avocados though, were as good as I remembered. Lightly breaded and fried until golden. They taste best with some ranch dipping sauce. 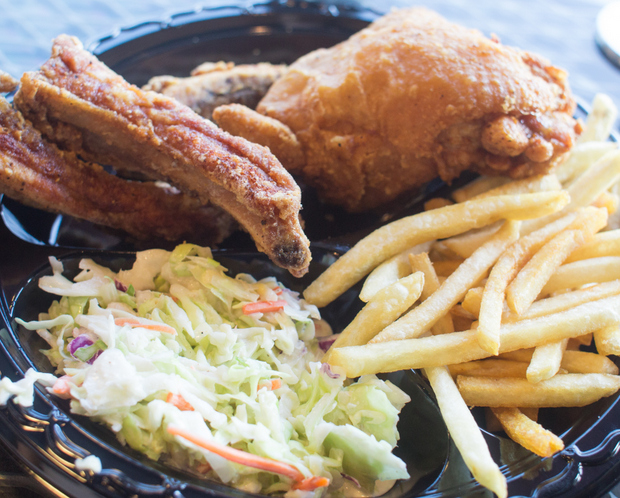 We were trying to be a little healthier by ordering the baby back ribs, but they were extremely popular and completely out by the time it came to cook our order. It was interesting to try fried ribs, something I’ve never had before. The ribs were actually pretty good this way. The fried cooking method added a crispiness to the edges and the inside meat was still moist and came off the bone easily. 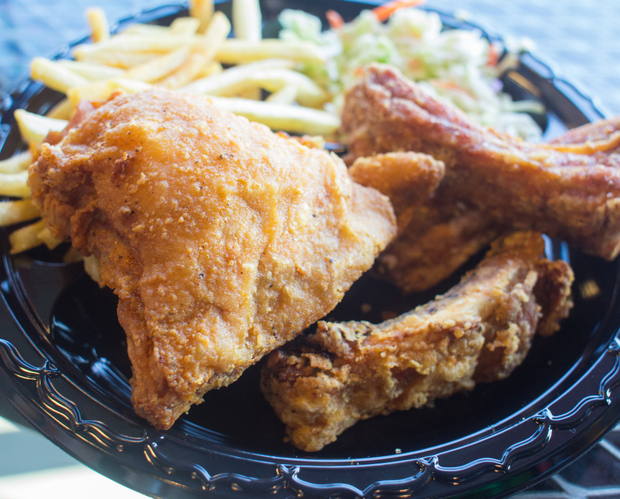 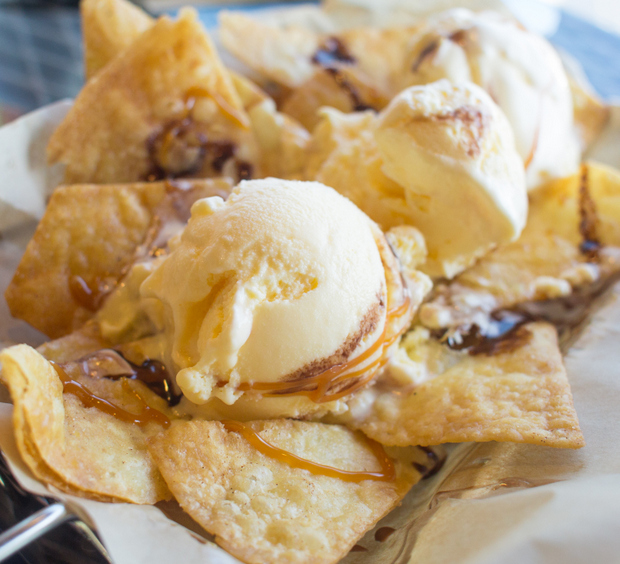 We couldn’t leave without trying one of their fried dessert concoctions. Since we’ve already had the fried Oreos in the past, we decided to try the ice cream nachos. It comes with three scoops of ice cream (choice of vanilla, chocolate and strawberry) and a plate of cinnamon and sugar coated fried tortilla chips. This was pretty good, though the presentation was bit sloppy. I had Mr. K fix the ice cream scoops for a nicer photo.

Overall, we had a decent first visit. Things were a little bumpy, but I’m sure they should be able to iron out the kinks after they’ve settled in. I’m excited that Chicken Charlie’s has a brick and mortar shop so that I don’t have to wait until the San Diego County Fair to experience some of my favorite Fair food creations. I’m also interested in trying the baby back ribs and roasted chicken, which unfortunately wasn’t available when we went, so we’ll definitely have to come again. It was great to see Charlie Boghosian walking around and checking in on everyone and we did get to briefly speak to him.