The first part of my dining at SeaWorld adventures can be found here.  As I stated in my first post, after not having gone to Sea World in many years, Boyfriend and I recently went to visit.  We discovered that they now offer this unlimited dining plan for about $30.  About eight of the dining establishments within SeaWorld participate, and you are given this wrist band, which entitles you to one entree, drink, and dessert or side dish every time you go through the line.  It’s a pretty good deal considering SeaWorld food is pretty expensive and they don’t let you bring your own food.

Boyfriend and I were excited to try the unlimited dining and once we got the wrists bands, the rest of our trip was trying to try as many dining places as possible.  On our first trip, we only tried about half of them.  Since we had unlimited trips to SeaWorld for the rest of the year, we went back again to try the other places we hadn’t eaten at a few weeks later.  So here is the conclusion of our dining at SeaWorld adventure. 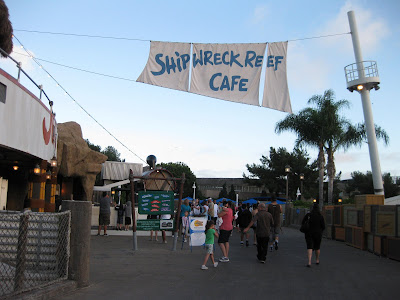 I was pleasantly surprised with all the food options at this cafe.  Up until this point, all the other restaurants seemed to feature mainly one thing: like fajitas, or ribs or pasta/pizza.  Shripwreck offered burgers, seafood salads, beef sandwiches, chicken tenders, and some other items.

If you dine outside, you can also dine next to Sea Turtles! 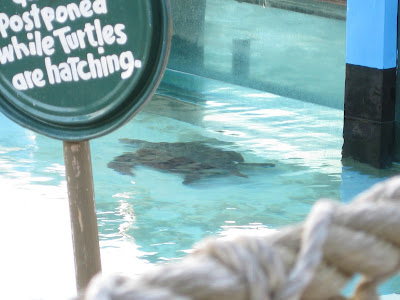 I started off with a bacon cheeseburger with fries, chocolate milk and a slice of chocolate cake. 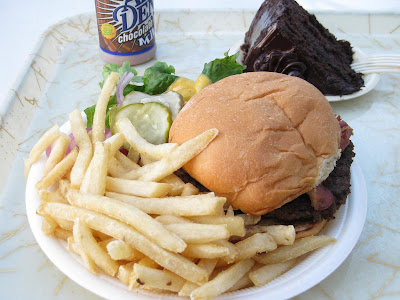 The fries are the same at each of the restaurants at SeaWorld, and I don’t really like them.  When they are really hot in the beginning, I can enjoy a few.  But after that, I don’t like how they taste.  They simply aren’t crispy enough.

The burger was too dry.  I only had a couple bites.

Boyfriend tried the beef round sandwich 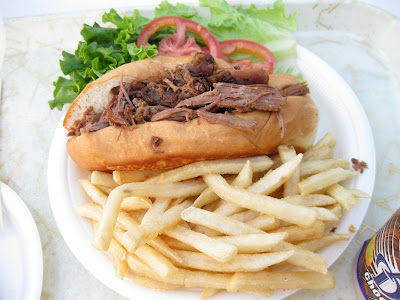 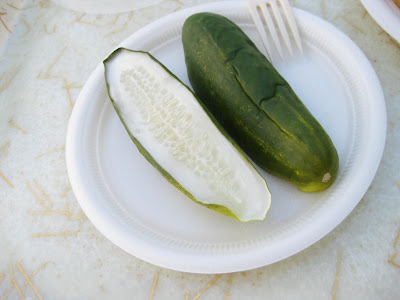 I don’t know what it is about their beef, but this was unbelievably salty, much like the beef fajitas I had previously. For his side, he got a giant pickle.

The lines weren’t long yet and since Shipwreck had other offerings, we went back for a second trip.  This time I got the seafood salad.  I couldn’t decide on a side or dessert.  I had gotten pretty tired of the same dessert selection after our first Sea World trip, so I opted for a shrimp cocktail, even though I knew my salad was full of shrimp. 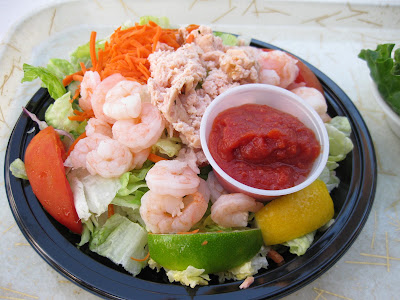 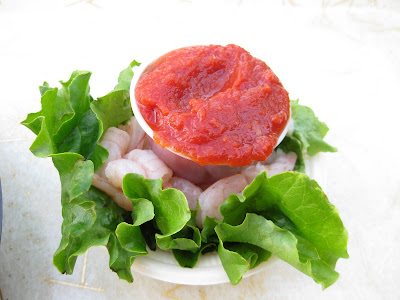 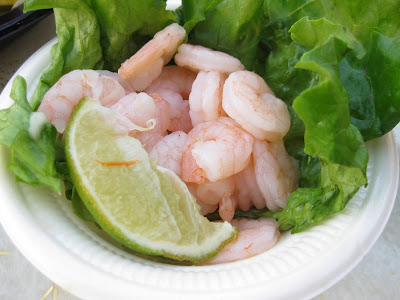 While the shrimp are quite small, they do give quite a few.  Cold shrimp with cocktail sauce, there isn’t much you can mess up here.  The salad consisted of the same cocktail shrimp, some tuna, vegetables, and more cocktail sauce.

On our first trip, we had tried to come here, but the line was really long.  This time it was much better. There are a few restrictions to what you can get with the wrist band.  One of the items you can’t order is a platter of baby back ribs, which is served at Calypso.  I did notice a Smokehouse sampler, And it comes with a baby back rib, pork rib, chicken, brisket and some sides.

Here are the desserts offered here, and at every other restaurant inside Sea World except Rocky Pointe. 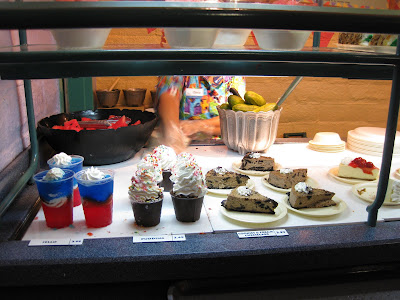 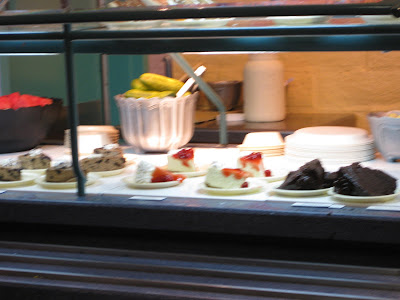 Here’s a shot of some salads: 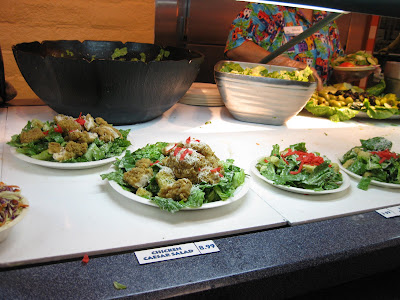 Boyfriend and I both opted for the sampler. 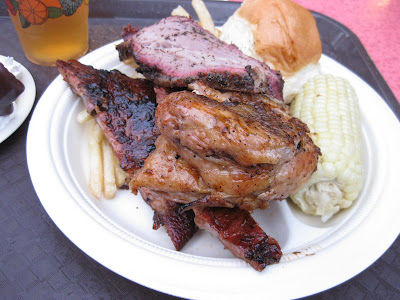 There was a lot of food on this plate.  I found the brisket to be way too salty.  The chicken was a little dry.  I really loved the baby back rib though!  I was pleasantly surprised by how good it was. 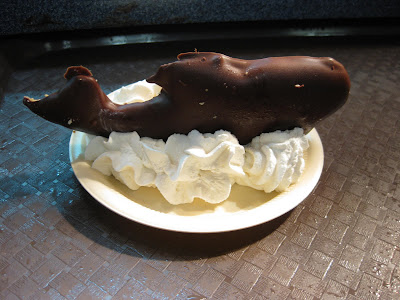 For dessert I got this shamu cookie.  It was a regular shortbread cookie dipped in chocolate, and sitting on a mound of whipped cream.

We enjoyed the sampler so much, that we went back for seconds.  By this time,the line was getting pretty long.  Now I know why this place is so popular.

We ended the night at Mama Stella’s.  We tried to go to Coconut Bay Cafe, but they were closed that day. We had previously gone to Mama Stella’s on our first trip and we knew we liked the sampler, so we went with that: 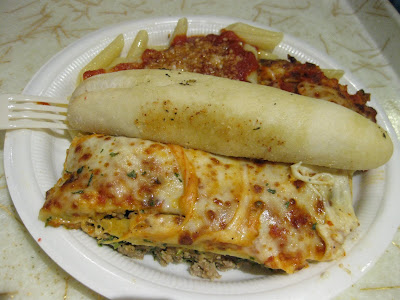 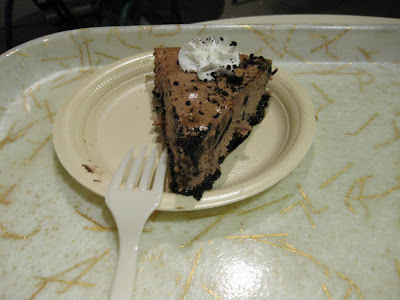 It came with a breadstick, pasta, cannelloni, and eggplant parmesan.  I also chose a slice of oreo cheesecake.

Boyfriend got a slice of pizza, but for some reason we didn’t take a picture.  The pizza was just okay.  Your typical school cafeteria type pizza. 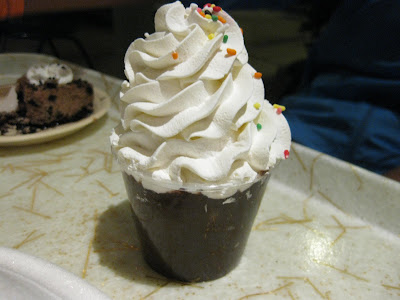 He also tried the chocolate pudding.

So that concludes Boyfriend and my dining adventures at Sea World. After our second visit, we were pretty much satisfied and didn’t have any desire to go back to the park just to eat Sea World food.  It was a pretty fun experience though!

5 comments on “Dining at SeaWorld Part 2”