Saturday after the artwalk, I had plans to take my friends to Hash House for dinner. I've been to Hash House for brunch, but never for dinner until now.  I thought that this would be a good place to take my friends who were visiting this weekend.  Good service, large portions of food, decent prices, decent food, fun environment.  My friends seemed a bit skeptical when I told them I was taking them to a place called Hash House.  The entire time we were at the artwalk they kept asking what kind of food was it, what kind of environment, etc.

Well, everyone ended up having a lot of fun at the Hash House and my friends were happy with my choice (whew!).

We started off the night by perusing the drink menu.  Boyfriend decided he wanted something alcoholic and got this pretty watermelon martini. 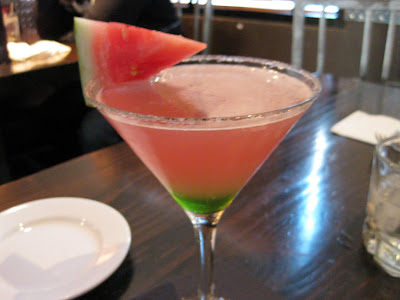 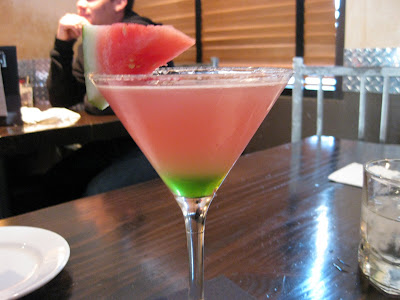 One of the things I like about Hash House is the variety of juices they serve, including guava, peach and tangerine.  I opted for a guava, but sadly, they were out. I ended up with peach, but it was so sugary that I couldn't taste peach at all.

My friends found this beer in a bag offering amusing.  This is the first time I've noticed it too. 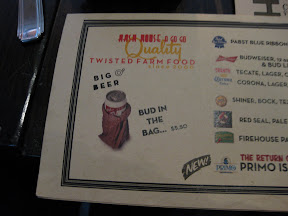 When we were ordering the food, Photographer friend was very concerned about the portion size.  He had seen a neighboring table with a plate enough to feed quite a few people, and was afraid of getting too much food.  I told him that the portions at brunch are pretty big, and probably dinner is the same.  The waitress was a little more vague.  She kept saying it was a "decent-sized portion" of food. He spent about five minutes talking to her about the portions before finally giving up.

Shortly after we ordered, a bucket of warm biscuits arrived. 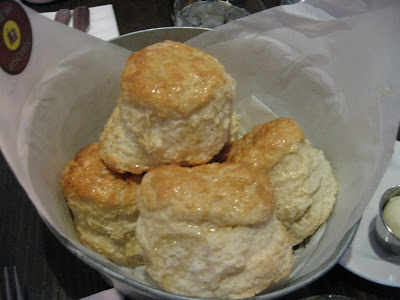 The biscuits at Hash House are huge, and taste great when served warm.  The outside has a sweet glaze.  Delicious!  Unfortunately, these are also quite filling.

One of my friends started off with a salad with cucumber ranch dressing. 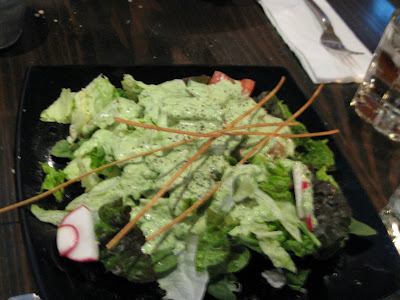 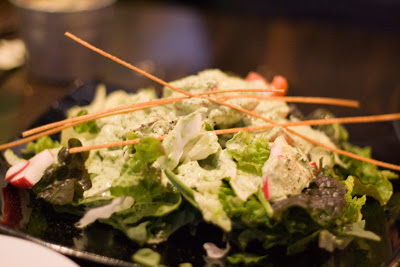 Photographer friend's entree arrived first.  It was a bit funny really.  He was most concerned about portion size, yet he ended up with the dish that was probably the biggest in portion and plate-size.  He had chicken bow tie pasta, and the bowl it came in is one of the biggest bowls I have ever seen. 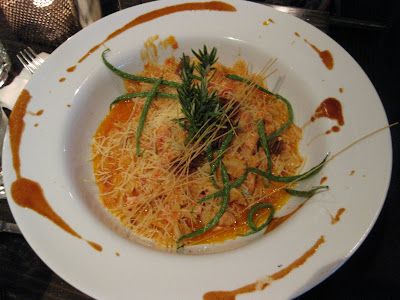 I don't think you can truly grasp just how large this bowl was, even with this picture.  We tried to put his hand in the picture to give you a better grasp of how big the bowl was. 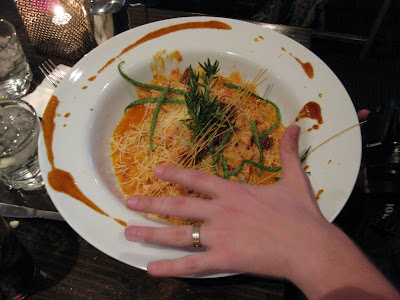 There really was enough pasta to feed at least three people.  The outside of the bowl was garnished with a chipotle sauce which Photographer friend loved.  When he asked the waitress about it, she immediately offered to bring him an extra side of the sauce.

I had been craving waffles for a while now, so I went with the Sage Fried chicken and waffles.  It arrived as a giant tower, held together by a stick that was going through all the waffles and chicken pieces. 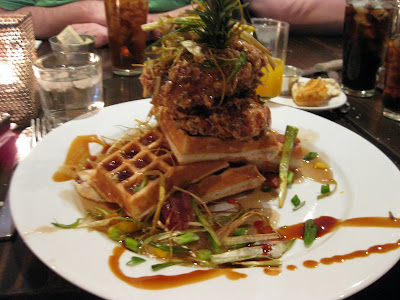 I was a little bit disappointed with the waffles because they were soft rather than crispy.  I like mine crispy.  Also I could have done without the sauce.  It was a sweet syrup that also had bbq sauce added to it, creating a salty taste as well, which I didn't really like with my waffles.  The chicken was pretty good.  Not your typical fried chicken.  This one seemed to be coated with corn flakes.  It had more of a baked fried chicken taste, but it went well with the waffles. 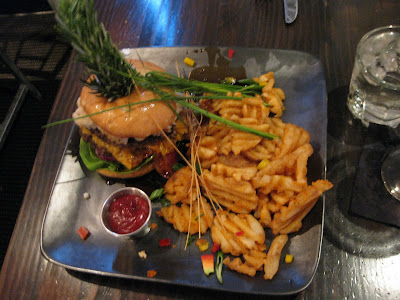 The burger was huge.  I couldn't fit an entire bite in my mouth because it was so thick.  The majority of the burger was made up by two thick patties, with mashed potatoes and bacon sandwiched in between. I love burgers that are mainly meat, so this was my kind of burger.  Add mashed potatoes and bacon which I also love, and it tasted even better.  However, I am scared to see the nutritional facts of such a burger.  The fries that went with it were well seasoned but were not crunchy enough in my opinion.

The service was great.  The waitress came by constantly to refill our drinks and waters. Everyone was pretty happy with their food and it was a nice environment to hang out with friends. Dinner is also a lot quieter of an environment compared to brunch and there isn't an hour wait like during brunch.