by Kirbie
Jump to Recipe
1035 shares

Learn how to make jiaozi (Chinese dumplings) at home. Once you try them, you’ll never want to buy the frozen ones from the store again. This post includes step by step photos to show you how to make and fold your own jiaozi. You can make a lot at once, freeze them, and then cook them whenever the craving hits. 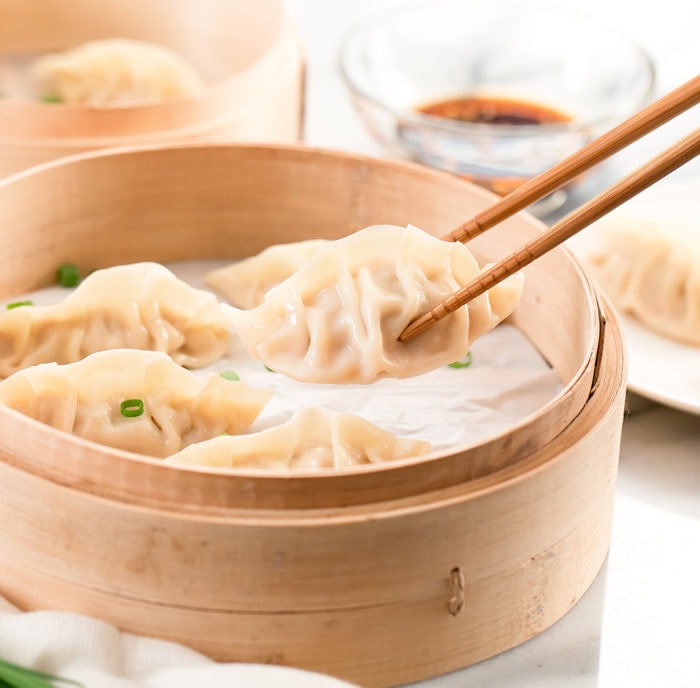 There are a lot of types of Chinese dumplings but the most classic one is jiaozi. Jiaozi are typically made with a meat or vegetable filling, wrapped inside a thin piece of dough, with the edges sealed. They are then either steamed, boiled, or pan-fried (potstickers).

Today I’m sharing with you the family recipe that I learned from my mom. I’ve been helping her make dumplings since I was a kid. I hope you enjoy these dumplings as much as my family does. 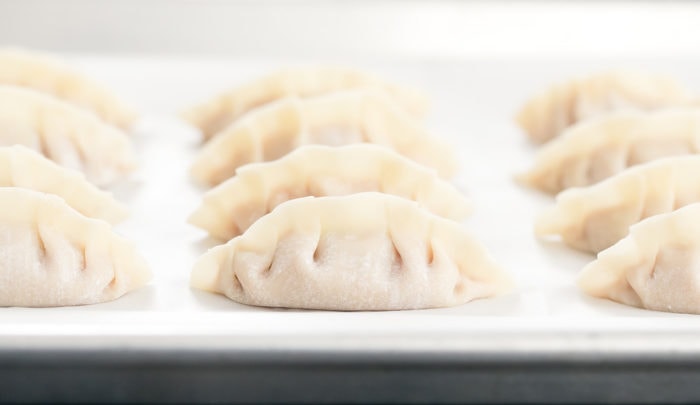 How to Make the Dumpling Filling

To make the filling, first you combine the ground meat with the water. This step is not something I see in a lot of recipes but adding water is key and does two things:

It may take some time for the pork to fully absorb the water so just keep stirring until the two come together.

Once the pork and water are combined, add the cabbage, soy sauce, oyster sauce, garlic, ginger, sesame oil, white pepper and egg. Stir until everything is well mixed. 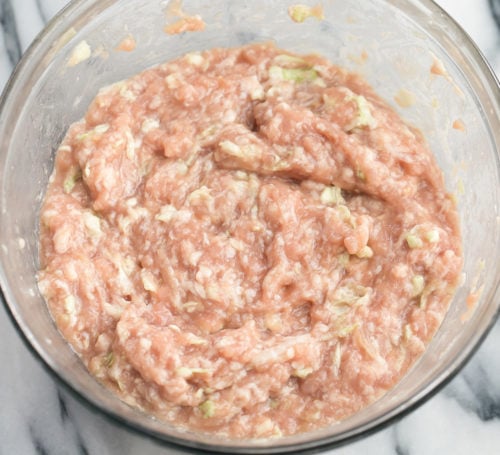 How to Fold Dumplings

It helps to have your dumpling ingredients set up to make things easier. So, have a stack of wrappers with a small bowl of water next to each other. Place the bowl of dumpling filling within arm’s reach.

However, if you want your dumplings to have a fancier fold, here are the steps to make a pleated fold, which is one of the most common presentations you’ll see for jiaozi. For this pleated fold, only the front of the wrapper becomes pleated. The backside stays the same.

Dumpling folding takes practice, so don’t worry if yours aren’t perfect – they will still taste delicious!

Once you get some practice you should try making my rose dumplings which use a different folding technique.

How to Freeze Homemade Chinese Dumplings

Once the dumplings are folded, any dumplings you do not plan on consuming right away should be immediately frozen and stored for later use.

How to Cook Chinese Dumplings

Once you’ve made your dumplings, it’s time to cook and eat them! Jiaozi can be cooked in several different ways: steamed, boiled, or pan-fried. 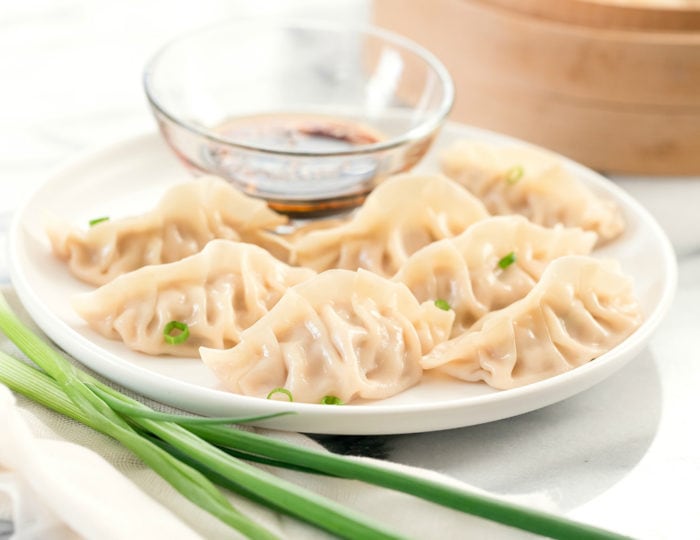 This is the method I most commonly use since it is fast and easy.

You can learn more about this method in my potstickers post.

How to Serve Chinese Dumplings

I like to serve my dumplings with dumpling sauce which you can buy premade or you can make your own. I make mine with soy sauce, rice vinegar, garlic, sesame oil, and hot chili oil and I’ve included the recipe in the card below.

Still have questions about making homemade dumplings? Here are some commonly asked questions, but if I don’t answer yours, be sure to leave me a comment below the recipe card! If you want to learn more about Chinese cooking ingredients and see more recipes be sure to check out my post about essential Chinese ingredients.

How do you know when dumplings are finished cooking?

Depending on how much filling is in your dumplings and the cooking method you use, the time it takes to cook them will vary so if you’re worried you can always open one dumpling to check for doneness.

Why did my dumplings fall apart?

There could be a few reasons why your dumplings fell apart:

What other dumpling fillings can I use?

The most common filling is pork and cabbage but there are many other variations. Some other popular fillings:

What’s the difference between jiaozi and gyoza?

Although they are similar, jiaozi and gyoza are two different kinds of dumplings. Jiaozi is a Chinese dumpling that’s been around for a thousand years while gyoza is a Japanese dumpling that came into existence after WWII. Gyoza was actually inspired by jiaozi after the Japanese occupied parts of China during the war. After, they created their own Japanese style of dumpling using a similar technique but with a thinner wrapper and different style of filling.

What’s the difference between jiaozi and wontons?

Jiaozi have a thicker wrapper and are eaten with a dipping sauce. They are usually folded into a crescent shape. Wontons have a thinner wrapper, less filling, and are usually served in broth.

If you’re interested in making wontons, I have recipes for Wonton Soup and Sichuan Spicy Wontons. 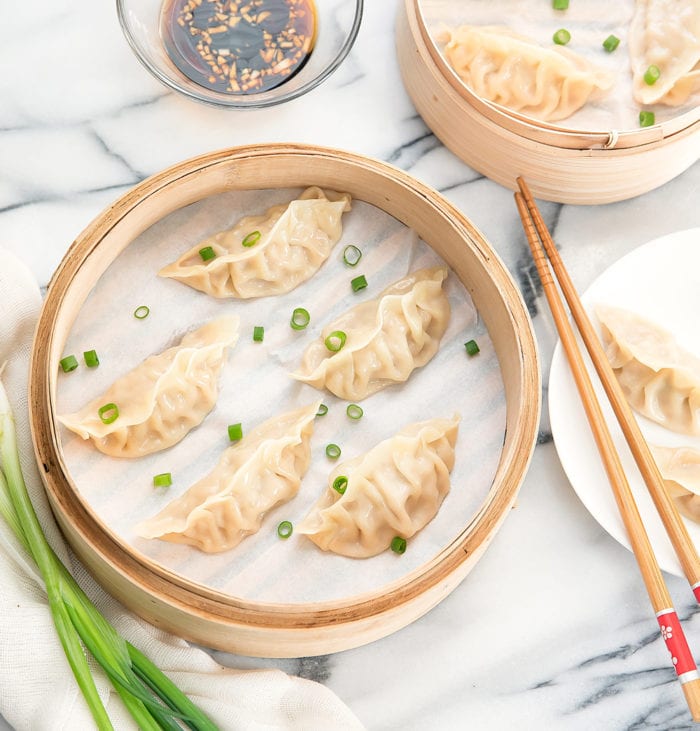 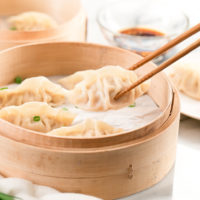 Servings: 52 dumplings
Prep Time: 1 hour
Cook Time: 10 minutes
Total Time: 1 hour 10 minutes
Course: Main Dishes
Cuisine: Chinese
Learn how to make homemade Chinese dumplings. They taste so much better than the frozen ones from the grocery store. You can make a lot at once and freeze them for whenever the craving hits.
5 from 4 votes
Print Pin Rate

Did you make this recipe?I'd love to see it! Mention @KirbieCravings and tag #kirbiecravings!
1035 shares
Posted in: Asian dishes, Chinese, Recipes
16 Comments // Leave a Comment »