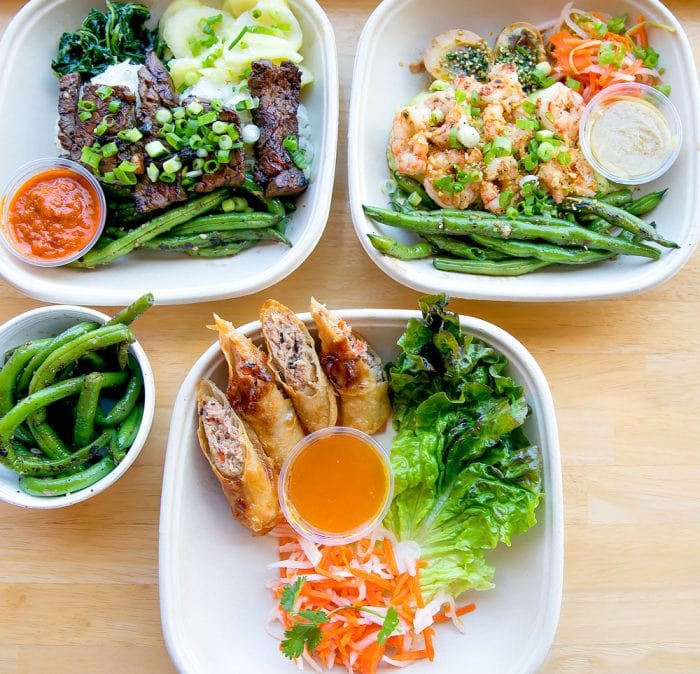 Nom Nom Bento opened recently and it’s quickly become one of our new favorite spots in San Diego. The fast-casual eatery serves creative Asian inspired bento boxes and was opened by Craig Jiminez, who is also the executive chef at Supernatural Sandwiches (another one of our favorites). 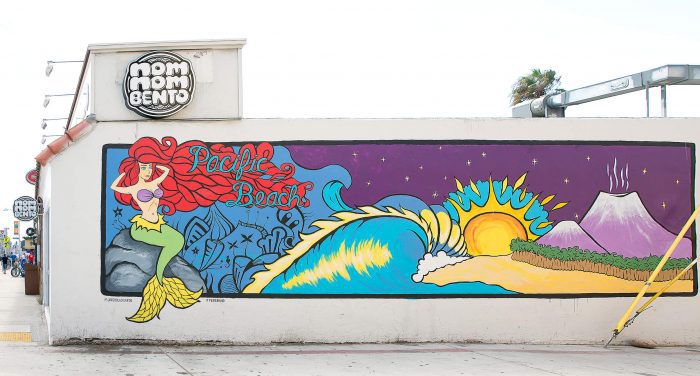 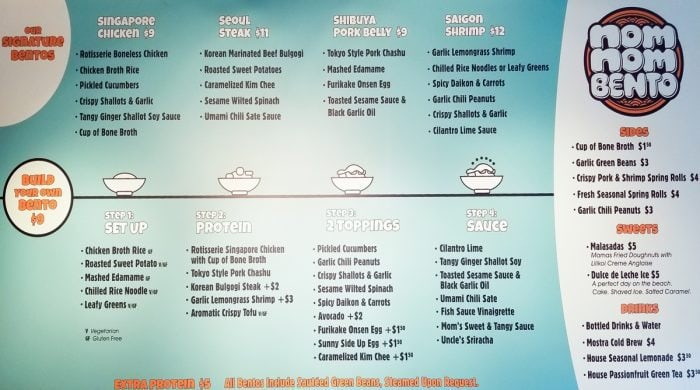 We came in really early on our second visit so I could get a few photos of the interior without people in the way. 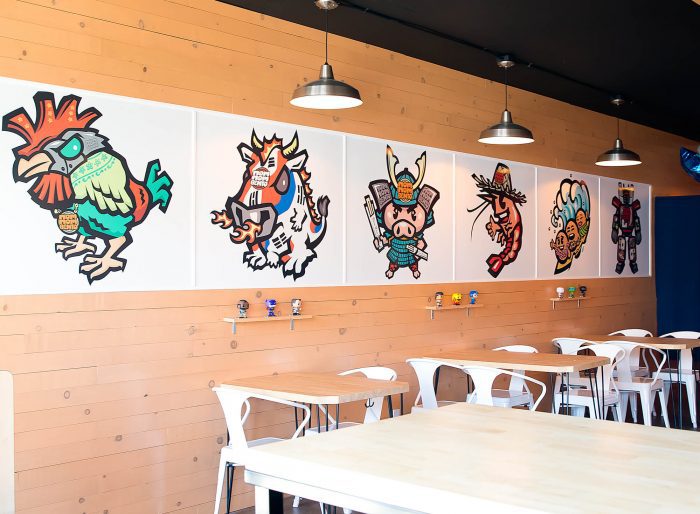 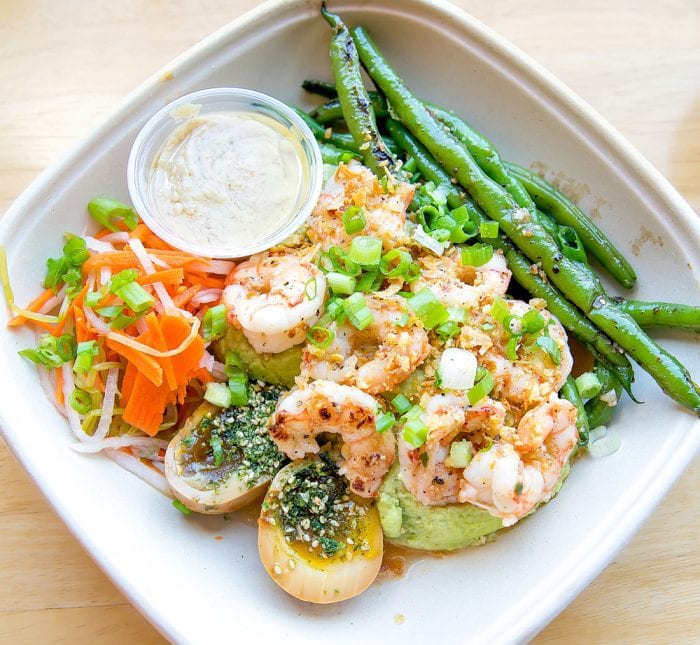 The mashed edamame is one of my favorite things I’ve eaten here. I’ve never had mashed edamame before but now I’m excited to try making my own. The texture isn’t quite as smooth as mashed potatoes, but it’s very creamy and light. 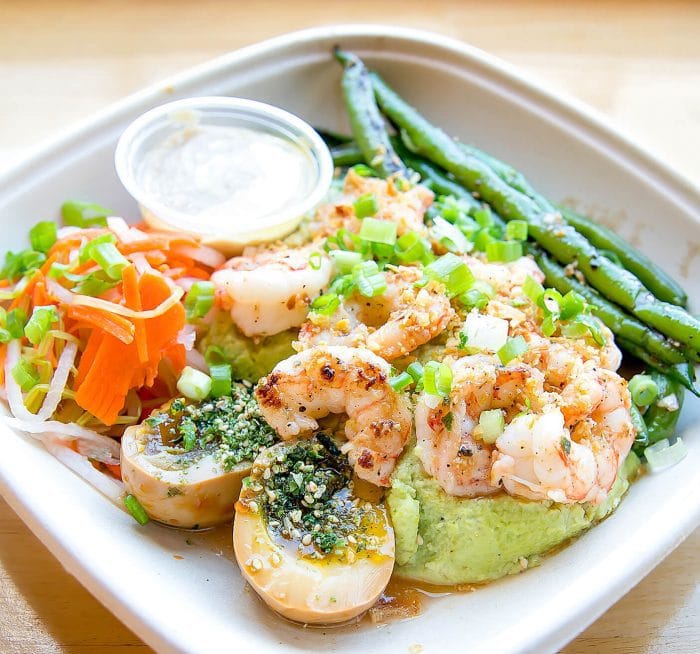 All the bento boxes come with sauteed garlic green beans which are also very enjoyable. The beans have a wonderful garlic flavor to them.

Side of garlic beans 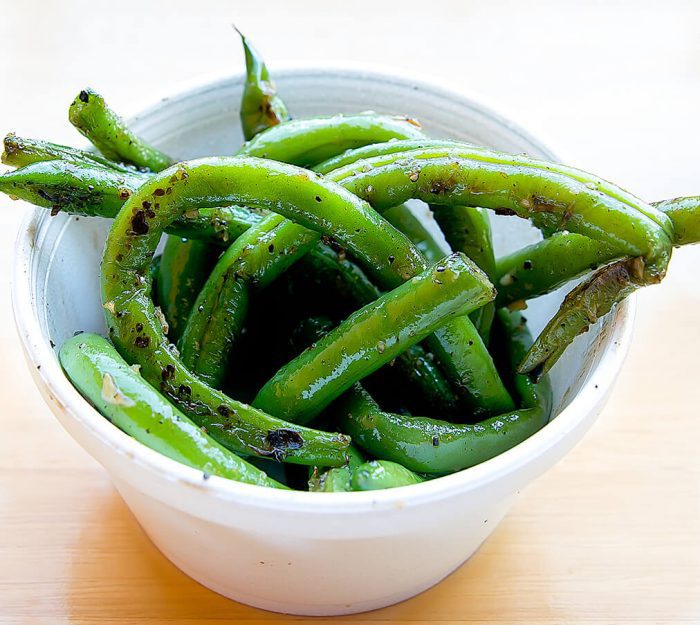 We like the garlic beans so much that we even got an extra side of them. I wish these beans were offered at Supernatural Sandwiches 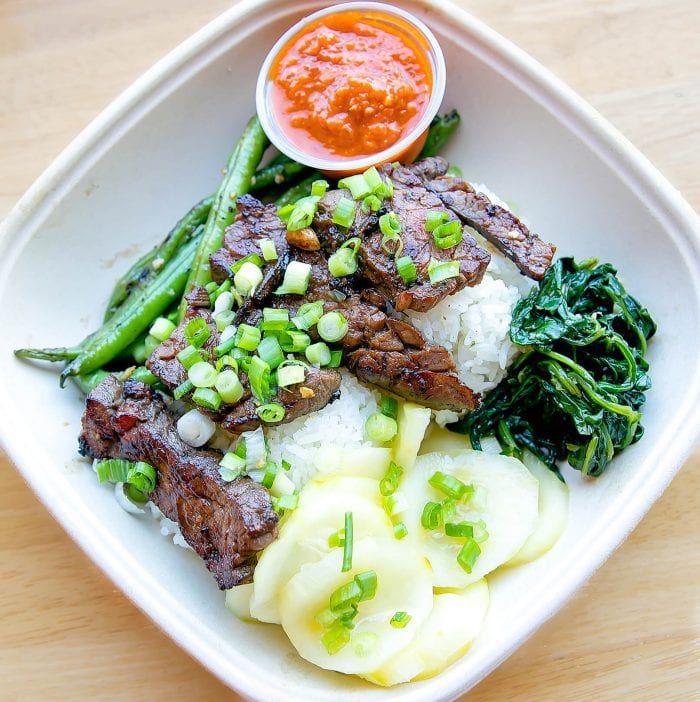 This was Mr. K’s build-your-own box. The chicken broth rice was wonderfully fragrant and I liked the firm texture of the rice. I found the bulgogi steak a little salty, but I like how tender and thick the slices of steak are. 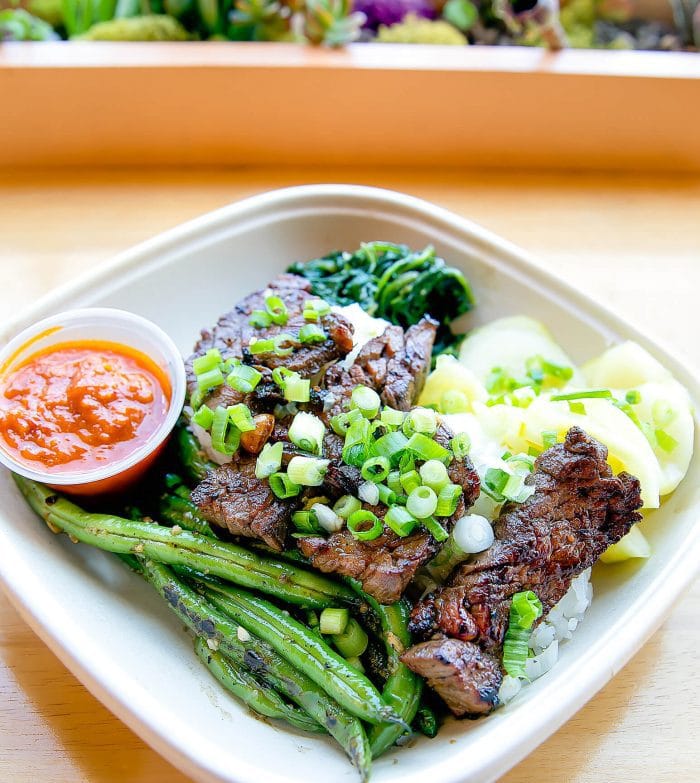 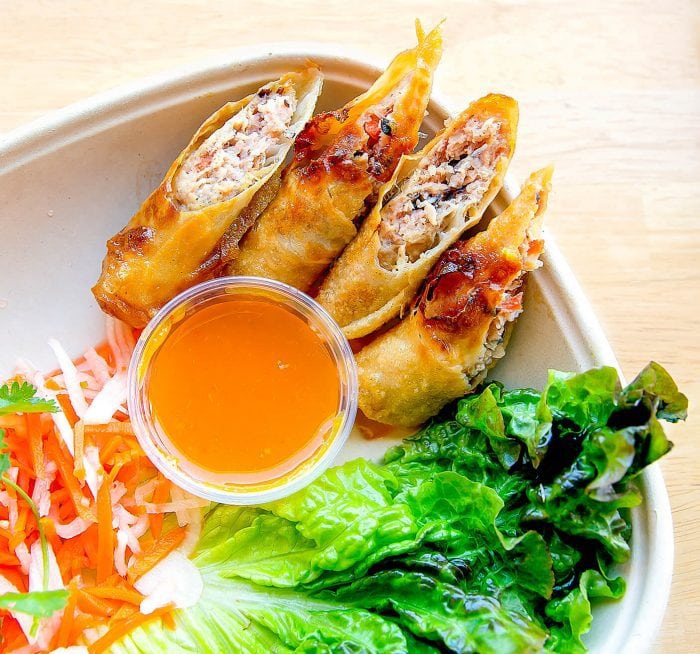 These rolls were nicely fried though I do wish the filling had a little more shrimp.

As I mentioned above, on our first visit we tried three of the four signature bento boxes because we couldn’t choose just two. However, we only stopped in to get food to-go. The food got a little jostled in the car and vegetables lost some of their color sitting in the sealed boxes and it was already getting dark when I took these photos, which is why they don’t look quite as nice as our dine-in visit. 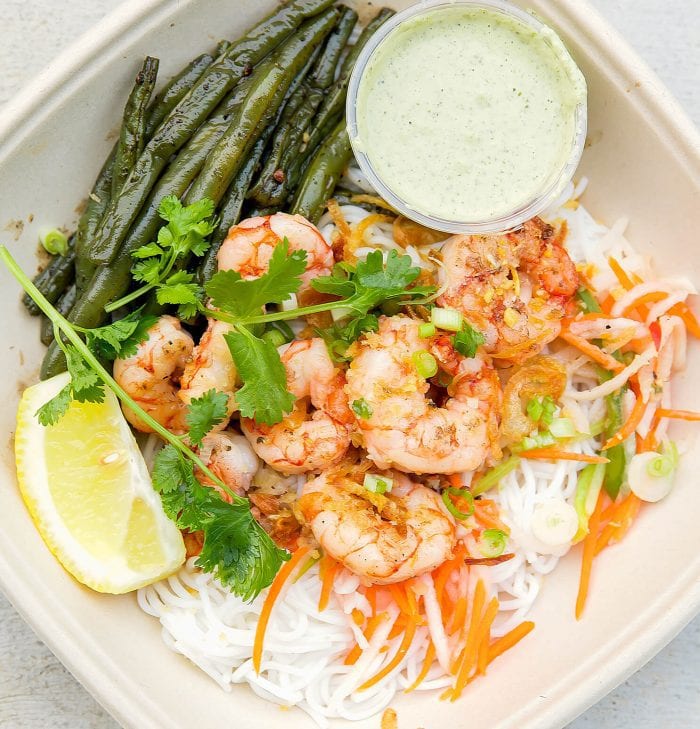 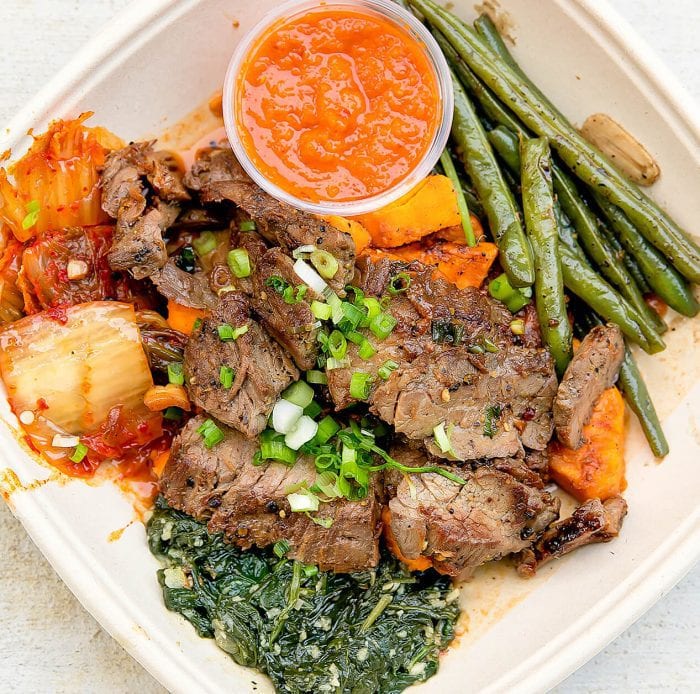 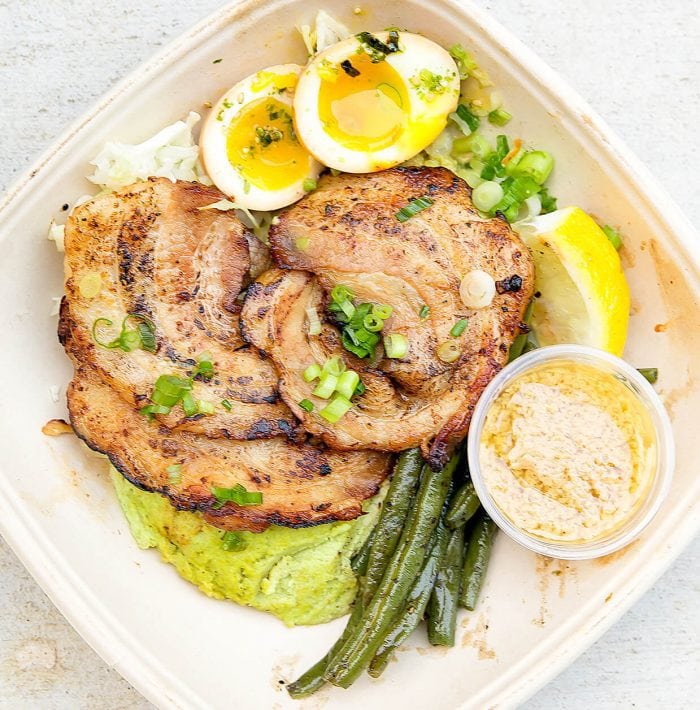 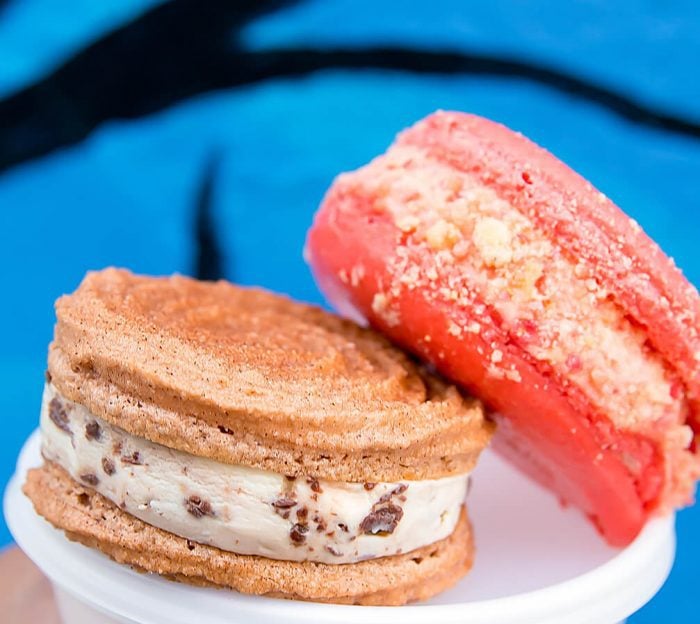 Next time hopefully we’ll also save some room to try their malasadas.

Overall, we’ve been impressed with the creativity and flavors of the food offered at Nom Nom Bento. We don’t often dine in Pacific Beach area as I don’t like dealing with the parking and traffic, but we’ve already visited twice in two weeks, which says a lot about how much we enjoy the food. The restaurant is also located just steps away from the beach.